The Third Course: Michael Winterbottom on "The Trip to Spain"

Michael Winterbottom blurs the line between reality and fiction with his “Trip” series, with Rob Brydon and Steve Coogan traveling through magnificent scenery, enjoying gorgeously prepared food, and needling each other, not always gently, about their talent and professional accomplishments. Brydon and Coogan use their own names and refer to real projects (in this third film, “The Trip to Spain,” they both have things to say about “Philomena”). But many of the details of their lives are changed and the other characters, including family members, are played by actors. In an interview with RogerEbert.com, Winterbottom talked about the lines between fiction and non-fiction and comedy and tragedy, why he doesn’t like jokes and his favorite of his stars’ impressions.

If you are going to change so many details of their lives, why use their real names?

I love films that play with or switch the versions of real events and real people. In this case it’s probably just simplicity of continuing what we’ve done before. It just felt like it kind of came out of their conversations. They had conversations about their career, about families, about their different views of the world and it just felt like it would be much richer and simpler if they were expressing those as themselves rather than trying to create a kind of character that explains who they are. We thought that it would be much freer, and funnier and actually engaging as well, playing the variations of themselves. I think it’s what a lot of comedians do anyway. With stand-up comedians there’s a big overlap between who they are really and the character they portray onstage. They’re talking and being funny and exaggerating but it overlaps very closely who they are.

Brydon and Coogan are very funny, as always, but there is a melancholy overlay to the film. Why do you include some sad and scary scenes in what is essentially a comedy?

The melancholy is just coming from two people at 50 who’re suddenly talking about 50 being a prime year but aware of getting older. I think they are talking quite honestly about their careers, their family and their hopes and in a way that hopefully people can recognize there’s always a slight melancholy to that once you get beyond a certain point.

That may be why they seem to be more comfortable in this one.

[Laughs] I’m not sure that it shows on screen but definitely making it was probably the most enjoyable in terms of their relationship. It is so tricky. The idea in the fiction that they have these different views of the world and that can be a conflict. In the real world they genuinely have their different views of the world but they’re not really in conflict. They recognize that both perspectives are necessary. Because what they’re saying actually overlaps quite closely to what they believe, that can be quite an interesting area when they move away from the lunch table then what bits hang over. It was definitely enjoyable to make so I hope it’s enjoyable to watch.

The food all looks so luscious. I love the shots in the kitchen with the sizzling pans and dots of sauce on the plates. Did you get to try it all?

For me the food part of the trip is before we start filming. We did our driving and eating then, especially in Spain, where we required a lot of routes and journeys because we were not sure exactly which way we would go. So we had a lot of great food in the pre-production. Unfortunately we’re filming while they’re eating so there’s often the sad sight of the crew and even me at the end of a meal and diving in and eating the scraps. 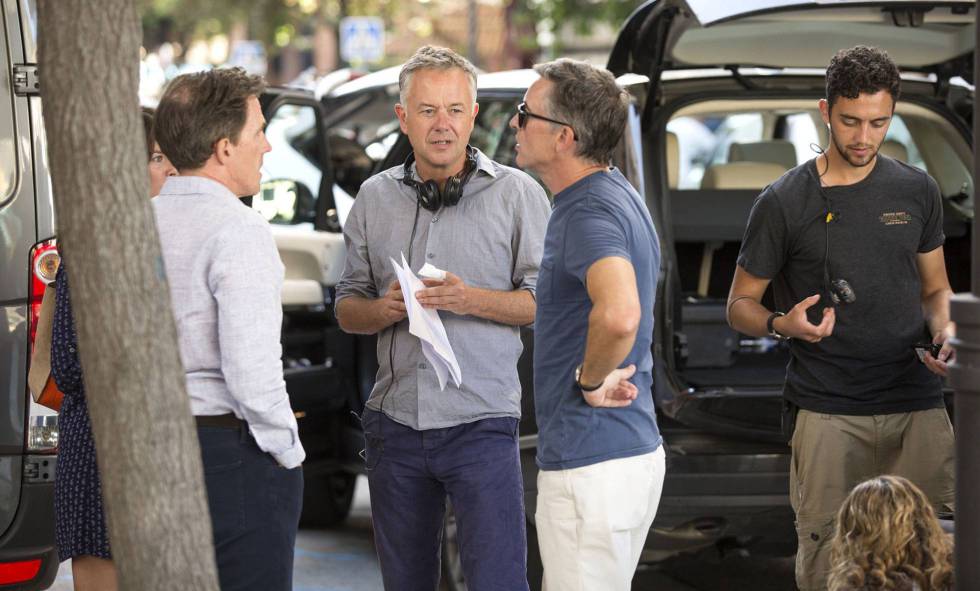 The film is so intimate and natural. I wondered how big your crew was and where you all were?

We have a very small crew. We started with only two cameras and we now sometimes have three. We try to keep the restaurant open so the kitchen is running as normal. They are told to behave as normal, which they really do, and we try and be discreet and keep out of their way. We bring actors into public spaces with ordinary people and we don’t try to control the other people.

Coogan and Brydon are becoming a pair in the tradition of great movie comedy duos like Hope and Crosby.

I’ve worked with Steve quite a few times over the last 15 years. He is very intelligent and he has a lot of energy, a lot of strong views about the world. He wants to be serious as well as funny. Rob is just as quick, very, very quick, great improviser. He likes to pick up on ideas and play with them. He says he’s just trying to be funny and enjoy life and he’s happy in his family. They have to do hours and hours of hard work to sustain just the shooting of it let alone the watching of it and I think what helps them is they are very similar; they share a lot of cultural references and social interests but they have very different attitudes towards life. So the whole idea is keep playing around with different topics and two different attitudes and I think that allows them to keep the energy up.

Rob says that as a complaint but I take it from Steve as a compliment. I don’t like the construction of a joke where you can see what’s coming. I’m a huge fan of Woody Allen movies, the mid-'70s films. He shows how things can be really funny without having to construct the film around a joke. Steve is much keener to inhabit the character, be honest about the character, be passionate about the character; genuinely wanting to explain about social issues or influences. Rob’s natural inclination is that as Steve is being serious and compassionate, Rob will try to find a way of making that funny.

I’m going to ask you a really difficult question; who does the best Michael Caine?

They’re both very good so I’m not getting into trouble by picking one.

All right, fair enough, then which is each one’s best impression?

My favorite is Mick Jagger and David Bowie.