The Ministry of Presence: Ben Lear on "They Call Us Monsters"

BEN LEAR'S DOCUMENTARY, "THEY CALL US MONSTERS," is the sort of film that sticks with you long after the credits roll and the lights come up. It centers on the lives of three teenage inmates in a juvenile hall who attend screenwriting classes. The possibility of these young people getting tried as adults and being sentenced to life in prison for crimes they committed before they were 18 could potentially be overturned by the proposed Senate Bill 260, which would give juvenile offenders in California the opportunity for a second chance. I was introduced to this movie through the Catalyst Forum at the Sundance Institute, and it moved me deeply. I thought it was so important on the issue of juvenile justice and reform that the Ebert Foundation donated a small amount to help with the film's social impact campaign once the picture was completed. I have no credit or ownership or financial interest in the film. It's just the sort of real-life tale that inspires audiences to help make a difference in the world.

Lear recently spoke with me via Skype and email about his background in music, his unbiased approach to framing the narrative and his own personal involvement with helping incarcerated youth.

You have a degree in music composition and penned the folk-opera, "Lillian," in which you sought to raise awareness about plastic pollution in our oceans. How did your music background help with the making of this film?

Approaching filmmaking from a music background has taught me that the "creative process" is the same no matter what form it takes. Process is process is process. Finding a theme, a story you wish to tell, and then being cut-throat and vigilant about throwing away whatever doesn't serve that story—writing and editing, essentially—it's the same between songwriting, orchestral writing and filmmaking. I didn't realize it at the time, but years of songwriting and performing had taught me how to follow a creative instinct, how to "kill my babies," how to listen to feedback etc., and most importantly, how to surround myself with the best possible people.

Did you contribute any of the music in this documentary?

Yes, I realized the important role of music in the film, and my music background helped me with the language to compose with Ari Balouzian on my instrument, the guitar. From both the making of "Lillian" and this film, it was revealed to me a pattern that I wasn't initially aware of—an interest in including some sort of social message in my work. I think that both works achieve a balance in that they hold their own as a piece of art while also contributing a larger message about the environment or the juvenile justice system. I like the idea of having a fundamental set of skills that apply to different media. You start out with the instinct to tell a story and work out the technicalities later.

What eventually led you to documentary filmmaking? And why did you choose this subject matter as your first film?

In early 2013, I decided to shift from music to filmmaking, which was actually my first love (they called me Ron Howard in middle-school). I reached out to Gabriel Cowan, who was an old friend and working filmmaker, with an interest in telling a prison story. The idea led us eventually to InsideOUT Writers, an LA-based non-profit that provides weekly writing classes in every juvenile hall in the county. After sitting in on a class in the Compound, where LA houses its juveniles tried as adults, I realized I'd stumbled upon a population of young people completely hidden from the public, never before represented on film, who defied every expectation I'd ever held around gang members and violent criminals. It was impossible to reconcile their age and maturity with the seriousness of their crimes. Upon learning about SB 260, a California bill, which would give these same kids a second chance, I saw an opportunity to gain access and let them tell their own story. I also wanted to introduce these young people to the very legislators who'd be determining their fates without otherwise ever meeting them. 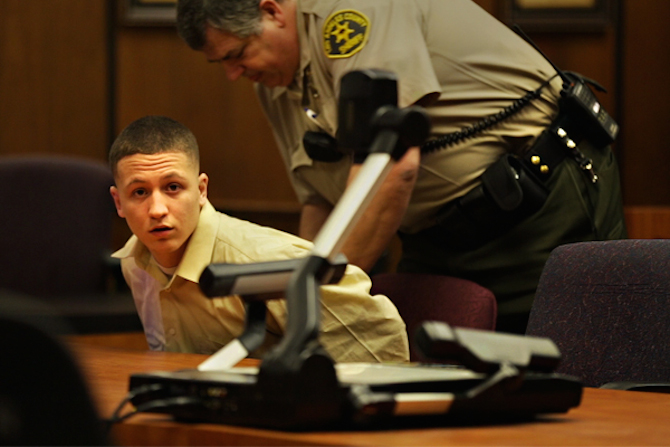 What is it about someone younger than the age of 18 that makes it inappropriate to sentence them to life in prison or the death penalty for a crime they commit at that age?

This is a very important question. To punish someone for the rest of his or her life for a crime committed under the age of 18 ignores the scientific fact that "kids are different from adults." The prefrontal-cortex doesn't fully develop until our mid-late 20s, making it impossible to know for certain who a 14-year-old will become ten years later. To deny him/her the opportunity to earn a second chance as a chemically new person seems cruel to me. This science has influenced a handful of supreme court decisions, which have subsequently mandated states to change their laws.

Now, these are my personal beliefs. It was very important to me that the film does not hammer you over the head with them. Because, yes, the science is real, but so are the heinous, irreversible crimes they committed. The victims, who will never walk or take a breath again. Determining how to treat these young people is an incredibly difficult task that requires serious, individual thought. Everyone needs to make up their own minds on this one!

Your film achieves a surprising balance in that you don't sugar coat what the juvenile offenders are guilty of. In fact, you show how one of the victims will have to live with the consequences of their actions. What thinking went into that formulation?

I have to give credit to Sasha Alpert, one of the producers. She helped the project enormously. When Sasha came along with the support of her company, BMP Films, she did the opposite of what you would expect any large production company to do—she challenged me as a director to make the film more thoughtful, more nuanced, more interesting. Most importantly, she pushed me to reach out to the victim of one of the boys' crimes. I had always wanted to tell the victim's side of the story but to be honest, I was nervous to actually make contact. To tell this woman, who would be handicapped for the rest of her life, that I'm making a movie about the man who put her there. But, of course, that was exactly why it was so important to include her—to balance that story. To ensure the film is, like Sasha urged, more thoughtful and nuanced. Unbiased.

What is your personal approach to teaching writing to inmates and what have you learned from it? Why did you subsequently become involved as a member of the advisory board at InsideOUT Writers, as well as an ally member within the Anti-Recidivism Coalition?

Since making this film, I have started teaching a weekly InsideOUT Writers class in the same Compound where I shot the film. The most valuable teaching lesson I learned is the importance of being emotionally honest. These guys have an unreal bullshit detector. The second you walk in, they read you like a book, and that book better be honest or they won't respect you. So long as I'm honest with them, and I don't make promises I can't keep, they can think I'm strict, nerdy, super white, rich, whatever, but they will still vibe with me because they know I care.

The second lesson is consistency. I have shown up before without paper, without pens, without a lesson plan and, god forbid, even without snacks. But at the end of the day, the real act of service is your presence. Just showing up for them. Javier Stauring, a leading restorative justice minister and advocate, calls it, "the ministry of presence."

How many inmates did you start out filming and how did you eventually settle on the ones highlighted in the movie?

Originally we had petitioned to film twenty young people, half of whom were under the supervision of one juvenile court judge, who said "no" off the bat. The other half were being tried as adults and so were under the supervision of individual criminal court judges. Some said "yes," and some said, "no." We ended up with five, which quickly whittled down to four, then three—Juan, Jarad and Antonio. I find it fascinating, in retrospect, that the only reason we were able to film them at all was because they were caught in this strange loophole of being juveniles in adult court. If they weren't being treated as adults, we would not have gained that access. 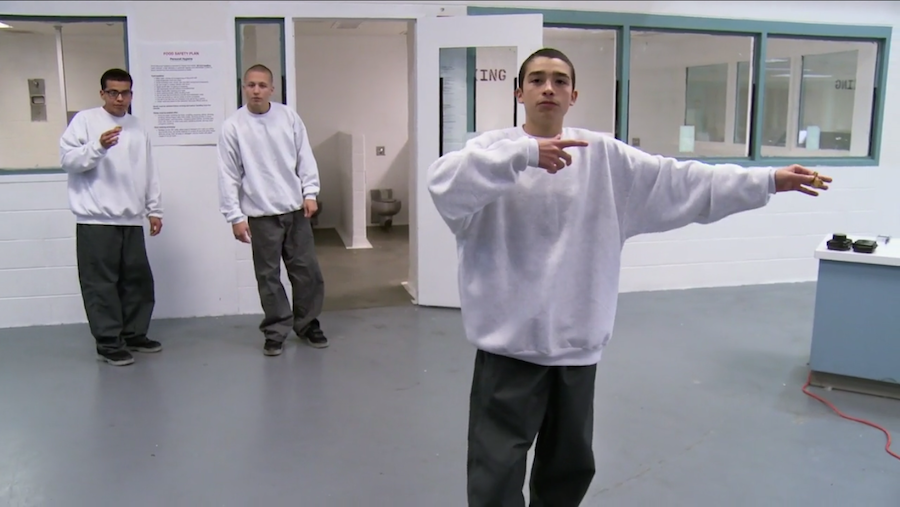 How did you go about shaping the film's structure with editor Eli Despres? What led you to decide that clips from "Los" (the film based on the script written by the incarcerated young men) would be incorporated throughout the picture? And how were actors Nate Corddry and Nora Kirkpatrick recruited to act out scenes in the Compound, while under the kids' direction?

Eli and I edited the film on and off for a year and a half. And in that time I am convinced I received the greatest filmmaking master class of all time. I can't speak more highly of Eli. I love his sensibilities, his sense of humor, his heart. I hope to work with him forever.

Nate and Nora were friends of Gabe Cowan's and were super excited to participate in the project. Some of my greatest memories shooting the documentary were watching Juan and Jarad come to life directing the actors. It was the closest they came to forgetting where they were. And that's what it was all about.

What do you hope will come from getting this film out in the world at this time?

First I wanted to show the shared humanity of the young men whose lives we are observing. I got to connect with them in ways that at first I wouldn't have thought possible. But it seems that the more barriers you shatter to connect with someone, whether those barriers are race, age, or socio-economic status, the deeper and more visceral the connection. You cross that bridge and step into the unknown. But I was also asking them to step out of their zone of comfort and through storytelling, imagine how their lives could change.

I am also hoping to raise awareness about these issues because a lot of people don't know that juveniles can be tried as adults. So this film can serve as a conversation starter. I would like to get it in front of legislators in cities and states that still haven't changed the laws to allow the possibility of probation and move the needle forward.

And finally, I hope that more people will become inspired to go volunteer at their local juvenile halls. We need more volunteers across the country. One of the primary symbolic differences between the juvenile and adult correctional systems is that the juvenile court and hall are supposedly rehabilitative, whereas the adult correctional system is punitive. I am hoping we can achieve real rehabilitation with more programs like this.

"They Call Us Monsters" opens Friday, January 20th, at the Gene Siskel Film Center in Chicago and the Village East Cinema in New York. Visit the film's official site to find more venues where it is scheduled to screen.