The Comedy Process: Adam Scott on “The Overnight”

It makes perfect sense when Adam Scott admits that he grew up watching Steve Martin and Albert Brooks. The star of “The Overnight,” now in theaters, and “Parks and Recreation” has a similar, deadpan, intellectual comedy style. In his latest, he plays half of a couple (with Taylor Schilling) who has a life-changing night with a new pair of friends (Jason Schwartzman and Judith Godreche) that includes a surprising amount of bad behavior and male nudity. Patrick Brice’s comedy has earned raves since it premiered at Sundance and is expanding around the country over the next few weeks. Scott was recently in Chicago, and, as it so often does after the publicist introduces me and says RogerEbert.com, the conversation opened with a discussion of the legend himself and what he meant to Scott:

ADAM SCOTT: I’ve always been a sort of movie nerd of sorts because it’s all I ever thought about or cared about as a kid growing up. So I would read Roger Ebert’s books. Every year they would put out the compilation. I remember his review of “Dead Poets Society” really changed the way I thought about movies.

He didn’t like it! Well, it was a very mixed review. And that movie really affected me in a HUGE way. Then I read his review. I remember exactly where I was standing in the book store reading his review. He used the word “puncture.” He said that Robin Williams punctured the character by doing his John Wayne routine. And I remember thinking, “You know what? He’s fucking right!” I would then repeat that to people. “I feel that Robin Williams punctured the character…” So funny. It changed the way I thought about it.

A lot of people’s favorite Roger reviews are ones that they disagree with but his writing is so strong. Do you think the idea of not puncturing character with over-performance influenced your acting perhaps? You’re an understated actor and comedian.

Probably. Remaining true to the thing. And who knows? Maybe Robin Williams didn’t want to do that. I could see a studio insisting that it be a part of the thing. Now, looking back on the movie, I kinda think “Yeah, it punctures the character, but who gives a shit?” It’s a fun scene. And what a brilliant movie. But, as a film critic, you have to take stuff like that seriously. And the thing I always liked about Roger Ebert and his writing was that he would judge a film on its merits and what it was setting out to accomplish and how well it did so. There’s a lot of critics nowadays, one in particular I can think of, who really bother me in that if they were a food critic and their favorite meal was a hamburger, they would criticize other meals for not being a hamburger. They wouldn't critique a plate of spaghetti as a plate of spaghetti but they would critique it as to why it isn’t a hamburger. For me, that’s not film criticism. That’s not Roger Ebert. That’s not Pauline Kael. Forcing your very specific tastes on a movie is not film criticism.

Roger wasn’t afraid to give an action movie 4 stars if it accomplished what it set out to do.

I know it! That’s why I admired him. What are its goals? And how well does it accomplish them? 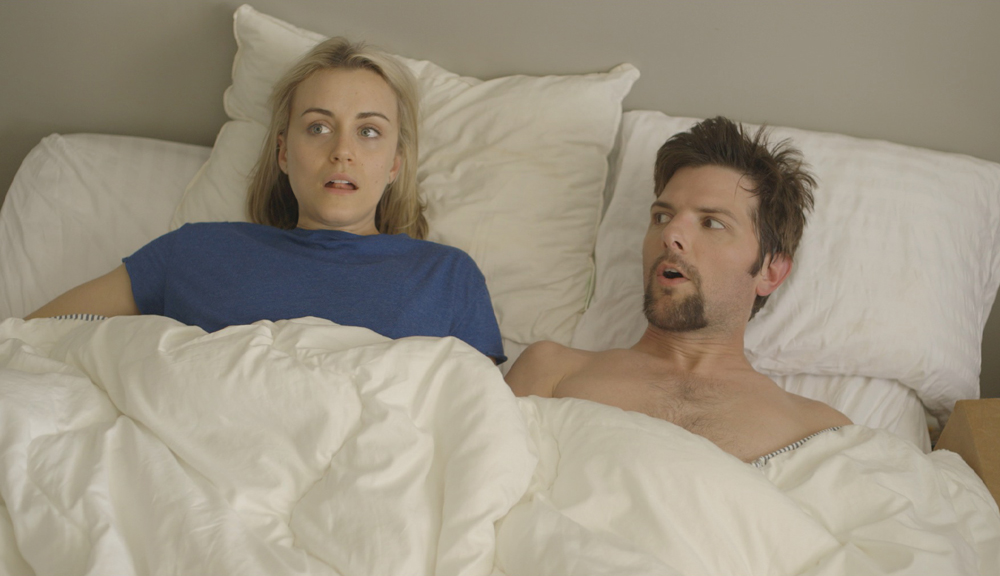 Let’s talk about “The Overnight.” When you get a script that features this much full frontal nudity for your character, do you immediately question how that’s going to be done? Is that a concern?

YEAH. Very much so. It was one of my first questions. He was like, “Yes, prosthetics.” You would have to get a giant-dicked actor and a teeny-dicked actor. That was a concern. David Wain actually put us in touch with a good prosthetics guy because Joe Lo Truglio had his prosthetic penis in “Wanderlust.” He did a great job and for a great rate. Got the dicks.

What attracted you to the script originally?

I thought it was really funny but also touched on something interesting in that when you get married and have kids that through the need to be a rock for these little people, you forget to change. You can still evolve and reinvent as a person, shed a skin every once in a while. These people are really due for it and they don’t really know it and then this night sort of happens to them. My character in particular grows up a lot in a period of a few hours. It’s really interesting.

It also taps something truthful in how difficult it can be to make adult friends.

Why do you think that is?

I think you get busy and the ceiling gets lower and lower for time to make to friends. The only places we make friends now are through work or children because that’s all we do. I really did relate to that as well.

How much input does Patrick give you in terms of script work in advance or improv on the set?

We did improvise a lot. Patrick didn’t use all of it nor should he have. I like improvising a lot. I think it’s a really healthy, fun thing for the actors. It keeps everybody alert and alive. They feel like they’re contributing and it’s very collaborative. And you get great bits that you might want to use in the movie. You never know what’s going to come out of improvisation. Sometimes you’re doing a scene for a while and it can get kinda stale. There are a lot of improvised bits peppered throughout. The one thing that comes to mind is the end of the movie when I’m saying something about “The Beach,” the Leonardo DiCaprio movie, and I was throwing it out there as a dumb thing I thought of and then Jason came back and tied it back into the movie and his character. That’s how good Jason is. He’s so fun to improvise with. And it’s in because it’s so funny and random. I enjoy that. It’s a healthy thing. 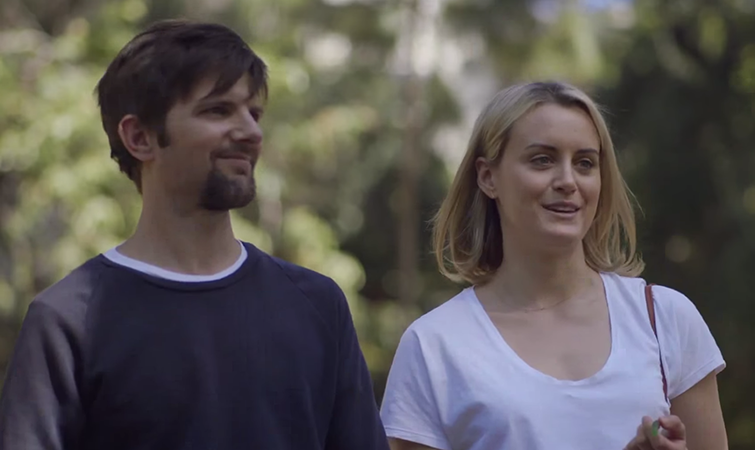 Is it an important part of your comedy process on every film?

Well, I’ve found it to be, since I started doing more comedy, sort of a vital thing to do. Even with the more dramatic scenes in the movie I found it really helpful.

So you dramatic improvise as well, like the more intense fight scenes with Taylor?

Yeah. The scene in the bathroom. Little bits here and there. Nothing…

When most people think of improv, they think “Line-o-Rama” and pure comedy, but you’re saying it’s a healthy dramatic tool as well.

Right. I think it’s healthy to just say it. You don’t have to use it. It’s healthy to get it out. That’s what’s so great about editing. You can use whatever you want.

How much background do you do? For a movie like this where we’re only with these characters for 24 hours, do you and Taylor work out back stories to help ground your characters?

We had no rehearsal on this movie. We barely knew each other. Taylor and I had lunch once. She’s terrific. She’s great. I think we both knew who these people were and the kind of people they were. We talked a bit about the relationship. But I think everything is pretty clearly mapped out and the script is pretty clear. We shot the movie in 12 days.

So it’s a lot of luck that you have so much chemistry and that it works. You never know.

You never know. And I think sometimes weeks together rehearsing is going to overcook it and all of your great stuff is going to be on the floor of the rehearsal room.

Do you think sometimes quick shoots like this force you to become more organic and instinctual than to overthink it?

That could have happened easily here with no wiggle room in a 12-day shoot. You just have to trust Patrick?

I think we trusted Patrick, but you never really know until you’re there. Naomi and I really felt like the script was strong and the cast was great and we all know what we’re doing, so let’s just shoot it and see what happens. If it doesn’t work, it doesn’t work. We don’t have the luxury…with a movie like this and this schedule, I tend to think that if you have the actors and the script is good and the director knows what they’re doing, just start shooting. Once you find it, move on. It’s not like it was a 130-page script. We even finished early some days. It ended up being plenty of time. 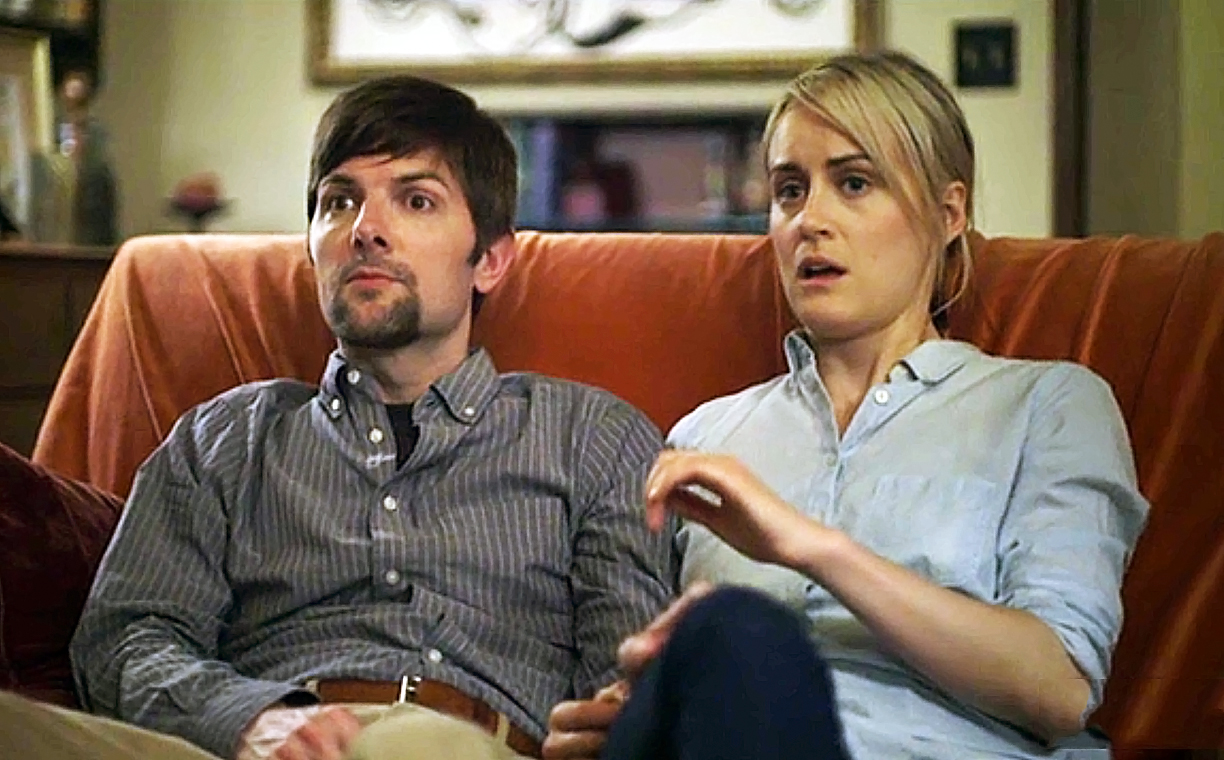 You said “have the actors.” When you’re considering a project, are your collaborators an essential concern?

What’s more important—the script or who you’re going to be working with?

I don’t know. That’s a good question. The script is probably the most important thing.

Oh, for sure, then yeah. Absolutely.

I guess what I’m saying is do you think you get as much from your cast mates as you do from the page?

Yeah. (Thinks.) But if it’s a giant TURD. If there’s a bunch of great people signed on and it’s a giant turd, you have to wonder what is happening here and how much are they paying us? But that doesn’t really happen. I tend to trust in good people.

Who do you think is funny? Who makes you laugh?

There are so many funny people right now. A lot of people make me laugh. My favorites growing up were Steve Martin and Albert Brooks and David Letterman. They still are. Right now, Hannibal Burress. I think Seth Meyers is doing an incredible job. Poehler, of course. I just saw “Inside Out” and it destroyed me, and was very, very funny.

Do you miss “Parks and Recreation”?

A few minutes ago you mentioned when you started getting more into comedy. Was that an active choice to transition into that genre?

No. As a fluke, I got the “Step Brothers” role, and that sort of ended up pushing me in that direction. I was setting out just to get a great job. And I got it. Someone else had that role and they had a different commitment, so they had to drop out and quickly re-cast and I got it. I didn’t know what I was doing when we made that movie. It was like learning to throw a javelin at the Olympics. Those guys are the greatest. And so nice and so funny. From there, I started seeking out comedy more often and it was fun.

Do you see yourself ever shifting back to drama?

I don’t know. I kind of take it on a project by project basis.

Not really. I try to find things that I find interesting at any particular point.