The Place: A hotel suite in downtown Chicago.

The People: Actor Geoffrey Rush, the Oscar-winning star of such films as "Shine," "Shakespeare in Love," "Quills," "The King's Speech" and the "Pirates of the Caribbean" saga, 13-year-old actress Sophie Nélisse, whom you may have seen in "Monsieur Lazar," and Brian Percival, the British director who took home an Emmy for his work on a little show known as "Downton Abbey."

The Subject: "The Book Thief," the big-screen adaptation of the international best-seller by Markus Zusak about an illiterate girl who grows to understand the importance of words after being sent to live in a small town in Germany that is falling increasingly under the thrall of Adolph Hitler. Nélisse plays Liesel, who is separated from her mother and sent to live with ordinary couple Hans (Rush) and Rosa (Emily Watson). Despite not knowing how to read, Liesel steals a book and when Hans uses it to help teach her to read, it unlocks something within that allows her to understand the power, both good and bad, that words can have over people.

After screening the complete version of "The Book Thief" for a public audience for the first time the night before at the Chicago International Film Festival as part of its entrance into this year's Oscar derby, the three sat down to talk about the film, the importance of filming a movie of this type in Germany and the challenges of translating the story from the page to the screen.

A lot of the movie hinges on the relationship between Hans and Liesel—the film is set against this epic backdrop but it is this intimate relationship that develops that is most important. Can you talk about this whole father-daughter aspect and how you two created it together?

Rush: I am pleased that you think of this as an epic because yes, it is about a very well documented period of history but for me, the fact that it is experienced through the eyes of this young girl who is grief-stricken and by setting it in this small average German town, it felt very fresh to me. You got to know people in the street as she does—she gets to meet her new parents, she gets to meet Rudy, the boy next door, and his parents and the people down the road—and there is a communal quality to that. I think that something emerges with Hans. Maybe there is an instinctive emotional intelligence to him—he is a simple guy but he has that quality because he likes music and painting and he doesn't want to join the Nazis—and he senses that in her. We let that unfold quite organically because we shot all the kitchen scenes on a studio set for the first month, so we were able to cover all those connections quite early in the shoot. It was a good way to discover how Rosa and Hans are with each other and how they are now with this new child. We didn't do the bedroom scenes until the end of the shoot and they were all the big emotional scenes.

One of the major themes of the book is the power of words and language, something which is easy enough to convey in print but harder to put across in a primarily visual medium like film. How did you go about trying to translate this notion into purely cinematic terms?

Percival: The way to translate that is to show the impact that those words have on Liesel. Words can be used for good or for evil and we see her discovering that as she begins to put words together with Hans. Then she gets her hands on that book and she gets more of a sense of what language is and how to use it. It isn't until Max comes along and opens her mind to seeing different ways of looking at the world. We had to illustrate the power of words through her actions and how she begins to see the world. It really has to be shown through their impact on her and ultimately, she goes from being illiterate at the beginning to becoming a novelist at the end.

Rush: Those are great visual images—to be able to see "Mein Kampf" being painted over and then writing her own story over it is pretty fresh stuff. 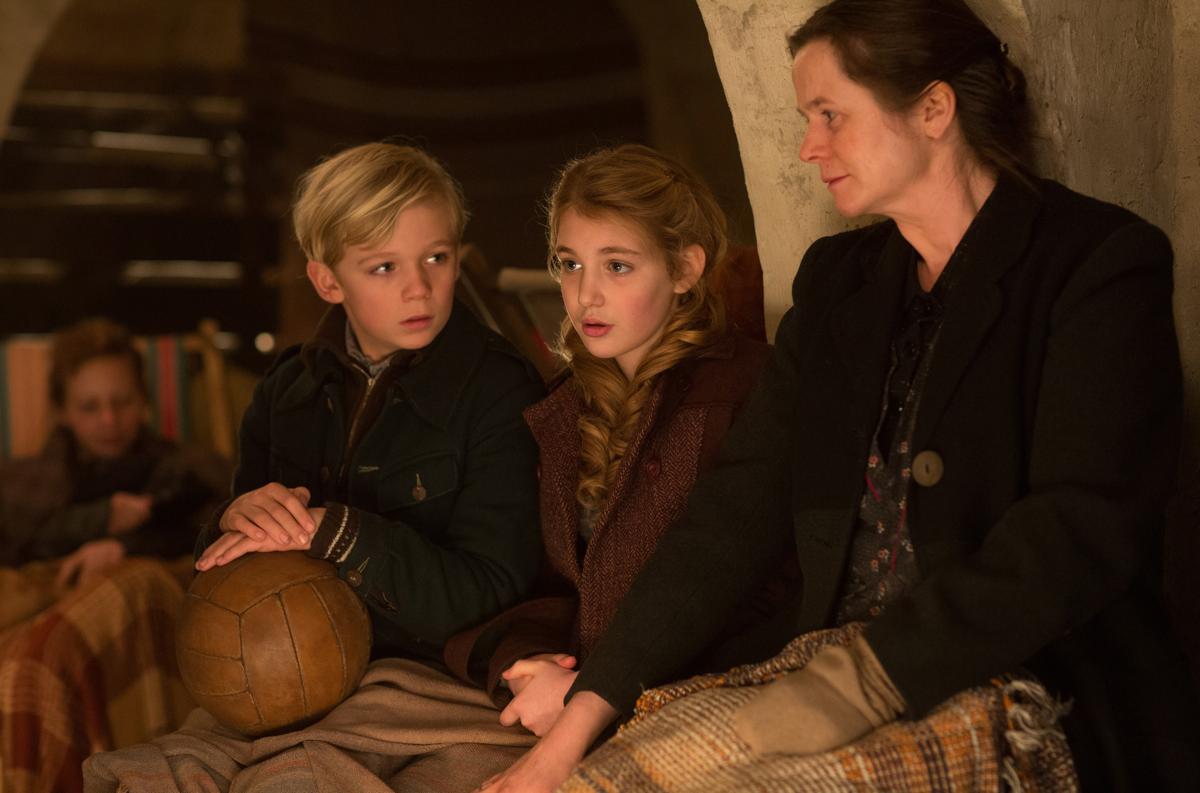 The character of Liesel certainly goes through a lot of things throughout the story that change her and she is a different young woman at the end than she was at the beginning. How does this compare to where you are in your own life—do you feel any different now that you are starring in a big movie?

Nélisse: Not really. I think that doing a movie might change the direction of my life but I want to stay grounded and not become a superstar or a princess because of this—I want to stay a little girl for as long as possible. I find it interesting that my character's life is changed just by reading books. Sometimes when I read books—especially when they are really boring—I just try to look at it in a different way as my character would. If I read and I don't have anything else to do, I will try to figure out every word and really understand everything that I am reading to see if that helps change my perception.

I think that we are too much on electronic devices right now. I think that we have to read books because we discover so much about our history. Also, books make you see the world in a different way and help you completely change to way you think or escape reality for a short period. Books are like life. 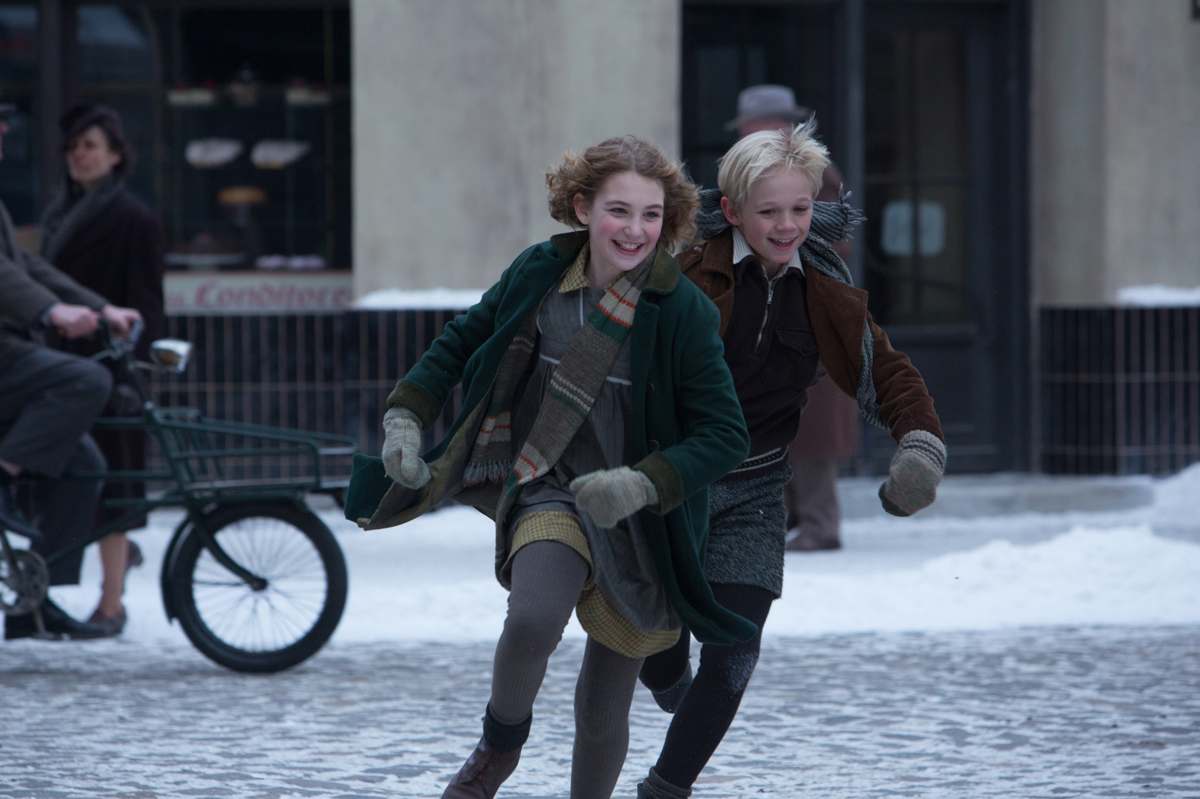 Geoffrey, over the years, you have played any number of very memorable characters—David Helfgott, Peter Sellers and the Marquis de Sade to name just a few. Here, you are playing a very simple and ordinary person in the role of Hans. Is it more of a challenge for you as an actor to play this kind of absolutely normal and unexceptional person?

Rush: That was of great appeal to me, if only because of the timing of when this screenplay came to me. For the past two or three years, I have done a lot of theater and some films—I went from "The King's Speech" to playing Lady Bracknell in "The Importance of Being Earnest" and earlier this year, I did Pseudolus the slave in "A Funny Thing Happened on the Way to the Forum," and you can't get bigger or more burlesque than that. The timing of this was really nice because I thought it would great for me to have a change of mood and play someone who was almost bland—an average guy in a small town—but with a natural intelligence. He is a working-class guy who has a love of music, but in a very amateur way. As the story goes on and becomes deeper and richer, surprises start to come out from everyone—even Rosa, who starts off as such a sourpuss but ends up almost bursting with love for this girl—and it turns out that Hans is sort of a political maverick by default because he was one of maybe 10% of the German population at the time who felt that Hitler was taking the country down the wrong path.

We tried to be very authentic and it helped by being surrounded by some extraordinary German actors from the stage and the cinema. It was invaluable to us that we were able to shoot in Berlin, even though I am sure that the producers could have said that it would be cheaper to shoot in Romania or Budapest.

Percival: Shooting there gave us the authenticity that we wouldn't have had if we went to Hungary. We probably could have done it cheaper but when you are constantly reminded of that history because it is all around you. I remember when we were doing the book burning scene, we had to get about 450 actors and we had to teach them the words to the song that they would have to sing because they had never sung them before. They knew the tune because it is still used as their national anthem but not the verse, which provide quite a sting in the translation. I looked around at one point and a number of crew members had tears running down their cheeks because of the shame of what that country must have been like at that time and what they had been paying for since they were born. A 20 or 25-year-old from Berlin is not really responsible for what happened before but they still feel the shame over what their forefathers supported. At times, it was an incredibly emotional experience and it helped me as a director to have something like that to influence the crew and the cast because it gave me a meter as to how I was doing and whether it was being taken seriously.

When you are performing in a sequence like the one involving the book burning that deal with very loaded imagery that still resonates powerfully with people today, do you approach it in a different way or is it just another day on the set?

Rush: You mentally have to take a serious step back when you are with fellow Germans of all generations, from the young to the elderly, and you see the swastika and the pile of books. It goes above and beyond work. From my experience, it reminded me of when I was a teenager and people started burning Beatles stuff after John Lennon made his misinterpreted quote about the group being bigger than Jesus—it was actual a pro-religion statement but the reaction was "We're gonna burn all your stuff because we need to wipe out that thought." It is a destructive part of the human psyche that is quite frightening.

Nélisse: It is special because most actors, I think, feel the emotions when they are acting but I don't. I don't really have those feelings. When I have to cry, I think of something sad but when I am actually doing the scenes, I can be thinking of the most ridiculous things, like what I ate yesterday or what I have to do tonight for school.