How to Disappear Completely: Sarah Silverman on "I Smile Back"

Based on the book by Amy Koppleman, Adam Salky's "I Smile Back" is a modern character study on a housewife under the influence in anonymous suburbia. Sarah Silverman plays Laney, a destructive person who is not addicted to the vices she sneaks in between feeling the love from her family, but the very impulse of destruction itself, as wired to a burrowed depression. Though Silverman was gripping in an unexpected supporting role in Sarah Polley's 2011 film "Take This Waltz" as a woman struggling to recover from alcoholism, the actress/comedienne is a full-force breakout with this role, taking the audience deeper into personal darkness through a consistently genuine grasp of character. Her previous ability to create madness in stand-up and "The Sarah Silverman Program" aptly orchestrates an endearing, horrifying emptiness out of a person who has most of all become dangerous to herself.

When appearing in the Windy City to promote the film at the Chicago International Film Festival, Silverman spoke with RogerEbert.com about how a "Howard Stern" appearance got her the role, how stand-up is like acting, the double-edged sword of her open comedic persona, and more.

Did you seek out this role, or did it find you?

It found me. I don’t have the ambition to seek out, I never think about what’s coming next unless I come up with an idea and I want to do it, or some silly thing. Both times I did dramas—I did the Sarah Polley movie “Take This Waltz” which was not as intense as this—it was from women … it’s odd that its rare, but it’s really rare when in this creative field somebody can imagine you as something they haven’t already seen you do. And Sarah did. She saw me on the “Sarah Silverman Program” where I basically play Bugs Bunny, and saw me as a receiving drug and alcoholic, and then ["I Smile Back" novelist] Amy Koppelman heard me on "Howard Stern," and said “That’s Laney.” So I got really lucky. They were just opportunities that came my way after two opportunities.

Were there any additions you brought to the character, or was it all there?

It was all there. The only things I brought from my own life were my own elements of my own relationship with depression, which happily is a little healthier than Laney’s. I probably still self-medicate to a degree as well, but just with pot.

Were you thinking much of your “Take This Waltz” character Geraldine when you were building Laney?

No, it’s interesting that they are both struggling addicts, but they are quite different. I more used other friends that are addicts as resources, who were very open and willing to tell me a lot of the ugly truths of it. And the script, in which everything was there. And I just did a lot of thinking and research and then I just pretended, and it was real.

In the same way, do you think you could have had the same confidence to take this entire role, without a rigorous lead project like “The Sarah Silverman Program”?

I think only in that I’m the product of my past and life experience. There are a lot more layers to this. And I’ll say that one’s easier than the other, though I will say that for me, comedy is easier because I’ve got my 10,000 hours, to be Malcolm Gladwell about it. But this was a little more difficult in that I don’t have easy access to my emotions, they’re very tightly compartmentalized, so getting them to the surface and then covering them as Laney does expertly, was more like a ... I thought I could joke around between scenes, but I had this lap full of emotions I just didn’t know what to do with.

Was there a difference in how you felt about Laney from how you started with her, and how you left her? A difference in state of mind?

Yeah, I think my state of mind. All these tropes of actors saying, “It really stayed with me when I was in that place for a long time,” are true for me, and have become a reality where I’m everything I used to roll my eyes at, and I used to roll my eyes at it because I didn’t understand. Now I do. It stuck with me for a few weeks, like a lingering flu.

How do you flush that away?

Just time, and getting back into a routine of regular human life. And I even found myself saying things like, “Working with Josh Charles and Thomas Sadoski,”—I can’t believe I’m saying this!—"such generous actors.” But now I understand what that means because they are dramatic actors, and they wanted me to feel safe and in a good environment, and they completely were not only thinking of themselves. You know, I’m from a stand-up comedy background, where everyone is kind of responsible for their own thing, it’s not a team sport like acting. And it is acting, stand-up. I defend that. My heart gets broken when I think about that Joan Rivers’ greatest sadness was that she wasn’t seen as an actress, because it is acting, you’re honing this act that you’re doing for a year, two years, and making it seem like you’re saying it in the moment. That’s acting. It’s very varied, obviously. 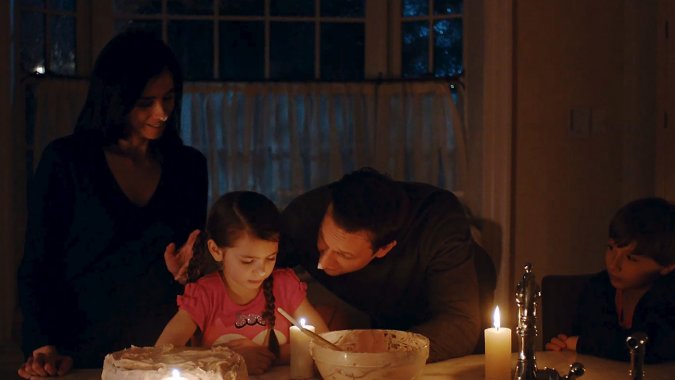 Which actors do you particularly admire?

I get excited watching, and I mean he’s passed away now, but I love watching Philip Seymour Hoffman. Him in “The Talented Mr. Ripley” was like the greatest thing. I love anything Frances McDormand does, I like the choices that Maggie Gyllenhaal makes, I love Kristen Wiig. I think she’s a beautiful actress. You can see in her comedic acting that she’s a dramatic actor. It’s funny that people don’t see that. When I was like, “I could do dramatic acting,” my agents would say, “Well, we don’t have any tape on you doing that.” And I said, “Why don’t you just use me in ‘The Aristocrats’?” And they just scoffed at me, but to me that’s a dramatic scene, like what’s the difference? You may laugh watching it, but she doesn’t know that she’s in a comedy. To me, I think that’s a great example of what I can do in drama, but I couldn’t convince my own agents to see it that way.

Do you think people get too hung up on the differences between comedians and dramatic actors?

It is bizarre how uncreative this creative world can be, in terms of what people can do. Every once and a while there’s a director who can see people in new ways, I mean Quentin Tarantino gives people whole new careers by having a vision that people don’t have; just for someone to be creative enough to imagine someone in a way that they haven’t already been imagined is odd that it’s so rare. But not to be "poor me," I’ve done everything I could ever want to do, I like what I do. But I know that I got lucky with this opportunity. When they asked me to commit to it, I was like “Sure,” but it didn’t occur to me that it would get made. Most movies don’t get made. And I figured if it was real they’d have some movie star attached to it, so I got lucky that it was real, and they still wanted me, and I got a chance to do something.

And here we are, now, with your face on the poster.

Here we are. And the poster, not at all airbrushed. Good lord, you can barely see my face on that face!

Compared to a lot of other actors, you have a refreshing openness—I’m thinking, for example, about your book “Bedwetter,” along with your comedy in general. How do you want to use it to your advantage as you pursue bigger roles seen by wider audiences?

Well, it’s a blessing and a curse. The curse part is—and I understand it—I’ve had directors tell me, “well, I would cast you as this, but you’re a personality, and people feel like they know you. And I need someone where the audience can get lost in a character, and not just felt that’s Sarah Silverman the comedian.” And I totally get that as a lover of movies and TV, that when I’ve seen someone too much in US Weekly and you know who they’re fucking and you know blah-blah-blah, you don’t get lost in it. And I think that’s why when you see someone’s first movie, they’re lauded because they haven’t been tainted by their actual personality of who they are and who they’re fucking, because nobody has heard of them yet. So people go, “Oh my god, this breakout performance!” And because I’m a comedian that’s just me, I’m the kind of famous ... it’s not like someone goes [whispers] “Oh my god, that’s Nicole Kidman,” they go, like, “SARAH!” They feel like they went to camp with me, like people feel like they know me. And I love that in so many ways, I do. But I understand why a director may not want to use me because they think people won’t be able to get lost in me. So, there’s that side of it. And then there’s the side that got me this opportunity, which was that I was talking, just being myself on "Howard Stern," talking about my own relationship with depression, and Amy Koppelman, the woman who wrote the novel heard it and was like, “This is Laney.” And she was so stubborn with the fact that it had to be me, lucky for me. And I got a chance to disappear into a role. She has my face, she has my nasal voice—maybe a little less nasal. But it’s a double-edged sword, but sometimes people can disappear.

Who in your mind has been able to disappear?

You know, Diana Ross had some really good acting turns after being Diana Ross, the diva, this big giant presence. And sometimes it can work, you know? I understand both sides of it, but I do think I can ... I feel pretty confident in what I can do, it’s kind of up to the audience of can they get lost in something that is me, after knowing me from “I’m Fucking Matt Damon,” or something. But you know, I will point out, that Matt Damon is also in “I’m Fucking Matt Damon”! And he is one of my all-time favorite actors. That was just a coincidence, but I think he’s mind-blowing. I love “The Talented Mr. Ripley” because that’s the second time I’ve mentioned it. Because I’ve seen it, it’s been on cable recently and I’ve suddenly watched it a million more times, and it’s so good. And even in like, “Contagion,” he’s mind-blowing. Mind-blowing, I think. And he is a personality. He had to weigh his presence with whatever people see. I mean, poor Jennifer Aniston, she’s on the cover of whatever Star Weekly all the time, but it’s not like she’s trying to, you know? I think she’s also really talented. I don’t know why I am bringing up these magazines except for that they’re my news. I do read Star and all that shit, well mostly because I’m on the planes; I don’t seek it out, but I buy all that crap and I think it’s just celebrity fan fiction. Because I’ve read stuff about myself that is 100% made up. There isn’t a single hair taken from truth, and I’ll just be like, “that’s not true, at all.” And then I’ll turn the page and be like, “Josh Brolin did what?!” I completely get sucked in. It’s fan fiction.