Rise of a Star, Death of a Soul: Damien Chazelle on “Whiplash”

Damien Chazelle is on fire. The 29-year-old writer/director is receiving some of the year’s best reviews for his second feature effort, “Whiplash,” an overwhelmingly powerful picture that defies the typical genre categorization of “drama” or “thriller.” It won both the Grand Jury Prize and the Audience Award at this year’s Sundance Film Festival, and has the potential to become a major awards contender over the next few months. Miles Teller is flat-out astonishing as Andrew, a 19-year-old drummer with dreams of achieving greatness at a prestigious conservatory while under the formidable tutelage of Mr. Fletcher (a galvanizing J.K. Simmons).

RogerEbert.com spoke with Chazelle about his own musical background, the debatable philosophies of Mr. Fletcher and whether he views the film as ultimately triumphant or tragic (caution: there are spoiler alerts aplenty).

What sort of impact did your experience drumming in a conservatory-style high school jazz orchestra have on your growth as a person and an artist?

Most of my experiences in the band were not pleasant. On the one hand, I was fraught with anxiety and pure dread every day because of it. I was so jealous of my friends, thinking, “You guys don’t know how easy your life is. You don’t have these rehearsals and this conductor who scares the s—t out of you breathing down your neck. You don’t know what a life of fear is.” I’m sure I overdramatized things in my head, but it certainly felt that way. At the same time, I wouldn’t have had it any other way. I was so motivated by that fear. Getting this guy’s approval meant more to me than anything, and also, being a part of this rarified ensemble that was very hard to get into was just such a badge of honor. I guess it’s the same thing with sports teams in some ways. If you’re on the varsity team, the responsibilities are a lot bigger and there’s more stress, but you also walk around feeling probably like you can hold your head high. I’d hold my head really low in the rehearsal room because I’d feel like a terrified child, but outside of the rehearsal room, I knew that I was one of the few who could actually survive in there. It was kind of a give and take of pride and shame. [laughs] It motivated me to be a good drummer, so it worked for me, but it also posed the question of what would happen if you were to push that kind of behavior even further. What would you do if you had a teacher who was a true objective monster, not just someone who scares you personally or is tough on you and maybe borderline cruel? At what point do the ends not justify the means? 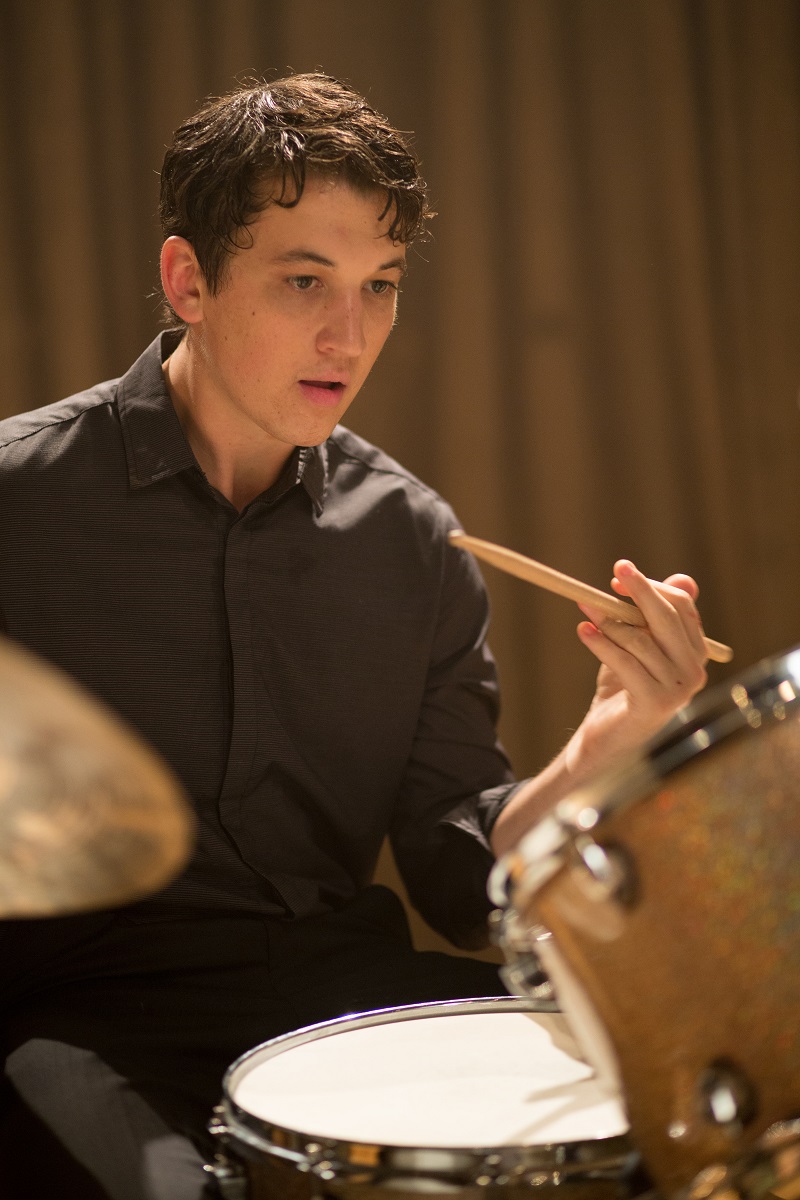 You ultimately leave it up to the audience to decide whether Andrew’s transformation is a triumph or a tragedy.

[Spoiler Alert] I like that you said that because that was certainly the hope. Sometimes I get worried that—no, worried is the wrong word, because if people enjoy the ending, then that’s great. But I had always thought, when writing the film, that the ending had always veered a little more on tragic than triumphant. In terms of a lot of responses to the movie, at least from what I’ve seen, the ending seems to be interpreted as a little more triumphant than tragic. Again, that’s not something that I’m upset about. If anything, it makes the movie more enjoyable for people, but it has been a really interesting thing to observe. I had always intended it to be a pretty dark ending.

It reminded me of “The Wrestler,” in that the final cut to black suggests that [someone] has died.

[Spoiler Alert] I love the ending of “The Wrestler.” [Mickey Rourke] steps out with “Sweet Child of Mine” blasting, and you get this triumphant feeling, but as in “Black Swan,” you know that he’s basically killing himself. In “The Wrestler,” you get the sense that he’s literally killing himself at that moment, at least that’s how I interpreted it—he has his heart attack and the cut to black is him dying, and “Black Swan” is similar too, where it ends with the death of the main character. It’s that “Red Shoes” idea of dancing until you die, playing drums until you die and literally giving your entire life to your art, resulting in your death. In this case, I don’t think Andrew physically dies, but I think a big part of his soul has definitely died.

To me, “Whiplash” is the “Raging Bull” of music films in its bruising, foul-mouthed, blood-spattered and extraordinarily visceral rehearsal sequences.

“Raging Bull” served as a big model for many reasons. When it comes down to subject matter, it’s actually, to my mind, only one step away from [my film]. “Raging Bull” is about a guy who hits people for a living, this is a movie about a guy who hits things for a living. Andrew’s not actually whacking people with the stick, but it’s still the same violent act. You’re still f—king whacking stuff, and there’s still something about drumming that I find fundamentally violent. 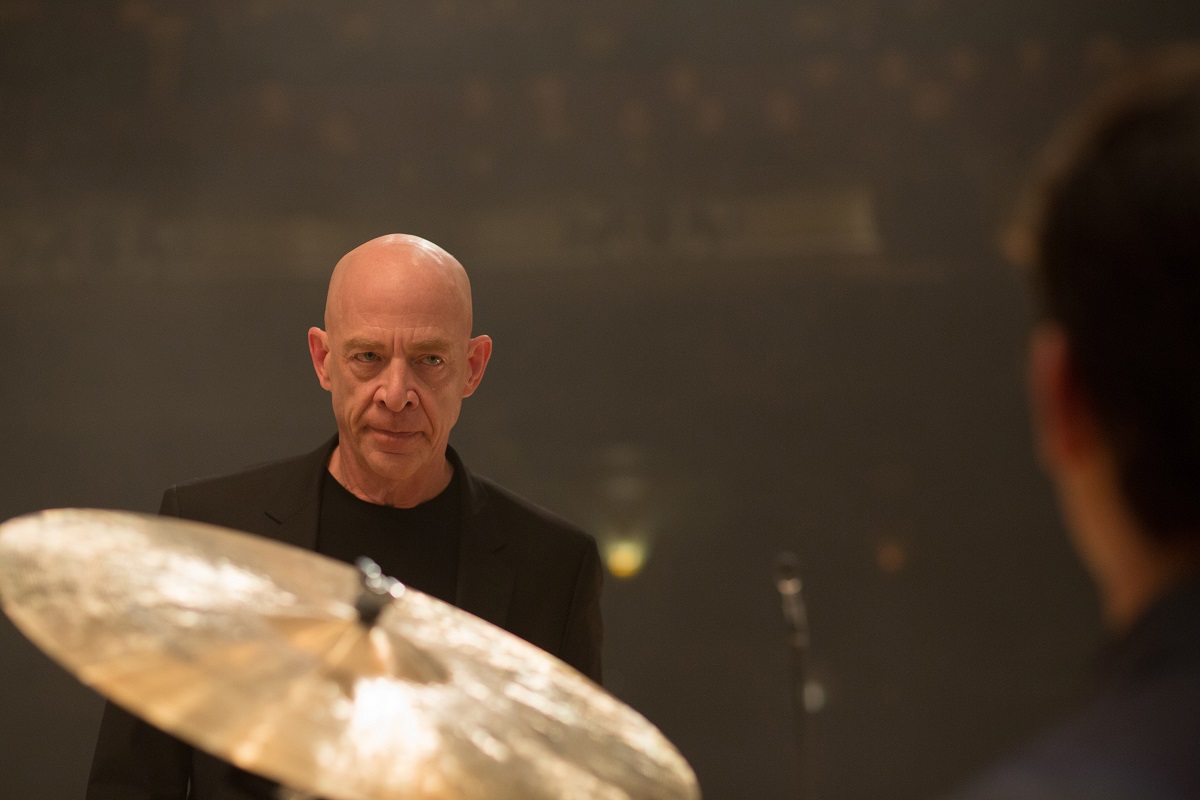 There’s even a scene where Andrew punches a hole through a drum.

I did that a few times. Never before have I been more enraged. I know a lot of musicians will be able to relate to this. There’s something very particular about the kind of rage you feel when you’re alone in a practice room by yourself, unable to master a simple thing like a rudiment. You keep trying to master this very basic thing and when you don’t get it, you just scream. I broke a lot of drum heads and I broke a lot of sticks. I even whacked the cymbals. This is something that we didn’t put in the movie and if we did, I bet people would think it was unrealistic. I would break a lot of cymbals. You whack the cymbals hard enough and they will crack in half. Drums are not actually as sturdy as they look. They’re actually somewhat fragile instruments.

How did Miles prepare for the film’s taxing performances?

We didn’t have a lot of time. We had three weeks for him to do a crash course in jazz drumming. I helped him out and Nate Lang, who plays the drummer Carl, became Miles’s coach and teacher onset. Miles had played drums since he was 15, so he knew his way around a kit a little bit. He still had to learn jazz and proper technique. One thing I like about him a lot is that there’s just something very physical about him. He’s playing a boxer next, which makes total sense to me. He’s doing my next movie after that, which will be a Gene Kelly-style musical where he’ll be dancing. The initial thing that drew me to him is his face and his eyes, which are so expressive, but his whole body—he’s got this physicality to him that a lot of young actors today don’t have. It’s not that he’s manly in the clichéd sense. In this movie, there’s something almost misshapen about him that I liked. He had been buff before in “Divergent,” and then he had to lose some of that muscle for this, but also, not gain too much weight. He had to get strong in his arms for the drumming and he couldn’t go outside and get sun. So in this movie, he’s this weird, pasty, somewhat muscular figure. He’s not frail but he’s not unnaturally cut either. He did “Fantastic Four” after this, and I’m sure he’s unnaturally cut in that, which probably made him a lot happier. [laughs] 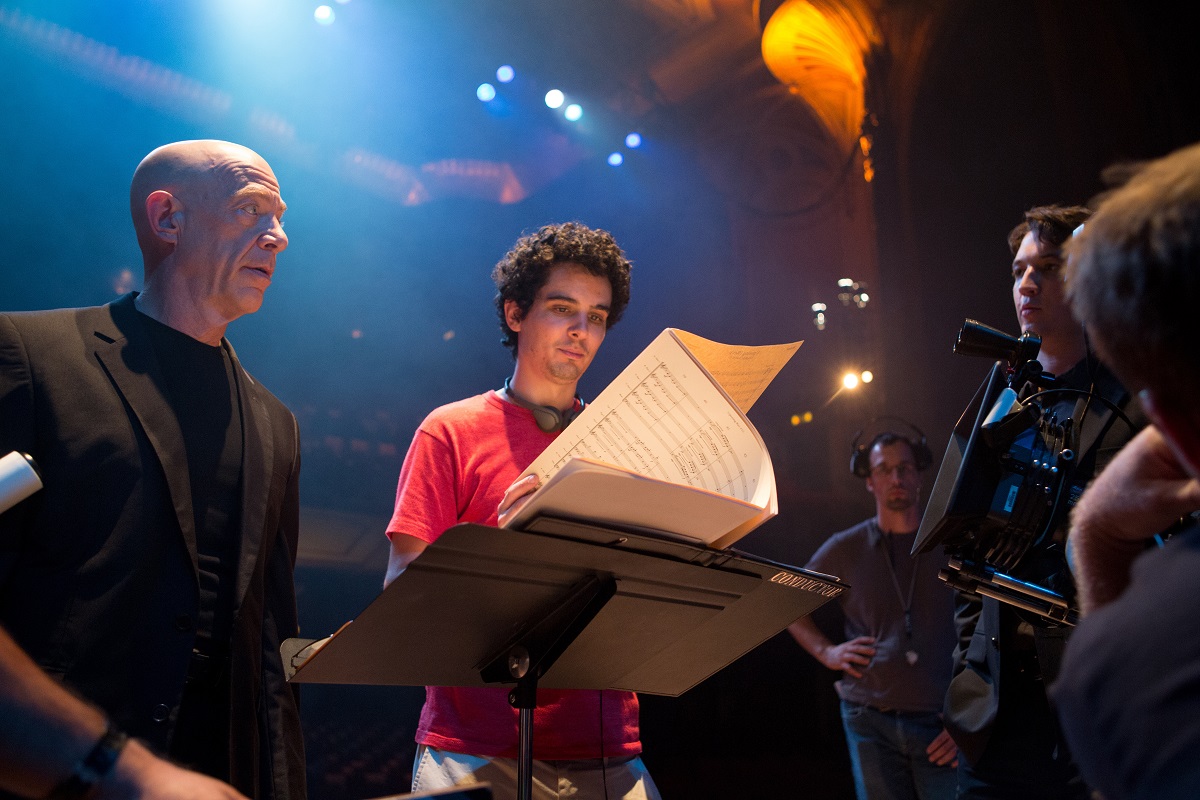 What was the process like of creating the intricately cut music sequences with editor Tom Cross?

It was very much thought-through from the get-go. Everything was storyboarded. I did Animatics for all the music sequences, so we kind of had a sense before we shot it of how it would cut and how it would play. Tom edited my short film of “Whiplash,” which I made a year before to get the interest of financiers. He’s just a genius. Other than the kind of moments of exhilaration that you get on set, sitting in the editing room with someone like him is one of the most rewarding parts of the process. We have the same taste in movies and our [method] really boiled down to putting “Raging Bull” in a loop and doing our riff on that.

Are there lessons to be learned from Mr. Fletcher?

His philosophy is compelling, such as his idea that trophies for participation are doing more harm than good. What I find noble about him is that everything he does at the end of the day comes from this deep, almost unrealistic passion for music, and it’s a kind of music that’s marginalized in today’s America. Jazz is THE American art form. But I think his love for the music is so real that it gets in the way of his love for people. To him, most people in the world just aren’t playing the music right, and he has very little patience for that. His cruelty comes from a genuine love for the music, but he’s also an utter monster. I wanted to make sure that this was a character where there were shades of gray in terms of his philosophy and in how much you might buy it, but in terms of the actual behavior he exhibits onscreen, there’s no gray zone. There’s no way you could look at how he treats some of the players and go, “Well, maybe he’s a nice guy underneath.” I wanted to make sure that this wasn’t going to be a movie about the grumpy old coach who we learn has a heart of gold. There’s no heart of gold there, but he does have a brain, and he knows how to use it.

You get a sense that he feels remorse upon learning of a former student’s death.

[Spoiler Alert] J.K. and I talked about that. We wanted to leave it ambiguous, but I think the lie Mr. Fletcher tells to his students [regarding the incident] comes less from a place of manipulation and more from the fact that he knows he’s partly responsible for it. But it’s the kind of thing that he’s eventually going to brush off. It doesn’t alter his philosophy. The guy who died was one of the few students who earned his respect and who he thought could be his Charlie Parker, but it didn’t pan out. He’s sad not just for the kid dying but for the fact that it’s one of his creations that had so much promise and burned out.

You’ve gotten me quite excited for your upcoming musical.

There are no large-scale original musicals being made right now. They’re all Broadway adaptations and jukebox musicals or catalog musicals, and they just don’t interest me as much. I like the idea of a director and composer having a relationship and bond that results in something that neither of them could’ve created on their own. That is what Jacques Demy and Michel Legrand did in the 60s. That, to me, is the biggest model. I want to do an American “Umbrellas of Cherbourg.”