While the marketing of visual home entertainment these days is hammering the streaming-video model, there’s arguably a long-tail economic model that’s keeping physical media, and in the most immediately salient example for our purposes, the Blu-ray disc, alive. Criterion keeps being Criterion, and in the mean time, the remarkably effectively curated achievements of U.K.’s Arrow Video are making U.S. inroads. Twilight Time continues to impress, as does Synapse. One label that recently caught my eye was The Film Detective, which came out of the gate offering what it called “restored” versions of classic and cult films that have fallen into the public domain—that is, titles which can be reproduced without paying licensing rights and/or residuals.

Labels trucking in such stuff are usually not to be trusted—the ability to propagate material on the cheap means that those who do it will do it on the extreme cheap, e.g., with no consideration for getting image and sound quality right. But the sales pitch offered by Film Detective on its website was appealing. I checked out a couple of its titles—John Huston’s goofy crime-film pastiche “Beat The Devil” (order here) and Roger Corman’s grisly modern-art comedy “A Bucket of Blood” (order here) and was pleasantly surprised to see them presented in versions that were better-than-serviceable, if not as pristine as the versions of films you’ll see from the aforementioned labels.

Its latest title is Corman’s notorious 1963 “The Terror”—notorious for allegedly being shot at lightning speed. This was on account of Corman discovering that he had sets from “The Raven” accessible for three days longer than the shooting of that movie took. He subsequently inveigled “Raven” lead actor Boris Karloff to stick around and shoot a Leo Gordon instant script that has young co-star Jack Nicholson falling in love with an attractive woman of mystery—the ghost of Karloff’s long-dead wife. Portions of the film were shot by Francis Ford Coppola, Monte Hellman, and Jack Hill. The Film Detective's Blu-ray has its ups and downs, picture-quality wise, but is largely better than good, with really strong colors and solid picture detail. A real pleasure to watch if you have fond memories of such cheapo-mysterioso drive-in fare. (To pre-order a copy of the Film Detective's restoration of "The Terror," click here.)

I shot a few questions to the founder of the label, Phil Hopkins, last week. He answered; the exchange follows.

Can you talk about the origins of the label? Looking at it from the outside in, I get the impression of an avid film collector who saw an opportunity to spread the love and make a business. Am I warm?

Absolutely! I have been an avid fan and film collector for over 40 years, starting with my 16mm family archive that I inherited from my great aunt and uncle. We started the Film Detective at the end of 2013 with the intention of building a classic movie distribution business around both traditional and new media opportunities. Previously, I had been working in home video and could see the transition with streaming as well as niche broadcast digital channels that were looking for content. The goal now is to launch our own streaming platform that will appeal to classic movie fans from all over the world. While not totally getting out of home video, we plan on releasing DVDs and Blu-rays throughout the year.

To what extent has the development of affordable image-repairing technology made this venture possible?

Without affordable image-repairing technology it would be very difficult to venture into continuous restoration and enhancement. Years ago, you were limited by physical film repair and based on what your source material was, sometimes you could only do so much. Today, with new software that's both robust and affordable, we've been able to improve the picture and sound quality quite a bit. 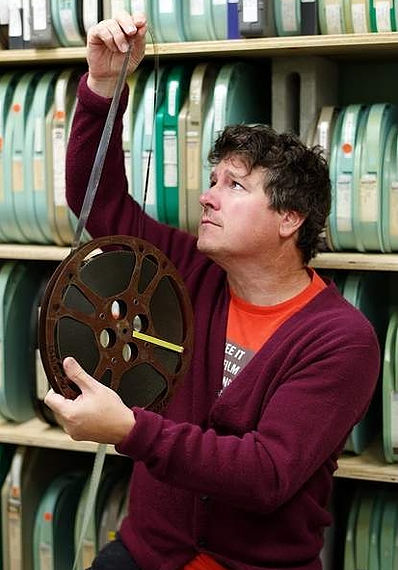 What seems a new wrinkle to me is the care being applied to titles that (correct me if I'm wrong) are in the public domain. If we had people expending this kind of care across the board, we'd have a much healthier vintage film culture. Can you expound a bit on your philosophy in this respect?

The advantage of working with films that are in the public domain is also a disadvantage. Meaning, there are multiple versions of various degrees in quality. Sometimes, the original camera negatives are not available and sometimes they are available but not readily accessible, so it's a judgment call. Also, in regards to film collectors and archives, there's a certain level of trust one has to have when loaning out prints. Our philosophy is we try to make the best presentation we can and improve the picture quality for broadcast, theatrical, home video and streaming. There are limitations and restrictions sometimes; however, there's lots of enthusiasm for new media. As long as people appreciate seeing films in a higher resolution, we'll have a healthy vintage film culture.

What are your own biggest enthusiasms in terms of film taste? Your releases suggest a big fan of horror, noir, and B pictures ... where else will the Film Detective be taking us?

We love film noir, horror and B-pictures. B-pictures tend to be underserved, as many of them are non-major studio releases. We also realize that there's a tremendous amount of foreign films, so we hope to branch out into other categories. We recently struck a deal with a South African film archive for "Joe Bullet," which was a blaxploitation film that was banned shortly after its release. We also licensed a lost Ed Wood TV pilot, "Final Curtain." We are excited to restore and release these titles later this year.