Not Just Black and White: Stephan James on “Race”

It was only a year ago when Ava DuVernay’s “Selma” found itself at the center of Oscar-fueled controversy. Despite receiving great acclaim, the film only garnered two nominations (for Best Picture and Best Song), raising questions about the lack of diverse artists honored by the Academy Awards. Yet when Common and John Legend took to the stage and performed their nominated tune, “Glory”—which subsequently earned a statuette—the audience gave them an emotional standing ovation. Many of the people applauding had tears streaming down their faces.

Now with the #OscarsSoWhite protests raging in light of all-white nominees in this year’s acting categories, Stephen Hopkins’s “Race” proves to be timelier than ever. Like “Selma,” it’s a criminally belated biopic of a towering black figure in American history that opts to focus on a narrow yet key portion of his life. On the heels of portraying civil rights hero John Lewis in “Selma,” Stephan James tackles the lead role of Olympic champion Jesse Owens. Though the film charts his triumphs at the 1936 Olympics in Berlin, the German efforts to shield black talent from public view will undoubtedly resonate with modern viewers.

James spoke with RogerEbert.com about working with the Owens family, the character in “Race” that he believes deserves her own film, and why the need for diversity stretches far beyond the issue of color.

You shared some powerful scenes with David Oyelowo in “Selma.” What inspired you about his approach to playing an equally iconic historical figure?

Everything. [laughs] I can’t tell you how incredible it has been for me to go right from “Selma” and working with David Oyelowo to making “Race.” David played Dr. King fabulously. To be so close to him on a day-to-day basis and to see the level of determination and dedication that he brought to the character every single day was invaluable for me. I was able to see it firsthand before bringing it into my own film.

What was it like grappling with Jesse’s moral quandary regarding whether he should win medals for a country that doesn’t offer him equality?

You definitely think about those questions when you are walking in Jesse’s shoes every day. If I had to make the choice myself, I definitely would’ve went to the Olympics. If he hadn’t gone, I don’t think we’d be here talking right now, we wouldn’t have made this film, and we wouldn’t have known the great Jesse Owens in the way we know him now. He made that decision based on his love of the sport. He also didn’t have many things. He didn’t have a lot of money, and he really just had his love for running, as well as a family that he needed to support. There’s no telling how that story would’ve turned out had he not gone.

He was making a statement not just to Germany, but to the entire world.

It was moving to watch the film at an advance screening in Chicago while surrounded by members of Jesse’s family. Did they play a crucial role in the film’s development?

Yes, his daughters were particularly instrumental pretty much from the beginning stages of this film, long before I was involved. They would examine certain points of the story and help us maintain accuracy. They’d say things like, “Daddy wouldn’t say that,” or, “That didn’t happen.” Who better to have than Jesse’s own daughters to tell us these things? We used all of their feedback, and it was great to have them involved. It was especially great for me to use them as a researching tool, and find out things about their father as a person. There is so much information that I could find about him as an athlete, but very little about the person he was, so to have his daughters there to fill in the gaps for me was very important.

You also had a real-life Olympian, Hank Palmer, in the cast, playing the role of Jesse’s brother.

He was another person that I could lean on. He gave me a lot of running tips and told me about his own experience at the Olympics. He had been to Beijing in ’08. I grew up playing basketball, football and volleyball, but never track. Hank was close to my age and he was able to put so much in perspective for me. Obviously I had coaches as well, but Hank had actually done it all himself. It was very cool to be able to look to him for any information on a daily basis. 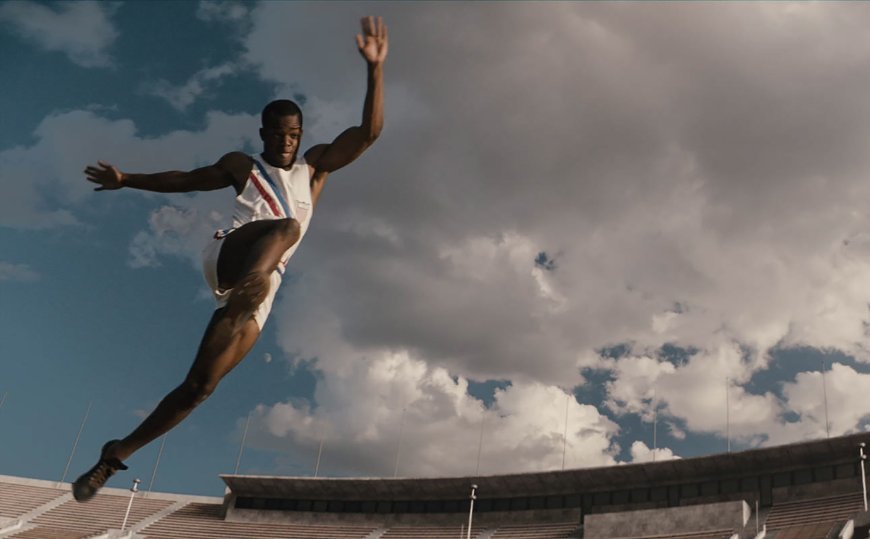 How did you and Stephen Hopkins go about staging that incredible extended take of Jesse entering the stadium as the camera circles around him?

It was very careful, specific work between myself, the cameraman and the director. It’s a scene that we spoke about months in advance because we understood how important it would be to put the audience in that moment with Jesse. I feel like that’s probably the moment in time when the audience feels closest to him. But when we filmed it, I was walking into an empty field. [laughs] I didn’t have 150,000 extras doing the Nazi salute in the stadium and I didn’t have a blimp flying over my head. These were all things that I had to imagine, while allowing the audience to feel Jesse’s emotions during each moment. It was all done in one take, and it’s almost like a dance. The cameraman’s working around me, I’m working around him, it’s all timed and all figured out. It amounts to about five or six minutes of choreography that you just have to learn. Obviously we went through it a few times. [laughs]

One of my favorite German actors, David Kross, plays Carl ‘Luz’ Long, who is a fascinating character in his own right.

David Kross is an incredibly talented person. I couldn’t have been happier to share those moments with him. I’ve been enthralled with the story of Luz and Jesse’s friendship all in itself. They’re two guys from different walks of life, they look nothing alike and have very different backstories. Yet they were able to find something that brought them together. They were living in a time and place where there were so many things that could’ve separated them. To have them form the bond that they did in Germany that lasted throughout the rest of their lives was amazing. I really couldn’t have had a better scene partner than David.

Do you feel the current #OscarsSoWhite controversy could lead to tangible change in the industry?

Oh of course, this dialogue is so important and it’s so key. We’d be crazy to just act like issues with diversity don’t exist, not only in film and in television, but in our academies as well. It would be crazy for us to ignore that. The problem is very, very clear and you can’t hide it. I love that the dialogue is happening. I think the root of the issue is so much bigger than any one person’s opinion. It’s more of a collective thing. We certainly all have to look within ourselves and find the root of the issue, as well as find the things that bring us together rather than separate us. It’s really not just a black and white issue. The diversity issue is so much bigger than that. There are females that are struggling for roles and there are issues with ageism too.

Speaking of women in the industry, Leni Riefenstahl emerges as quite a hero in this film, considering how she champions Jesse in her documentary, much to the chagrin of Joseph Goebbels.

She really was infatuated with Jesse. Her film, “Olympia,” was very important to me in my research. There are so many full circle moments where you go, “Wow, her story could’ve been made into a film itself.” That could be a whole other movie, “The Leni Riefenstahl Story,” where you go more in-depth about the struggles that she was having internally to make the film that she wanted to make. She sensed that he was a very, very special sort of athlete, and wanted to document every single moment of his time in the Olympic games. She wanted to preserve that footage so that it would live for generations, and 80 years later, we got to make a film about it. The title “Race” has a lot of different meanings. It’s not just running and it’s not just black and white. You also have to look at the human race, and the struggles faced by anyone [who is oppressed].

The scene where Jesse is forced to take a storage elevator in order to attend his own banquet says so much in a small amount of screen time. Was that scene always in the script prior to filming?

Yeah, as far as I know. It really gives you something to think about. You see him go to Germany, win four gold medals and become so famous. Then he comes back to face the reality of his own country, which is far from perfect. But we see a glimmer of hope when he’s approached by that little kid. When he looks at Jesse, he doesn’t see black or white, he just sees the fastest man on the planet, and is totally blown away. That moment is so, so telling, and can perhaps be read as a hopeful sign for what’s to come, foreshadowing how people will eventually see Jesse for who he is as an individual rather than anything else.

What has it been like bringing the vital stories in “Selma” and “Race” to the big screen, at long last?

It wasn’t something that I planned out for myself to do. It’s cool to tell stories that are so important not only in the fabric of black history but American history and world history. I look at “Selma” and “Race” as so much more than black stories. I may want to lay off the biopics for a little bit. [laughs] But I’m having fun. I can’t complain that the stories landed in my lap decades after they happened because now I get to be the vessel to teach other people about them. At screenings, I’ve seen kids perched on the edge of their seats, cheering in the middle of the film when Jesse is winning races. It’s incredible to see the way that they’ve reacted and become as inspired and excited by Jesse as I was. That has been the goal from day one.