Nature is Monumentally Indifferent: Werner Herzog and Clive Oppenheimer on “Into the Inferno”

There is no question that Roger Ebert adored Werner Herzog. A brief sampling of the critic’s oeuvre provides ample evidence that he was profoundly moved by the German filmmaker’s unflinching exploration of mankind’s frailties, compulsions and invigorating delusions. Herzog’s latest documentary, “Into the Inferno,” is a towering achievement in every sense, as it surveys various active volcanoes throughout the world, as well as the nearby communities that have been defined by them. When volcanologist Clive Oppenheimer, Herzog’s close collaborator on this project, entered the room for our interview, the director gave him context on the man whose work serves as the crucial foundation of RogerEbert.com.

“Roger Ebert was the last mammoth alive who was holding the flag for real movies and moviemakers,” explained Herzog. “He was a very valiant soldier of cinema who passed away, and we miss him. It’s over with serious discourse about cinema in the print media and on television. It has been replaced by celebrity news. So we are speaking in his spirit always.”

With Roger’s spirit vividly etched in our minds, Herzog and Oppenheimer spoke with me about fossils, drones, obsessions and yes, spirituality.

There’s a scene in “Grizzly Man” where Timothy Treadwell is filming a bee that he believes has died. He considers this a tragedy, since the insect was only collecting nectar from a flower, but then suddenly, the bee moves. To me, this scene encapsulates one of the essential themes of your work, which is our need to define a world that defies our understanding.

Werner Herzog (WH): That’s a very good and unexpected example you have brought up. It has always been my aim to find that sort of passion and figure out how to transform it into cinema. Treadwell’s footage was almost like a diary, and he had always dreamt of becoming the movie star in his own gigantic production. He rightfully did that because he was, in a way, a star and somebody who brought us footage that nobody else has ever captured and never will again. That spirit of immersion and curiosity and awe and participation is something which Treadwell and I have in common, Clive and I have in common, and Roger Ebert had in common with us as well.

Another recurring theme in your work is the idea of having an obsession that threatens to consume you, and volcanos are a great metaphor for that.

Clive Oppenheimer (CO): That’s true. Being in the scientific world, it’s a challenge to understand something like a volcano because most of what is going on is deep beneath our feet and we don’t have direct access to it. We are trying to imagine what is going on and find the evidence for it. I’m always struck and somewhat humbled when I look at the scientific literature from 100 years ago. The pioneers of modern volcanology had access to size monitors and spectrometers and were starting to make close-range observations. They were asking the exact same questions we are still asking, and we haven’t understood everything yet. We are continuously trying to transcend that gap in understanding and evidence and knowledge in order to figure out how volcanos work, why they erupt in a particular way, and so on. 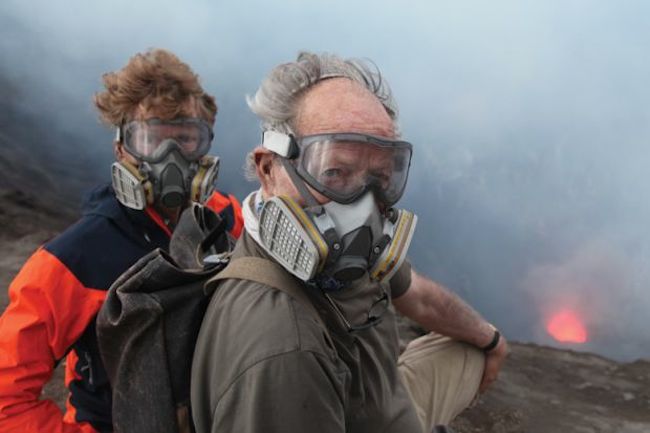 You and Clive first met while making 2007’s “Encounters at the End of the World.”

WH: Yes, you see our first encounter in the film. The wonderful thing is that Clive insisted on training his camera—his private camera—on me at one point. We were discussing things such as how to avoid certain dangers, while reflecting on a volcano that had threatened to explode 40 years ago. The volcano itself wasn’t that interesting, but the man who refused to be evacuated—the only one of 75,000 people—was what set the tone for the film that we made together ten years later.

CO: We had a very easy partnership. Before our first shoot, I wasn’t sure how it would pan out. I knew the locations that we wanted to go to and the themes we wanted to explore, but I was unsure of exactly how we were going to work together. Quite early on, in North Korea, he told me, “You are the red thread that runs through the film.” We had a lot of laughs and we weren’t working all day long. We would have a lot of good times over dinner talking about many other things, so it was a very easy process. I didn’t know what would come out of the editing. I had imagined that the questions I asked during my interviews wouldn’t have appeared, and I was surprised when they were included. That, for me, is a big part of the magic of the film. The art and poetry of the film is what comes out of the narration and the editing. Forty hours of footage goes in one end and a wonderful work of art comes out the other.

WH: I always felt completely confident—it’s like in a feature film, knowing your principle character is extremely well-cast. I had that same confidence in Clive.

Another marvelous character in the film is paleoanthropologist Tim White, who you filmed making historic discoveries in the East African Rift of Ethiopia.

WH: We were very, very lucky. In 100 years, only three skeletal remains [of early man] were ever found at this site. This was the third one, and we were right there when it happened. In fact, when I first heard they had found something, I said, “Please stop it! Don’t do anything right now. Let’s do it tomorrow until we have unpacked our cameras and assembled our stuff. Let’s do it tomorrow morning instead of this evening.”

CO: There was a real serendipity to it, since going to Ethiopia was our plan B after we couldn’t get filming permits to go into Eritrea.

CO: I was initially disappointed because I had worked in Eritrea, and I knew what its possibilities were. I didn’t know Tim White, but I knew of his work. I e-mailed him and said, “I’m involved in making a film. We’re in Ethiopia during this period if you happen to be digging at that time. Could we parachute in?” I had an answer five minutes later saying, “You’re in luck.” And it was huge luck that so much exciting stuff was going on in the camp when we got there.

WH: What’s also, in a way, funny, is how Tim speaks about the digging as if “we are in Las Vegas, and we are rolling the dice.” And man were we winners. You would’ve loved Tim. He’s such an incredible character in how he comes across on the screen. You just pee your pants when you watch him, and yet, the very high-caliber science behind his words still shines through. This is serious business.

CO: The finds that came out of the ground are not going to be published in the Nature or Science journals tomorrow. People will be spending five, even ten years putting it all back together. I was very impressed by Tim’s approach, coming from a background in anatomy, that he was only interested in the evidence. He didn’t want to make up some story about how these hominins had grown out of the lake. He wanted to do things very scientifically and methodically, with a lot of painstaking research behind it.

WH: He always spoke about his work in terms of forensics, as if he was investigating a crime scene. While we were there, they found the fossilized excrement of a lion that had turned into stone, and we would immediately start to concoct stories. Was it a lion that killed the early human? Of course, the lion could’ve been there three weeks later, or maybe 20,000 years earlier. 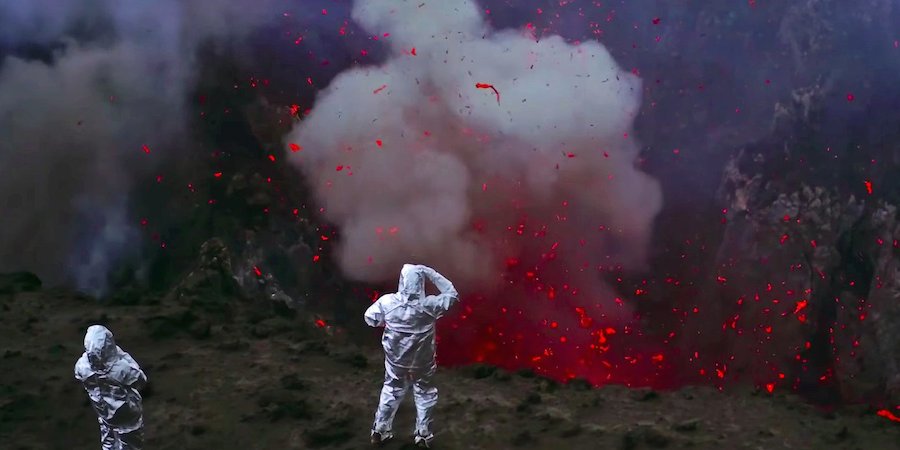 Though “Into the Inferno” illustrates the manmade nature of deities, I find your work oddly spiritual in how it invites us to meditate on the truth of our existence. Do you consider yourself in any way spiritual?

WH: Oh, I should be careful with this question. Let’s only touch it with a pair of pliers. [laughs] I do have a clear vision, and I do see things that are existing in my quote-unquote spirit, but that doesn’t necessary make me a very spiritual person. I’m reminded of an interview Larry King had on his talk show with one of Michael Jackson’s sisters. He’s talking about how many millions she made on her latest record, and all of a sudden, she looks at him tearfully and says, “Larry, you know, I’m not interested in money or sales or songs. I’m a spiritual person.” And I thought, “Oh my god…”

CO: Whereas Madonna lives in the material world.

WH: Yes! And I prefer the material woman.

CO: But I agree that your work does evoke the spiritual. When you think of the long shots of the clouds rising over the cliffs, and your choice of music, it’s easy to see how it evokes a spirituality.

WH: But it only provokes me into looking again at that Larry King interview. I probably shouldn’t do that.

How did you go about choosing the music for this film?

WH: It’s a difficult question, since you never know exactly what will be coming at you. I always had a feeling, for example, that there should be something from Verdi’s “Requiem” in the film. You hear it when you see the lava flow in Iceland. That turned out to be a very easy choice.

Though “Into the Inferno” will be seen primarily on Netflix, audiences should seek out the film during its limited theatrical run, since it is an awesome big screen experience. Audiences at TIFF audibly gasped during the film’s opening shot.

WH: That shot somehow popped up while my editor and I were viewing the footage. I immediately said, “That looks like the opening shot because the camera approaches the action very slowly and we have enough time to insert some of the main credits into it.” So it was a practical choice. At the same time, you see these tiny figures standing at the rim of something, and all of a sudden, the camera rises further and you find yourself looking straight down into an inferno. It was one single take, achieved without a cut, and it was done by a drone. You can’t have a helicopter fly over boiling lava. It would’ve exploded from the heat, and is just way too dangerous. The pilot of a helicopter would’ve flatly refused anyway. You have to be very prudent with what you are doing and what sort of tools you are utilizing. Drones have become a wonderful new tool in filmmaking.

After seeing Fisher Stevens’ global warming documentary, “Before the Flood,” one gets the sense that nature is angry at our species for how we have destroyed the environment. There is a cautionary feel to your film as well, though in a much different sense.

WH: Nature is monumentally indifferent. The universe couldn’t care less about us. I say this very clearly in the film: our planet is “indifferent to scurrying roaches, retarded reptiles and vapid humans alike.”

CO: From a geological perspective, you see that homosapiens have been around for over 2,000 years in four and a half billion years of Earth history. So when you look at it long term—

WH: We are just a blip. I found it very interesting when Clive interviewed the Ethiopian scientists and asked them, “Do we have another 100,000 years?” In their calculation, mankind will be entering a very critical phrase a thousand years from now. It’s not because nature is angry, it’s rather that we are stupid. We’re not doing the right thing with our planet. As for the “anger” of the volcano, we leave it up to the local populations who create their demons, their gods and their divine punishment.