From its premiere at the Berlin Film Festival to our naming it one of the best films of 2015 to this week’s theatrical release, Andrew Haigh’s “45 Years” has been one of the most-discussed and appreciated films of the last 11 months. Way back at the Toronto International Film Festival, where the work was widely considered one of the best of TIFF, I had a chance to speak to the 42-year-old writer/director and one of his timeless stars, Tom Courtenay.

In the film, Courtenay plays Geoff, a man planning his 45th wedding anniversary party when he receives a letter informing him that the body of a woman who was once his fiancée has been found. The discovery sends Geoff into melancholy reflection, but it does something even more devastating to his wife Kate (Charlotte Rampling, giving what I consider the best performance of the year in any category).

Haigh, Courtenay and I met in a crowded restaurant near the end of TIFF to discuss back story, internal monologue, Rod Steiger, David Lean and Nuri Bilge Ceylan. It was one of my favorite interviews of the year, for one of its best films.

The first thing I’m curious about is chemistry and history, and how you create that when you’ve got such a limited amount of time to make a film. How do you as an actor create believable history with your partner? And how do you, as a director, support that?

ANDREW HAIGH: It’s a strange thing. Obviously, it’s the most important thing. If people don’t believe they’re a couple, it’s not going to work. I think it goes to the very beginning. You have to cast the right people. You have to feel they make sense together as a couple. And then kind of outside of that, it’s little decisions you make in the script—that you feel that kind of chemistry is embedded into the script. There are routines of long relationships in the script—who takes the dog for a walk, who picks up the post, who drinks out of a certain cup. It’s all these little things that speak to the truth of a relationship. And then you just start hoping for the best a bit. [Laughs] We didn’t rehearse. We didn’t do any rehearsals. None at all.

Did you know Charlotte?

TOM COURTENAY: I met her briefly once. We had one day. We read our scenes with Andrew there. I went off. And that was it. And then we met up. Obviously, we were both of us, thinking, we’ve got it.

AH: And I met up with Tom and Charlotte beforehand and we talked about the characters. Who that person was. The back story. And all that kind of thing.

How much history and detail do you two create for the back story? How much do you know about the last 45 years?

TC: You just respond to the words that they give you. That’s always what I do. I found the words very informative. And the words I wanted to speak. It was easy. I couldn’t wait to learn. I love that. I find by learning the words so they’re in you, it’s most of the work. What you say; what he doesn’t say. The little things. Listening. Andrew shoots in this very naturalistic way. There aren’t many close-ups. Often, they’re a hindrance. If you have a two-shot and two singles, it’s not the same. You don’t have the same relationship. Rod Steiger told me a famous story. In the back of the car in “On the Waterfront” with Brando—“I coulda been a contender.” They did the two-shot. Then they did the single with Brando. Then he went home. I said, quite honestly, “Rod, I think you were better off without him.” [Laughs] Close-ups can be artificial.

Andrew, how much back story do you develop as a writer?

AH: I think what I do is not so much back story in terms of they did this, they did that, but I always work out what music people love, what films they like, what books they read, their political views. I work on those philosophical things that define a person more. I do come up with some key events that may have happened in their relationship—how they met, what they did, key conservations. I put that away, but it’s in the back of my mind when I’m writing. It’s helpful. I know what book she’s going to read if she grabs a book. I know what Geoff will take off the shelf to re-read. It’s just helpful when writing.

But a lot of it is unspoken—you don’t say it to your actors?

AH: I think we talk a little bit about it. In the end, you’re just capturing what happens in the moment when you turn the camera on. I think sometimes analyzing the details of deep emotional things can over-do it.

TC: I just did this television series which was good stuff. And the collaborator said that his main job on the set is to forget all of his homework. Forget it.

AH: You prepare. You over-prepare. And then you forget it and just try to respond to what’s happening. 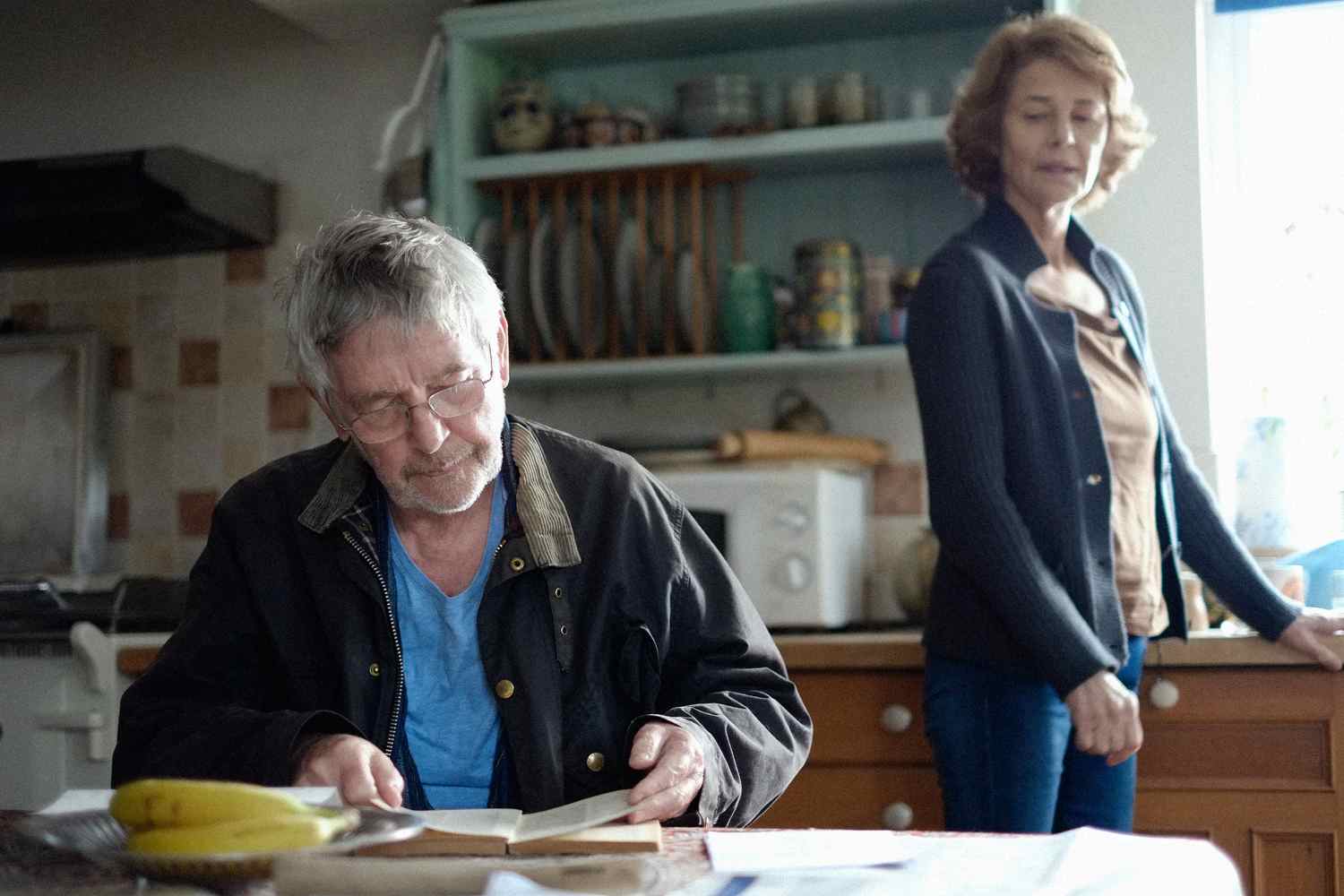 I’m sure you’ve been asked this before but it feels unavoidable. How does someone your age write this story?

AH: I’m actually 70. [Laughs] It’s so funny. People do ask it a lot. It’s interesting. When I read the short story, it really affected me. And when I started thinking about it, I didn’t think I needed to imagine what it was like to be 70. I thought, how would I feel in this situation? I’m only 43 but I still have doubts, regrets, fears, concerns. I think your body gets older and you change, but your core concerns and beliefs remain the same. This could have been two 20-year-olds or two 40-year-olds. And then when these guys read it, I double-checked to make sure it sounded right to two people that age.

TC: When I met this kid, I thought, “Wow, where did that come from?” It’s speaking for me at my age.

AH: I’ve always looked back, and I’ve always been very concerned about things I’ve done and my life choices. Even when I was five, I was such a melancholy kid. It’s always just been part of my nature to want to think about things too much.

Did you write it with either of them in mind?

AH: I don’t write with people in mind. You get fixed. There’s a likelihood they’ll say no. We finished the script, sent out drafts, and we had our lists. We went to Charlotte, and she said yes. And then finding the perfect person for Geoff, nwe sent it to Tom. I think when people started reading the script, they thought, “Oh, it’s going to be about an angry man.” And, no, there’s something much more vulnerable about this man. Something more sensitive. A lot of actors don’t have that. I do think that Tom as an actor has that. There’s a quality he has that a lot of actors don’t have. And against someone like Charlotte, who has a lot of strength and power.

It’s an interesting film in terms of interpretation and conversation. Just the other day, I argued with someone who thinks “she’s crazy.” And I said “no, no, no.” So, have you heard interpretations that surprised you?

TC: It started in Berlin. There was the lady yesterday who asked if I was crying for my lost child. That’s a new one. That’s the furthest out. There was the man who was drunk in Norridge. [They both laugh.]

AH: It’s so weird and I love it. I always knew that some people would think that Kate was crazy. For me, it makes total sense. For me, it’s not as simple as jealousy. It’s about something so much more profound and weird and internal and strange.

And impossible to verbalize.

That’s part of the key. It’s something that tears you up emotionally that you can’t explain.

She can’t be traditionally mad about it.

AH: Nope. And she knows that. She knows she can’t be cross about something that happened before they existed as a couple. And that’s the key. If you look at your life, and you’re forced to focus in, it can crumble and dissipate. And if things appear that you didn’t quite understand, and revelations. “That’s not what I thought. That’s not what I know.”

TC: There are a couple of things. First, is the timing. The timing is not good. And there’s also the intensity. It’s not the girl in the ice, it’s her effect on him that gets to her. That surely must be it. 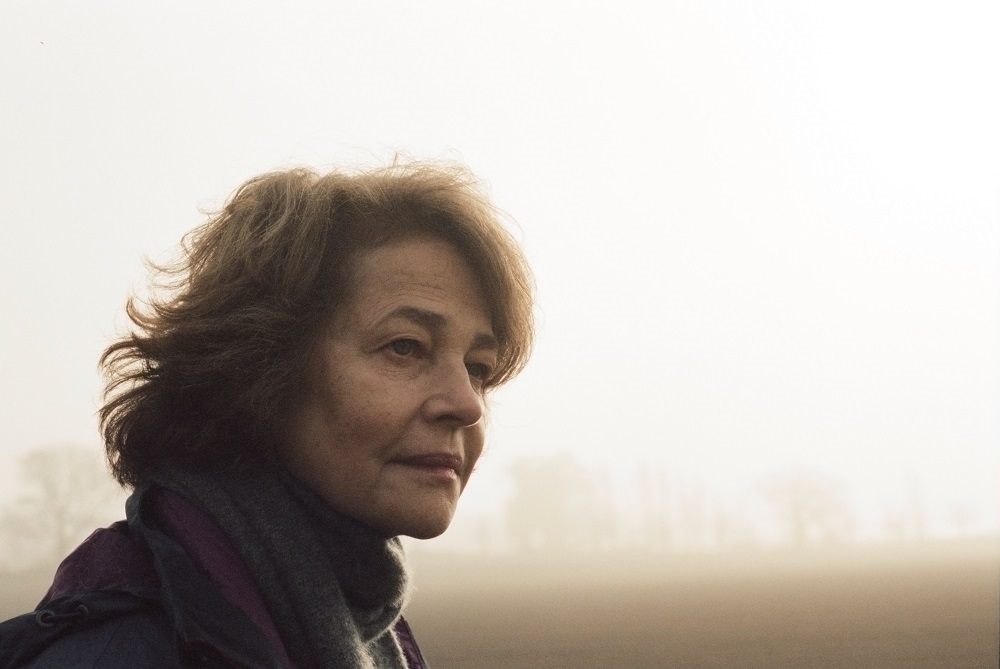 And there’s the idea that choices you thought you made as a couple, you weren’t fully informed, and that would be devastating.

AH: Exactly. It’s two key things to me. It’s that—you didn’t have all the information when you made key decisions. And then there’s the more existential question of, if that woman hadn’t died and Geoff had married her, what would Kate be doing with her life? That’s scary. For me, it’s those two key thoughts that would throw me off balance.

TC: My wife pointed out that she turns away from him. Why did she turn away? She said it’s because he’s put her through it but he can’t help it.

That’s why it’s so devastating.

AH: She can’t do anything. And the tragedy is that they do love each other. They’re a good couple. It’s the influence of the past to hurt something that’s really quite good.

What were the influences on this piece? Either in writing or cinematically while shooting?

AH: I’m always a big fan of naturalistic and realistic—film and photography. There was a Jurgen Teller book of photos in Suffolk near where we shot. Any kind of naturalistic film. There’s a filmmaker—Nuri Bilge Ceylan. “Uzak” is one of my favorite films. It’s so naturalistic, but also so drenched in melancholy, isolation. There are wind chimes in our film that I basically stole from “Uzak.”

That’s great. How important are film festivals for a movie like this?

AH: Amazingly important. Berlin, TIFF, Telluride. It makes all of the difference. It’s a small film. It’s an English film. Just to get people talking about it is amazing.

Tom, how is Andrew different from others as a director?

TC: He said in the outset that he would like long takes. And his naturalistic two-shots. Not many close-ups, something he shares with David Lean. He didn’t want what he would call talking heads. He didn’t like it. And, David Lean, like Andrew, was an editor. I remember with “Doctor Zhivago,” it came out not long after it finished shooting, which is unheard of. It’s just natural. Also, he’d written it, so we could change a word or two if we needed.

AH: The main direction that you do is in the preparation and meeting with them and then letting them do their thing. You’re employing an actor because you know they can do the job. You want them to come up with it themselves. I see some directors who are very hands-on, and that’s not the way I like to work.

TC: The way he writes is so effective. It’s so compelling. Almost nothing to it but so expressive.