Life is in the Middle: Theodore Melfi on “St. Vincent”

Theodore Melfi’s “St. Vincent” marks Bill Murray’s first starring role in a comedy since 2004’s “The Life Aquatic with Steve Zissou”—that is, if you don’t count 2006’s “Garfield: A Tale of Two Kitties,” and I suspect Murray wouldn’t either (see “Zombieland”). Murray plays Vincent, a sullen, foul-mouthed war vet who forges an unlikely bond with his 12-year-old neighbor, Oliver (Jaeden Lieberher)—becoming his guardian, mentor and friend—though saint he is assuredly not. This comes as a surprise to Oliver’s mom, Maggie (Melissa McCarthy), and Vincent’s longtime friend-with-benefits, a pregnant Russian prostitute named Daka (played by Naomi Watts in her latest in a series of truly bizarre roles).

Melfi spoke with RogerEbert.com about the surprising true-life inspirations for his characters, the joys of working with Murray, and what this film taught him about the art of comedy.

Was Bill Murray in your mind while creating the role of Vincent?

I didn’t think of him for the role because I was only thinking of my father-in-law. I was thinking of this real-life guy who was a Vietnam vet and a curmudgeon and an alcoholic. I always had him in my mind. I try not to write for actors because, A. They’re not the character, and B. It’s really depressing when you don’t get them. [laughs]

This role seems tailor-made for the Murray persona, which remains deadpan while in extreme situations. When a character exclaims, “My water broke!” Vincent replies, “Get a plumber.”

He’s the only guy on the face of the earth that can be absolutely dislikable all the time and never unlikable at the exact same moment. He’s always one step forward, one step back. We were walking down the hallway in the convalescence center where we shot the scene with Vincent’s wife, and this old guy walks by. He must’ve been 85, and had a walker. He also had a plaid shirt on. Bill goes up to him and says, “That is a great shirt,” and the old guy lights up like a Christmas tree, and goes, “Thank you.” Then Bill says, “But I wouldn’t wear it with those pants.” That’s Bill Murray—that’s his comedy.

He’s fantastic to work with. He’s a consummate professional and consummate actor. He’s there to do a great job and wants to explore and keep it fresh all the time. He pushes you to be fresh and free and spontaneous, and you have to be prepared in order to be ready for what he can do. At one point, we assigned a B camera as our “Bill camera” so that in case he did anything [unexpected], we would be able to catch it.

Was the scene that plays over the end credits “Bill camera” footage?

It’s a scripted moment, but what Bill does is not scripted. I’ve gotta say, I don’t know if the movie’s any good or not anymore because I’ve seen it 500 times, but that’s the best end credits I’ve seen in the history of end credits, as far as I’m concerned. It’s proving the point that we could watch Bill Murray read the phone book and be perfectly satisfied. The only direction Bill was given was to come out in the yard and sing “Shelter From the Storm.” We gave him a couple of props, such as a hose and some cigarettes. The only thing I did was hide the cigarettes under a dead plant. You’re waiting for something to happen [in the scene] and you’re happy that nothing does. 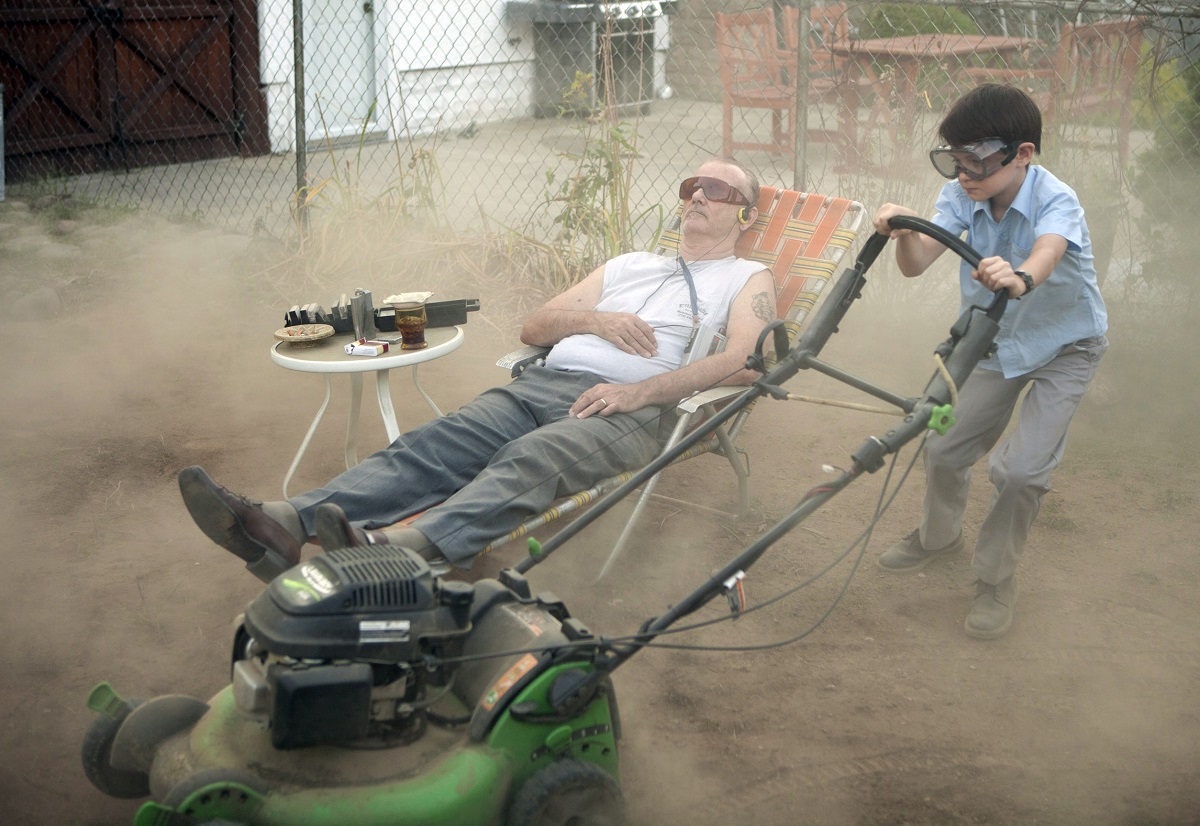 You’ve spoken about how the film was partly inspired by your own experience of adopting your 11-year-old niece, thus forming an unconventional family much like the one in the movie.

We all lived together—my wife of 18 years, my daughter, my niece, my mother—who has Alzheimer’s—and my wife’s father, who is an alcoholic. I’d look at them and go, “What is family anymore?” Family is just the people you care about. We can bond with people that we have nothing in common with, even if it’s just for a moment. The concept of “family” has changed so much. It’s not just “mom and dad” anymore. It’s “mom and mom” and “dad and dad,” and it’s kind of beautiful.

I was struck by how you don’t demonize your characters, even Maggie’s cheating ex-husband.

People live in the middle. I think everyone does. Good is on one side, bad is on the other side, and we live in the middle. What’s bad about Oliver’s father? He fell out of love with his wife and he cheated on her. Is that bad? Yeah, cheating on her is bad, but falling out of love isn’t bad. It happens. Maggie is not a good mom and not a bad mom. She’s a mom. There’s heaven and hell in everyone.

Chris O’Dowd’s Catholic school teacher is particularly refreshing in how he voices tolerance for all faiths while remaining strong in his own.

It’s what Pope Francis is saying. He’s saying that the church is a hospital for those who are sick. People of every faith can come there and find help, support, food, love. I wanted to write a character who reminded me of the Catholic teachers I had and one of the Catholic priests I knew growing up, who were just so good. They’d have a beer with you and they were there for you in your community. They weren’t pedophiles—that was .0001 of the population. They were good guys and good human beings who basically said, “I’m not going to be like everybody else. I’m going to live my life for you,” which, I think, is astounding. Can you imagine that life? I’m going to give up all chances of having financial success, I’m not going to own a house or any property, I’m not even going to own a car. I’m going to dedicate my life to others. Just think about that life—not just in Catholicism but in any religion. Think about the choice that a person makes to become that. That’s pretty profound and pretty beautiful and whether you believe in God or not is irrelevant. If someone says, I’m going to dedicate my whole life to helping others and they have no religious faith at all, there’s no difference. I wanted to have a Catholic teacher who inspires the audience to think, “It’s okay to believe in whatever I believe in.”

This year’s ever-growing slate of evangelistic films are conveying the opposite message.

We’re living in the polars right now. Jesus is on one side and atheism is on the other, but life is in the middle. Religion offers good and it offers bad. It does some good things and it’s done a lot of bad things over time. Mainstream Hollywood basically shuns religion for fear of being branded religious, and religious films can’t find the middle. This is, by no means, a religious film and I’m not a religious person at all. It’s just a story that I feel is real.

When you’re working with such skilled improvisers, was there always a temptation to go off-script?

There was, but the truth is, the movie is almost 95 percent scripted. I spent so much time on the script and everyone loved it. Melissa was pretty much on script the whole time. I told her that the only way to make Melissa McCarthy disappear is to not “do Melissa McCarthy.” Just say these lines, which belong to Maggie. We’d improvise only when we got stuck. If something fell flat, she would try something else. Bill stayed pretty tight to the script except when he got an idea that was better. He improvised my favorite line in the movie. He’s looking at his wife, who has Alzheimer’s, and he goes, “As far as I can tell, you’re still beautiful.” 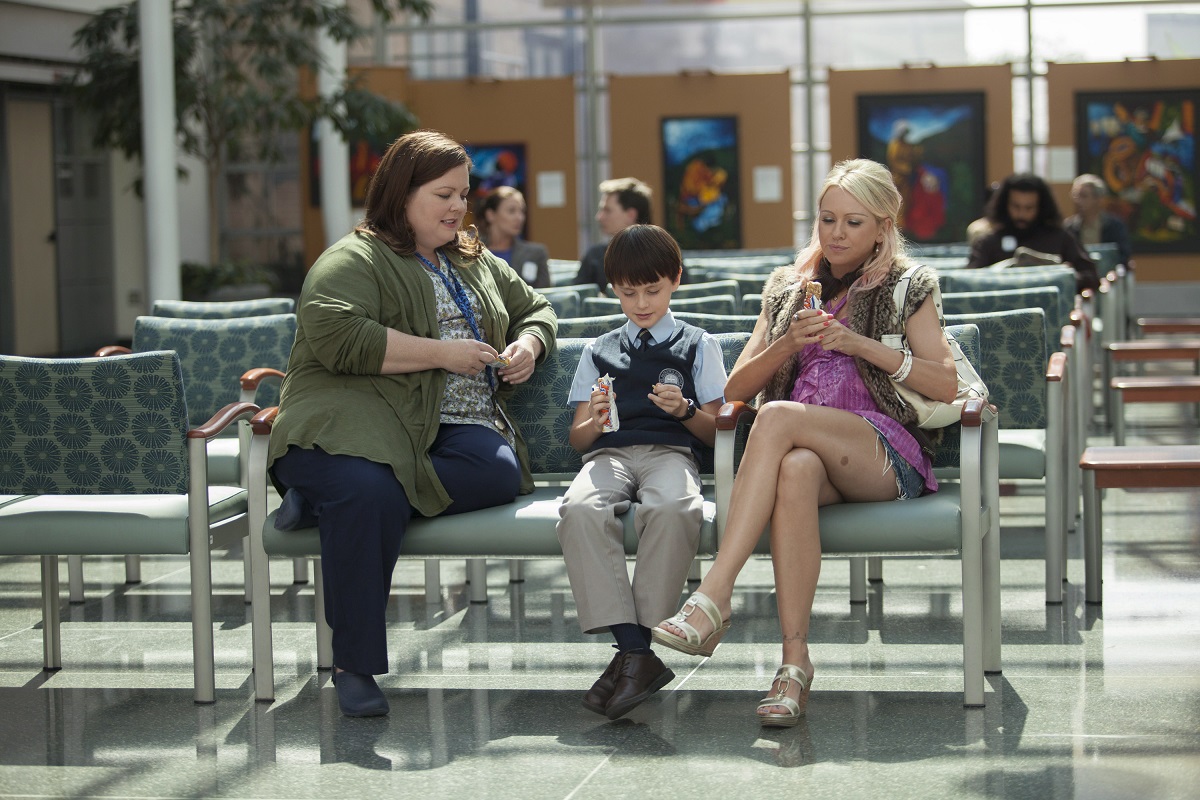 Where in the world did you come up with the character of Daka?

It’s a dangerous character because it could seem completely unrealistic. When we started scouting, we spent a lot of time at Sheepshead Bay, and it has a big Russian population, especially in Coney Island. We went to a few Russian strip clubs and we met twenty Dakas that were literally just like the one in the film. Naomi Watts would send me clips off YouTube that she was using to research her character, and there was one in particular that showed a blonde girl with pink-dyed hair saying, [in Russian accent] “I like to go out with my friends and have good time. I’m very funny person.” That’s Daka. Her words don’t match what you see.

Your use of songs to punctuate various scenes is quite effective, especially during Vincent and Oliver’s dance around the jukebox.

We used Bronze Radio Return’s “Further On” for that scene. Finding music is so much fun. When you’re cutting the movie, there are times when you go, “This feels kind of flat.” Then you put a piece of music in there and you go, “Oh that’s what it needs.” Music and sound is fifty percent of the whole thing. The public doesn’t fully understand that because they don’t know the technical aspects of the process. Once the sound comes into it, it makes the whole thing feel real and full and rich. It can take the audience to another place that a picture can’t on its own.

How did Bill and Jaeden go about building their chemistry?

It gradually happened as they were working. Bill didn’t want to meet him until the day he started shooting, so they did not meet until the first scene they had together. Bill said, “I don’t want to know him until I really know him, and I want to discover him as we go.” They didn’t hang out a lot between takes, but they became really close friends to the point where they both went to do a Cameron Crowe movie in Hawaii afterward and they were scuba-diving and body-surfing together. They became really, really close and it was out of mutual respect for their acting ability. Bill didn’t like Jaeden just because he was a kid. Jaeden earned his respect as an actor and that turned Bill to the bright side.

What did the experience of making this film teach you about comedy?

Comedy can never be manufactured. It either happens or it doesn’t. The same is true of drama. It has to be believable. People need to have a moment that is recognizable. If they don’t have that moment, you can’t create that movie. You can fake it with camera moves, but at the end of the day, you are faking it. It’s seen but not felt. Everyone connected and really listened to each other on this set. I just learned to allow comedy and drama to live and breathe on their own and to never force either of them.