Every Sundance produces a handful of films that create instant buzz with their end credits. I remember when "The Spectacular Now" ended in 2013, reading tweets and hearing word on the street about how great it was. One of this year's most talked-about films was Gillian Robespierre's comedy "Obvious Child," which is opening in limited release this Friday before expanding around the nation. With a star-making performance from the phenomenal Jenny Slate, "Obvious Child" is a smart, funny, and even sweet comedy about a stand-up who goes from heartbroken to pregnant quickly. As Donna Stern, Slate finds an honest approach to character that is so often missing from the comedy genre and Robespierre deftly balances the tones of a story that could so easily have fallen into cliche. Both sat down with us recently in Chicago to discuss Sundance, history, expectations, snarfing, and how they feel about their film being labelled the first "Abortion Comedy."

GILLIAN ROBESPIERRE: It’s always a nice fun mix of fans of Jenny and people who stumble across this movie. So the questions range from "Have you ever acted before?" to "We love you in Parks and Rec!"

Any memorable responses to the film either from last night or in other cities?

The film started to build its buzz at Sundance, and I’ve always been curious how young filmmakers balance being excited to go to Sundance with the marketplace aspect of it all and general nerves. Half the movies that play at Sundance won’t be seen by a wide audience again. You could be bringing this there and that’s the biggest audience you have. Do you allow yourself to be concerned about "how it plays" and "if it sells" or can you not really be worried about that once you’re done with it and actually enjoy Sundance?

GR: We were working so hard to put the press package together, to get our poster finished, to get the colors corrected & sound design—worrying was definitely part of what we did every day but it wasn’t about selling or not selling. Or reaction, even though reaction is something that you hope for when you’re setting out to make a movie—that people connect to the story you’ve worked on for the last five years of your life. But because we were basically a three-person team, I had no time; we had no time. I got there and my plane was delayed. I was stuck in Colorado. I was thinking about getting weed because it’s free. (Laughs). That’s what I thought. When I arrived in Utah the next morning at 5AM, it was sort of like, "We’re here." Our first screening was so exciting and the laughter was almost too intense. A guy in front me snarfed. He was drinking soda and he choked and it came out of his nose. "Maybe they do like it."

Did you have a similar response? Were you surprised at how well it was received?

JENNY SLATE: I always really liked it. What the difference was that when I finished making the movie it had been such a good experience for me that I told myself to experience it like "this" and remember it "this way." I didn’t want to have that satisfaction and that true sense of this meaning this good thing to me taken away or washed down while I was waiting to see if the movie would become something else. I was protective over my mindset. I told myself that since my job was done, there was nothing I could do. It went from being private to something that obviously wasn’t. I was excited to share but surprised that it worked so well since it seemed so private when we made it. It kind of felt like a dream.

And so much has happened since Sundance. The film is coming out now. You had certain expectations going to Park City, but what are those expectations today? The fact is that it’s a crowded Summer season for both blockbusters and indie films. We’re reviewing over a dozen films the day that yours comes out. Have you allowed yourself to think about what happens to the movie now or is that out of your control?

GR: I don’t think anything’s out of my control because I’m a control freak. I do understand that this is literally out of my control. We did hard work to make this movie. We sold it to a distributor who’s really excited and energetic about putting it on big screens. We campaigned the shit out of this movie because we believe in it. After a certain point, you have to let it go.

JS: I think so. I did my work. I’m satisfied with my work. I know I’ll get to work with Gil again and, hopefully, for the rest of my life. So, I know I have that. I have proved to myself that I can do more complex work than I’ve done before. So, I have those things. I can go from there.

Let’s do a little bit of back story. When you go to expand this from a short to feature, did you have Jenny in mind?

GR: 100%. The short was not originally written with Jenny in mind but then when Jenny said yes to it, it really took off. She really understood the characters. She really brought her to life in nuances that only Jenny has. When we sat down in the editing room, it was magical. When we released it on to the internet and festivals—it played Rooftop to 4,000 people! It was scary. I was very shaky. It ignited a conversation that encouraged me to continue and tell it in a bigger way because no one really watches short films. When I sat down to write the feature, it was always going to be for Jenny because she was such an amazing collaborator on the short. She had such an insight into my brain and Donna’s brain that it was never going to be any other way. 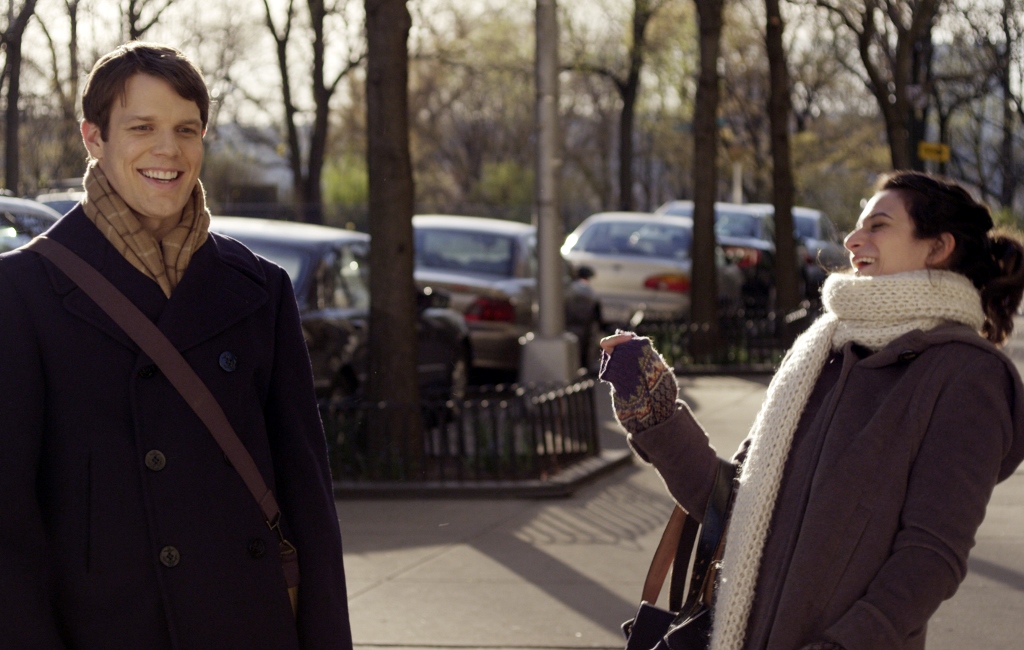 And how involved are you, Jenny, in the writing process?

JS: Gil and Liz would send me drafts. I really liked…it just kept getting better and better. The only time that I really poked my head into it was when we were discussing how the stand-up would be done. That was a long, complex process. Not difficult, just complex. Gillian had written the stand-up. It was very, very funny, and it was LONG. The three blocks of stand-up have a general state of being that they convey.

JS: Yes. They serve that purpose. And so, I would think that she wrote all of this for a purpose and so it needs to be in there but it’s a 45-minute set. Then we went to San Francisco and workshopped the script and, going off the stand-up that Gillian had written, I got up in front of her and Gaby and Liz and did an improvised set using what from Gillian’s that I remembered and creating new. Gil recorded that and wrote off of that. So we had that build. And then, on the day that we shot, I had not memorized it because I didn’t want to have it memorized because I don’t memorize my own stand-up. Those holes—those are when your brain makes emergency webbing and those are really funny.

Natural, and very funny. Also, when Donna is searching for the words, Jenny is too.

JS: I watch it sometimes and I’m like "I don’t understand how that all…" But I do because Gil was guiding me. She would shout "Go back to that!" And I would go back to that. And I was doing a set for all of these people. And it was 6 in the morning. I would find my way back. I would do other thing. It’s not what Meisner is but it’s cyclical. It kept building on itself.

GR: In the editing room, while Jenny is finding "her way back," those are the great moments on film.

I had a question down that you seem to have answered which was "How do you write stand-up that doesn’t feel forced?" because we’ve ALL seen stand-up on film that just doesn’t seem natural.

JS: Yeah, and it’s a bummer. I started doing stand-up. I don’t want to do bad stand-up in a movie. I had no problem lending my own style to the character. There are a couple of my jokes, that I do, that are in this movie. They were so perfect for it, and they probably were inserted probably as finding my way back to the script. But those jokes I came to like more after I did them in the movie. Now I understand them more. 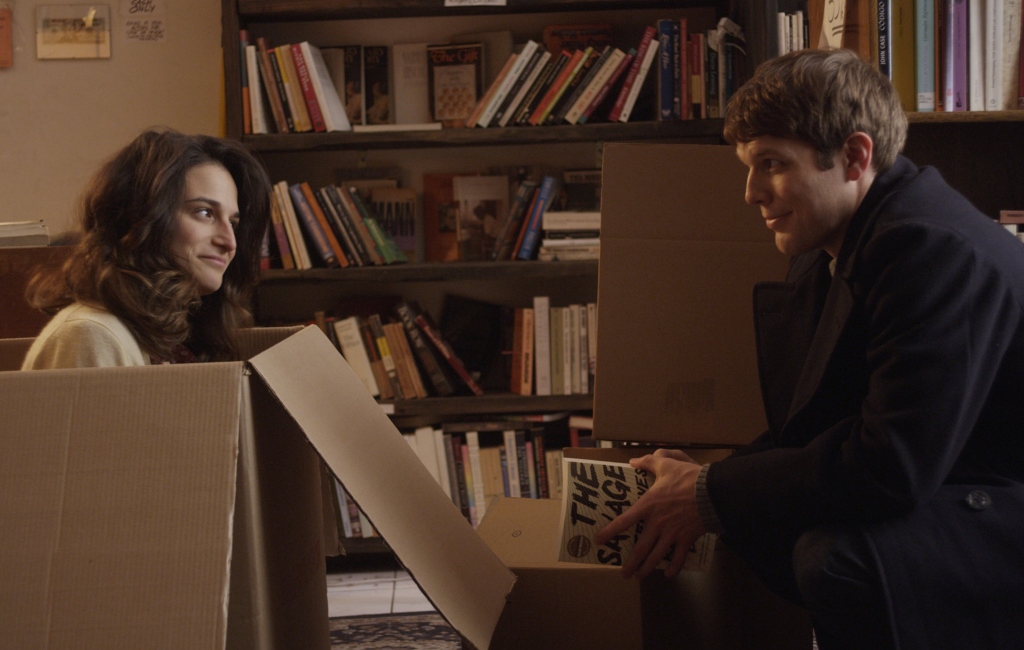 The kind of collaborative process for those scenes—is that applicable to any of the rest of the film or are the non-stand-up scenes more script locked-in?

JS: Gil is confident enough that she doesn’t treat her words as it HAS to be that…that’s a sign of someone who’s afraid. I think we’re both control freaks in our own ways. We CANNOT be late. (Laughs.) I think Gil hired actors who were curious enough to at times wonder if something should be said a different way. We had very little rehearsal time and 18 days of shooting. So, on the set, there would occasionally be…"She wouldn’t say it like that." "I feel like we’re missing a moment."

On the poster there, "The most winning abortion-themed rom-com," and I’ve seen the phrase "Abortion Comedy" used to describe the film. By the end of the press for "Her," Spike Jonze was clearly frustrated by how the shorthand descriptions of the "film about the guy who falls in love with Siri" were diminishing his film. Do you feel "Abortion Comedy" isn’t really giving people the complete picture? That it’s reductive?

JS: Yeah, I don’t like it. I don’t like it. I think it misrepresents us. It makes us seem like we’re being flippant or glib or thoughtless or rough. And we’re not. The movie is certainly very thoughtful and soulful and very, very energetic. I understand that it’s a hook and I get it, but I think there’s so much more in the movie that to single it out that way or distill it in that fashion is not correct. Whatever. Once people see the movie…

GR: Hopefully, they see the movie with so many movies opening! Argh.

Before I go, any more "Marcel the Shell" stuff coming?

JS: We have our second picture book coming out November 4th. And there will be a new short when it comes out. Dean, my husband, and I are in the very early stages of developing it into a feature.

And you said you want to work with her again. Is there something specific?

GR: Yes. My producer Elizabeth Holm and I are going to pen together a movie this summer.