Interview: Paul Scheer of "How Did This Get Made?"

You may know Paul Scheer from many things. Some of you may remember him as one of the talking comic heads who populated VH1’s weekly, pop-culture roundup show "Best Week Ever" or as part of the MTV sketch-comedy trio "Human Giant," with Rob Huebel and future "Parks and Recreation" star Aziz Ansari.

These days, his gap-toothed mug can be seen in several things. He plays hipster whipping boy Andre on the FXX sitcom "The League." He created and stars in the Adult Swim police-procedural parody "NTSF:SD:SUV." He also has done the web series "The ArScheerio Paul Show," where he impersonates Arsenio Hall and recreates some of the talk-show host’s infamous interviews from the ‘90s. (He was also fortunate enough to do his impersonation in front of the man before Hall’s talk-show return was cancelled recently.)

Scheer appears regularly on "How Did This Get Made?," perhaps the funniest movie podcast that’s out there on the Interwebs. Found over on the Earwolf podcast network, Scheer shares hosting duties with his wife, actress June Diane Raphael (who co-stars with Scheer on "NTSF:SD:SUV"), and good buddy, actor Jason Mantzoukas (who co-stars with Scheer on "The League"). Together, they skewer and deconstruct a bad movie on each episode, usually with help from a special-guest funny person (or, in the case of films like "Crank" or "Punisher: War Zone," the actual director of the film). Amy Schumer, Chris Hardwick, Patton Oswalt, Kevin Smith and Damon Lindelof are just few of the people who’ve joined in on the lampooning. They even had Vanilla Ice come in and explain what was he thinking when he made "Cool as Ice."

I contacted Scheer via email to discuss the show and asked if the actors and filmmakers he and his co-hosts have verbally slapped around have come gunning for them.

Let’s start with the obvious: How did you come up with the show?

The show was started over drinks. June and I were telling Jason about how batshit insane "Wall Street: Money Never Sleeps" was, because we’re all lovers of these “so bad it’s good” type of films, and when we were done, Jason said, “That’s a podcast.” And we said, “Do it with us.” He said yeah and we got hooked up with Earwolf and just started recording. 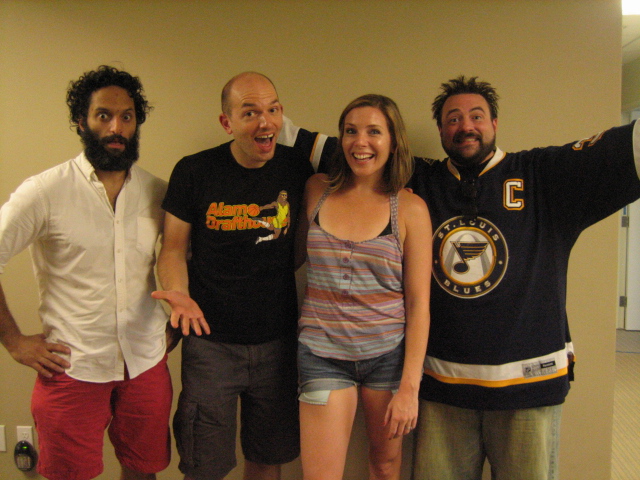 It's an interesting dynamic you, June and Jason have. It's like Jason is the aggressive id, June is the understanding super-ego and you’re the ego in the middle, mediating between them. Is that the dynamic you were looking for, or did it just form like that over time?

Wow! That’s the most articulate way to describe our dynamic. I’m going to steal that from you. It definitely wasn’t a conscious thought—we weren’t trying to play into any roles. We just got lucky. It was just the right meshing of personalities. I think, oddly now, the audience really expects us to play into these roles. And when we do live shows, we sometimes get applause breaks for saying something “in character.” Also, at the root of it, all of us are coming from a place of pure enjoyment and befuddlement and not anger. Which I think helps keep the show more playful—this isn’t a film criticism class. It really is a celebration of these movies that didn’t quite work.

Where did the idea of bringing in a guest come into play?

That was very much at the very beginning of the idea. We started the show relatively early in the podcasting boom and it seemed that every podcast had to have a guest. But I was pretty adamant that we never should interview them. There are a ton of great interview shows out there. This would just be getting good guests and letting them be funny. 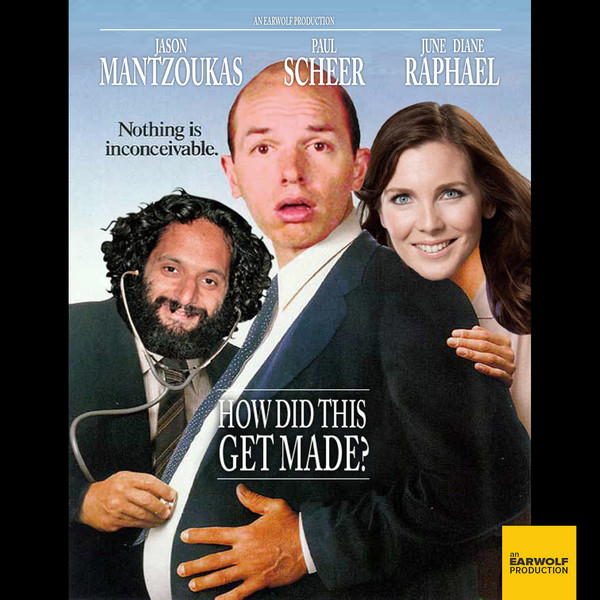 I like how you guys often break down the difference between a bad film and an entertainingly bad film. The best episodes are often the ones where you all are relishing how insanely entertaining the movie was. Do you agree?

For sure. I think when we watch a “bad” bad movie, we come in almost drained by the experience, like, ugh, we have to relive this piece of shit. Whereas a “good” bad movie works in the opposite way—it energizes us. We don’t purposely pick “bad” bad films. It’s a bit like Russian roulette, since we don’t have time to vet every movie before we record. We just pick from this long list and, sometimes, what might look like a perfectly bad movie on paper sometimes turns out to be just a boring bad movie, which is interminable. It’s really tough to give a general rule that divides the two types.

There have also been moments, like the ep where you three and Tim Heidecker reviewed "The Odd Life of Timothy Green," where you all were divided on whether or not the movie was really bad. How much do those eps take you by surprise?

BIG TIME! This was a movie that June and I saw actually saw in the theaters and thought, THIS IS PERFECT for the podcast. I was so excited to bring this one in and I even held it for Tim, who I think is one of the funniest people I know, because I thought, he’s going to love hating this. And then surprise—not only did Tim like it but so did JASON! My mind was blown, but what I love about this episode is that we let that disagreement happen. It’s how we really feel, which is true for the "Fast & Furious" films and "Crank." We definitely like some of the movies we talk about.

Are there movies you’d love to talk about, but fear it might hurt you in the industry?

I don’t think it would “hurt” us, but I think we make decisions not to do things based on some of our personal relationships. And we also, as a rule, stay away from a lot of comedies (unless they star an action star or wrestler). 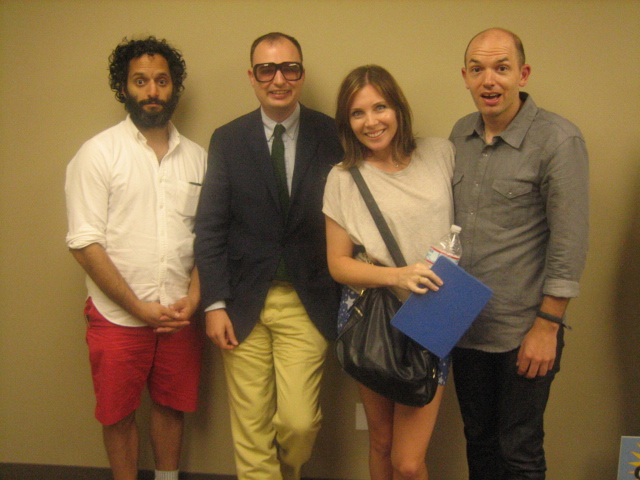 You've had "director's edition" episodes where you've had filmmakers on to discuss their films. Is it surprising when you get filmmakers to talk about projects? And what’s the surprising thing a director has disclosed?

Oh, I love those. I wanna do more of them. I think Lexi Alexander’s episode about "Punisher: War Zone" was the most telling. You really saw how her spot-on instincts were just twisted and turned by the studio at every step. It really left her not being able to fully execute what she exactly wanted in the film.

Case in point: not being able to cast Freddie Prinze, Jr. as Jigsaw, even though he gave the best audition. But, still, she created a kickass movie, which we all really loved. But she was so candid and personal. I think it’s great for any aspiring director to hear. Definitely one of my faves.

Have you've gotten feedback from the actors or filmmakers of the films you've lambasted?

Thankfully, we have avoided any uncomfortable interactions with directors and stars, but if we bump into Nic Cage he might beat us up in an alley (which would be awesome). But seriously, if someone heard us talking about their movie on the show, I think they’d see it’s pretty good-natured and we aren’t trying to be dicks. We love these movies and are just genuinely befuddled by some of the choices.

On the average, how many listeners/downloads do you get?

I don’t know if Earwolf likes us to give out actual numbers, but I’ll say that I’m literally blown away by the downloads we get and how large our audience has become. We’ve been really lucky to have great fans. If you want something more specific, I can add that we always get an in the top 10 iTunes comedy podcast downloads with a new episode—if that means anything.

Would you'd be willing to rip a movie you or June or Jason did? And does doing a show remind you to choose film projects that hopefully won’t turn out to be disasters?

I think that’s the thing—no one thinks, “Oh, we’re making a bad movie.” Millions of dollars are put up because people think it’s an AMAZING movie, literally better than any other script that studio has. So you can’t live your life trying to avoid making a bad movie. It might happen without you knowing it. As far as making fun of our own films, we get asked that a lot. But it goes back to the idea of not wanting to tread on personal relationships. But more importantly, whether we’re in it or involved in it, we aren’t going to have a perspective as an audience member, which is what we have when we watch something like "No Holds Barred." There is no fun in it.

Finally, what do you want people to take with them after listening to "How Did This Get Made"?

To laugh. That’s pretty much why we do it. From the beginning, the goal has always been that this podcast should just feel like sitting around with your friends and talking about bad movies. The audience is the 5th member of that conversation.

(Images courtesy of Earwolf and FXX.)