When top British fashion model Agyness Deyn announced that she was going to be leaving the catwalk in 2009 in order to pursue an acting career, it seemed that she would be following in the well-shod footsteps of many before her. Certainly her initial roles were nothing to shout home about—playing a goddess in the awful “Clash of the Titans” remake, a stripper in the English-language remake of Nicolas Winding Refn’s “Pusher” and contributing the voiceover heard at the beginning of Rhianna’s music video for “We Found Love”—but a turn on the West End stage in the play “The Leisure Society” earned her excellent reviews. Then, she got the news that every actress—beginner and seasoned veteran alike—dreams of when she was called in to audition for none other than Terence Davies, one of England’s most celebrated filmmakers, for the leading role in his latest project, a long-gestating adaptation of Lewis Grassic Gibbon’s 1932 novel that is generally considered to be one of the most important Scottish novels of the 20th century. Davies’ films have always supplied strong female roles (think Gena Rowlands in “The Neon Bible,” Gillian Anderson in “The House of Mirth” and Rachel Weisz in “The Deep Blue Sea”) and this story, which followed an ordinary farm girl in the 1910s with a dream of being a teacher, who begins to assert her independence in the face of cruelties dealt by people ranging from her abusive father (Peter Mullan) to the initially sweet young man (Kevin Guthrie) who falls in love with her marries her, only to come back from the horrors of World War I irrevocably changed. When Deyn won the part, there were undoubtedly a few eyebrows raised in curiosity, wondering what exactly it was in Deyn that suggested that she was right for the part.

Those doubters could not have been more wrong in their misgivings as they tried because from the moment “Sunset Song” started screening, Deyn’s performance was singled out for the kind of critical hosannas that most actresses go an entire career without seeing. There are few emotional notes that the character of Chris is not asked to enact during the film and Deyn does not miss a single one of them. Maybe the closest performance I can compare it to is what the also-unknown Nastassja Kinski did when given the title role in Roman Polanski’s “Tess”—and if all goes well, it should be the kickoff to a sterling career.

To promote the DVD release of “Sunset Song,” Deyn recently got on the phone and we talked about the film, her affinity with the character of Chris and the privilege of working with Terence Davies.

Do you recall what the first movie was that you saw that really stood out and meant something to you other than simply a couple of hours of mere entertainment?

Which one—there have been so many. I would probably say “Breathless,” because that was one that I saw when I was very young and that kind of opened me to more than just English films.

Before you became an actress, you were, of course, a top fashion model. Was acting something that you had been contemplating doing even during your modeling days?

It came later. It seems like a natural progression, not just from modeling to acting but on a personal level—a kind of growing from a young woman into a woman and assessing what is important and what kind of fulfillment you get from your job. Acting, both emotionally and psychologically, is very rewarding for me.

Before coming onto “Sunset Song,” did you have any previous knowledge of either the book or of Terence Davies and his considerable cinematic output?

I loved Terence’s work. That was the one thing that, when I got the opportunity to read the script, I was so excited because I loved his work. He is a fellow Northerner like myself, so watching “Distant Voices, Still Lives” had a real impact on me as a Northerner. I’d watch his films because the way he tells his stories is so powerful.

What was there about the role of Chris that served as a particular draw to you?

I just think it was so inspiring as a young woman to read a script where she is not a victim. She is powerful in a genteel way with a kind of hidden strength unbeknownst to her. As a woman watching films, that is the kind of film that I want to watch. When I read the script and then read the book, I just fell in love with her as a woman and how courageous and forgiving and how much fight she has, but in a very understated way.

While watching the film, what stuck me was that while it was obviously a period piece through and through, it somehow felt strangely contemporary despite all of those trappings.

I think so too. Obviously the themes that go through the film are prevalent in all periods of time—the family love, summoning your own strength. There are all these kinds of things that everyone goes through as a human being. It has a lot of humanity in it. 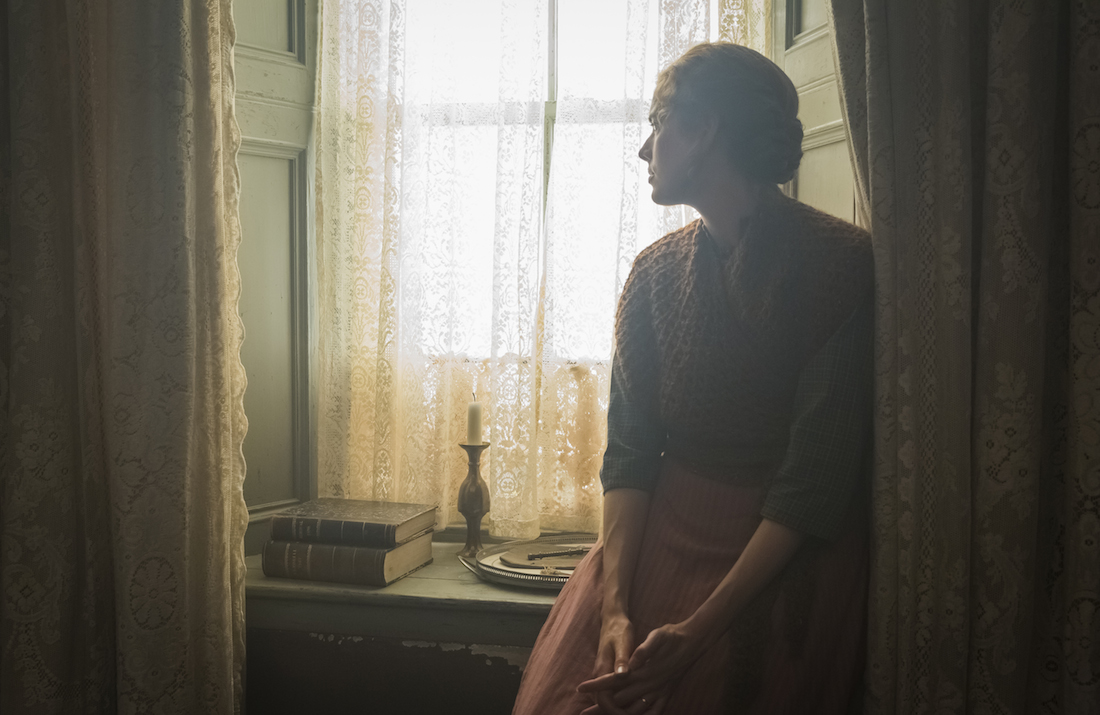 What was the biggest challenge for you in portraying Chris?

I think it was living up to Terence’s expectations of what Chris meant to him. If you have so much affinity and respect for somebody, you just want to do them proud. I think during the filming, all I wanted to do was be my best for myself but also for Terence because he is such an inspiring person. It was really life-changing working for him and I think I felt like I owed him a great job and a kind of mirroring of his imagination of who she is.

What kind of research, if any, did you end up doing to help put yourself into the character of Chris?

I had the script and I had the book and I constantly referenced them from the moment I first read the script and even when we finished the film, I still constantly read them. I really wanted to get into her headspace and by having the book, that gave me her soul and imagination and everyday life, which was so helpful. I learned to ride a horse—not because I would have to but because she would know how to do such things. I did as much as I could so that I could have as much reality as I could with her so that I wouldn’t have to act.

Over the years, there have been many cases of models going into acting with varying degrees of success. Obviously from the acclaim that your performance has received, you pulled off the transition but did you ever have a sense of any kind of prejudice about going from one to the other while working on this film?

I didn’t, actually. I only start thinking about that when other people bring up the question. I have my attention on doing the work and being prepared and doing the best job that I possibly could—not because I used to be a model but but because I want to do the best work that I can at being an actress. That was very much a distant thought that rarely penetrated what I was doing. Working with Terence, he makes you feel so good about what you are doing, it fills you with such confidence that you walk away knowing that you have done everything that you possibly can.

What'd you think when you finally saw the completed film for the first time?

I tried to watch it in an objective kind of way but you watch it and you are so invested in it in so many ways. You are moved by it because you felt it in the moment. It is a very complex kind of experience watching something when you’ve played a part where you've put everything into it. I watched it feeling very proud of Terence and the other actors and grateful that I had this opportunity. To be honest, even when I was offered the part, I knew that this was a thing that was going to be meaningful and not like any other film. This was going to be special.