A van of grungy, free-spiritied teenagers travels across America's midwest. They're in search of the next thing, the next experience or amusement, while sticking together as a family. To be able to keep doing this, they sell empty magazine subscriptions to strangers during the day, their dreams of running wild off the grid always in service of a master (Riley Keough's Krystal). Writer/director Andrea Arnold's "American Honey" uses its 4:3 scope and 160-minute length to ambitiously create a poetry no shorter than exploring what America means.

The breakout of the group is debut actress Sasha Lane, who plays the lead character and our surrogate into the experience, Star. "American Honey" begins with her digging through a dumpster for food, until she is discovered by the group (led by Krystal and her assistant, played by Shia LaBeouf) and brought into the family. As Lane explains herself, it wasn't an origin too different from being brought into the filmmaking of "American Honey" itself.

In a phone interview, RogerEbert.com talked with Lane about the film, how the project gave her hope, why we can't treat a presidential election as a business deal and much more.

What was a typical day of shooting like for you?

It was real early [laughs]. I don’t even know how to answer that. Everyday was something new and I didn’t really know what was going on, but [director Andrea Arnold] kept it as small as possible. And there was always a lot of good energy and feeding off of each other, and a lot of support and love while we were filming. And then we’d get done and we’d laugh and hang out in the parking lot together.

How did Andrea Arnold prove that she got America and being young in America? What was the first moment where it was like, “Oh, she knows what she’s talking about. She can tell this story”?

It’s so weird, because even certain things that I’d see I’d be like, “What?” Like, “How is that going to come across?” And it came across so well. She’s so empathetic and she’s so open that you just have to kind of trust her. And of course, from the very beginning, how I’m digging through a dumpster and there’s the things at home, all of these situations that were all so true. So you were just like, “You got it.” And she was not the type of person who wanted to speak on something that she had no idea, you know?

The music within "American Honey" is so distinct as well. Did she come to you guys with the music?

She traveled around America a bit, and she found me on a beach during spring break, so she knew what everyone was listening to. She had her ideas and she would ask us, “What are you listening to? What do you want to hear?” Things like that. It was just a consistent, “This is what people are listening to, these are the kids who are in this van are listening to, hopefully we can get it.”

When you’re in the van and it’s like you say very small and feeding off energy, is Andrea with you? And how does she direct you?

[Laughs] She was in the trunk of the van pretty much. And she is like peeking over the chairs. Like, “Um, do this,” or “I want you to say that.” And then she’s just watching her little monitor, hunched back. She was literally in the trunk, the actual trunk of that car that we used.

I’m really curious as to the behind-the-scenes accommodations of the film. When you’re in this world, were you eating whatever they were eating, or staying where they were staying?

We definitely stayed in those motels, and we drove around in that van. And if we weren’t at that motel, we were probably at the motel across the street, probably the shittier one. We went to the gas station that was around town, or there was a catfish joint in Oklahoma and we had fried catfish and okra every night. There was a catering guy who went with us. Either way you were still in it. There was no trailer, no going home to just yourself-type stuff.

That’s pretty amazing to have that film experience, where it’s so potent like that.

It helped. You’re constantly in this zone. I didn’t even talk to anyone outside of it. I didn’t want to.

When you were settling into the character, did you develop more details about her than what was shown?

No, it’s more that I just happened to connect with her. And all I knew was that she came from a broken family and she really takes care of her siblings and she goes on this kind of adventure. And you would pick up on it as you went along.

What kind of energy does Shia LaBeouf bring as a collaborator, especially with your new experience and his years of experience?

He let me do it. He let me be how I was, and respected that. We would just bounce off of each other, and he was in it as much as we were in it so there was just a constant feeding of energy and a respect for everyone’s ways.

You have a line in the movie where you outwardly say, "I feel like I'm fucking America," in a movie that can be pretty direct with its metaphors or symbolism when talking about this country.

I feel like it was more of a ... she’ll drop poetic words. You just feel it. I know that part, so it was in me anyway. In that moment of “I feel like I’m fucking America” it was like a free moment, how I felt. [Andrea] lets that happen, and little things that she’ll explain. But it’s still a hidden message, it’s all complicated anyways. It’s beautiful and chaotic. 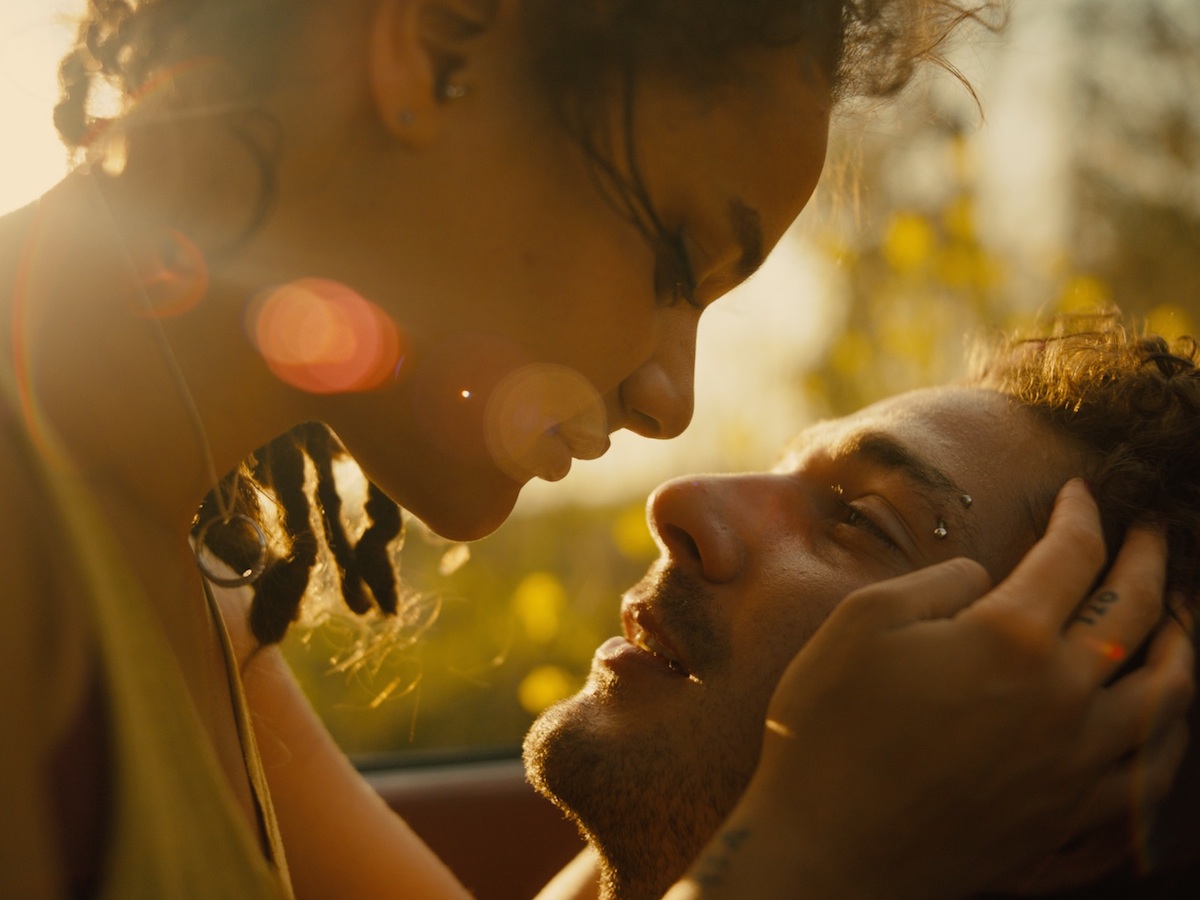 At the end of making this film, how were you different?

It’s just that you have hope now, you know? You have hope. And now I know that ... that I can take control and I don’t have to be what I came from, and anything can happen. Which is how she felt, and how I felt, and that’s why the ending of the movie is so important to me.

How important is hope to you now, as a person, and to what you want other people to feel?

It’s so much. Just to think of where I was mentally before and where I was mentally now, it really opened up everything. And it gives me this sense of, “Yeah, you can take it on and you don’t have to be this or do that,” or that you can keep at it, no matter how many people or different life situations tell you no.

It was like this switch in you. It started for me when Andrea found me and when she said everything about me internally and externally was beautiful. There was a light, it was like “Oh, wow.” And this way that it’s been progressing and the love that’s been shared. It can be such an important part if we need it. You’ve got to hold onto something, and you’ve got to believe in something.

How do you feel you’ll take this experience into the future, as an actress and simply as a human being?

I feel like I can go about it my way. I found a different route. There’s always another way that you can do it. And the connections I made with Andrea, the connections I made with [cinematographer Robbie Ryan]. And it’s like, yeah I need that. I need that feeling to continue things. I want to be able to connect with things, because this is what you are able to do when you connect with something. It can be beautiful and create things like “American Honey.”

It’s a very interesting starting point for a career, like setting a new standard.

Yeah! I wouldn’t have wanted to come into this in any other way, with any other movie with any other types of people, you know? It was perfect just as it was supposed to be.

What’s the story of you being found?

I was on the beach during spring break. And like honestly, the whole thing of it is that I had nothing left to lose at that point. I didn’t have any hope at that point, but I had the feeling that something really amazing was going to happen. And when I met [Andrea] I felt whole, like it was meant to happen, and I didn’t have a lot of fear, because it was like, “What are you going to go back and do? What are you missing out on?” Nothing. So, get in the car.

It is that idea just like Star in the beginning, where you go with the people and try to get on their wavelength.

Exactly. And they look like they’re this connected family, and there’s something in that. I wanted to know that and I wanted to be a part of that and experience that.

With your experience traveling through different parts of the nation and first-hand presenting a disillusioned America, could you see how our nation could feasibly elect Trump for president?

Yeah, because I grew up in that part. And even if I hadn’t been to those places I know that life, I know those types of people and all of that. The whole Trump thing is why this needs to be shared, and why it’s like, you can’t make being president a business deal. You’ve got to think a little more personal than that, because people’s lives are at stake.

There’s this fear of the other that seems to be stoked. A despair and a lack of hope, both seem to be huge elements at stake.

Yeah, and a lack of opportunity. And a lack of looking at a person as a person, and being like, “You deserve to be seen and loved.” People need to be open and they have to open up and be empathetic and they’ve got to understand and stop letting all of these blockers from experiencing all of these people and experiencing these parts. And also, since it’s such shit, you’ve got to find your own beauty. Or otherwise you’re going to let the darkness take over. So that’s such an important part. Like, look, this is what we’ve been given. It’s not a lot of this, not a lot of that. So I’m going to find the beauty in this, and I’m going to look at that person’s soul and see them for who they really are, and not just from the outside.