Documentarian Rodney Ascher has created a distinct authorship by collecting experiences of people interacting with the bizarre. In 2010, he directed the short "The S from Hell," which shared various memories that people had about the oddly-disturbing Screen Gems logo that followed TV shows like "The Partridge Family" or "The Flintstones." His feature documentary debut, 2012's "Room 237," earned cult status by carving various rabbit holes of conspiracy theories about Stanley Kubrick's "The Shining," in which off-screen voices vigorously interpret the most minute details of the film to references of the Holocaust, or the moon landing, among many others.

For his follow-up, Ascher points his camera to the real terror of sleep paralysis, in which thousands become helpless to escape sinister visions that appear during their slumber. It is a phenomenon that has confounded cultures for centuries, and as this documentary notes, can be passed along simply by talking about it. The horror-doc hybrid “The Nightmare" shares the scarring experiences (and trends) of sleep paralysis, while reimagining them with thrilling live-action presentations.

After premiering at the Sundance Film Festival and also SXSW, “The Nightmare” is now set for a limited theatrical release and VOD this Friday, June 5. Rodney Ascher talked to RogerEbert.com about the making of his film, his own experience with sleep paralysis, whether he reads criticism on his work, and more.

Aside from the eeriness of its subject matter, “The Nightmare”has the unusual appeal of being a feature length assembly of first-hand experiences that might be able to really scare people.

It doesn’t feel that unusual to me, I grew up watching "In Search Of ... " [laughs]. The notion that these are real people and these are real stories, that makes the horror more effective. And, horror is the language that people are talking about with these experiences, that it’s as scary as a horror movie or like one. And then the reverse is true. I thought that was very interesting. [It] brings to me all sorts of questions. Where do these images from horror movies come from? Are they drawing on common experience, and then affecting the next generation? 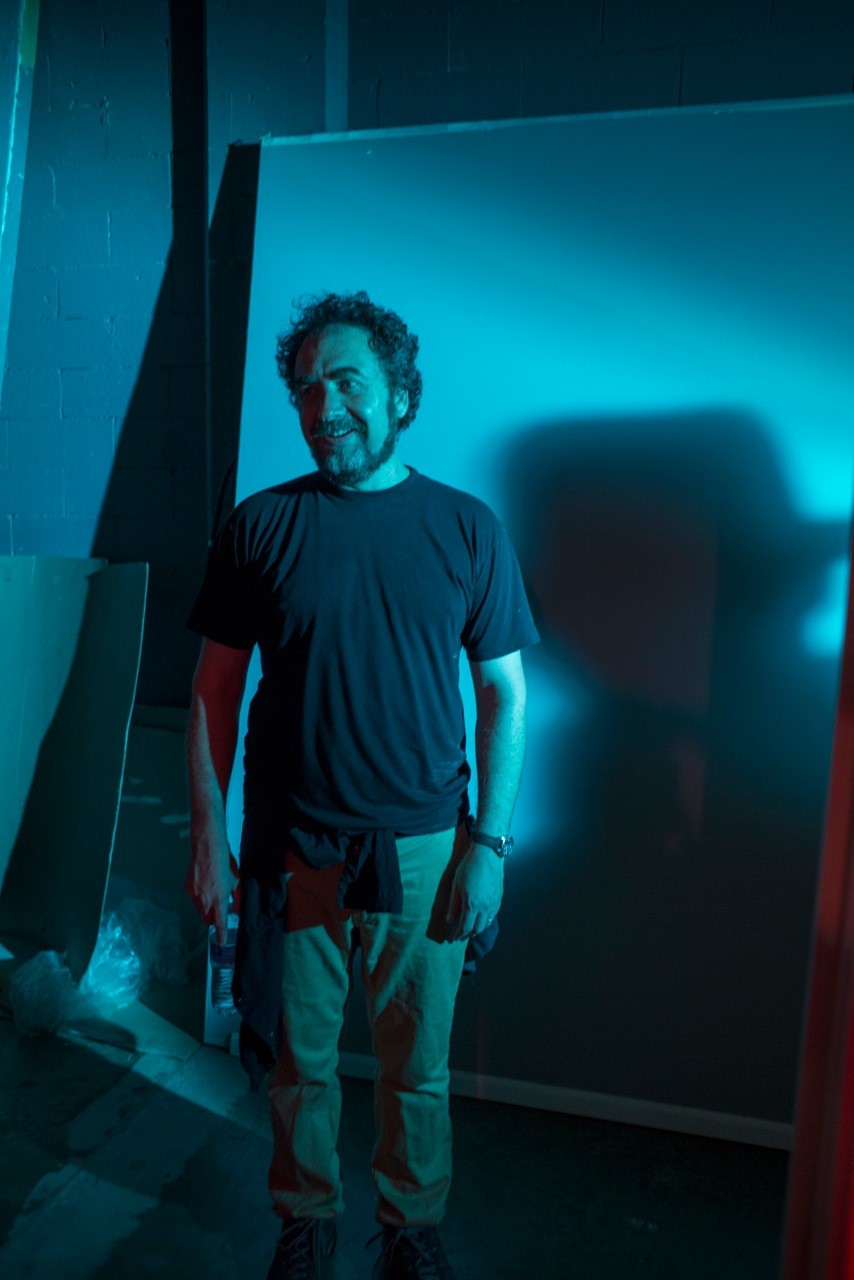 What significant experiences have you had with sleep paralysis, or terrible nightmares in general?

I don’t know that I’ve ever had too many incredibly disturbing nightmares. I don’t remember my dreams too often, though one in particular that will stick me with me is a kid's cartoon show, and I still remember the theme song. As far as sleep paralysis goes, I have probably had it three or four times in my life, and the first one is the one that stays with you. It is the reason that I made this movie. It was the scariest thing that happened in my life. The sleep paralysis was very much like how it we represent it in the movie. I had roommates that I was trying to call out to, and make a sound. And one of those shadowy ghost people, the very clear ones with the well-designed lines, appeared in my room. It was eerie because I had a window that looked over the woods, and at the time I had some really creepy, stark painting near the window that was sort of backlit, and the shadow man kind of came from the side of that. I thought it was moving over me in some type of judgment, and it was years before I found out that it is the phenomenon that I now know as sleep paralysis. I would have said at that time "supernatural visitations."

When vetting your subjects, what’s the limit to what you’d accept in terms of believability in their stories?

Well, we stretched pretty far in that some of the stories aren’t about sleep paralysis, but they are interesting sort of childhood experiences that seem to foreshadow sleep paralysis. If that had only happened to one person, I might have felt less sternly about keeping them in, but that three people had these experiences was really interesting and really provocative to me. And if you’re talking about verification, it was gut level - did this person seem genuine, tell this in a compelling way?Some folks in the pre-interview process came off as less persuasive, and I have no idea why that would be. I know I tell stories sometimes and I don't believe it myself. But there’s not much more to go on. If somebody tells a story, you look in their eyes, you see if they are persuasive and emotional. And also beyond that, there are a hundred of stories that we read and dozens of people that I Skyped with. I was talking to people, and my producers were, and we had researchers who were finding people. There were some common tropes that we wanted to include, but there were also some people who had really one-of-a-kind experiences, so there’s the middle ground of that classic experience. But we also wanted the representations of some of the other dreams that were more unique or original.

In terms of the artistic liberties within your recreations of their dreams, what was most important to you?

There’s certainly liberties there, though I kind of think that most of those will be clear to the viewer. When you are doing a dramatic recreation in general, for me it was important not to make it look like surveillance footage, and I can imagine setting it up and trying to persuade the audience that we had a camera that could record shadow people. But when doing a doc like this, my obligation to the truth is being upfront to the artifice, and that goes to the way we shot the reenactments. I wanted them to took good but I was perfectly comfortable with that artificial, theatrical quality. I like that middle ground.

“Room 237”didn’t interview the people behind the making of “The Shining,”you also don’t have any footage in this film of scientific experts offering their two cents on sleep paralysis. What were your thoughts in eschewing that particular angle?

There’s a lot of ways that you can approach sleep paralysis as a topic. Science is one of them, along with history, art, mythology, psychology. Or Freudian dream analysis and the collective unconscious. At a certain point what I found most compelling were first-person eyewitness accounts. I was more interested in hearing their search for answers, and the way it might have changed their life.

Did you consult any experts off-camera about the subject?

I talked to a couple. There’s one that I talked to one the phone, and I read a half-dozen books and as much research that I could understand. Though at a certain point, neurology papers become something else. I have a BA in psychology that’s 20 years old, but I’m not an expert in brain chemistry. I was interested to discover as much of it as I could. For books on the subject, I would recommend Shelley Adler's "Sleep Paralysis: Night-mares, Nocebos, and the Mind-Body Connection." And I was just corresponding with Brian Sharpless, who has a new co-written book coming out: "Sleep Paralysis: Historical, Psychological, and Medical Perspectives" which looks really good and meaty. But even with those books, [Shelley] is a clinical psychologist, more than half of her books are about cultural and personal components of this stuff.

When initially putting this story together, did you pursue the idea of trying to film your subjects experiencing sleep paralysis?

There were ideas that we talked about. Like setting up surveillance, and using baby cameras, which turned out to be the most practical notion, because they record for hours and hours and they’re cheap. But when people have sleep paralysis it's unpredictable. However, there is a quick shot [in “The Nightmare”] of Chris in the midst of sleep paralysis that his girlfriend shot for us because he was describing that fast, head-shaky, blurry thing that I first saw in Aphex Twin videos, and also in ”Jacob’s Ladder.”[Chris] said that’s was what it felt like for him when he was coming out of an experience. But also, a lot of the folks that are in the movie are doing much better now.

A great deal of criticism was written about

“Room 237”[including two pieces by Jim Emerson for RogerEbert.com, here and here.] Did you read a lot of what was written about the film?

I read a lot of it. Clearly, both of these movies are the product of a guy who reads a lot of comment threads [laughs]. So I was very curious about what people thought of it. And in a way that one was a little safer than that one. It’s the notion of that people watch the same movie differently, it’s an inoculation against that negative criticism; the whole idea is that some people hate this movie. But that’s just like the way they treated "The Shining”; some people loved it, some people hated it. This one is a little more personal, I’m in it more, and it’s a little more human with actually seeing the faces of the people who appear in it. So I’ll probably be well-advised for this one [laughs].

What did you take away from the experience of working on “Room 237” that influenced what you wanted to do with "The Nightmare"?

I wanted to create more images myself. I wanted to go into the studio and shoot live-action myself and see if I could learn anything from what I saw in "The Shining." But this is a very low-budget movie that was shot in about two weeks, it wasn't as if we were able to emulate the shooting schedule of "The Shining" [laughs]. But that was a challenge that I wanted to do myself this go-around, as much as I love working with archival footage.

How close, or appetizing, does a narrative feature project seem to you?

I’m not sure what I’m doing next. The things that I’m looking at, or trying to develop, are docs, or are closer to a straightforward narrative. I don’t know if I’ve been doing this long enough to have a pattern to the way that I work. But after “Room 237,” I was poking at a few things before it became clear that "The Nightmare" was what I would do. I’m still poking. But then after I would have to trick somebody to pay for it [laughs].

After sharing with viewers these first-hand accounts of sleep paralysis, “The Nightmare”also notes that people have experienced it after simply hearing about it. So far, has anyone expressed this happening possibly because of your film?

Well, one guy said that he got it after watching the trailer. Like a "Halloween III" effect [laughs].