All Roads Lead to This: Edgar Wright on "Baby Driver"

Edgar Wright likes to turn movie genres upside down and inside out. With “Shaun of the Dead,” he turned a zombie film into a coming of age love story.  In “Hot Fuzz” he turned an action movie into a story about home. And “The World’s End” not only upended the apocalypse genre, he switched up the expectations he had created for us in his earlier films about his most frequent stars, casting Simon Pegg as the irresponsible mess and Nick Frost as the stable, reliable character.

Wright does the same with “Baby Driver,” the most stylish adrenalin rush of a film you will see this year. It has eye-popping chases and shoot-outs, a sweet love story, scary bad guys played by Emmy and Oscar-winning actors, and an instant classic soundtrack that ranges from The Jon Spencer Blues Explosion to T Rex, the Beach Boys, Dave Brubeck, and the Simon and Garfunkel song that gives the film its title.

Unlike the long list of movies about long-time criminals facing one last job. “Baby Driver” is about a getaway driver named Baby (Ansel Elgort) who is only 20 and wants to get out of the business. “He’s the opposite of [“Goodfellas’”] Henry Hill,” Wright told an audience in Washington DC following a screening of the film. “He’s been a sort of unpaid intern” working for criminal mastermind Doc (Kevin Spacey). “Hill was a young guy who wanted to get into crime; Baby wants to get out.” Even when Wright made use of a more conventional approach to a character, he added detail for more depth. “You’ve always had the archetype of the strong, silent type in action films. I thought it would be interesting to give a reason why. I hope the movie will make people think about how they hear things and how other people hear things.”

In an interview with RogerEbert.com, Wright talked about the diegetic use of the songs in the movie. Instead of a score that the characters are unaware of, everything the audience hears is what Baby is listening to. In one scene, the LP albums with the songs on the soundtrack are spread out on the floor. “I actually laid them out myself to make sure you could see all the album covers.” 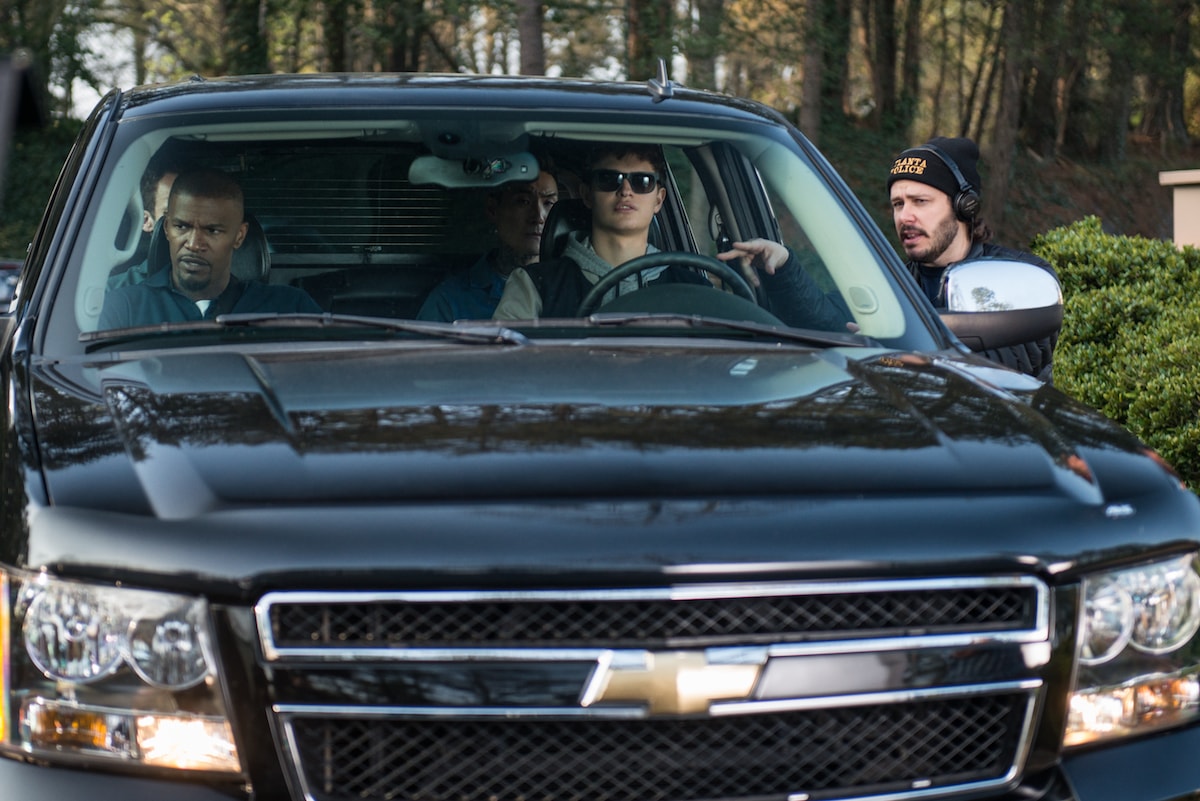 Baby has tinnitus, a constant ringing in his ears, following the car accident that killed his parents. So he listens to music all the time via ear buds connected to his seemingly endless collection of mp3 players. “If you’ve been stealing cars since you were ten years old,” Wright said, “what you have a lot of is what people leave in their cars: mp3 players and sunglasses.” But those two items are symbolic as well. “The headphones and the sunglasses are like a ‘hear no evil, see no evil’ approach. He is using those things to blinker himself to the consequences. And then there’s a key point where he gets his sunglasses knocked off so then at least with one eye he is clearly looking at the problem and what to do about the problem.”

Wright himself had tinnitus as a teenager, though he says he was not as clever as Baby in using music to manage it. But he did listen to a lot of music in his teens and 20’s and picked out the first song in the film, “Bellbottoms” from the Jon Spencer Blues Explosion, as just right for a chase scene. As he worked on other films over the years, Wright said, he just kept hoping that Quentin Tarantino would not use it first.

And as he wrote the screenplay, Wright listened to music. “The songs inspired the movie and some entire scenes are completely dictated by the music. Songs actually dictate what the action was. ‘Bell Bottoms’ is a good example because it has maybe two and a half minutes of buildup to where the actual rock really kicks in. I listened to that track about 22 years ago and straight away thought: ‘Oh, this is the guy sitting outside. The other guys have gone into the bank and then while he’s singing along with the music he is looking at what’s happening in the bank. And then they get out and that’s where the chase starts. The song has these amazing little anchor points of where hero moments are going to happen. Another good example would be the ‘Tequila’ sequence. That particular cover version of ‘Tequila’ has dueling drums in the middle. So I listened to that thinking, ‘Oh this should be a gun fight in the middle of this track.’ So they’re shooting at each other all in time with the drums. Or like ‘Hocus Pocus’ by Focus. That structure is very much like a start and stop guitar instrumental. There’s a very, very fast guitar and driving guitars and then there is a little breakdown with the bit of yodeling. So, it is like, ‘Okay, this is him hiding behind the tree. And now the guitar is starting and now he is running again. Then the next breakdown with more yodeling, he is in the department store and he is trying on a different jacket. Next thing the guitar kicks in again then there’s kind of an accordion breakdown and it is him breaking into a car. Then the guitar starts again and now he is driving that car. So we are letting the structure of the song dictate the scene.”

Baby uses the music to help him design the timing, even the choreography of his getaways.  At one point he has to rewind the song before he can begin driving. “The second getaway is interrupted twice by people trying to catch them. So as such his timing is off. And then when he gets into a new car, he literally gets back on track. He literally rewinds to the final verse and chorus before he can go.” 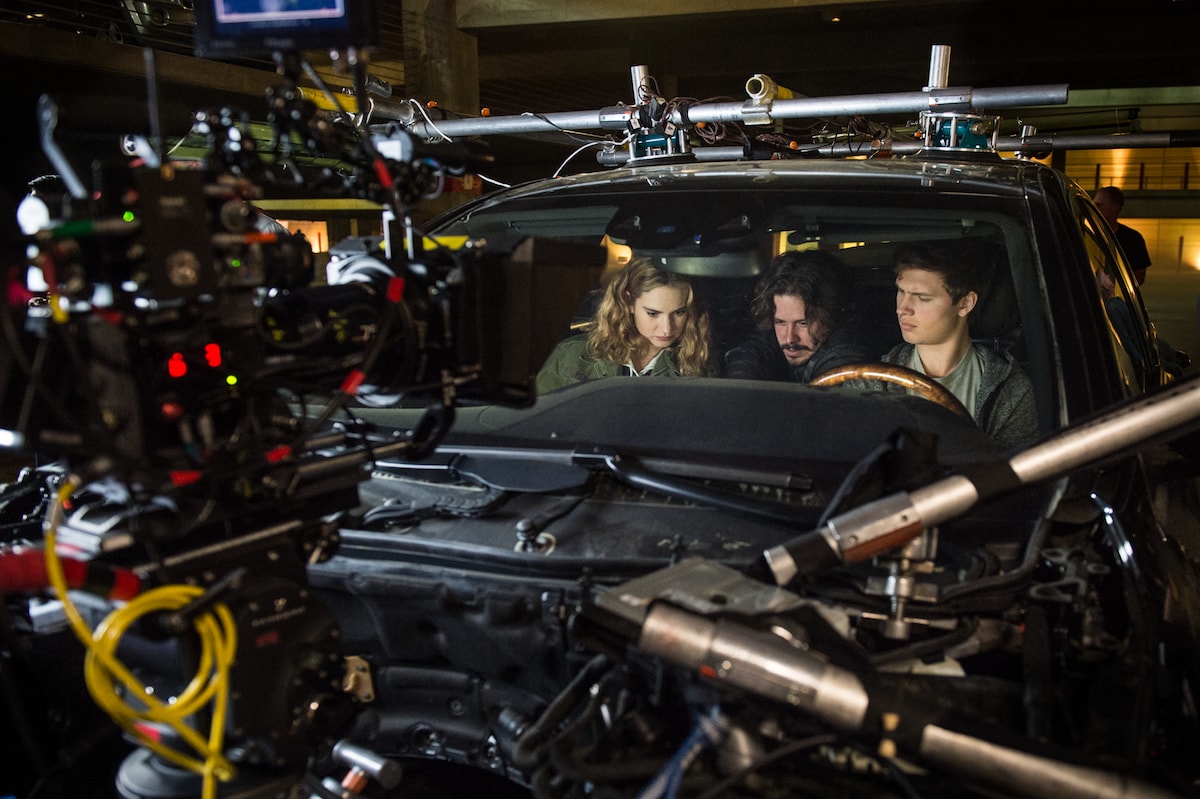 The chase scenes are heart-pumping and brilliantly staged, but they also help tell the story, each one getting more intense and more lethal, and each one moving Baby closer to accepting responsibility for his part in the robberies. “If his parents died when he was seven and he went to foster care, I think he disappeared into his own myth a little bit. Even the way that he’s still using the name Baby instead of his real name, disappearing into this nom de plume, is a way of trying to compartmentalize what’s happened to him in the past. The tapes that he makes of all the found sounds are his attempt to mythologize his own existence committing crimes. This is the element of it being sort of like a fantasy life. At the start of the movie his character is fooling himself that he is not a criminal. He definitely doesn’t identify with the rest of the gang. But the movie is telling you that you can’t be in crime without being a criminal.”

What Baby listens to means everything to him. But another character does not hear at all.  Baby’s foster father Joseph, is deaf, played by deaf actor CJ Jones. Joseph is the only person Baby talks to easily, and they communicate in sign language. “I really found directing the scenes inspiring and emotional,” Wright said. “It’s amazing working with CJ Jones. When somebody is reading your lips you are aware that you are not being as succinct as you can be. And so it made me much more direct. It was incredible working with him.”

Wright said he wants the film to be “entertaining for a general audience and maybe one person who feels spoken to” and is open to writing a sequel. He added special touches for those who look deeply, like a number on a shirt that is the release date of another movie about a man who drives a getaway car, “The Driver,” written and directed by Walter Hill.

“Baby Driver” is a departure in one way from his previous films. “Even though the other films were comedies, they were always intensely personal, about issues I was facing, growing up, romance, leaving home. But with this film, even though it is stylized, it is more grounded, with real consequences. It’s not like playing a video game where you can just start again. I wanted it to be more gritty and shocking.  It was very important to share the real life repercussions of your actions. I literally told the studio that I didn’t want to make another movie in inverted commas [quotation marks].”