“Suburbicon,” the new movie directed by George Clooney, is, as many of you who follow the inner workings of American cinema already know, based on an old script by Joel and Ethan Coen. The movie has an executive producer credit for Joel Silver, which leads me to infer that the tale of depraved murder in a Levittown-style suburb in the late ‘50s dates back to the early ‘90s, when the Coens made “The Hudsucker Proxy” with the then-blockbuster producer.

Even before the movie premiered here at the Venice Film Festival, bloggers and columnists were already drawing correspondences between Gardner Lodge, the character played by Matt Damon here, and Jerry Lundegaard, the in-way-over-his-head car salesman from “Fargo,” which the Coens made in 1996. The finished movie has other resonances from subsequent Coen pictures, including a secret-in-the-basement scene that gave me a little frisson from “Burn After Reading,” which actually starred Clooney.

But the movie Clooney made is more than a twisted Coenesque experience. The director himself and his frequent filmmaking partner Grant Heslov took their own swing at the script. It’s pretty clear that the addition of a secondary plot, in which an African-American family moves into the all-white Suburbicon and is harassed within inches of its life—a story that does, shamefully, have its roots in an actual historical one, which took place in a Pennsylvania Levittown (the movie actually retains the real name of the family)—is Heslov and Clooney’s contribution, as the Coens really don’t do social consciousness.

Does the narrative grafting work? Not so much. While Clooney is too deft a filmmaker to ever go Full Stanley Kramer, the toggling between Depraved White Rot (Damon’s Lodge and his sister-in-law Maggie, played by Julianne Moore, have concocted a murder scheme staggering in its crassness) and the dignity of the black family being subjected to all manner of torment often feels rather arbitrary. There’s a third movie in this smorgasbord, too, let’s call it “The Boy Who Knew Too Much.” Lodge’s son Nicky, played very well by Noah Jupe, is on to his dad and his aunt’s treachery. Just how far will this sick couple (Maggie has her hair dyed in the aftermath of her sister’s murder, turning her into quite the Hitchcock blonde) go to pull off their scheme, which also includes insurance fraud?

There’s a lot of entertainment value in the movie’s bits, because Clooney is not only an excellent director of actors, he’s got a great eye for shots and a good head for individual scenes. The movie gets a jolt of hilarious energy when Oscar Isaac shows up as a fast-talking insurance investigator. And Damon is scarily compelling, as the movie reveals him to be not any sort of hero, or even anti-hero but a something wholly other.

However, Clooney’s great eye for shots often gets ahead of his editing sense. There’s a scene in which two small time, lethal crooks, played by the ever-menacing fish-lipped Glenn Fleshler and a fake-pompadoured Michael D. Cohen, show up at Lodge’s office to deliver an ultimatum. When they’re done with that, they stroll past rows of desk towards the exits, swaggering so ludicrously that they’re practically daring any of the pencil-pushers to call a cop or a doorman or what have you. I know Hitchcock was not a fan of sticklers for plausibility but he also wasn’t one to throw recognizably human behavior out the window for a quick laugh in an admittedly good-looking shot. 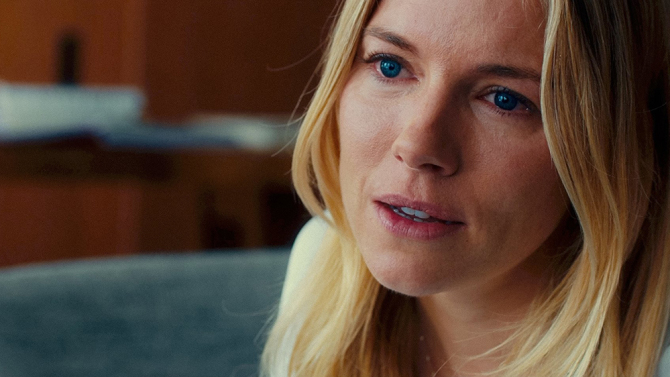 With writer-director James Toback, you never know quite what you’re going to get, quality wise. What you do know you’re going to get is something very indicative of the personality of James Toback—defiant, searching, self-indulgent, absurdist, plain absurd, and more. Now 73, Toback is as apt to make a movie about how guys like him can’t get a movie made as anything else—that was the subject of his last feature, the 2013 “Seduced and Abandoned.” His new picture is “The Private Life of a Modern Woman,” and it opens with booming classical music (the composers are Brahms, Bach, and Shostakovich) and shifting split-screens, which show Sienna Miller undulating in bed as if suffering a nightmare. We are privy to the nightmare, in which a wool-capped man confronts her in her spectacular apartment (her character is a film actress) and pulls a gun on her. She adopts a pose of seduction, wrests the gun from him, and shoots him. Is it accidentally or inadvertently or neither? This is what her character, Vera, tries to puzzle out over the next day. Because it wasn’t a dream: she really did kill the guy, and put him in a trunk. In my opinion, he was asking for it, but that’s possibly neither here nor there.

Vera’s struggle is interrupted by a visit from her new boyfriend, a rather milder fellow than her victim, a grad student named Leon, played by John Buffalo Mailer. He has finished his thesis, on murder in Dickens and Dostoevsky. After he leaves, a filmmaker of Vera’s acquaintance, Franklin, played by Toback himself, turns up and conducts a psychological interrogation of Vera. “Maybe you have a whole lurid existence on the side,” he speculates. He also asks her if she thinks much about death, and talks about the rage at the core of his own being. And speaking of Dostoevsky, a police detective in the mode of both Porfiry in “Crime and Punishment” and his screen successor Lieutenant Columbo turns up, in the form of Alec Baldwin.

There’s a good deal in this movie that’s awkward, but I was also impressed by the earnestness of its various inquiries, and the latitude given to Miller, whose character seems more her own active creation than Toback’s. I also liked the digital-cinema-meets-Nouvelle-Vague visual stylings of the movie. And the whole enterprise could be said to be justified by Charles Grodin’s scene as Vera’s grandfather, who’s suffering from dementia. At a strained dinner with Vera and her mother (played with great openness by Colleen Camp), he asks, “who owns this restaurant?” It’s Vera’s own apartment. The verbal merry-go-round continues in an exasperating way until Grodin’s character explodes: “I don’t like what’s happening to me.” It’s a confrontation with disease and mortality that’s devastating in its plain dread-filled simplicity. Of course, it wouldn’t be a Toback movie without a completely off-the-wall cameo, and the one he got for this is a doozy. After which the movie ends on a statement of pure old-school existentialism for Miller’s character. I admit that I fell for it.