It would be terribly unfair to refer to “Voyage Of Time,” which screened on Tuesday evening at the Venice Film Festival, as “Terrence and Cate’s Bogus Journey.” For one thing, the movie, a long-gestating metaphysical documentary by director Terrence Malick with narration read by Cate Blanchett, has lost the “Journey of Life” subtitle it has in the festival catalog. And for another thing, while I don’t consider the film a success, it’s conscientious, sincere and thoughtful enough to not deserve the sobriquet “bogus.” Still. I thought the joke might have been catchy.

This is a movie that has long been reputed to have two versions, but recent reports tell us that the 40-minute IMAX iteration of the picture, narrated by Brad Pitt, will only play at theme parks, sites where film critics are legally enjoined from entering. So we wretched scribes have to content ourselves with the 90-minute version. I presume the theme park cut of the picture will have Mr. Pitt telling the audience exactly what it’s seeing. Much of the imagery here is mysterious, obscure, and unexplained by the narration. Some recognizable planets, but also things that look like suns exploding or even atoms splitting alternate with images more familiar, such as volcanoes spouting.

The Blanchett-narrated film obliges the viewer to just go with it. And for a while, go it does. The first word spoken is “Mother.” By which Blanchett means the mother of us all, whether you interpret that as nature, or God, or a kind of energy no word could describe or articulate. “You walked with me then. In the silence before there was a world.” The images mean to evoke that silence, and then the stirrings of life, the tumultuous birth of the earth, and the shifts in the cosmos that led to our third-stone-from-the-sun status. Malick alternates this beautiful footage with video images in the old 4:3 TV ratio, starting out with shots of street people, homeless, without money or hope or their faculties. Later the video portions will show marriages of different faiths and cultures, a sacrificial rite involving bull slaughter, and more. As the life activity of earth begins to roil, the imagery grows stranger. Giant centipedes writhe on a beach. The eye of a Gila monster looks like one of the exploding suns we saw earlier. The imagery is maybe too pretty—we see a lot of elephants, but never any elephant dung—but it’s also more than “breathtaking.” It coincides with the narration. When Blanchett talks about everything on earth “ascending” into the Mother, the shots rhyme with that, and not in entirely obvious ways. This is a thought-out work, not a lot of touchy-feely stuff thrown together.

But when mankind first finds his way into the widescreen footage, things start to go overtly awry. Depicting the discovery of tools and fire by indigenous people, Malick is demonstrably coy about depicting his actors in a full state of nature—I guess he wanted to get a family-friendly rating. I am not complaining about the lack of nudity as such, but the effort shows, and that took me out of the picture. And there’s also the fact that “2001: A Space Odyssey” did it better, just as Godfrey Reggio’s film’s do modern cityscapes (which come up later in Malick’s chronology) better. It was a frustrating experience for me; in spite of having severely disliked Malick's previous “Knight of Cups” I had high hopes for this. Maybe some time I’ll try to sneak into a theme park to see the IMAX. 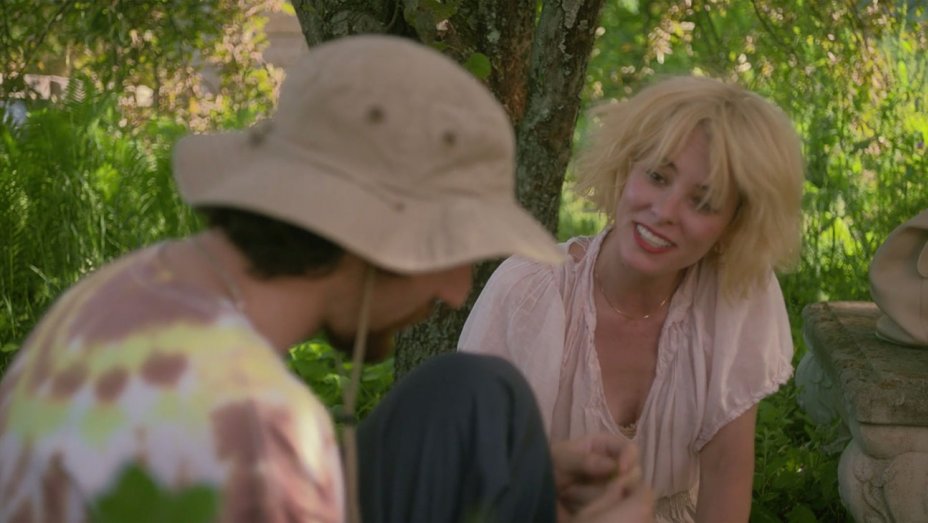 Laurie Simmons’ “My Art” is a highly flawed picture that has enough particular moments that it can qualify as a “Sort Of” movie. That is, it’s sort of funny, sort of charming, and sort of insightful. But it’s also consistently stilted—the respected artist Simmons penned the screenplay, plays the lead role, and directed, and she probably ought to have left that last task to someone with more vigor in that area.

Simmons plays a New York City artist named Ellie who’s also an academic; as the film begins she’s ending the semester and headed upstate to work at the home and studio of a presumably well-off friend and colleague who’s … somewhere else. The movie’s opening scene attempts to give a thumbnail sketch of an art insider’s world. Ellie, visiting the new Whitney, runs into a former student, Maude, now a super-successful artist. (She’s played by Lena Dunham, Simmons’ daughter.) Maude complains that she’s got two installations so close together she has to stay in Europe ALL SUMMER, as if this is the worst thing that could happen to a person. It’s all very wry, and conveyed amiably enough to not actively court viewer resentment. In fact, Ellie is a fairly agreeable character even when she’s being standoffish. But Simmons is a stiff actor too much of the time. She gets good support from the likes of Blair Brown, Barbara Sukowa (always good to see her in a movie—and better still to hear her sing, which she does here), Robert Clohessy and John Rothman. Joshua Safdie and Parker Posey play a very eccentric husband and wife.

The movie’s main value for me was opening up the way some other people see films. Ellie’s art project has her reenacting scenes from Hollywood. “We can never be them,” she tells the handyman who’s agreed to play Gable to her Monroe in a “Misfits” pastiche, “But we still have to try.” I myself have never projected my self onto a movie character; for me, films are not about seeing a version of myself on the screen. But rather allowing myself to be hooked into the emotions felt by particular characters. For Ellie’s project, it’s all about BEING the star—“everybody’s in showbiz,” as the song says. This insight didn’t cure all the movie’s ills, but it provided me with added value.