So. Mel Gibson. Its suspiciously nose-thumbing defenestration scene and arguably on-the-nose cinematic rhapsodies of masochism notwithstanding, I thought “Braveheart” was a pretty impressive directorial effort on Gibson’s part. Watching some of the battle scenes, I thought, “Hey, this guy’s done his homework—it’s clear he’s watched a lot of Kurosawa, and learned from it.” And I thought a lot of other noobish film critic type things, too. That was in 1995, when I was younger, more naïve, more full of hope. One thing I hoped for was that Gibson would direct something like a proper follow-up to “Braveheart.” But he didn’t. No.

Rather, he directed the very, um, vivid “The Passion of the Christ,” which betrayed no Kurosawa influence that I could detect; that was in 2004, a very good year to be Mel Gibson, largely because of that film’s box office success and cultural ubiquity. 2006’s “Apocalypto” was a movie that only a man with an incredible and unexpected box office success such as "The Passion of the Christ” could have gotten made: a shudderingly violent epic of the end of Mayan civilization with all the dialogue in the Yucatec Maya language. To tell you the truth, that movie didn’t work out too well with me either. All those beheadings—I got a lot more grindhouse than Kurosawa out of that one. And 2006 turned out to be a bad year to be Mel Gibson, as his DUI arrest and separation from his then-wife were just the first in a series of events and actions by Gibson that would seriously tarnish his reputation within the film industry and particularly the media that cover it. I just saw a piece that refers to Gibson’s coming to Venice with his latest directorial effort, the World War II drama “Hacksaw Ridge,” as part of Gibson’s “Forgiveness Tour.”

Well I’m not gonna get into that. I’m a serious critic, and I’m going to review the work, not the man. Also, I hear Gibson is staying at my hotel. Good grief. I’ve already shared a water taxi on this trip with one director whose film I’ve trashed, and I’m not about to push my luck. 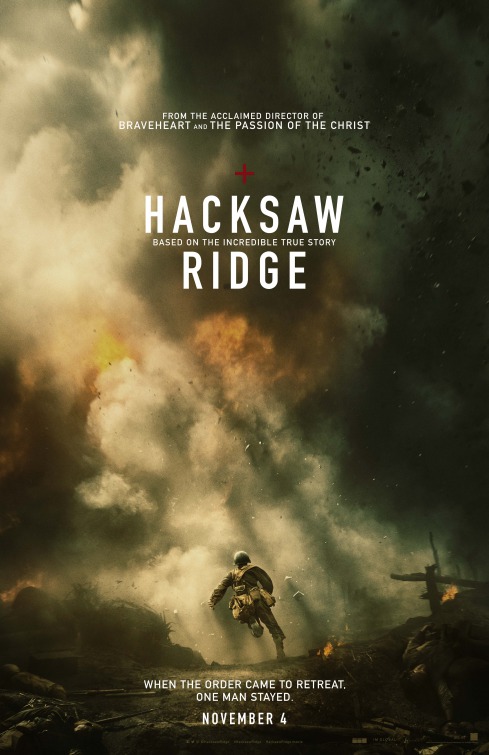 But seriously: “Hacksaw Ridge” is a not-inconsiderable achievement for Gibson, a war film so stolid in is values—both aesthetic and the other kind—that it marks the actor/director as fully ready and able to take up the banner of Hollywood’s Last Classicist whenever Clint Eastwood decides to give it up. Based on the true story of one Desmond Doss, a young fellow from the Blue Ridge Mountains who enlisted in the army during World War II not to fight, but to be a medic, and furthermore held to his pacifist beliefs so strictly that he refused to carry or even touch a weapon, it tells an affecting tale with conviction. Conviction that carries it over and through its cornball touches, and there are many of those.

Andrew Garfield plays Desmond, seen early on as a boy rough-housing with his brother. A mishap when the fighting gets too rough puts the horror of violence into Desmond, as does a later incident involving his alcoholic WWI vet father (Hugo Weaving) that’s only revealed in flashback a good deal later on. The grown up Desmond is a goofily grinning good boy who falls hard for local nurse Dorothy (Teresa Palmer) after putting a tourniquet on an injured buddy and escorting him to the hospital, because that’s just the kind of guy this devout Seventh-day Adventist is. The courtship of Dorothy and Desmond sees Gibson evoking The Charm of The Widescreen American Pastorale with great élan. Of course it can’t last, as a newsreel full of Nazis reminds us, and so Desmond enlists, although he’s going to do basic training by his own rules. He’s read up on the “Manual of Practical Anatomy” enough that he knows he’ll make a good medic, and at first his platoon seems like an amiable enough lot. It is filled, in fact, with every multi-ethnic cliché from every bad World War II film ever. “I’m Grease Nolan, out of Red Hook,” one character actually says, with an accent that would raise Leo Gorcey from the grave just so he could die again. There’s a Polish guy, a guy with a Clark Gable mustache nicknamed Hollywood, and more and more. Then Vince Vaughn shows up as the drill sergeant and does something resembling a mild Don Rickles routine. This was entirely tolerable to me—there are times when quaint doesn’t bother me, and the movie maintains its solid visual construction throughout. One thing I appreciate about Gibson as a director is that he knows there are worse things you can do with a movie camera than put it on a tripod.

The funny stuff stops when Desmond refuses to pick up a rifle, and Vaughn and several of his higher-ups determine that he’s gotta go. So begins a kind of Stations of the Cross for Doss, wherein he faces the scorn and derision of his peers, and is eventually put up for court-martial. The way this matter is resolved is worth experiencing relatively cold, although anyone who’s seen the trailer of this film knows it was resolved in Doss’ favor: he was permitted to go into battle without a weapon.

And so, to Okinawa, and a place called “Hacksaw Ridge,” where the Japanese have been systematically and brutally wiping out every American battalion that goes up the cliff to try and take it. “If we take Okinawa, we can take Japan,” one soldier says optimistically. Gibson’s direction of the battle scenes is … well, intense. The carnage is relentless. Veterans of the Second World War have recollected talking to a soldier next to them figuring out what to do next in a battle to discover that the person they’d said one word to was a corpse before the second word was uttered. Gibson depicts this, and more, with a steadiness that’s deceptive. He gets across a “war is hell” message, over and over. But the movie’s battle scenes can still be oddly rousing, as when the troops rally after taking out a couple of sniper bunkers and actually manage to hold on to the field for an evening, not knowing that further swarms of Japanese soldiers are waiting in tunnels for the next morning. It’s after this next battle that Doss performs his most amazing act of valor, staying on the field after a retreat to get as many men down from the cliff side as he is able.

I gotta say, Doss’ story is a helluva thing, and Gibson tells it with a plain admiration. As an evocation of the horrors of a specific war, it doesn’t get as hardcore as Eugene Sledge’s amazing battle memoir “With The Old Breed At Peleliu and Okinawa,” but any movie that could convincingly portray the depredations described in that book might well drive any of its viewers mad.