From Denmark comes the dramatically ambitious “You Disappear,” which seeks to challenge its audience emotionally as much as it does intellectually. In a nifty balancing act of entertainment and information that works to the very end, “You Disappear” makes a drama around neuroscience, and the idea that a brain tumor could lead to actions by people that could be classified as insane. The question of this film is about a school principal named Frederik (Nikolaj Lie Kaas), who is in court for embezzling funds from the school, taking 12 million kroner. The case is complicated by his diagnosis three years ago of having had a brain tumor, which would have been in the timeframe of the crime. Could Frederik’s brain chemistry be blamed for the crime?

The film is just as much about the personal effects of the tumor, from the person who experiences it to the loved ones in the mix. Frederik’s wife Mia, (Trine Dyrholm), struggles to be supportive to her husband while he recovers from the tumor being operated on, and his actions unpredictable and sometimes violent. She finds some support in a man named Bernard (Michael Nyqvist) whose spouse also has experienced brain trauma. Bernard becomes Frederik’s attorney, which becomes more complicated by the relationship Mia develops with Bernard.

There is a special power to the drama of this film, in the way its narrative is constructed. The moments of sadness are not melodramatic but scientific, encouraging the audience to study how its characters are acting. Especially as the movie goes into the very difficult territory of watching a loved one go through such an experience, it becomes personal. And yet while the movie aches it does not prod; Fog boasts an impressively steady hand with its heavy, vital ambitions.

With its filmmaking, “You Disappear” makes this story work in various ways, despite its many polarizing choices: in-depth court-room scenes that play out as exposition, an intellectual focus on neuroscience that would play even better in a college class. Adapting co-writer/director Peter Shonau Fog uses effectively non-chronological storytelling by going back and forth and investing a lot of time in sharing information about injury. Through the story of Bernard and his wife, Mia provides voiceovers about the conditioning of the brain, about memory, about how we are biological systems and a mix of brain chemistry etc.

As with many parts of the movie, it makes the drama more serious, while providing more to think about it. Fog’s filmmaking doesn’t value one or the other, instead he knows that they can both work in getting people to care about a story. In turn, the story becomes incredibly human, and makes for exceptional drama. 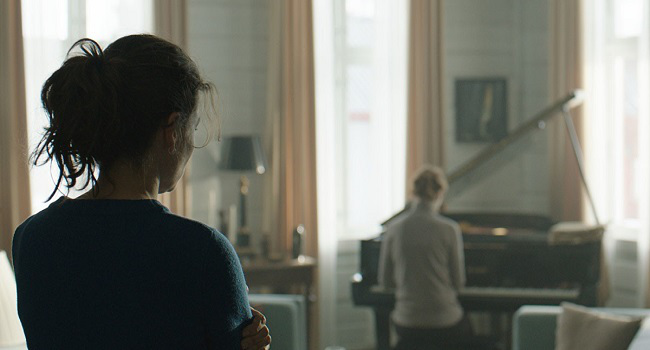 There’s a flavor of Ingmar Bergman’s “Autumn Sonata” in the small drama “Disappearance,” of which the title is a glaring theme but not its only hook. The story is familiar, with a young woman returning back to her home in order to come to terms with something in the past, while making an impact of their lives in the process. The way it is told is less familiar, especially with the delicate interests of director Boudewijn Koole.

Roos (Rifka Lodeizen) is dying, and there are numerous issues to be addressed from her past. She ventures back to see her estranged pianist mother Louise (Elsie de Brauw) in Norway, along with her younger brother Bengt (Marcus Hanssen), to eventually tell them the news. It does not go as smoothly as Roos might have planned it. The story with the mother proves to be the least interesting aspect, despite the weight that is put around it and the visible tension between them in its intriguing performances. Instead, “Disappearance” stands out for the relationship that she has with her younger brother, which offers an unflinching idea of bonding, including scenes in which she tries to impart some type of sexual knowledge onto him, with warm, innocent moments that lean on incest the way that Louis Malle’s “Murmur of the Heart” did.

Koole finds a lot of cinematic potential in the vast white snow landscape with just a couple people to stand out, or in the endless fences and trees of the farm estate. Similarly composed without fuss is the sound design, which solidifies the portrayal of Bengt’s unusual interest in listening to ice, but makes a viewer appreciate how it creates such a full landscape. Though it could use a more original structure, “Disappearance” makes a unique impression.