Many of the movies I watched yesterday were about the responsibilities we owe each other as members of society. "Pandora" (pictured above) the day's first film, is a big-budget Korean disaster movie about a nuclear power plant meltdown, and the brave mechanics and employees who save the country from a massive meltdown. Later in the day I saw "The Girl with All the Gifts," a British zombie thriller about a group of soldiers and scientists who try to survive an apocalyptic crisis while reluctantly protecting Melanie (Sennia Nanua), a young human/zombie hybrid whose blood contains vital antibodies that can be used to make a zombie cure. Even "Terror 5," an Argentinian portmanteau horror film, features a story about zombies who come back from the dead after the negligent politicians and slumlords responsible for their deaths (a building collapses, killing 15 people) are found "not guilty" in a court of law.

I don't want to be my brother's keeper, but I often fear that I'm doing him a disservice, if that makes any sense. Movies are fundamentally a form of escapism. If we identify with people or situations we see on-screen, it is necessarily through a form of abstraction. I thought about this as I watched "Your Name," a Japanese anime that was not screening at the festival, but here in theaters.

"Your Name," an endearing, and visually impressive body-swap fantasy, follows Tokyo urbanite Taki (Ryûnosuke Kamiki) and country-mouse islander Mitsuha (Mone Kamishiraishi) as they mysteriously trade lives and fall in love with each other. This scenario is fundamentally contrived, but it made me wonder what I want from movies. It doesn't have to be a means of communicating/identifying with others as a means of understanding myself. But let's say you were in a position to share someone else's life, as the characters in "Your Name" do. If you chose to engage with the situations and people you met while in another person's skin, would you necessarily fall in love with them, and therefore yourself? And if you did, isn't that a kind of benevolent narcissism? 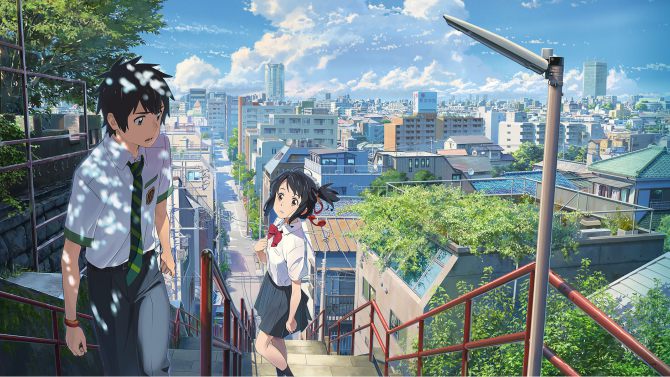 When I watch a movie, I normally just want to be shown something unique, something that challenges my preconceived notions, flatters my intelligence, sates my low-brow/basic taste, or maybe just feels like it expresses the artist's ideology in an appreciably cogent way. It's the same reason that I write: to have the freedom to express and realize what I'm feeling or thinking in a way that's more than just a therapeutic outlet. If my writing doesn't work for other people and/or doesn't affect them, then I've failed. "Your Name" worked for me, for the most part, since I thought it was exceptionally sensitive and charming despite having a premise that I normally find precious and annoying. Movies have to transport me, and I don't necessarily care where to. It's not necessarily the filmmakers' job to worry where I go, or how I get there. There are, after all, plenty of great maudlin and/or intellectually dishonest films. But getting me to not only share but accept an artist's vision makes my job as a critic that much harder: if a filmmaker's strategy works on Film X, but not Film Y, is my criticism of Film X invalid? Does consistency of perspective matter, or is that just a sign of inflexible/incurious thinking? Why watch movies? Why write? Film festivals like Macau don't just present cinema, they allow us to reconsider our roles as critics.

"Your Name" is not a great film, but its impact on me was great. It didn't provide me with any great epiphanies, but it did make me slow down long enough to wonder what I was doing and where I was for a moment. And just think: this movie—which hasn't even gotten released in New York City—is playing at a Macau casino multiplex. If you can find a way to see "Your Name," you should.