The bookie for the Palme d'Or 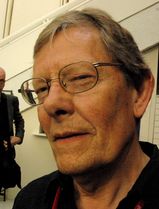 Austrian Michael Haneke's "The White Ribbon" is shot in black-and-white and set in an Austrian village in the two years leading up to the outbreak of World War I. A series of increasingly disturbing happenings over a period of months disrupts the otherwise uneventful flow of isolated rural life. These include a planned accident that nearly kills the village doctor, the torture of a child by unknown assailants, and the burning of a barn.

At first it could be assumed that this is a mystery and that Haneke's intention is to gradually reveal the perpetrators of the increasingly bizarre and cruel acts. Instead he seems to be moving into Dreyer territory, unfolding the story of repression and escalating evil in beautifully precise but rigid compositions that echo the sternness of the social mores and moral precepts of his characters.

Large families headed by unbending fathers are at the center of this film, and there are many children. The actions of certain children arouse suspicion, but then nearly everyone in the film arouses suspicion, as this is no ordinary mystery. In the end, the disturbing chronicle circles around to the beginning to find a meaning. The film's narrator began the story by saying that the events he was about to unfold may shed some light on later happenings. Haneke leaves it to his audience to decide what is meant by this, but it isn't too much of a stretch of the imagination to think that these are the youngsters who grew up to wear brown shirts and swastikas.

There has been little talk around the Palais of eventual award winners. I decide to consult the expert, Derek Malcolm, former film critic for the Guardian and the London Evening Standard. [Photo at top] A Cannes veteran, he invariably has the scoop on jury gossip, and is very often right in his predictions. He'd better be: A onetime jockey, he actually sidelines as a bookie here and takes bets on the awards. Malcolm suggests that, given the majority of women on the jury, the prizes will go to "films that ladies like." He speculates that Tarantino doesn't stand a chance, and that Jane Campion's tragic romance "Bright Star" could walk away with this year's Palme d'Or. We'll see on Sunday.

Ken Loach's "Looking for Eric" is the competition film that has so far received the most prolonged round of applause of any I've seen this festival. The plot depends on soccer lore and the legend of soccer star Eric Cantona for its impact, but that won't be a problem for anyone who doesn't follow soccer. I never heard of Catona, and I've never seen a soccer match, but I fell for this film as much as the rest of the audience appeared to. 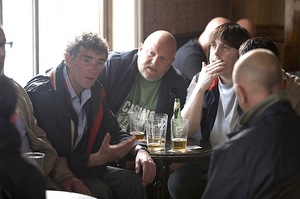 Eric and his mates love Eric.

The story of "Looking for Eric" centers on the mid-life crisis of British postal worker Eric Bishop, soccer fan and twice-married man who now lives with his two teenage stepsons. Eric is a popular guy among his work mates but a wuss at home, where the boys have run wild experimenting with drugs and falling in with dealers. The depression that saps his energy has much to do with guilt over the fact that he long ago walked away in cowardly fashion from his first wife and left her to raise their daughter, now a mother herself, alone. The soccer-related content is heavy in the first half-hour, and I was prepared to zone out, but Loach is too smart a filmmaker to let this become a niche film for sports fans.

Eric begins snooping into his son's stash and smoking a joint now and then to relieve his depression. While stoned, his ultimate hero Eric Catona appears to him and begins coaching him in a kind of assertiveness training. Catona is played by the real Eric Catona, who is surprisingly charismatic and funny. It wouldn't be fair to reveal more of the plot except to say that Eric Bishop puts Eric Cantona's coaching to good use and regains his manhood, his self-respect, and his family, with the help of a little team work . There's a very funny finale that involves some vigilante action with masks, clubs, and paintball guns, and it's worth waiting for.

Pedro Almodovar, winner of an Oscar for "All About My Mother" and of Best Screenplay at Cannes for "Volver" is quite a favorite here, and much is expected of any film that he premieres. "Broken Embraces" has more subplots than a soap opera, and is a nonstop showcase for his favorite actress Penelope Cruz, playing Lena, a beautiful young woman who initially becomes her wealthy boss's mistress in order to pay for her father's health care. To her peril, she then betrays him with the film director with whom she falls in love. 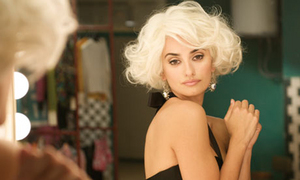 Penelope Cruz in the Marilyn wig

This has to be a dream role for any actress, especially working for a director like Almodovar, who gives his actresses free reign to be gorgeous and saucy. Lena's real ambition is to become a movie actress, and Almodovar uses this plot angle as the excuse to dress up Cruz in the looks of many movie icons. One minute she's Marilyn, Loren the next. In the film within the film she's an Audrey Hepburn look-alike. Cruz has the confidence and verve to pull it off with admirable style.

I'd definitely watch "Broken Embraces" again, but I don't consider it to be in the same class as "All About My Mother" or "Volver." A romantic comedy/melodrama needs to have a convincing romance at its heart, and this one falls short. The central problem to me is that there's more chemistry between Lena and her suave elderly patron than between Cruz and Lluis Homar, the actor who plays the lover for whom Lena risks everything.

French director Denis Dercourt had an international success with his 2006 film "The Page Turner". He's back at Cannes this year with "Tomorrow at Dawn" in the "A Certain Regard" section of the festival. A piano also figures in the plot of this new film, but this time in a supporting role. Dercourt earned his living as a classical musician earlier in his career, and the world of music conspicuously intersects with his stories.

In "Tomorrow at Dawn", Mathieu (played by Vincent Perez) is a classical pianist of considerable fame, who has just suffered a crisis of confidence in his career. He's canceled concert tours and recording sessions and decided to live apart from his wife and child for a time. Coincidentally, his younger brother Paul has also recently suffered a breakdown, and is in a fragile state from caring for their mother, who is undergoing chemotherapy. Mathieu moves in with Paul and their mother, hoping for some quiet time to work on his music and rethink his career. Instead he becomes drawn into his brother's serious avocation of historical re-enacting. 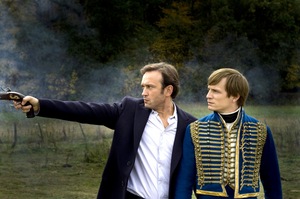 More than a history buff

Paul is more than a history buff, he's a history fanatic whose cherished hobby is playing at being an officer in Napoleon's army with other like-minded re-enactors. The crisis this story leads up to is pure nonsense, but it's a very enjoyable ride. In effect, we get two movies in one as Dercourt creates the re-enacting sequences with detailed authenticity and the film goes back and forth between the two worlds. Mathieu discovers that signing up for the Hussars is a kind of lifetime commitment that has dangerous consequences in the real world when he is challenged to a duel.

The candy jars have disappeared from most of the counters at the film market stands, and the cartons and bubble wrap are making an appearance today. The market ends tomorrow, and these thousands of film buyers and sellers will be going home. I make one last score of a worthwhile promotional item when I spot a punchbowl full of 512 MB flash drives at the Canadian stand. This freebie is a masterpiece of rustic kitsch: polished blonde wood emblazoned with a maple leaf and hanging from a faux leather thong.

Breaking the ice with John Keats": "Are you sleeping in my bed?"