Editor's note: Sasha Kohan is one of three recipients of the Sundance Institute's Roger Ebert Fellowship for Film Criticism for 2017.

“I don’t know what year it is, but it’s not 2014," says a man in the driver’s seat, as a camera and an audience are led on a nighttime tour around Ferguson, Missouri. These words and the sentiment behind them are among the simplest, most striking, and universally applicable to three of Sundance 2017’s most important documentary offerings, all on the current state of police tension and race in America.

Director Peter Nicks' “The Force” is a study of the Oakland Police Department, beginning in 2014 soon after Officer Sean Whent was hired as the city’s Police Chief in order to implement major reforms within the department and ending with Whent’s forced resignation following the discovery of the department sex scandal in June 2016; the film is also the second in a planned trilogy by director Peter Nicks exploring connections between certain institutions and the communities they are intended to serve. “Time: The Kalief Browder Story” is a six-part docuseries from Jenner Furst, with production help from the Weinstein Company and Jay-Z, recounting the horrific and entirely unjustified experiences of the 16-year-old New York City kid who was wrongly arrested in 2010 and imprisoned for three years, eventually committing suicide by the age of 22. Finally, “Whose Streets?” the source of the opening quote, is the jaw-dropping, feature-length directorial debut from Sabaah Folayan and Damon Davis, and a film which will surely be remembered as one of the most important from this year’s festival. “Whose Streets?” begins with the shooting of 18-year-old Mike Brown by then-28-year-old Darren Wilson, and spends the rest of its time fully immersed within the city of Ferguson, where consequent protests became crucial in the rise of the Black Lives Matter movement.

If there’s one clear statement to be made from observing these works as a whole, it’s undoubtedly to do with America’s systemic reluctance to move forward in time. Each of these documentaries focus on the last decade, with particular emphasis on the last two or three years, and each reveal alarming new angles of America’s institutionalized arrested development. However, I recognize that I am one of many who are only beginning to comprehend the gravity of an America I do not experience, and the content of these pieces may be frustratingly familiar to those who have lived there for generations and deal with the obscene injustices depicted on a daily basis. I would like to believe that if every white person in the country saw these three documentary pieces, then something would have to change, but the reality is a painful truth that each piece reiterates at some point over the course of its narrative: “A system cannot fail those it was never meant to protect.” The systems in question are prisons and the police force, and the question is a resounding how is this allowed to happen?

Of the three, “Time” offers the most uncomfortably clear answers, and is the hardest to watch. While all three documentaries explore equally difficult subject matter, there is none of the thrill, pride, or love behind scenes of united resistance as there is in the fabric of “Whose Streets?,” nor is there even the intention of making changes for the better that drives the story behind “The Force.” Only two episodes of the docuseries were screened at Sundance, so there is a chance that the remaining four will leave you with a slightly less sick feeling in your stomach. But I wouldn’t count on it.

The problems with Browder’s case are clear from the outset—we see him arrested on false charges of stealing a backpack, with an obscenely high bail of $3,000 that his family could not pay, and we are shown at least four different police records, which all state different dates of arrest. The inconsistency alone is absurd enough to border on comical, except what it reveals is less the ineptitude of the police force than the complete and total carelessness with which a young human life was handled. Because Browder could not make bail and was in violation of probation for an earlier case, he was sent, at 16, to Rikers Island—New York City’s main jail complex, a facility which has been described as “the worst place on earth,” somewhere you only leave if you plead guilty. The horror and corruption of the prison complex is a subject worthy of its own anthology series, but “Time” gets the message across with just a few details of Browder’s experience, namely: the extortion scheme of what’s known as “The Program”; the encouraged gang violence and gang behavior on the part of the officers; and the extreme psychological consequences of solitary confinement, which one inmate described as “like dying with your eyes open.” Browder’s two years in solitary confinement of his three spent on Rikers Island—again, because of false charges of stealing a backpack and an inability to pay $3,000 bail—are cited as the primary reason for his suicide at 22. 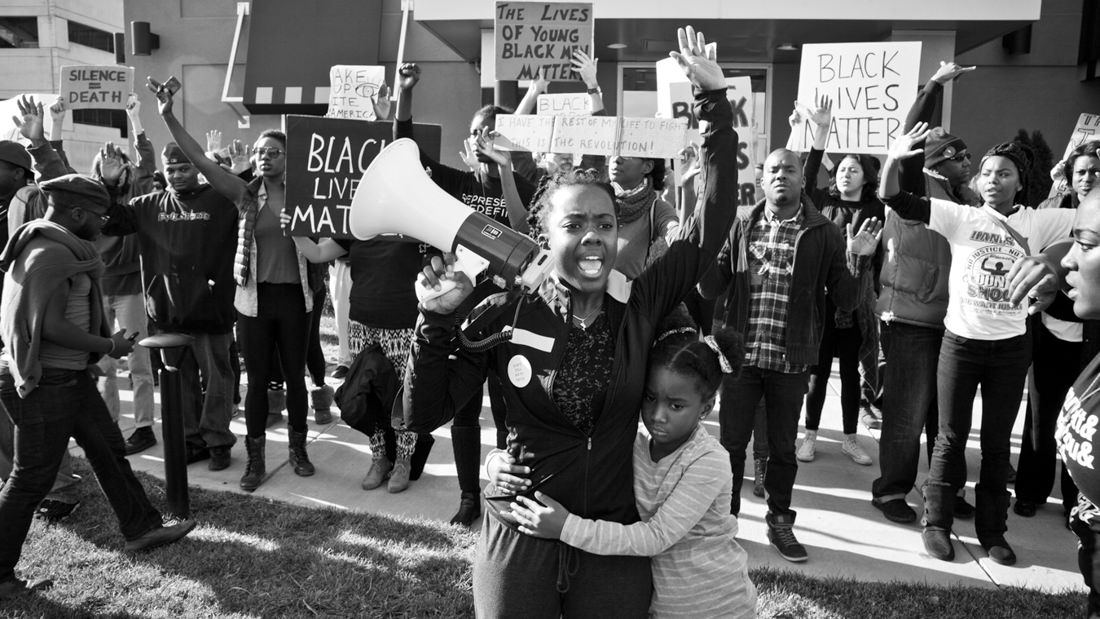 “Whose Streets?” tackles the extreme military tactics used by police from a civilian perspective, specifically in the aftermath of Mike Brown’s murder, while “The Force” offers an equally nuanced but less emotionally successful look at the police from the view of an insider with passionate intentions of reform. Both make significant use of YouTube footage, pointing to the rise of civilian journalism, but “Whose Streets?” takes the idea a massive step further. The smooth and glossy film work that mostly makes up “The Force” doesn’t come close to achieving the gritty, revolutionary feel of “Whose Streets?” with its unabashed use of even the most blurry, pixelated iPhone footage interspersed with tweets from users witnessing the Ferguson violence first-hand. Both documentaries address the importance of this increase in citizen film footage: one of the main subjects of “Whose Streets?” shows us the ‘Cop Watch’ stickers he’s produced for himself and his neighbors to put on their phones and camcorders (“I go out with my camera. That’s my weapon”). On the other hand, in one of the first scenes showing Officer Whent with his new students, he pulls out his own phone and holds it in front of him, asking the class, “What do you think when you see this?”

The predominantly white audiences at these movies were also interesting to watch. As with other documentaries, like “Nobody Speak” and “An Inconvenient Sequel” where there was a general groaning anytime Trump was mentioned, the crowds at “Whose Streets?” and “The Force” had strong vocal reactions to much of what was shown. They laughed darkly with one establishing shot of a residential home from “Whose Streets?” where a welcome mat met visitors with the greeting “COME BACK WITH A WARRANT,” and again when a TV interviewer asked Darren Wilson point-blank if he was racist and Wilson responded with, “You can’t perform the duties of a police officer with racism in you.” They gasped in comic disbelief and winced when read the police account of one woman’s arrest, which we had just watched at the scene of an organized protest—“The female was screaming but it seemed more like tribal chanting than words”—and again in “The Force” when, during group discussions within the class of whether officers responded appropriately in videos shown, a black female officer can’t get a word in with her group of white male peers.

The audience here is important, because there are some times when your viewing experience actually contributes to your overall impression of a movie. “Whose Streets?” was one of those experiences for me. I got to the theater early and took a seat near the center at about an eye-level range—objectively, a good seat—and in the 30 minutes or so leading up the film’s start time, observed a series of exchanges between audience members over the four seats to my left. A teenage white girl sat next to the aisle with one coat sprawled over the three empty seats, telling one group of twos or threes after another that she was saving them for her friends. Defending three prime empty seats at any crowded event is a pretty bold and uncomfortable position, one that I can relate to and was mentally prepared to throw my own coat over a seat for if need be, but she stuck to it until the screening was about 15 minutes away, when an older black couple approached her and asked about the seats. Clearly worn down and embarrassed that her friends hadn’t yet arrived, the girl caved and said that she had been trying to save them, but they could take them if they wanted. The couple moved into the aisle as she took her coat and left but did not sit down, watching the girl walk towards the screen and connect with her late incoming friends, talking inaudibly to each other until the woman went down to follow the girl, while the man took the seat she had given up.

Less than a minute later, an older white woman came to the aisle and asked if the seats were his. Yes, he said. “Well, I don’t see any coats or anything,” the woman countered, crossing over the man and moving into the aisle, as he continued to try to explain that the seats weren’t for him, but for someone else. “Look, if there are three empty seats and no one’s here or got coats on them or anything, I’m taking them,” the woman asserted with finality. “And I’m trying to tell you,” the man said with unbelievable patience, “I’m saving them for a girl who was here before and her friends—right down there,” and pointed to a group of four white teens and the woman he’d arrived with, all waving and smiling and making their way up to our aisle. The woman rolled her eyes and left, the four kids thanked the man for saving them seats, and the couple went down to find two spots together closer to the screen.

Maybe the older white woman would have behaved just as rudely if it was still the young girl trying to save the seats when she came in, and maybe the problem of saving multiple seats in a packed theater is just an everyday situation bound to be met with increasing tension as the time of an event ticks closer and closer—but this one small incident of witnessing a white person thoughtlessly attempt to intrude in a black person’s space—even after he had answered in the affirmative to her own question of whether or not it was, in fact, his space—felt particularly disconcerting in light of the film we were all there to see. And what had my role been? If there’s one thing I’ve learned as a citizen of the United States viewing movies like these and others, it’s that resistance must become our fundamental mode. “Resistance is a way of being in the world to say, ‘I’m not going to allow things that I know are wrong to unfold smoothly,’” Sabaah Folayan told audiences after the screening of “Whose Streets?” differentiating between what it means to ‘protest’ and what it means to ‘resist.’ Folayan went to decry the efforts of the federal government on this front, and encourage all of us to become as active as we can, even in the smallest ways: “Our local governments are really our last line of defense that we have to stay safe in our homes, safe in our streets, safe in our communities,” she concluded, “and I hope that you all take that challenge and engage with the people who are right next to you in your world.”