Sundance 2015 Interview: The Cast and Producers of “Knock Knock”

In co-writer/director Eli Roth’s hormone horror story “Knock Knock,” Keanu Reeves plays Evan, a loving father and husband who’s given an offer he should have refused. When alone at his house for the weekend, two young women appear at his door, Genesis (Lorenza Izzo) and Bel (Ana de Armas). They are lost and rain-soaked but eager to party, even with a former DJ/modern-day dork like Evan. His attempts to be hospitable while respecting his vows are continuously defeated, as the duo’s flirtatious joie de vivre only gets more aggressive. When Evan finally embraces the Sirens’ temptation, he is soon haunted by their permanent presence, with passing-by family friends played by Aaron Burns and Colleen Camp caught in the middle. Waging unpredictable anarchy this side of Michael Haneke’s “Funny Games,” Genesis and Bel set out to destroy Evan’s house, his relationships and Evan himself.

“Knock Knock” is the latest project from “Chilewood,” a title for the filmmaking family started by Roth and Chilean writer/director Nicolás López, along with their frequent co-writer Guillermo Amoedo. Roth’s first film to be shown at Sundance, “Knock Knock” was bought during the festival by Lionsgate for distribution to the price of $2.5 million.

The morning after “Knock Knock’s” world premiere, RogerEbert.com talked with López, Burns, de Armas, Izzo and Reeves to discuss the horror-comedy, the appeal that its wacky narrative had for its actors, and the movie’s warning about free pizza. 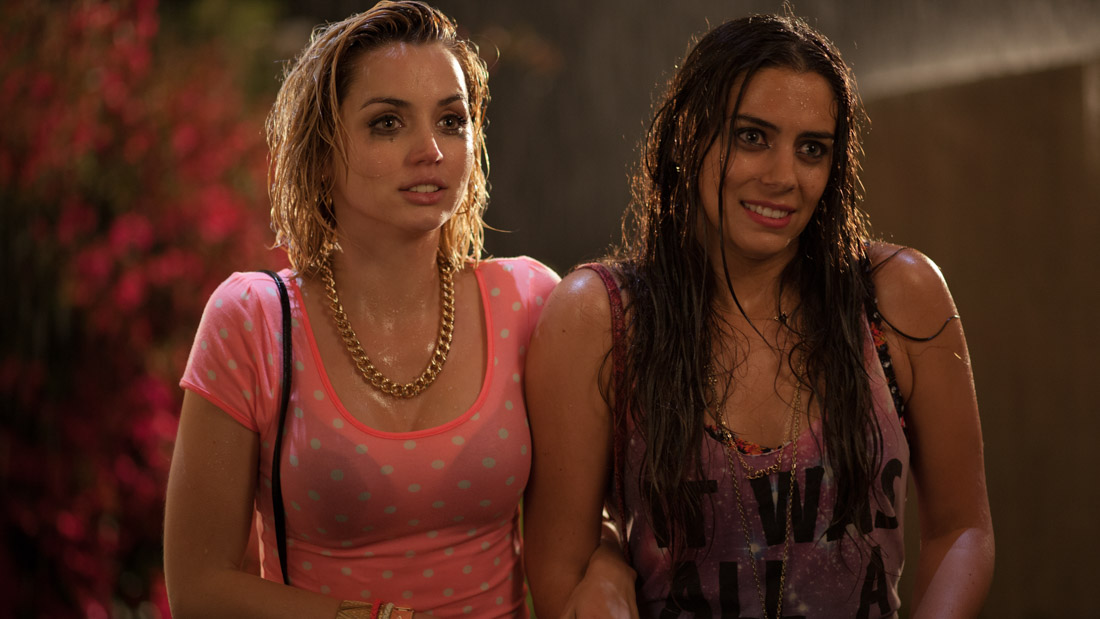 “Knock Knock” is distinctly set in Hollywood, but was shot entirely in Santiago, Chile. “Our goal is to make one or two movies per year,” says Lopez. “Non-stop, and in Spanish. The first movie we did was ‘Aftershock,’ which I directed. Then we did ‘The Green Inferno,’ which Eli directed. And then Amoedo directed ‘The Stranger’ which will premiere at this year’s Fantastic Fest. But while we were waiting to figure out what was happening with [the still-unreleased] ‘Green Inferno,’ we wanted to make a movie right away.”

And thus, “Knock Knock” was born, after the three co-writers viewed 1977’s “Death Game,” which Roth stated himself during the previous night’s Q&A to be a huge influence. “We were like, ‘the premise of this movie is so clean,’ López confirmed. “‘That’s the kind of movie we should make.’”

“Knock Knock” challenges the expectation of seeing Reeves with the heroic upper-hand, and instead has him playing the role he himself called “the sacrificial lamb.” When introducing the film, Roth stated that this film was a turning point in his own career and that of Reeves’, comparing the latter to how Clint Eastwood fully harnessed his image to become an even stronger on-camera presence. Lobbing that comparison back to Reeves in an interview, the film’s challenge of expectations for Reeves doesn’t seem intentional to the actor.

“Well, Eastwood never did 'Bill & Ted’s Excellent Adventure' or a 'A Scanner Darkly,'” answered Reeves. “I don’t really play with my image. But I was sent the script by [producer] Cassian Elwes, and I responded to the material; the idea of playing this guy who goes through this journey, who is really guilty and innocent, but mostly guilty, and gets punished. And, in a way, he kind of grows up. But that’s just one aspect of it. I enjoyed the script because it was funny, and I liked the suspense that Eli was playing with. I’ve always wanted to work in a different genre, and I love when films can entertain but have ideas in them.”

López and Burns remarked that this role is a distinctly different one for Reeves, namely that the action star plays an ordinary, boring dad. “It was the first time that Keanu’s played a character who has kids,” López stated. “So when we gave him a gun it was no big deal to him, but when we told him to interact with a kid, he was like, ‘Oh, how do I do that?’ And seeing him nervous, freaking about these two girls, was awesome. He wasn’t being the cool guy, but a normal guy. We even had to dial down his cool and tell him, ‘Keanu, this is how a normal guy interacts with two hot girls!’”

Roth isn’t the first director that one would associate with Reeves, especially as Reeves’ filmography seems to favor horror the least of other genres. But, the actor says that he dug Roth’s movie-lover perspective: “I always think of him as a cinephile—his training, his background. Whenever I’ve seen him speak, or whenever I see his films there’s a lot of referencing in dialogue between the audience and the movie, there’s a conversation happening.” 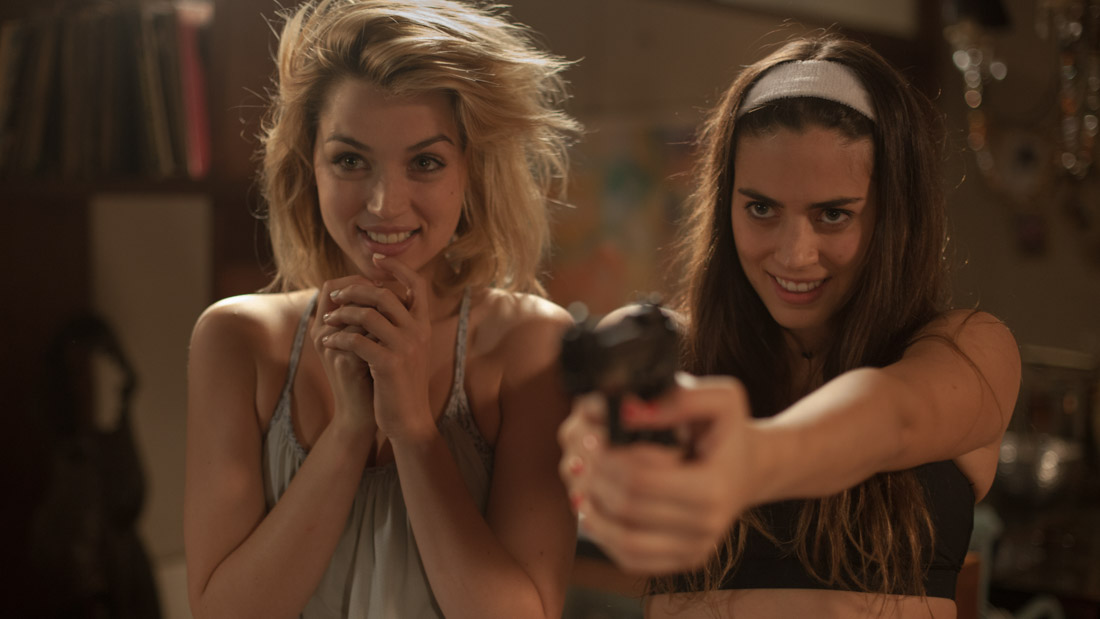 Opposite Reeves in “Knock Knock” are the two femme fatales played by de Armas and Izzo. Their characters are playful and fickle, and with extreme over-sexualization. What excited these two actresses about playing these characters?

“It was so refreshing to see a script where there were female leads,” said Izzo. I know the story is about [Evan], but it’s also great to find a script where the powerful emotions and roles are played by women, where women can take over and show vulnerability, love, and insecurities in such a palpable way.” De Armas added, “I loved the tone, and the comedy…it was very funny and very sad, that these girls are looking for someone who says, ‘No, I’m not going to fuck you.’ And they can’t. That’s why they keep looking; they are broken.”

With far less decimation to human flesh than Roth’s previous adventures of hormonal comeuppance (“Hostel”), “Knock Knock” speaks mostly in comedic beats despite the dark psychological places it inhabits. As Izzo described, “It’s tricky because there’s so much comedy, which makes it natural, because as humans we deal with dark things and emotions with laughing and uncomfortable jokes. But we’re talking about young girls at the end of the day, and it’s such an interesting script because of that.”

The discomforting comedy of “Knock Knock” can be quite vivid, and within the fetishistic nature of Roth’s unabashed storytelling. Incest and pedophilia are just a few of the elements that “Knock Knock” brings into its horrifically awkward playtime. While one can assume that nothing was out of bounds for a Roth set, who came up with these weird bits of charcoal comedy?

“All of those jokes,” answered de Armas, “you can ask Eli.” To which Izzo interjected, “Actually, I did come up with a few. I mean, I did marry him.”

The downfall of Evan’s character and the catalyst for the film’s “Funny Games”-like shenanigans is summated with the term/future-Twitter-trending-topic “free pizza.” It makes for the movie’s most unforgettable passage, as expressed in a monologue from an uncharacteristically impotent Reeves. Who do we have to thank for this bizarre, quaint metaphor? 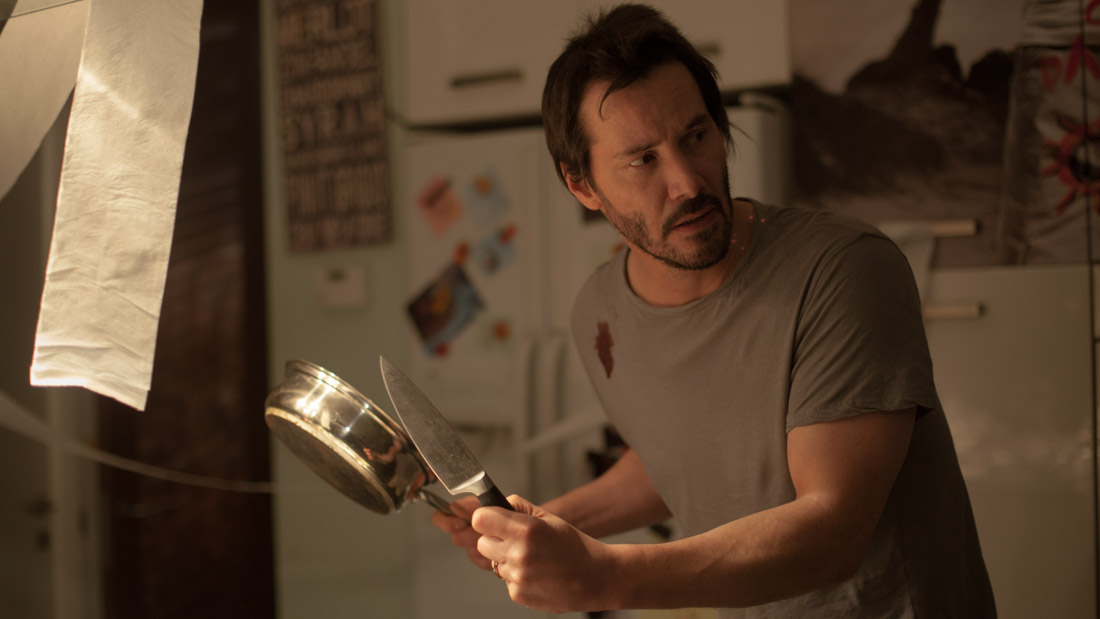 “It’s a theory that I’ve had,” stated López. “If you’re with somebody, you’re not supposed to cheat. But if you’re at your house and you just ate, and if somebody came to your door to give you free pizza, you’re going to have a slice. Evan doesn’t want free pizza, he didn’t ask for free pizza, but it’s free pizza.” “You can throw the pizza box away,” Burns added. “And nobody would ever know!”

“The whole thing about the movie being called ‘Knock Knock’ is that you decide to open the door,” concluded López. “When you open the door, bad things could happen, because you’re playing with fire.”

With recently-purchased “Knock Knock” proving fortuitous for both a less-torturous director and his one-of-a-kind lead, Roth and Reeves are both headed towards intriguing projects in the future. Up next for Chilewood is a straightforward comedy titled “I’m Not Crazy,” which Roth collaborated on and Lopez will direct. And by the end of 2015, Chilewood hopes to be working on Roth’s next directorial project, “The Hive.” A horror sci-fi about the disappearance of bees, the script is nonetheless a collaboration between Chilewood and “American Hustle” director David O. Russell.

As for Reeves, he has a vibrant excitement regarding his upcoming acting filmography. “I don’t have a particular genre that I’ve been looking at,” said Reeves. “If I looked at what I’m doing [next], there’s action, a little near-future sci-fi, there’s comedy, there’s medium big budget and low budget, and there’s lead and supporting roles.” But when I told the budding filmmaker behind 2013’s “Man of Tai Chi” that I can’t wait to see what he does next behind the camera, he offered a humble smile, and knocked on wood.