Roger Ebert first attended the Telluride Film festival in 1980, during a period in which it was small and humble. Writing about its transformation from the vantage point of more than two decades later, Roger said: “The festival … has added so many state-of-the-art theaters … that it feels like the most happening art movie town in America.”

This year’s festival, which again ran over Labor Day weekend, offered an emotional and powerful reminder that Roger remains a palpable and deep presence at a festival that was one of his favorites. It is just one of the many ways Roger’s legacy to film culture and critical discourse on the movies is greater than ever.
Advertisement

Roger is gone, but blessedly he was everywhere for these four days in Colorado. In “99 Homes,” his searing indictment of criminal self-dealing governing the American housing crisis and its role in the subsequent economic collapse, director Ramin Bahrani dedicated his movie to Roger. This was, significantly, not at the end of a long crawl of other technical credits. It came right at the top, just after the major possessive credits. Bahrani emphasized Roger’s importance to his life and career.

Following the film’s screening at the Galaxy Theater on Labor Day morning, the great German director Werner Herzog moderated a discussion with Bahrani, providing a chance for two quite different men and artists who were linked by their connection, personally and artistically, with Roger. After Roger lost his battle with cancer in April of last year, the festival’s top two directors, Julie Huntsinger and Tom Luddy, formally dedicated part of last year’s 40th edition to Roger.

Last year also saw the formal opening of the Werner Herzog Theater, a beautiful 650-seat theater built to satisfy the festival’s explosive growth. A major donation, made anonymously in recognition of Roger, helped subsidize its construction. 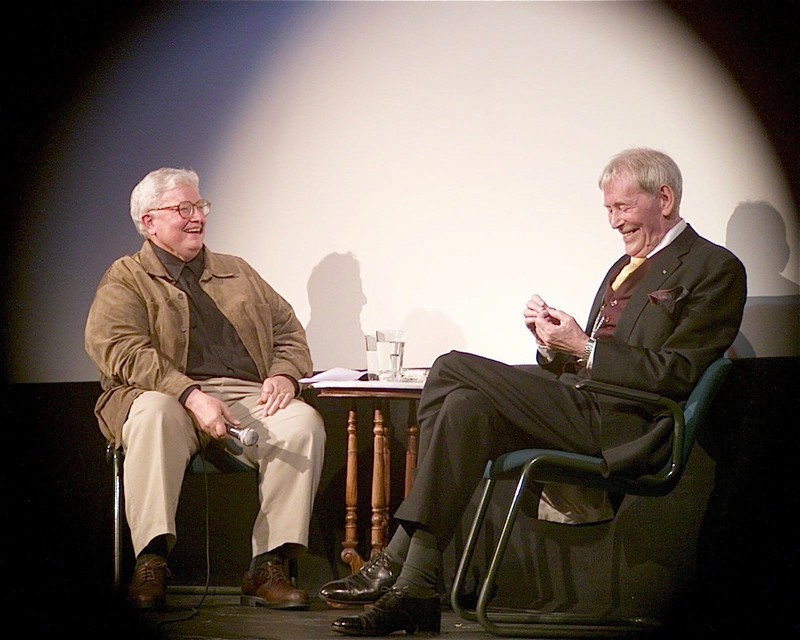 Roger was closely identified with the festival. For many people who had never been there, Roger was their gateway. Unlike Cannes or Sundance, Telluride has never been an emphatic destination for critics for a variety of logistical and practical factors, principally its proximity to Toronto, where the vast majority of critics and entertainment press decamp. Roger sang Telluride’s praises often, and the love was certainly reciprocated.

In one of the most gracious acts of top programmers Huntsinger and Luddy this year, they organized several screenings of “Life Itself,” Steve James’ highly prized documentary adaptation of Roger’s memoir. Even though the film has been in commercial release since July, the festival provided a tribute screening, at the Abel Gance Open Air Theater on the Thursday night before the festival’s official start. The screening launched this year’s festival.

“Roger was a man of habit,” James said. “When he found something he enjoyed doing, he did it every year. Cannes was that way, and I think Telluride was that way.”

The deep communal connection and love affair with movies created its own utopia, Roger liked to say. From that festival dispatch of 2005, Roger said: “Local hotels and ski lodges double their prices for the festival, but moviegoers share lodgings and sleeping bags and everyone seems reasonably cheerful because the films are so good and it’s fun just to stand in line with people who are as interested in movies as you are.”

People arrived that Thursday night to secure the best location. Colorado Avenue is the Telluride equivalent of Main Street, bisecting the town and serving as the major nexus of the festival. The Abel Gance Theater slopes down off Colorado Avenue. In tribute to Roger, people walking around the street that night were quiet and respectful.

The response at Telluride mirrored that of pretty much every other festival the film has shown. Several people, leaving the park, offered short, succinct responses to the film. “I thought it was a beautiful love story,” a woman from Oakland said. Her friend, who was from Chicago, called the movie touching and beautiful. “My husband died from cancer, so I could relate to a lot of the film,” she said.

“What was really cool about Julie and Tom is they wanted to find a way to include the film in the festival even though it’s many months past its premiere so they could share it with people who got to Telluride and really loved Roger,” James said.

On the opening Friday of the festival’s official screenings, approximately 50 students from the University of Colorado in Boulder and the University of California, Santa Barbara, many of them either journalism or film students, watched the film at the Nugget Theater. Ken Burns, the celebrated maker of historical documentaries and on the festival’s Board of Governors, talked about Roger and the film with James and Chaz Ebert.

During their time at the festival, the students watch films and attend seminars and discussions with other visiting filmmakers. The students comprised the inaugural class of the newly endowed program called the “Roger Ebert University Seminars.”

“It’s an amazing experience to see this as my first Telluride film,” one student said afterward. “I didn’t really know that much about Roger Ebert, and it was amazing to find out and have the honor of meeting his wife, Ken Burns and Steve James.”

Interacting with the students in the Roger Ebert University Seminars program was especially gratifying, according to Chaz. “They were so perceptive and appreciative of everything, and their professors seemed equally engaged,” Chaz said.

“When a student named Lael Siler asked the question after seeing the movie about whether I have felt that ‘wind of peace,’ in other parts of my life since Roger's death, I knew this was a class well on its way to that path of empathy that Roger so often spoke about.”

In one of the most quiet and lyrical moments of “Life Itself,” in the final third of the movie, James works in a mosaic of photographs of Roger at work. One of them is Roger, pensive, reading a newspaper and sitting on a park bench. The undated photo was taken at Telluride. In his opening night remarks, James thanked the festival for showing the film. He talked about a movie as a series of love affairs, Roger’s passion for journalism, Chicago, cinema, and of course, Chaz. “Those kids were greatly impressed and really moved by the film,” James said.

The filmmaker was continually intercepted by the students through the course of the festival. “The movie ended up meaning something to them,” James said. “I don’t know how many of them knew about Roger going in, but they came out feeling something.”

Telluride exists, Roger said, to “see films that can be seen nowhere else—and might, for that matter, never be seen anywhere again.” Telluride’s official program widely quotes Roger’s famous remark that the festival is like “Cannes died and went to heaven.” Telluride runs by in a breeze. Roger always made sure its meaning and value endured. The festival paid that warmth and generosity back with a vengeance.