Robbers and strippers, battles and burlesque 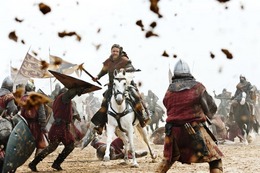 The volcano gods were in a snit on Monday, and I arrived in Cannes on Tuesday six hours later than planned, following some frustrating encounters with ticket agents in Frankfurt Airport. Chicago Tribune critic Michael Phillips was on my flight from Chicago, having had his entire original reservation canceled due to drifting volcano ash. I heard delay stories everywhere, and figured I got off easy.

After fast dash to the Palais des Festivals five minutes before the office that issues accreditation badges closed, I picked up my press badge and film market badge. The Cannes skies were dark and threatening, with fog hanging over the distant mountains. I hoped that this wasn't a sign of weather gloom to come.

The opening day of the festival turned out to be mostly sunny and mostly balmy. Cate Blanchett wouldn't need to worry about her evening gown getting soaked as she ascended the red-carpeted steps with Russell Crowe, and Max von Sydow. I wasn't going to be there, since I was seeing "Robin Hood" at the 10:00 am press screening. I ran into industry-astute IndieWIRE writer Ann Thompson on the way in, and ended up sitting with Vogue film critic John Powers, his screenwriter wife Sandi Tan, and Village Voice critic Jim Hoberman.

Contrary to my expectations, "Robin Hood" is more of a war epic with some romance on the side. There's very little creeping through the woods, and in fact, the exploits for which the historical Robin was known are depicted only in one brief attack on a wagonload of grain sacks. Robin turns out to have been a key player in 12th-century politics, deflecting an attempt by the French king to invade England and changing the course of history. Who knew? Maybe I should have read the press kit first. 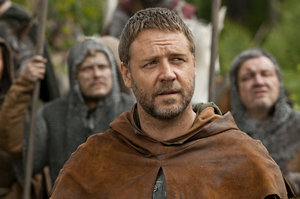 Crowe is appropriately hunky and manly, but gets some snicker-worthy lines like "Every Englishman's home is his castle," and "That's a lot of French." Blanchett, in a disconcertingly ugly Morticia wig, is a feisty feminist Lady Marianne, who plows her own fields and rides her horse astride at a time when noblewomen rode sidesaddle. She eventually suits up in full battle regalia, including the chain mail.

The primary focus of "Robin Hood" is on the battle scenes, with flying arrows, boiling oil, and tumbling bodies. Soaring, swelling orchestral and choral soundtrack music is such a prominent feature of these battle scenes that I couldn't help but think that in a way, we were experiencing a return to the method of silent movies. Sounds such as grunts, swords clashing, and horses neighing became irrelevant, as the music shaped and interpreted the scenes.

I took my first trek through the film market before the jury press conference, picking up press kits and production guides for nations including Greece, Estonia, Turkey, and Slovakia. I had a meeting at the Greek film stand, which like many of the market stands that are located in a row of cabanas outside the Palais, has its own little stretch of beach with tables, umbrellas and chairs. 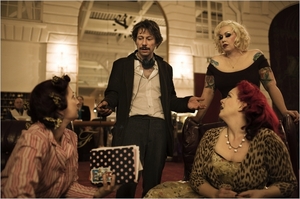 Mathieu Amalric and cast on the set of "On Tour."

"Robin Hood" screened out of competition, so the competitive aspect of the festival really began in earnest with the evening press screening of Mathieu Amalric's "On Tour." A major French star who has worked for directors including Luc Besson, Alain Resnais, Arnaud Desplechin, Julian Schnabel, Claude Miller, and Andre Techine, he's a charismatic and daring actor who often opts for a dose of humiliation in his roles. "On Tour" is the fourth feature he's directed, and the first in which he directs himself.

Amalric plays Joachim, a smalltime producer on tour with the burlesque troupe he's organized with five American performers. Joachim has a pinched, sleazy look; he's thin and nervous, with a small, brushy mustache. For reasons revealed in the course of the story, he needs to avoid Paris, and so, to the disappointment of his raucous, fun-loving stars, he's scheduled his tour exclusively for a string of small coastal cities around the periphery of France. 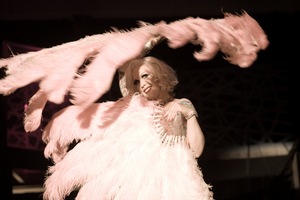 That "On Tour" is largely about "new burlesque," and features real-life American burlesque performers with stage names like Mimi Le Meaux, Kitten on the Keys, and Dirty Martini, interested me from the start. How could a film with all that plus Mathieu Amalric going for it go wrong?

In the first half hour there's no significant burlesque action, which seems puzzling for a film centered on the backstage world of burlesque, and possibly not a great choice from a box office point of view. Early in the film, the women are seen in states of undress, and there are many arguments with Joachim. "On Tour" finally settles into a disjointed, clunky rhythm, and develops a subplot concerning Joachim's relationship with his two young sons. When we finally do get to see the strippers playing to large, approving French audiences, the burlesque appears graceless and amateurish, which seems unforgivable in film that has gone to some lengths to portray them as warm, kooky goddesses of their art.