In the New York Film Festival’s early years, documentaries showed up as occasional features in the Main Slate. With the addition of the “Spotlight on Documentary” section a few years back, however, the burgeoning tradition of non-fiction film has happily come to occupy a prominent place in the festival’s line-up. In a pair of documentaries it premiered this year, the NYFF served up estimable films that put the spotlight on two famous but very different aspects of New York life.

James Solomon’s “The Witness” concerns the case of Kitty Genovese, whose 1964 murder in Queens sparked a national outcry. Like other critics I spoke with afterwards, I thought I knew the angle it would take. When the attractive 28-year-old bar worker was slain, news reports—especially a front-page story in the New York Times—alleged that dozens of her neighbors watched the crime unfold over a half-hour but did nothing to help her; the incident became a shocking symbol of modern urban anomie and a pandemic fear of “getting involved.”

Not so. It turns out that more than a decade ago, the filmmaker was involved in trying to put together an HBO dramatic film about the Genovese case with playwright Alfred Uhry and documentarian Joe Berlinger. When that project failed to achieve lift-off, Solomon decided to make a documentary on the subject in partnership with Bill Genovese, one of Kitty’s three surviving brothers. “The Witness” has been eleven years in the making.

For Bill Genovese, a retiree who lost both legs in the Vietnam War, the film represents an attempt to discover the truth behind the muddled media reports of his sister’s slaying, as well as to achieve a personal emotional resolution regarding an event that so traumatized his family members that they went into a decades-long silence about it. In lesser hands, that premise might have led to a gimmicky or maudlin film, but Solomon’s skills together with Bill’s sincerity and intelligence make “The Witness” thoughtful and satisfying.

Despite his disability, Bill gets around nimbly, and Solomon’s cameras follow him as he revisits the scene of the crime and talks with those who were there at the time. As the original news stories correctly reported, Kitty was coming home late when a man stabbed her from behind; she screamed loudly, then made her way into her building’s vestibule, where the assailant returned a half-hour later and murdered her. However, the Times’ claim of “38 witnesses” who ignored her plight seems to have been a number pulled out of thin air; many heard her screams but, contrary to the Times, most could not see the crime. Unquestionably, some who could’ve acted to help her did not. But one woman says that she called the police, who told her others had done so (a claim that can’t be substantiated). And contrary to the reports that his sister died alone, Bill speaks with a neighbor and friend of Kitty’s who tells of holding her when she breathed her last.

While the Times’ sensationalistic distortions play a part in Solomon’s account, his film’s real achievement lies in illuminating the tragedy’s nuances and human complexities. Kitty, her favorite younger brother Bill, their family and many others involved in the case, emerge as real, vulnerable people rather than convenient media symbols. 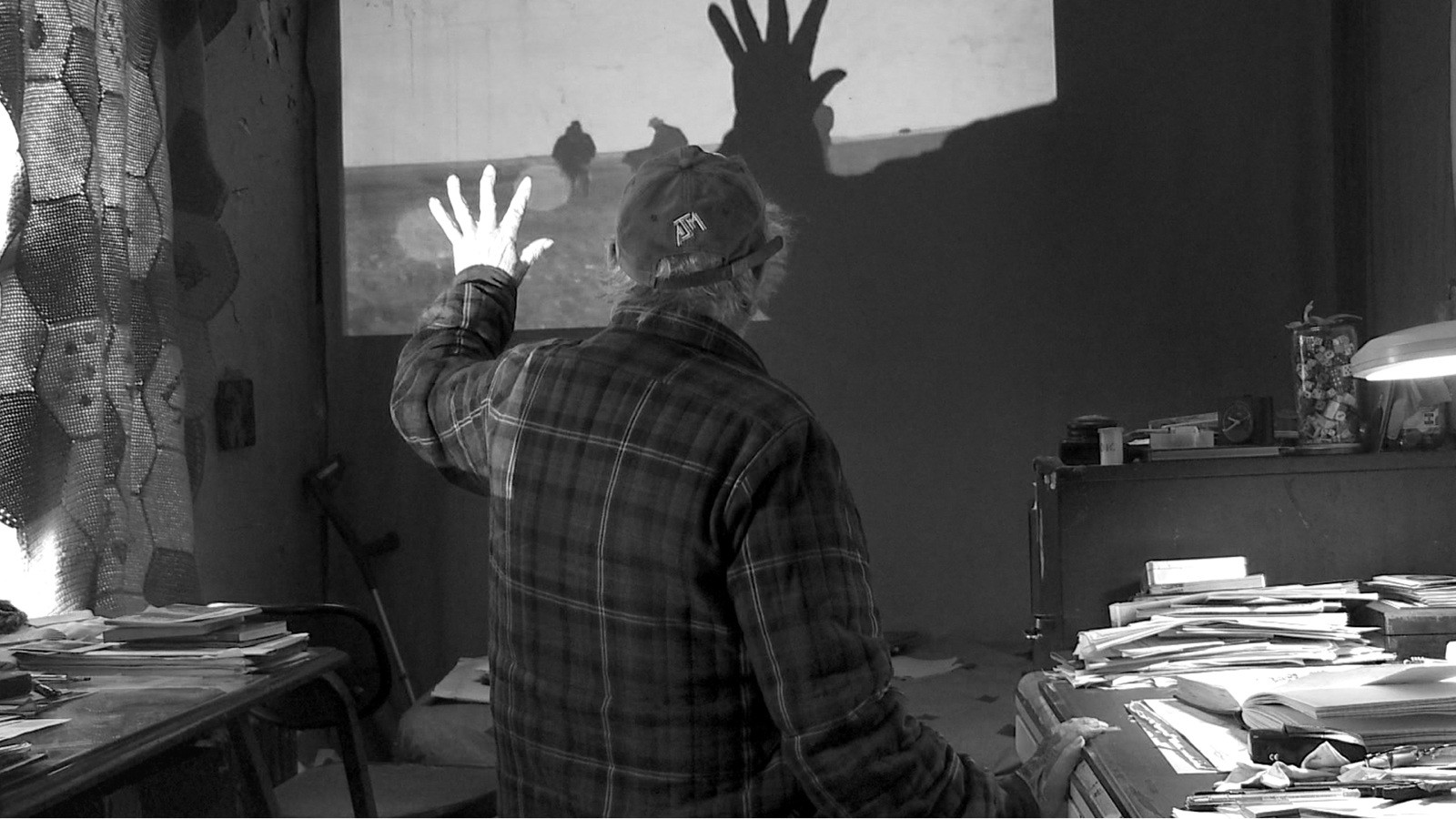 A different kind of human richness is at the heart of Laura Israel’s “Don’t Blink – Robert Frank,” an agreeably jumbled portrait of a singular New York photographer and filmmaker. Most people probably know Frank’s work from the striking images in his landmark 1958 book “The Americans,” his innovative Beat Generation short film “Pull My Daisy,” or his spell of work with the Rolling Stones, including the collage cover of “Exile on Main Street” and the seldom seen tour film “Cocksucker Blues.”

While those achievements would certainly add up to a formidable reputation on their own, “Don’t Blink” shows how much more there is to Frank’s oeuvre (the artist is still going strong at 90). Yet the film gives equal attention to the man and how his sensibility is expressed in countless aspects of his life. Having edited films for him since the early ‘90s, Israel is a friend and collaborator, but not an acolyte. Her knowledge of Frank allows her to create an informed, intimate film that’s funny, warm and multi-faceted, never reverential.

Not surprisingly, her stylistic approach has much in common with Frank’s own. The film’s formed like a mosaic or collage, moving back and forth through time, intermixing footage with Frank interviews from over the decades, jumping from his Lower East Side studio to his rugged Novia Scotia retreat, observing his interaction with friends such as Ed Lachman and Tom Jarmusch, and showing the place in his life occupied by his artist-wife June Leaf and his daughter and son, both of whom died tragically young.

Born in Switzerland, Frank comes across as a quintessential downtown character, sometimes laid-back, sometimes cranky, but always insightful and true to his own vision. While the film reminds us that “The Americans” was initially regarded as shockingly dark and “anti-American,” today its images seem classical and well-nigh idyllic. With a soundtrack that includes music by the likes of Charles Mingus, the Velvet Underground, the Mekons and Yo La Tengo, the film aptly poses Frank as a figure who embodied and influenced several eras of artistry, from the Beats through punk and beyond. In focusing on one man, “Don’t Blink” also chronicles a half-century of New York creativity and irreverence. 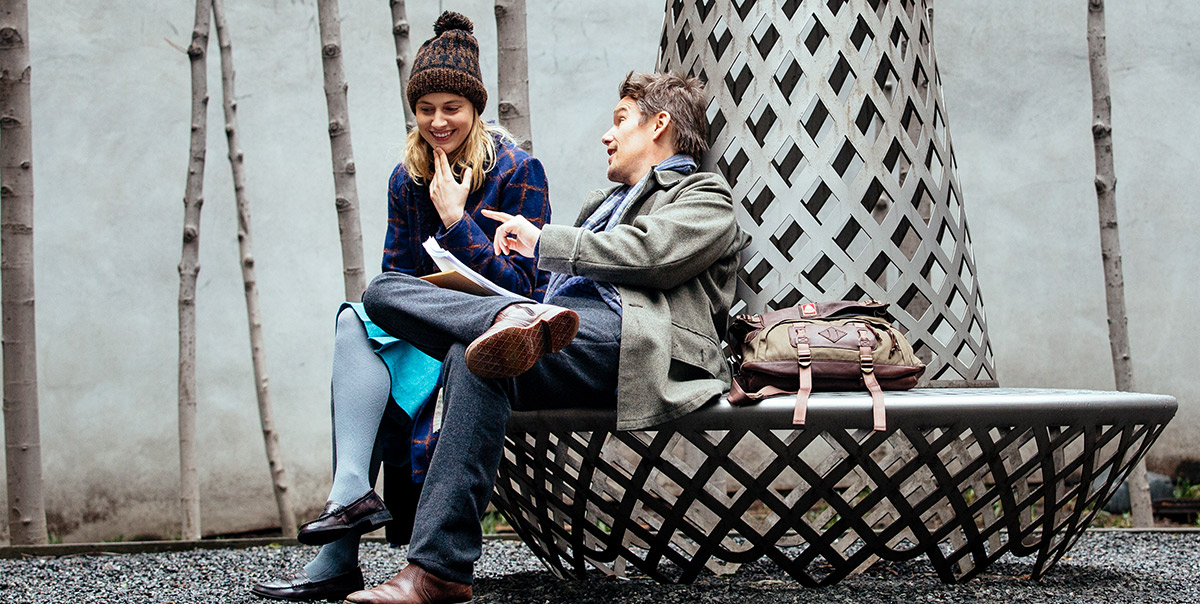 Speaking of New York stories: Among the narrative features in the festival’s Main Slate, the most bracing surprise so far has been Rebecca Miller’s “Maggie’s Plan.” The film’s title can use a bit of unpacking. In fact, its story takes place in two time periods and each shows Maggie (Greta Gerwig) hatching a plan. In the first, she’s convinced she’ll never be able to sustain a relationship, so her plan is to have a child by a sperm donor and raise it by herself. But then she meets John (Ethan Hawke), a married New School academic and frustrated novelist, and almost instantly falls for him.

Cut to three years later. Maggie and John are now married and have a daughter. He has left behind his Danish-born wife Georgette (Julianne Moore) and their two children. She’s an egghead department chair at Columbia who wears black nail polish and has written a bitterly vindictive book about her and John’s break-up. But now Maggie’s got a new problem. Supporting John but realizing he’s supremely self-involved, she finds herself falling out of love. So her new plan is simple: get John and Georgette back together. For a while, it actually seems to make sense.

Watching “Maggie’s Plan,” I couldn’t help but think of another artist-centered documentary in the festival, “Everything Is Copy,” about the late Nora Ephron. Ephron was a very funny writer and observer of modern mores, and sometimes a filmmaker with a unique flair for character-based comedy and sharp performances. I think “Maggie’s Plan” is right up there with her best work. In its writing and direction, it couldn’t be more droll, satirically pointed and effortless accomplished. And its three lead performances are some of the best work these actors have ever done. Thoroughly pleasing and impressive on every level, it establishes Miller as a major talent, and should wow audiences both at the festival and when it goes into general release.