Though the New York Film Festival has historically given the impression of looking east, toward Paris, Cannes and other European cinema capitals, rather than west, toward Hollywood, the event’s final week featured three movies that have the makings of likely Oscar contenders. Danny Boyle’s “Steve Jobs,” the 2015 festival’s Centerpiece, proved to be enormously impressive for the strength of Boyle’s polished, energetic direction, Aaron Sorkin’s characteristically dense script and the terrific performances of Michael Fassbender, Kate Winslet and Jeff Daniels. On the nonfiction side, Michael Moore’s “Where to Invade Next” emerged as one of the filmmaker’s most accomplished and enjoyable films, with a generosity and warmth of spirit sure to disarm anyone who associates Moore’s wit solely with rancor and sarcasm.

Then there’s Steven Spielberg’s “Bridge of Spies,” whose world premiere at NYFF 2015 was a major feather in the festival’s cap. This reviewer will confess to harboring a longstanding admiration for Spielberg’s history films; “Amistad” and “Munich” both occupied the top spot on my annual 10-best lists in their respective years. While “Bridge of Spies” doesn’t quite reach those heights, it is a fascinating, beautifully realized addition to a corpus that also includes “Schindler’s List” and “Lincoln.”

One thought that the film might well prompt concerns the curious reality that major movies about the Cold War were virtually non-existent during that almost five decades-long global stand-off. While younger viewers today may find the nuclear competition between Communist Russia and the West distant and non-resonant, those who grew up under its shadow will surely recall the mood of tension and gloom it made virtually omnipresent, which is why its non-appearance as a dramatic subject in American movies of the era now looks strikingly odd. Apart from a rare satire like “Dr. Strangelove” or a thriller like “The Manchurian Candidate,” Hollywood almost seems to have been on a massive campaign to distract the nation from the looming threat of Mutually Assured Destruction. 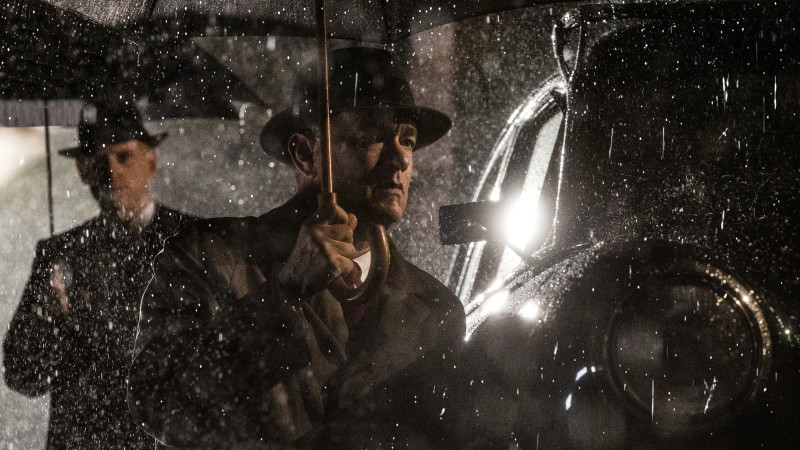 Looking back a quarter-century after the fall of the Berlin Wall, Spielberg eventually escorts us back to that great symbol of the division between the free world and the captive East, but he starts off making a useful distinction. When Rudolf Abel (Mark Rylance, in a brilliantly honed performance), the top Soviet agent in the U.S., is arrested by the FBI and charged with espionage, Brooklyn attorney James Donovan (Tom Hanks) is asked to defend him, and Donovan’s wife (Amy Ryan) voices her fierce objection to his defending a traitor. But Abel is not a traitor, he replies, because he’s not an American. He’s a spy. The Rosenbergs were traitors; they betrayed their country.

This mention of the Rosenbergs’ guilt will of course not endear Spielberg to some on the left, but it subtly sets the film’s moral compass at the outset, suggesting that there was a basic difference between our side and theirs just as there is between those who serve and those who betray. With this established, the movie proceeds to evoke an era where TV was black-and-white and reality itself often looked gray or muddily brownish. In this grim world, Donovan’s defense of Abel eventually takes him to the Supreme Court—and earns him the anger and hostility of many of his fellow countrymen—but his battle to save him from the electric chair is effectively won much earlier, when he says this to the first trial judge: rather than executing Abel, it’s better to consign him to prison in case the U.S. ever needs to exchange him for an equally valuable operative of our own.

That’s what happens after a U2 spy plane piloted by Francis Gary Powers is shot down over Russia on May 1, 1960. Powers was not a soldier working for any branch of the U.S. military; he was a spy working for the CIA. The story of the U2 program, which had successfully brought the U.S. invaluable intelligence in the preceding years (the plane flew so high that, until 1960, the Russians couldn’t shoot it down), is a fascinating one. But “Bridge of Spies” mostly ignores it, and sometimes fudges the reality, like when suggesting that Powers was shot down on his first mission when in fact he had several years of successful flights behind him by 1960. But all this is understandable, given that Spielberg’s film remains focused on Donovan and his effort—acting as a private citizen, though at the best of the U.S. government—to get Powers exchanged for Abel. 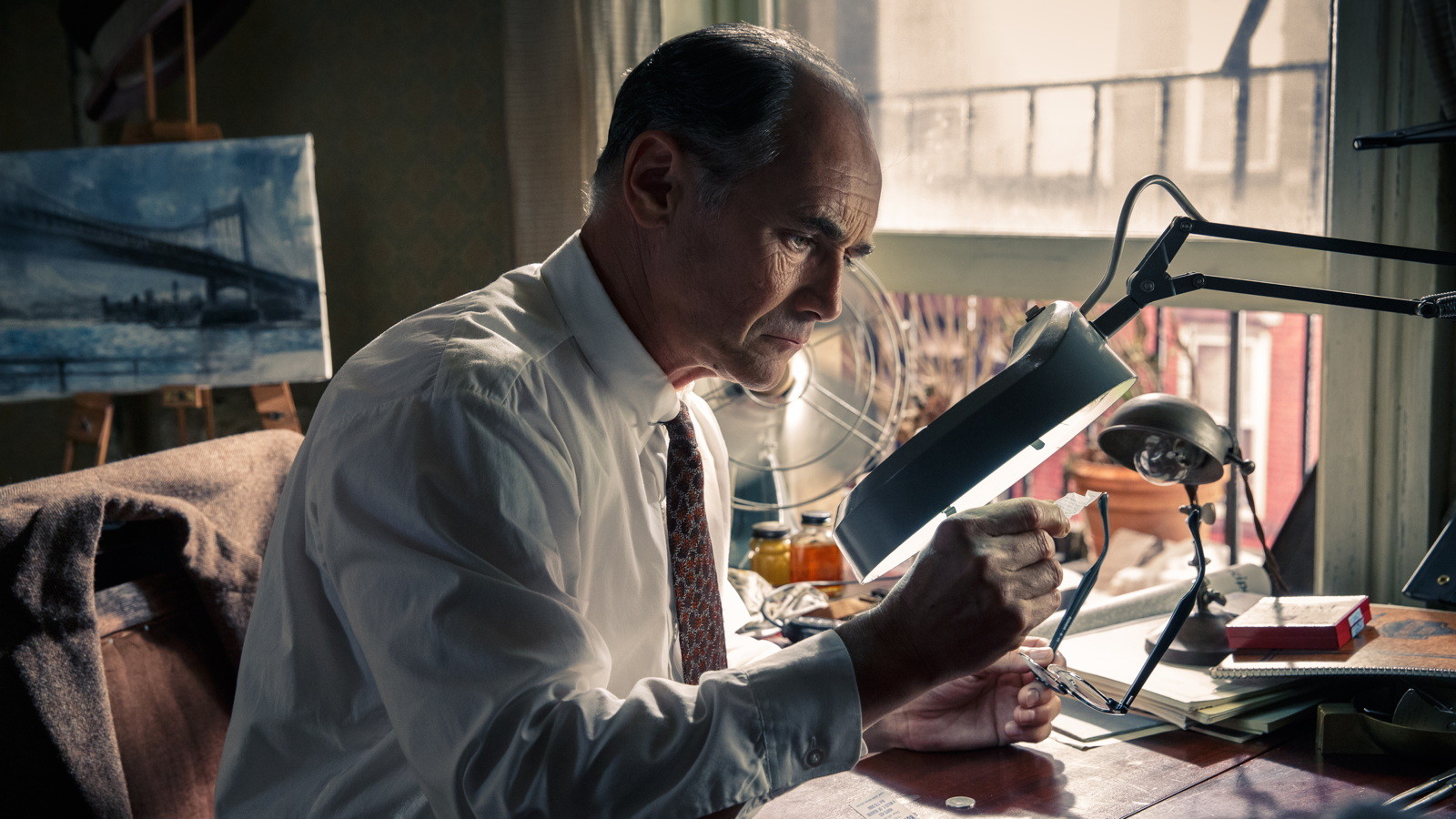 Almost the opposite of a hectic, noisy actioner like “Munich,” “Bridge of Spies” is a notably measured and quiet film. Spielberg uses very little music; the soundtrack almost seems hushed so that we can hear Donovan thinking, or the snowflakes falling on wintry Berlin. This restraint, accented by Janusz Kaminski’s eloquently muted color cinematography, not only fits the mood of the times; it also seems to reflect Spielberg’s confidence in the subtle intelligence of Matt Charman and Joel and Ethan Coen’s script and the unshowy power of Tom Hanks’ central performance.

There’s a classicism here that again places Spielberg alongside John Ford in his contemplation of American character, both national and individual. Nationally, he tells us, we are distinguished from other countries, especially tyrannies like the USSR, by our adherence to the U.S. Constitution (the dialogue relating this rhymes with that of John Quincy Adams’ speech at the climax of “Amistad”). Individually, we sometimes produce men as principled and courageous as Jim Donovan, who will stand against popular opinion and even the risk of ignominious failure to do what he feels is right. You can imagine Jimmy Stewart or Henry Fonda playing this role, but not any better than Hanks, who again proves he’s one of the great screen actors of this or any generation. His work here helps make “Bridge of Spies” another masterful Spielberg excursion into U.S. history. 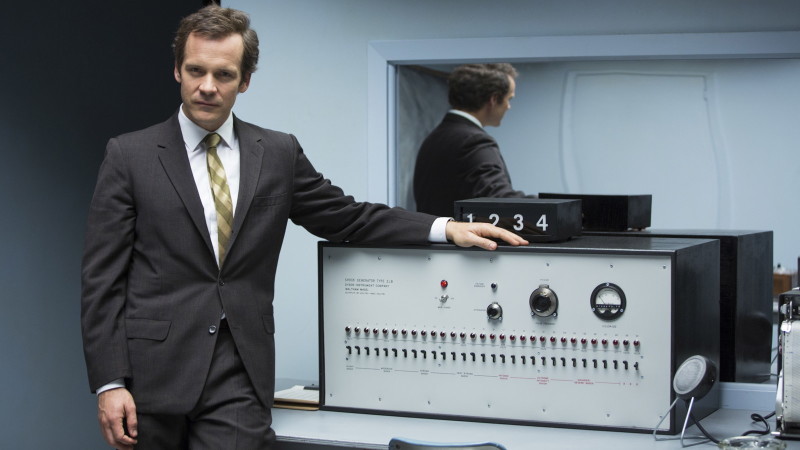 Though Michael Almereyda’s “Experimenter” will get more detailed attention here when it opens theatrically later this month, suffice it to note that it was one of the NYFF’s most bracingly inventive films, as well as one that, like “Bridge of Spies,” concerns the role of science during the Cold War. As idiosyncratic as Spielberg’s movie is classical, Almereyda’s exploration of the life and ideas of controversial psychologist Stanley Milgram starts out with an extended sequence in a 1961 Yale psych lab where one subject is told to give increasingly painful electric shocks to another if the latter gives wrong answers to multiple-choice questions. The shocks aren’t real and neither are the reactions to them; contrary to what the subjects are told, the point of the experiment is to see how far people will go in obedience to an authority figure, in this case a scientist.

Milgram, an American Jew, was trying to understand how ordinary folks, such as Germans during the Holocaust, could be induced to commit horrors they normally wouldn’t countenance. The ideas produced by his experiments became famous and are still being debated today. But “Experimenter” is fascinating not only for what it shows us about Milgram, an odd, ambiguous character brilliantly played here Peter Sarsgaard. It’s additionally engrossing due to its own formal stratagems, which include a deliberately chilly tone, occasional rear-screen projections and such surreal touches as the anomalous appearance of elephants in university hallways. Easily one of the most intelligent and distinctive of 2015 art-houses releases, "Experimenter" was an apt selection for the famously auteur-centric NYFF.