Day three included two of Ebertfest’s most anticipated events: the return of fest regulars The Alloy Orchestra presenting their latest live musical accompaniment to a silent film classic and the arrival of the woman who is arguably the greatest actress working in the cinema today, Isabelle Huppert, to present her latest triumph, the shocking Paul Verhoeven thriller “Elle.” The expectations may have been elevated for this particular day but those two events, in addition to the fine and stirring documentary that kicked things off, more than lived up to the hype.

The day’s program started off with a special treat, “July and Half of August,” a short film directed by Brandeaux Tourville and written by RogerEbert.com contributor Sheila O’Malley. It observes Neve (Annika Marks) and Jack (Robert Baker), two former lovers who reunite at a bar one night a few years after the end of their relationship—whose length gives the film its title—and hash over things in a conversation that becomes increasingly fraught with doubt and denial as it goes on. Because, as I mentioned, O’Malley is a contributor to this site, giving the film any sort of proper review might not seem very proper and I will therefore avoid doing so. In other words, I am not going to tell you that the screenplay is quite strong in the way that offers us two fully fleshed-out characters and convincingly depicts the way that the two lie to each other and themselves about what happened in the past and how it continues to affect them to this day. I am not going to mention that Tourville manages to make the film visually striking despite taking place entirely inside a dingy bar—a redressed Green Bay Packers bar, no less—by knowing just the exact moments when to cut from one person to the other, and through the striking black-and-white photography. Most of all, I am certainly not going to mention that O’Malley mentioned that the short is actually part of a proposed feature film chronicling the entire relationship of Neve and Jack and that, based on the portion shown here, I can’t wait to see the rest of it. 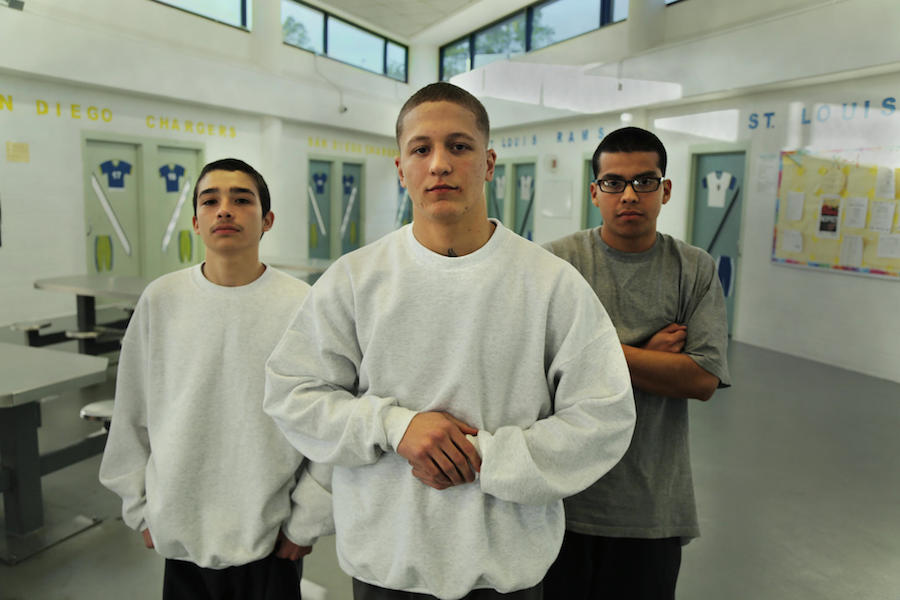 This was followed by the documentary “They Call Us Monsters,” which was presented at the festival by director Ben Lear and co-producer Sasha Alpert. The film follows three young men in a juvenile detention facility—Jarad, Antonio and Juan—who are participating in a screenwriting program taught by teacher Gabriel Cowan and tracks their fates as they make their way through the court system that is contemplating trying them as adults for crimes that, while undeniably heinous in nature, were committed when they were teenagers. From the sentence I have just written, you have no doubt already created a picture in your mind of what the film is like and I assure you that no matter what you are thinking, it is almost certainly incorrect. Instead of focusing entirely on Cowan teaching his students about the beauty of art as an alternative to the violence and cruelty that they have known for most of their lives, it uses the screenwriting sessions as a leaping-off point to examine their lives and delve into the reasons why they landed where they are. (We do get to see scenes from the screenplay they come up with staged with actors by Cowan that are sprinkled throughout the film.) At the same time, the film does not necessarily let them off the hook either by depicting them solely as misunderstood kids in a bad situation—at one point, there is an interview with a victim of Jarad’s drive-by shooting and is now paralyzed as a result, reminding us in the starkest possible terms that while our subjects had been dealt a number of bad breaks in their lives, their actions did hurt others. We also get a look at how the outside system affects their fate, whether it be through the debate for Senate Bill 260, which is designed to give people who did commit crimes as a minor more opportunities to work towards rehabilitation and parole, or through the actions of a lawyer who brags about her abilities going in but who proves to be incompetent at her job.

During the post-screening Q&A, Lear (the son of television producer and 2017 Ebertfest guest Norman Lear) mentioned that he first became inspired to make this film while researching a conventional feature project that he then put aside. I don’t know what, if anything, will become of that but it is hard to imagine any feature conveying the same degree of power as “They Call Us Monsters.” (The film is current scheduled to appear on PBS in May. Additionally, The Chaz and Roger Ebert Foundation did provide a donation that went towards the film’s social action campaign.) 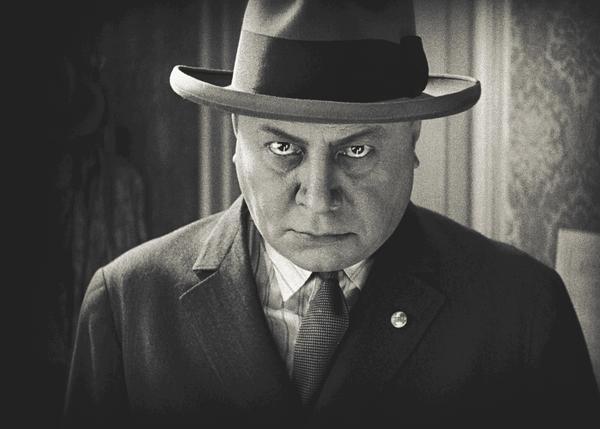 Next up was The Alloy Orchestra, a three-man ensemble that has made a name for themselves creating and performing original scores for silent movie classics utilizing an array of off-beat instruments, which includes everything from synthesizers to banjos to musical saws. To see them perform live is an extraordinary experience—watching them in the orchestra pit as they use their instruments to create any number of vividly depicted soundscapes is so mesmerizing that they are as compelling as the films they are scoring, not an insignificant quality  since they have added their talents to some of the greatest silent films ever made. This year’s offering was “Variete,” an extraordinary 1925 film that combined the talents of three of the most celebrated members of the German film industry of the time—director and co-writer Ewald Andre Dupont, actor Emil Jannings and cinematographer Karl Freund—in a visually stunning melodrama of such outsized emotions that it could only have been from the silent era because films today are just too timid to go to the lengths that this one does. Told in a series of flashbacks from the confines of prison, it tells the strange and sad story of Boss Huller (Jannings) and how he wound up where he is. When we first see him, he is a former acrobat who is now a reasonably happy family man with a wife and an infant child whose life is turned upside down with the arrival of Bertha-Marie (Lya de Putti), a beautiful young acrobat who has just arrived from parts unknown. Boss is instantly besotted and after putting up a token resistance at best, he decides to leave his wife and kid and go off with Bertha-Marie to begin a new acrobatic act. Along the way, they pick up a third partner in Artinelli (Warwik Ward) and for a while, things go swimmingly but it quickly becomes obvious to everyone but Boss that something is developing between Artinelli and Bertha-Marie. When Boss does finally discover what has been going on under his nose, let it be said that working without a net is no longer the most dangerous thing that any of the three have to face anymore.

As stated, the film is pure and unabashed melodrama and just a dry recitation of the facts might make it sound like a silly soap opera along the lines of the not-exactly-classic Burt Lancaster-Tony Curtis-Gina Lollabrigida drama “Trapeze” (1955) but “Variete” is anything but that. This is one of the most visually stunning films of the entire silent era as Freund conjures up a dizzying array of visual astonishments that make today’s lavish CGI spectacles seem somehow puny by comparison. And yet, the film works for more reasons than just the incredible technical achievements that Freund (who would go on to have a career that would see him shoot such classics as “Dracula” and “Key Largo” (1948), direct cult favorites like “The Mummy” (1932) and “Mad Love” (1935) and essentially invent the visual grammar of television with his revolutionary work on “I Love Lucy”) was able to pull off. Jannings, who would go on to win the very first Oscar for Best Actor, is a volcanic yet strangely touching presence as Boss and Lya de Putti is such a mesmerizing presence as Bertha-Marie that one has no trouble believing the ease with which she leads the men in her life along. Keeping it all humming along beautifully is Dupont, who effectively goes for broke in scene after scene without letting things go completely off the rails. Of the three key participants, his career was the only of the three that didn’t really make the transition to the sound era, a shame because based on his achievements here, one gets the sense that he could do anything. At one point during the post-screening Q&A, one of the members of the Alloy Orchestra commented on the use of a musical saw as a recurring motif in the film by describing it as being “romantic and disturbing,” a description that fits “Variete” perfectly. 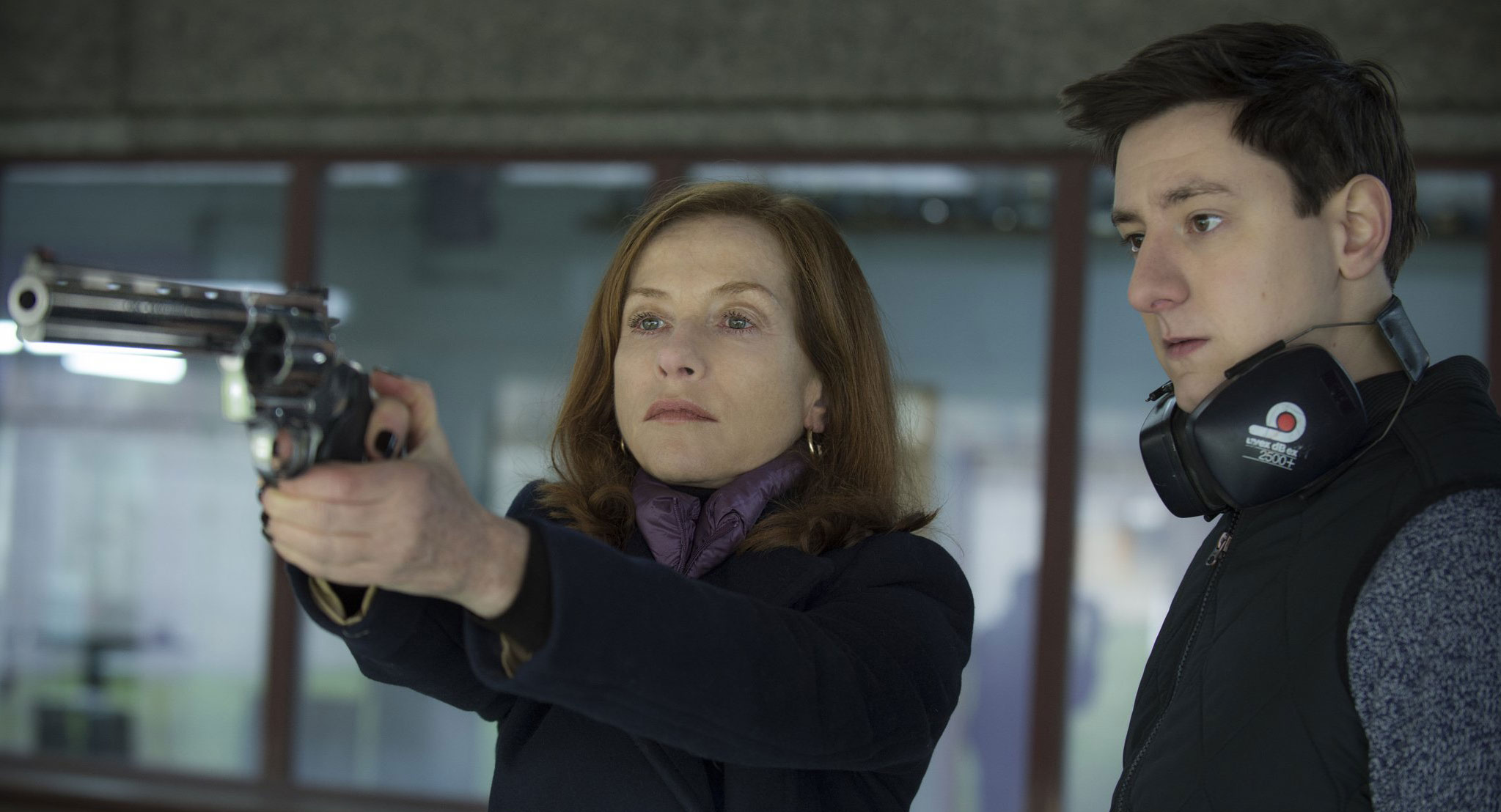 Topping off the day was “Elle” and as so much has been written about it since it startled audiences at its premiere at the Cannes Film Festival last year, I won’t going into an extended rehash of the plot, a Hitchcockian-style thriller about a tough and controlling business woman who, as the film opens, is violently raped by a masked attacker and, for reasons that gradually become clear and understandable, decides not to contact the police and instead begins her own cat-and-mouse pursuit that takes some very strange and unexpected twists and turns along the way. If you have seen it, then you know what a masterful work it is. If you haven’t, I don’t want to say anything about it that might spoil it in any way. Instead, I offer only two personal observations after watching it again at the Virginia:

Led by Sony Classics co-president Michael Barker, who preceded the screening with a clip reel of some of her most memorable on-screen moments and an appreciation for her work in the masterful “Heaven’s Gate,” the post-screening Q&A with Huppert quickly became a celebration of her extraordinary career. Although her on-screen persona can come across as cool and resoundingly unsentimental, Huppert in person is an absolute delight and charmed the entire crowd as she discussed her career. Regarding “Elle,” she praised Verhoeven as someone that she always wanted to work with (“I could have been Robocop or a Starship Trooper!”) and revealed that she doesn’t overly prepare for her roles because for her, “moviemaking is always about the present time.” From there, the conversation expanded to encompass her entire career and covered topics such as “Rosebud,” the weird 1975 terrorism thriller from Otto Preminger that was one of her very first major films, the infamous production and reception of “Heaven’s Gate” (which she described as “an expensive dream”), working with filmmakers like Michael Haneke and the late Claude Chabrol and even touched on how impressed she was with the trained cat that provides some of the more memorable moments in “Elle.” Afterwards, she not only braved the occasionally oddball questions offered by the audience but stuck around for the post-screening party even after many of the other guests had left, a fitting end to a fairly unforgettable day.