There are few actors for whom I would wholeheartedly embrace a return to challenging roles as much as Tim Roth. There was a time in the early to mid-‘90s when Roth was an essential part of some truly great cinema, including Robert Altman’s “Vincent & Theo,” Peter Greenaway’s “The Cook, the Thief, His Wife & Her Lover,” and, of course, Quentin Tarantino’s “Reservoir Dogs” and “Pulp Fiction.” He even landed a well-deserved Oscar nod for 1995’s “Rob Roy.” Sure, he pops up in important movies twenty years later (like “Selma”), but he just doesn’t seem to be getting the juicy roles he once did. And two films that played at the Chicago International Film Festival this week prove that he still has the acting chops to deliver. A movie-loving boy can dream that these flawed works are just the warm-up for the true comeback that begins with this fall’s “The Hateful Eight.”

The superior of the two films is Gabriel Ripstein’s promising debut “600 Miles.” Ripstein’s measured thriller starts with a bit of a misdirection. We watch two young men navigating the world of gun purchases. Of course, we’re supposed to notice when one of them is asked for ID to buy cigarettes and not the ammunition in the same purchase. We soon learn that one of the near-teens—two boys who are constantly pretending to be men—is named Arnulfo Rubio (the natural Kristyan Ferrer) and is personally carrying the purchased weapons and ammunition over the Mexican border to arm a dangerous cartel. He is an immensely minor player in a major game, someone who seems destined to make a series of bad decisions before he dies at a young age. Will “600 Miles” be a cautionary tale about the innocent lives sucked up by the vicious world of illegal drug and gun running?

Yes and no. “600 Miles” takes a turn, and becomes something more interesting than that slow-burn first act, when we meet Hank Harris (Tim Roth), an ATF agent introduced in a parallel shot to the one that opens the film—shopping for guns. But Harris’ purpose is different—he’s kind of patrolling a local gun show, talking to vendors about unusual purchases and recording serial numbers in case the weapons pop up later at crime scenes. Harris is trying to take down some potential major gunrunners before they supply truly awful people with firepower when he essentially runs into Rubio. Of course, he has no idea who Rubio is—that’s how far this young man is down the chain. But Arnulfo panics. He ends up taking Harris hostage, choosing to take him back to Mexico and let his family figure out what to do with him. On the long journey, Rubio and Harris form a unique friendship as the ATF agent senses that this kid is just caught up in something WAY bigger than him.

Ripstein proves himself a very deliberate filmmaker, often shooting “600 Miles” in long, restricted takes. A scene in which Rubio and Harris are stopped at a checkpoint that seems to be run by a drug cartel has an added tension because Ripstein keeps us in the back seat with Hank, slowly turning the camera for a few shots, but providing no coverage or cuts. There are several shots of forced perspective like this, and while they sometimes feel like tricks designed to add tension to a screenplay that’s often lacking in it, they’re effective. However, the best thing about “600 Miles” is the performance by Roth, who brings a spark of energy to a film desperately needing it just through his remarkably engaged performance. He’s always been an actor who seems genuinely in the moment, listening to his co-stars, and responding in ways that feel organic. “600 Miles” is something of a near miss—mostly because it needed another rewrite to punch up its thinner characters and scenes—but Roth’s performance nearly saves it. 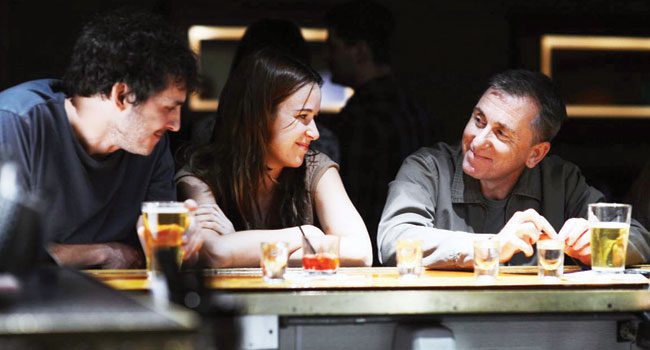 His acting work goes even further to salvage the frustrating “Chronic," featured in the festival's Main Competition. Writer/director Michel Franco's drama has some interesting commentary about grief and caretaking, but is ultimately undone by a simply horrendous ending, one that makes you question whether its creator ever had any idea what film he was making.

For most of its 92-minute running time, “Chronic” is a very meditative, nearly silent character study of a man who has chosen to give his entire existence to caring for others because of a tragedy in his own past. Is he atoning? Trying to do what he couldn’t before? Roth is David, a full-time caretaker for the very ill. “Chronic” cycles through a few of his clients in its running time, including a woman who is so thin she looks literally on death’s door, a man limited in his communication due to a stroke, and eventually a woman handling the pain of chemo. Franco’s approach is practical and unrelenting. We watch David shower his clients and feed them in real time. It’s a stark vision of the end of life, and a man willing to row these people across the River Styx.

If “Chronic” had just been that drama, I think Roth and Franco would have been up to the challenge. Unfortunately, it’s not just that movie. David spends his nights staring at the Facebook pictures of a young woman (Sarah Sutherland). Who is she? Why is he obsessed with her? And then David’s life unravels further when the family of one of his clients accuses him of sexual abuse. The charges are unfounded, but will this push David further into clear depression and make him do something desperate?

That in-the-moment ability of Roth to convey the large presence of his characters carries “Chronic,” and he’s the reason to see this challenging film. And so it’s particularly sad that Franco sells him out in the final beats, making you wonder the film’s entire purpose. Still, what we should be focusing on is that one of the best dramatic actors of 20 years ago is being cast in challenging roles in challenging films. Even if they aren’t successful, I’m glad to have him back.