It made some sense that "Risk," the new documentary from Laura Poitras—who won an Oscar for her Edward Snowden portrait "CITIZENFOUR" and deserved another for her earlier "The Oath," about a former bodyguard of Osama bin Laden's—had its premiere yesterday in the Directors' Fortnight, the parallel festival designed to represent the cinematic vanguard. It's hard to think of another documentary filmmaker today so committed to investigating hidden or under-reported aspects of major news stories, or one who has taken such steps to complicate the notoriety surrounding her subjects. (Poitras also had a revelatory recent exhibit at the Whitney Museum, with one installation that attempted to put onlookers in the perspective of interrogators at Guantanamo, and another that sought to investigate her reported inclusion on United States government watch lists.)

The new film is, appropriately, called "Risk," and it's part of Poitras's continuing chronicles of the fallout from 9/11 and the growth of the security state. This time, Poitras is a fly on the wall observing Julian Assange and the inner operations of WikiLeaks. If the movie isn't quite the high-wire act of the previous films—prior to being holed up in the Ecuadorian embassy in London, Assange was not exactly media shy, and some of the film will come as old news who have followed his exploits—it's still alarming to watch these operations unfold in real time, and to see the degree of paranoia and precaution that outfits like WikiLeaks involve.

The film boasts the kind of amazing access we've come to expect from Poitras. In the opening scene, Assange and WikiLeaks' Sarah Harrison attempt to contact the State Department to alert it to an imminent disclosure. (Good luck with that; they were probably dozens of "Julian Assanges" who called each day and asked to speak to Hillary Clinton.) At a panel discussion in Egypt, sometime WikiLeaks associate Jacob Appelbaum confronts representatives of telecommunications companies about possible censorship. Elsewhere, he warns about the growth of "behavioral analytics." Harrison grapples with how to handle a press conference in which she would like to keep the focus on Syria when the questions will obviously turn to the allegations of sexual misconduct against Assange in Sweden. And in the most surreal scene, that noted reporter Lady Gaga interviews Assange in the Ecuadorian embassy.

At a post-film Q&A, Harrison and Appelbaum read a statement to protest what they characterized as an unlawful detention of Assange. "The real split is between journalists who are working to reveal information and journalists who are propagandists," Appelbaum added, a bit later. It may not be quite that simple; the film is opinion journalism with a clear pro-WikiLeaks slant. But once again, there's no question that Poitras's movies reveal things you've never seen or heard before. 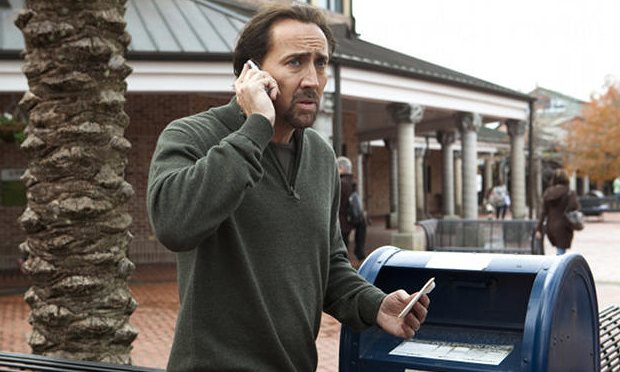 Another work by a major director in the Fortnight—and one that, sadly, turned to be way less vanguard—was Paul Schrader's "Dog Eat Dog," a turgid meta-noir written by Matthew Wilder (like Schrader, a former film critic) that plays like Elmore Leonard's overheated leftovers. It opens with Willem Dafoe, as a drug-addled sociopath, slashing the throat of the woman he's living with and then shooting her daughter, in a scene that I think is meant to be comic. Schrader's grip on the tone remains similarly shaky throughout. Dafoe plays Mad Dog, part of a gang of ex-con buddies that also includes Troy (Nicolas Cage) and Diesel (Christopher Matthew Cook, who has the best role—as a muscle man with brains—and gives a far better performance than his manic co-stars). The three become embroiled in a harebrained kidnapping scheme that's at once antic and tedious, and the body count of innocent bystanders in this movie is too high to write off as somehow essential to the plot, themes or style. Instead, it's merely sadistic.