As the attention of the world is focused on the glamour and star-power of the 70th anniversary Cannes Film Festival, this largest and best-known celebration of cinema is also using its bully pulpit to bring attention to the global question of the immigrant. Vanessa Redgrave’s special documentary presentation “Sea Sorrow,” and competition films “Jupiter’s Moon,” and “Happy End” are joined by the first of today’s two competition premieres, “In the Fade” by German director Fatih Akin, starring Diane Kruger.

Akin, the son of Turkish immigrants, won Best Screenplay at Cannes in 2007 for “The Edge of Heaven.” Setting his films largely in his home base of Hamburg, he is known for incorporating culture clash and the possibility of bridging gaps between ethnic Europeans and immigrants into his fiction.

The timely story of “In the Fade” presents the happily married couple Nuri (Numan Acar), a Turkish immigrant and small-business owner, and Katja (Kruger), a native German, and their six-year-old son Rocco, going about a normal day when the blast of a powerful homemade bomb tears apart Nuri’s storefront, killing him and their child. On her way out just before it happened, Katja had briefly registered the unusual sight of a young woman abandoning a new, unlocked bicycle against the front of the building.

Despite the obvious implication that this explosion set off in the crowded business district of an immigrant neighborhood is a hate crime, police maintain a line of questioning focused on Nuri, who had years before served a sentence for drugs. While a grief-stricken Katja negotiates the outspoken prejudice of her own mother and the newly rejecting attitude of her Turkish in-laws, the chief investigator speculates a range of false scenarios by which Nuri was the cause of his own death as a result of political activism, money laundering or drug dealing.

The core section of “In the Fade” is a courtroom drama that broadcasts many a hint that a superficial interpretation of the trajectory of this trial is not to be trusted. Validating the suspicion that Katja had initially reported to the skeptical police, the people charged are a pair of neo-Nazis with a long history of activism. The wife is the woman Katja had spotted leaving the bicycle. The evidence lines up perfectly. Even the male suspect’s father gives damning testimony against him. It looks like an open-and-shut case. It’s not.

In this script, co-written by Akin and director/actor Hark Bohm (a lawyer by education, and best known for roles in Rainer Werner Fassbinder’s films), the intention is to focus on violence against immigrants, and on the imperfect and capricious quality of justice under law that has sometimes attended crimes of this nature. The film doesn’t always serve their purpose well.

The courtroom sequences are spare but gripping, with especially dynamic performances by the two opposing attorneys (Denis Moschitto & Johannes Krisch). The bookending drama, including the film’s final section in which Katja considers taking matters into her own hands, feels perfunctory, a cautionary exercise rather than a story with heart.

The distinction for bringing the highest body count and the most excessive amount of gore to the competition goes to Scottish director Lynne Ramsay for “You Were Never Really Here,” the very final film in the festival competition to be previewed for the press today, after a long ten days of screenings. She competed in Cannes in 2011 for “We Need to Talk About Kevin,” and had previously won Cannes awards for two short films.

Male directors are often criticized for having a taste for gratuitous violence, but Ramsay gets down with the big boys in proving that blowing heads off can be a genderless pursuit. “You Were Never Really Here” is rumored to have only been finished in the nick of time for the festival, and it feels incomplete, not in terms of technical polish, but as if the concept for the script had not been fully hashed out before shooting began.

Joe (Joaquin Phoenix) is a rough, marginal character who lives with his elderly mother and makes a cash-only living at the kind of odd jobs that involve killing people. A desert-set flashback of a child shooting another child over a candy bar signals that he’s a veteran of Afghanistan. Ramsay periodically adds a child’s counting game on the soundtrack, as well as Joe’s additional flashbacks of being physically abused as little boy. Fast cutting and disorienting shots make him a man with a short attention span and a lot of distracting thoughts on his mind.

His latest job involves tracking down the pre-teen daughter of a state senator, who has been kidnapped by a child sex trafficking ring and is being held in a high-priced brothel. Joe gains access easily, killing everyone on the premises with a ballpein hammer he bought at the hardware store in preparation for the job. He carries the blonde girl Nina (Ekaterina Samsonov) away on his shoulders. It’s not long before the two are stalked, more blood is shed, including Joe’s, and Nina is gone.

As the plot goes deeper into complications involving men in high places, dreamier imagery kicks in, even as the violations become more gruesome and egregious. Joe’s mother becomes one of the victims, and is seen in the aftermath of a particularly stomach-turning death. The film goes all-out poetic and slo-mo for a brief time as he handles her unique body-disposal arrangements.

There’s more to come, involving a nighttime visit to the governor’s opulent historic mansion, and, of course, more thick, glossy red blood. At one point, Joe is asked, “Where do you want to go,” and he replies with a blank look, “I don’t know.” Someone needs to ask Ramsey the same question. 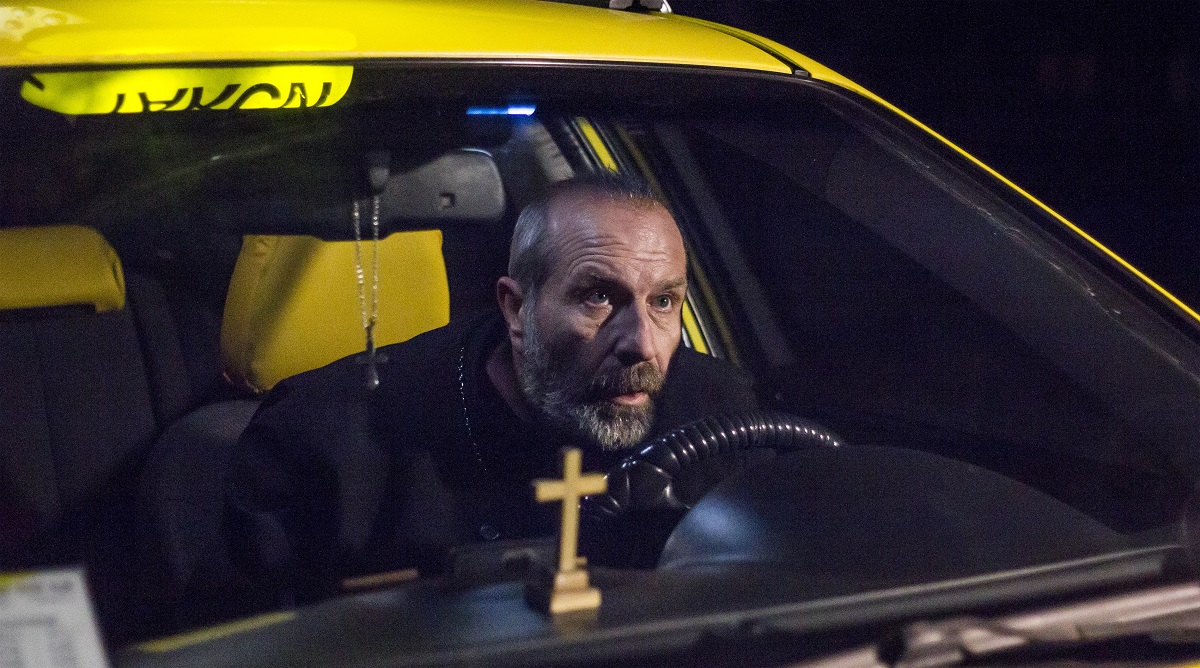 The Un Certain Regard sidebar today premieres “Directions” by Stephen Komadarev (“The Judgment”). In 2010, Komandarev’s “The World Is Big and Salvation Lurks Around the Corner” was the first-ever Bulgarian film to be short-listed for an Oscar.

Set in a series of taxicabs, “Directions” is an episodic film that lets loose with much black humor alongside dark stories of disillusion, betrayal and despair, to draw back the curtain on a nation’s collective howl of pain.

Using the circumstances of a taxi that picks up disparate strangers as the vehicle to transition through a series of stories is not a new idea. Jafar Panahi’s 2015 film “Taxi” comes to mind as just one recent example. The device may not be original to Komandarev, but he brings poignancy and a zesty sense of humor to “Directions,” while exposing the unfunny fallout from a failing economy, political corruption, and mass immigration to greener pastures by those able to manage it.

The murder of a banker who was shaking down a part-time cab driver, the owner of a failing business, is the top news story of the day in the city of Sofia. While the driver lies in an irreversible coma, debates pro and con his action rage on late night talk radio. Every taxi driver in the city is tuned in, and the commentary punctuates the situations that play out as five drivers meet up with fares through the night.

Some of the segments are meant as pure comic relief, like the one in which a businessman’s lie to his wife in a phone call is exposed by a traffic incident and the frisky moves of his companion. Several segments begin humorously then take a sharp turn to expose the deep-seated despair of customers who are out of options in life. A driver spots a man poised to jump from a highway bridge, and pulls up to claim that he received his call for a cab and won’t leave until he gets paid.

In the hardest hitting of these incidents, a middle-aged woman driver picks up a rudely dismissive man at the airport, a wealthy Bulgarian who now lives in Vienna. He doesn’t recognize her but she recognizes him from her university days, when his retaliation in the wake of her sexual rejection of him changed the direction of her life.

A priest by day, taxi driver by night, gets a call to assist a sick man down from his apartment to the taxi. On the way to a fateful meeting that will tie together the film’s larger theme they argue metaphysics. “God already left this country, along with one-third of the population,” retorts the passenger, when the driver urges him to trust in the almighty.