The weather in Cannes can be a bait-and-switch experience, beginning sunny and leaving you stranded in a downpour without an umbrella a couple hours later. Or, like this morning, it can start with the overhead gloom that has characterized the week so far, turn into a Riviera ideal of a day by 10:00 am, and be thundering by 4:00 pm. As coincidence would have it, today’s films are in a shape-shifting transformative mode too.

Korean director Park Chan-wook (“Oldboy,” “Sympathy for Lady Vengeance”) is in competition for the Palme d’Or this year with “The Handmaiden.” He won the Jury Prize for “Thirst” in 2009, and the Grand Prize for “Oldboy” in 2004. He’s in top form with “The Handmaiden,” which is not an adaptation of the Booker Prize-winning lesbian crime novel “Fingersmith” by Sarah Waters, but “inspired by,” a distinction that the film’s press notes carefully makes.

Park transposes the location and time frame of the story from Victorian England to Japanese-occupied Korea in the 1930s. It’s a detail that will likely resonate with Asian audiences but hold little significance in the West, since a political angle is not otherwise pursued. Sookee (Kim Tae Ri), daughter of a working class family of pickpockets and thieves, is employed by the Count (Ha Jung-woo), one of the family’s criminal associates posing as an aristocrat, to assist him in working a con job that is meant to result in stealing a young heiress’ fortune.

Sookee’s new job is to act as lady’s maid to Lady Hideko (Kim Min-hee), raised in the isolation of a country estate by her eccentric uncle Kouzuki (Jo Jin-woong), an obsessive collector of rare books. Sookee’s real purpose is to gain the confidence of her shy, beautiful mistress, and to urge her toward rapid marriage with the Count, who plans to commit her for life to an asylum as soon as the marriage is consummated and he gains control of her money.

Park takes the bare facts of a portion of the novel’s story and recasts it according to his own obsessions. In the uncle’s mansion, where the women wear traditional dress, any sense of the era is lost in a timeless cocoon of old world luxury. Park’s choice of widescreen complements his tendency to pack every part of the frame with eye-popping beauty. Contrary to plan, the two women fall in love with each other, and it all seems like an opulent romantic fairy tale with a hint of an ominous edge suggested by sliding screens, closed doors, and the formidable mechanical gate to the uncle’s paneled library.

Following the structure of the novel, the film is divided into three parts. Part one is from the perspective of Sookee.  Part two begins as a partial retelling of earlier events from Lady Hideko’s perspective, along with a series of flashbacks of her early life. The deceptively shy, virginal Hideko is not so innocent after all, raised from childhood by her perverse uncle to assist him in his vast library of pornography. Uncle Kouzuki regularly holds exclusive gatherings of wealthy gentlemen to enjoy dramatic readings by the now-grown up Hideko from these rare texts.

It is at one of these events that the scheming Count first meets his intended quarry. The two team up with the intention that Hideko will escape from her uncle’s grasp by creating an elaborate ruse through which she and the Count will elope and marry, and a naive young maid will be tricked into assuming Hideko’s identity, in order to be committed to an insane asylum in her place.

While Waters’ novel was less about sexual identity than about illusions and deceptions surrounding the question of personal identity, Park’s narrative is most definitely about power, money and especially sex. There’s no doubt that he brings the eye of a voyeur to this film’s explicit, gorgeously composed and photographed scenes of the two women in bed, and you would not call it a feminist perspective. On the other hand, Park unequivocally brings the eye of a voyeur, as well as the eye of an off-the-wall artist to every aspect of his work. That’s what makes it so much fun. 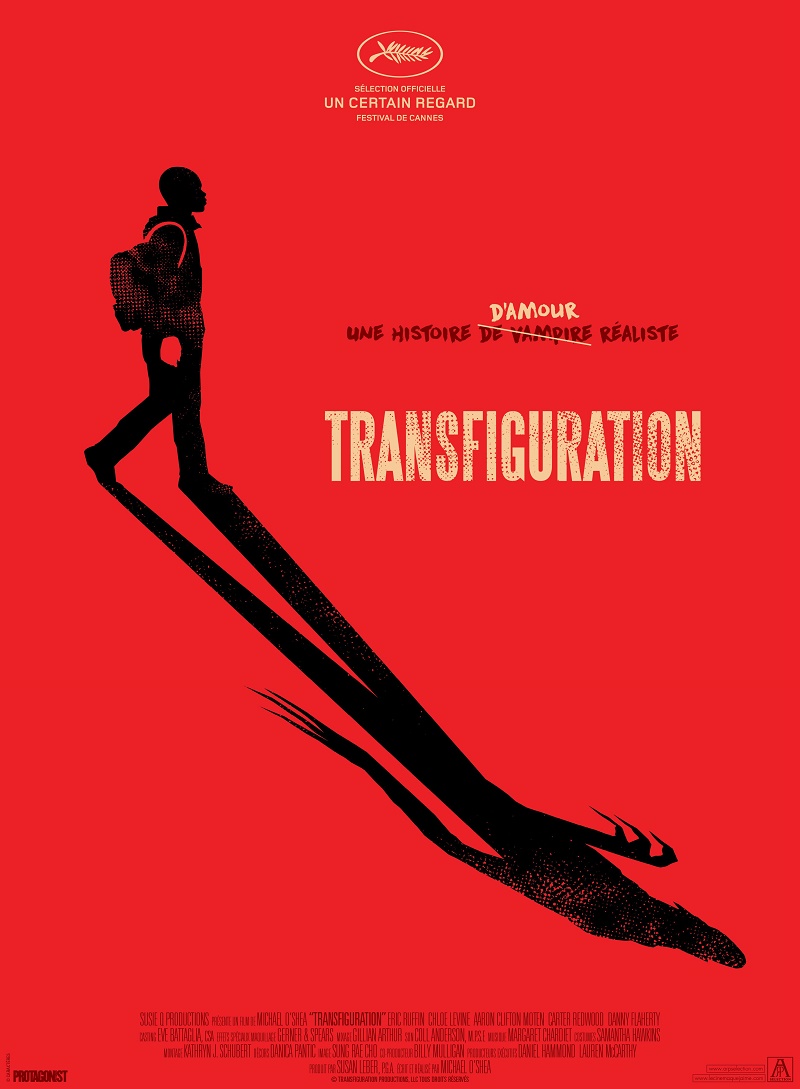 Premiering today in Un Certain Regard, “The Transfiguration” is an American independent film that struggles mightily to bring something new to the vampire genre, but doesn’t quite make it.  This first film by Michael O’Shea is competing for the festival’s Camera d’Or, an award for first or second feature. Past Camera d’Or winners who went on to international fame have included Jim Jarmusch, Jafar Panahi and Naomi Kawase.

As long as a vampire film involves a depiction of victims being stalked and having their blood sucked, there’s not much that can be done to change the basic setup except to dress it up or dress it down. “The Transfiguration” dresses it down, with a drama centering on Milo (Eric Ruffin), a 14-year-old African American boy living in a Queens, New York, public-housing unit with his older brother. There’s no clue as to how he became a vampire, and he’s still finding his way concerning the rules and etiquette of the bloodsucker’s life by watching movies and nature videos of predatory animals.

Realism seems intended to be this film’s ace in the hole, but the grimness of the setting and the elements of poverty, petty crime and gang activity only serve to underline the story’s flatness. In his building, Leo meets Sophie (Chloe Levine), an orphan like himself, and she becomes his only friend. By way of novelty, the film poses the question of whether a vampire can die if he wants to, and connects it to Leo’s newfound impulse to give Sophie a future. It involves a transformation, but not one that makes the audience care. 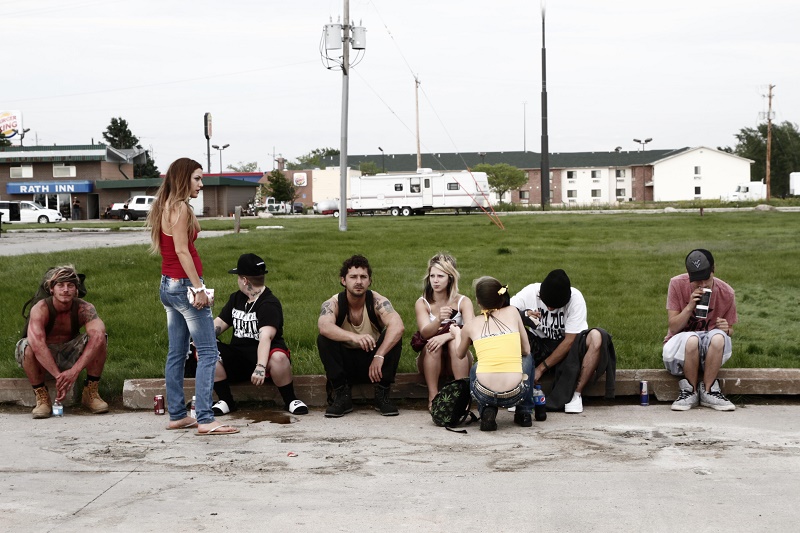 British director Andrea Arnold has won the Cannes Jury Prize twice, in 2009 for “Fish Tank,” and in 2006 for “Red Road.” She won an Oscar in 2005 for her short film “Wasp.” She is here in competition for the third time with “American Honey,” a road movie that moves across nine states in the American Midwest, from North Dakota to Oklahoma. It’s also a coming-of-age movie, and, by default, an alternative musical.

“American Honey” features an almost non-stop music track, a highly stylized approach to realism, and a deeply romantic view of the heartland. Sorry to say, this view is reminiscent in spirit of many other deeply romantic appreciations of the rural underbelly of the U.S., a part of the world long fascinating to European filmmakers.

The film ventures into "People of Walmart" territory with the story of Star (first-time actress Sasha Lane), a teen who impulsively runs away from an abusive family to join a ragtag, cult-like band of youthful door-to-door magazine subscription peddlers. Jake (Shia LaBeouf), the group’s best salesman and a flirt who’s catnip to women, recruits her. She's then sized up by his tough-talking boss, Krystal (Riley Keough). A powerful attraction between Jake and Star is evident from early on, but Star is warned that Jake is “Krystal’s bitch.”

Arnold shoots the film in the 1:1.37 aspect ratio, which makes for an almost square frame. Working with a large cast, most of them squeezed into one van for lengthy road sequences, this method of shooting creates a screen tension deliberately at odds with the wideness of the landscape, and offers a close but not always safe intimacy in more targeted encounters.

A sense of narrative is something that comes and goes in small increments. The film is a larger visual and aural tapestry of road sensations and group interactions to a long playlist of rap, trap music and ballads, as this itinerant group of young outcasts, runaways and misfits form their own rough facsimile of a family. They work what is essentially a scam in various locations ranging from ritzy suburban neighborhoods to dirt-poor communities.

“American Honey” increasingly drips with sun-dappled romanticism, twinkling oil field lights and fireworks. The too-much factor came for me near the end when Star, again attempting to clinch a promising sale at a truck stop, jumps in a big rig with a middle-aged driver, and the two begin to sing along with Bruce Springsteen’s “Dream Baby Dream.” “What’s your dream?” the driver asks her. “Nobody ever asked me that before,” Star replies. I don’t know about her, but my dream was for “American Honey” to be over.