When the Cannes audience hates a movie, you know it hated it: boos are loud and clear, and a wave of derision all but sweeps a picture off the screen. Same goes for Cannes love, which usually explodes in joyful thunders and may be a good indicator of a movie becoming an art house hit (I’m looking at you, “Mountains May Depart”).

However, there are films here that provoke a perfect mixture of both elements, with cheers and boos entangled so closely as to confuse a casual observer and seasoned festival goer alike. It was precisely a mixed reaction like that that capped today’s morning screening of Paolo Sorrentino’s “Youth”, the first film the Italian director finished after his much-praised, Oscar-winning “The Great Beauty”. As fond as I am of the film, I think it may meet a similarly contradictory response once it gets released: it’s an uneven work, which requires attuning oneself to its quirky rhythms and not minding an occasional misstep.

“Youth” has been very much anticipated in Cannes, since its unfortunate poster has become the butt of many a joke among members of the press (the image suggests a coarse dirty-old-man comedy, starring Michael Caine and Harvey Keitel as two old wolves lusting over crudely objectified female flesh). In a way, the film is not that far from what the poster implies it to be, but Sorrentino gives the material a personal spin all his own, and, at the end of the day, “Youth” operates on so many levels of sophisticated irony, it may require repeated viewings to fully appreciate it.

Caine and Keitel play acclaimed artists in their respective fields—the former is a composer, the latter a film director—on retreat in a palatial Swiss spa that suggests Wes Andreson’s “The Grand Budapest Hotel” as much as the setting for Thomas Mann’s “The Magic Mountain.” 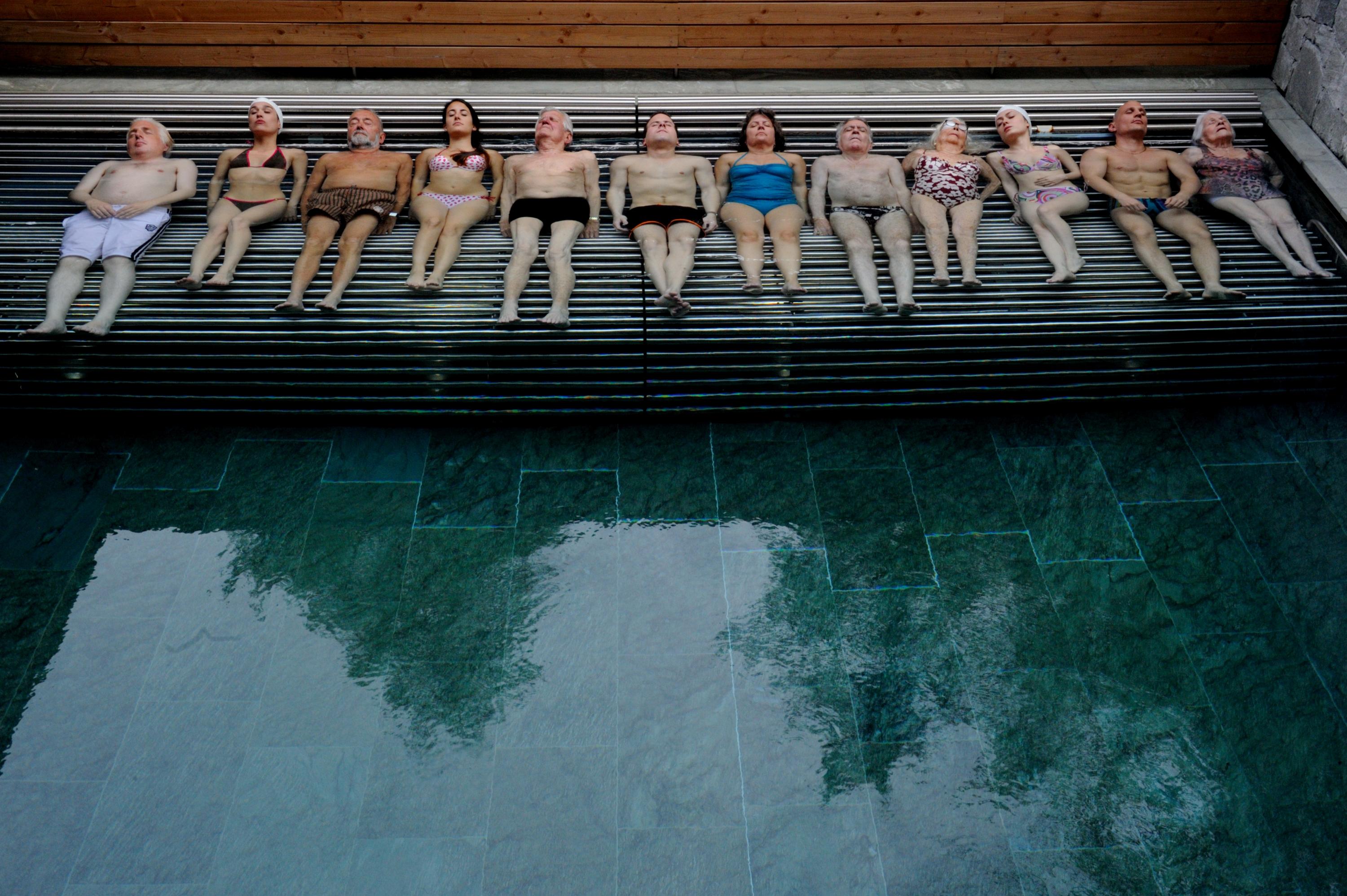 The two men enjoy many a scenic stroll as they ruminate on the nature of art, sex and aging, even as each remains involved in ongoing dramas all their own, both creative and personal.

While Caine is bullied into considering a return to conducting a piece he wrote and would rather not touch again, Keitel is struggling to finish a new script, all the while hoping to get one of his former leading ladies (played, in a regal turn, by Jane Fonda) to play the role conceived for her. As if that wasn’t enough, Caine’s daughter (Rachel Weisz) gets dumped by her husband (Keitel’s son) for a younger woman, whose clear advantage over her is described by the philandering husband rather bluntly as “being good in bed”.

Just like in “The Great Beauty,” Sorrentino’s main concern here is with Western culture’s latent self-absorption: no matter how luscious the Alpine setting, the film is steeped in a sense of running on empty and hitting a dead end that even the most audacious jokes cannot shake off. Commercialization of art seems omnipresent and deflation of cultural signifiers is mourned, most memorably in a vicious parody of a music video, inserted mid-movie as Weisz’s character’s nightmare. At the same time, Sorrentino goes a long way to prove that his two protagonists’ creative juices are still flowing in their veins: Keitel experiences a vision of all his female characters greeting him on a vast green field (a shot more than a little indebted in Fellini), whereas Caine conducts imaginary cowbell symphonies by raising his hand over a pasture filled with grazing cattle.

In a way, the film feels like a continuation of a current trend of movies featuring sixty- and seventy-something stars reasserting their creative potential and high spirits (films as different as “Quartet,” “The Expendables” franchise and “The Best Exotic Marigold Hotel” are part of the same wave). However, Sorrentino’s bold imagination results in images of such lyrical power, and his humane sympathy towards his characters is so enveloping, the film radiates a kind of serenity in the face of death that most of the inspirational fare simply doesn’t have.

“Youth” is at once intimate and overblown, filled with ideas bad enough to make your teeth hurt and great enough to make you spring up from your chair and applaud. Rachel Weisz gets to deliver an angry neglected-child-of-an-artist monologue that seems (lazily) cribbed from Ingmar Bergman’s “Autumn Sonata,” and is rather embarrassing in itself, but the actress’ craft and the director’s conviction really make it work. The same thing happens over and over in the film: many scenes that at first seem like they’re recycled suddenly are capped by an unexpected touch that transforms them into something else: Paul Dano’s character chides his female fan (a Miss Universe, no less) for only liking the dumb Hollywood fare he acts in, but in the end the tables are turned and the scene proves to be about his insecurity and presumptuousness, not the woman’s alleged superficiality.

All of Sorrentino’s formal flamboyance notwithstanding, the film is in fact a gentle lullaby for a secular world fearing mortality and seeking redemption in art. “Youth” clearly operates in a post-religious setting, and yet it focuses on characters trying to capture beauty that would prove immortal. The film’s irony is that the means suitable for that very mission are all fleeting and transient, as are our lives, and as is the titular quality, seen by Sorrentino as the greatest miracle of all.

The Films of Cocaine Noir