Art of the Real at the Lincoln Film Center

The Film Society of Lincoln Center’s “Art of the Real” series isn’t an LGBT film festival - it claims to offer the most expansive view and definition possible of the documentary field - but this year’s installment, which runs from April 10th to the 26th, includes a wealth of work by gay and lesbian directors (Joao Pedro Rodrigues, Jenni Olson, Mark Rappaport, the late Derek Jarman, Edgardo Cozarinsky) and films about gay and transgender people. The Film Society's annual LGBT festival has a tendency to play to self-segregated audiences; last year, I saw Bruce LaBruce’s “Gerontophilia” there to a packed house that included about five women (but more elderly gay men than I’d ever seen in one place.) Pundits keep telling us that this kind of ghettoization is behind the LGBT community, especially in cities like New York. At the same time, The New Yorker struck a chord with an article on the HBO show “Looking” that proposed it addressed a “New Gay Sadness.” That melancholy flutters through several films at “Art of the Real,” especially ones which combine documentary and fiction. At a time when the price of mainstream visibility, especially for gay men, seems to be trumpeting gay identity but closeting sex itself, the documentary impulse showcased in “Art of the Real” remains important. 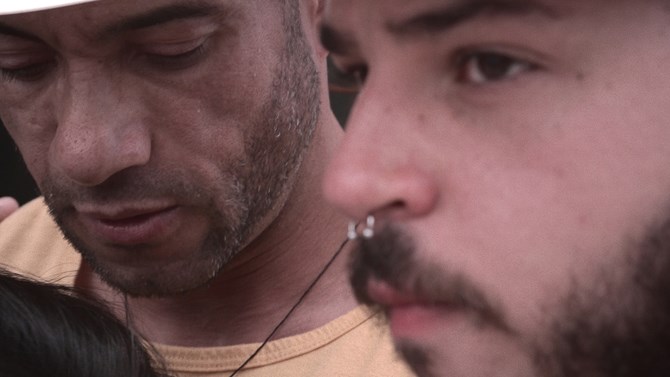 Brazilian director Gustavo Vinagre’s “Nova Dubai” comes as close to porn as mainstream documentary form. It’s often been observed that gay men are the shock troops of gentrification, moving into downtrodden urban communities and raising property values and rent. “Nova Dubai” turns this on its head; it shows a group of young gay men appropriating construction sites for buildings they can’t afford as spaces for sex. From the very beginning, Vinagre gets quite explicit, even hardcore, and the fantasies he shows are often politically incorrect. However, his interviews with the performers are sobering - the “daddy’ in an incest scene talks about being raped by teenagers when he was 10. The darkest sex scene involves a real estate agent, which is obviously no accident. The punk attitude suggests New Queer Cinema and the queercore scene, although Vinagre’s production values are higher. A rebellious spirit underpins the film, but there’s also a real weariness to it. For most of its brief 50 minutes, it seems to lack focus and get lost in flaky digressions like the one about a guy who loves retelling the plots of horror movies; however, it’s willing to embrace youthful nihilism while yearning for something beyond a life of sex in construction sites. The not-quite-360-degree pan from concrete to nature that closes the film makes this clear.

Nicolas Videla and Camila José Donoso’s “Naomi Campbel” is a character study of Yermén, a Chilean transgender woman. While it includes performances by actors (including an actress playing the title character, a stripper who wants to get plastic surgery to look just like Naomi Campbell), it also incorporates real, extremely grainy video footage shot by Yermén as she walks around her neighborhood in Santiago. While no one attacks her, she feels a constant threat from men and dogs. “Naomi Campbel” mixes documentary and fiction seamlessly. In the main narrative thread, Yermén works at a psychic tarot card hotline and applies to compete on a reality show that may offer her the chance to get free gender reassignment surgery. She’s frustrated with her current in-between state, reflected in the title’s refusal to give her friend the full identity of her alter ego, but is a deeply spiritual woman, whose faith synthesizes Catholicism, tarot and indigenous religions. The directors avoid the usual pitfalls of depicting transgender women. Yermén may be troubled, but she’s not a stereotypical “tragic transsexual” a la Jared Leto’s character in “Dallas Buyers Club.” As the Film Society of Lincoln Center’s program notes suggest, the film’s hybrid nature comes close to “an imaginative embodiment of the trans-ness it celebrates.” Even if Yermén’s problems continue after the film ends, it closes on an affirmative note. 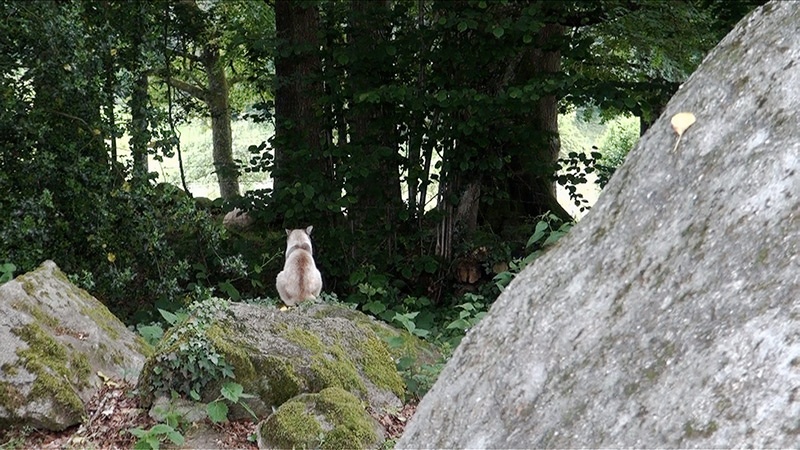 French director Alain Cavalier has been making diary films on home video, with meager means, for the past twenty years. “Le Paradis” departs from this cycle, but it owes something to what he learned from those films. The filmmaker is now 83, so mortality is clearly on his mind, but he approaches the subject indirectly, through images of animals and toys. “Le Paradis” starts off as a documentary, with Cavalier discovering a dead peacock and burying it, then trying to get the rust out of a bunch of nails with Coca-Cola. It quickly turns into something more akin to late Godard. Cavalier focuses on long takes of objects, while he fills the soundtrack with quotes from the Bible, Greek mythology and Homer. Many of these dance around the subject of death. Filled with images of crosses, the film is spiritually minded in a way that can’t be easily pinned down. A toy robot becomes a kind of protagonist. “Le Paradis” is a lesson in how stripped-down cinema can get and still retain complexity and substance. While more accessible than recent Godard, it remains challenging. Pixar aside, who would think that the image of a robot and duck lying down on a black background could be so moving?

Argentine director Edgardo Cozarinsky’s “Letter to a Father” does not address his sexuality, but it’s a deeply personal film in all other respects. Beginning with a dream in which Cozarinsky travels to Entre Rios, the birthplace of his father but a town which he has never visited, it pursues an investigation into the roots of his family. Cozarinsky’s grandparents were Russian immigrants who became “Jewish gauchos,” as he describes them, on the plains of rural Argentina. His father led a more cosmopolitan existence as a naval officer before  dying when Edgardo was 20. While “Letter to a Father” is a more conventional documentary than many of the films in “Art of the Real,” it follows a distinct path. Cozarinsky relies on family photos and beautifully shot present-day images of the Argentine countryside. Interviews are few and far between, and they’re often audio-only. Cozarinsky doesn’t even show his own face very often. Going back and forth between the past and present, “Letter to a Father” manages to say a lot about 20th-century Jewish history. In some respects, its tale of immigration and assimilation will be familiar to Jewish-American spectators; in others, it shows how Argentina pursued a different path, one that at times openly embraced anti-Semitism and Nazis. (Cozarinsky shows a 2013 tax form urging taxpayers to “kill Jews.”) “Letter to a Father” could be a fictional counterpart to James Gray’s “The Immigrant.”

It’s a puzzle how a film as finely crafted as Jenni Olson’s “The Royal Road,” “Art of the Real”’s closing night entry, could wind up being so unsatisfying. Olson combines shots of San Francisco street scenes and highways, all taken from a static camera, with a voice-over that rambles through her cinephilia, nostalgic taste for a rapidly changing city, and her unrequited desires for other women. Alfred Hitchcock’s “Vertigo” looms large over the whole project. The problem is that the images, while attractive, are often completely removed from Olson’s voice-over. When they come together, as in a brief section called “In Defense of Nostalgia,” the film works. Much of the time, the editing seems poorly paced, imitative of James Benning’s landscape films without his grasp of rhythm and duration. Olson’s voice-over is also too dry for such personal material, especially in the first section, which recounts a trip she took to Los Angeles to visit a woman with whom she was in love. Her detailing of California’s colonial history as “New Spain” is politically admirable but crushingly dull, playing like a PowerPoint presentation down to the amateurish computer graphics. Still, Olson’s honesty about her desire - and her difficulty satisfying it - is refreshing, even if it doesn’t always makes for worthwhile cinema. Even at its weakest, “Art of the Real” suggests how documentaries and their incorporation of first-person perspective can pave a path forward for queer voices.