Another much-anticipated film by one of the big names in this year's Cannes competition premiered this morning -- "Melancholia" by Lars Von Trier. It's no secret that this apocalyptic science fiction drama ends with the destruction of the earth, since that is revealed in the first few minutes of the film. The character played by Charlotte Gainsbourg, neatly summarizes Von Trier's dark pessimism with the line, "The earth is evil; we don't need to mourn for it." What is rather amazing is that a film about the destruction of all life (and von Trier posits that we are alone in the universe) could be so turgid.

That said, I think I rather prefer Von Trier's wacko view of the cosmos in "Melancholia" to Terrence Malick's in "The Tree of Life." With the ingredients von Trier had to work with, it's surprising that he didn't make a better film. Following the various forms of desecration and transgression that are the hallmarks of "Antichrist," it's as if he felt the need to top himself with an even more outrageous concept, but forgot to figure out what the outrageous part would be.

"Melancholia" examines the relationship of two sisters, Justine (Kirsten Dunst) and Claire (Charlotte Gainsbourg) in the final days before the planet named Melancholia is due to collide with the earth. The story falls into two parts. The first is named for Justine, who is blonde, conventionally pretty, and mentally unstable. The second is named for Claire, who is Justine's opposite in every way, not only in her lean, dark-haired appearance, but in her down-to-earth competence in managing the stuff of life.

Von Trier presents his vision of the last moments of human life in a poetic nutshell in his prologue. This includes some of the most beautiful slow-motion sequences I've ever seen. The film's very first image is a close-up of Dunst's immobile face as a profusion of birds fall from the sky in slow-motion behind her. The finale of the prologue depicts the collision of the planets. The tiny earth is absorbed violently into larger Melancholia as if it were a spermatozoa penetrating an egg.

The first section of the film is set during at the lavish wedding reception of Justine, who has just married Michael. The event is hosted at the palatial mansion of Claire and her wealthy husband John. Justine seems blissfully happy at first, but the event soon deteriorates, along with her mental state. There are funny, crude, and/or loopy characterizations by Charlotte Rampling as the divorced mother of the sisters, Stellan Skarsgard as Justine's boss, and Udo Kier as "the most expensive wedding planner on the planet." 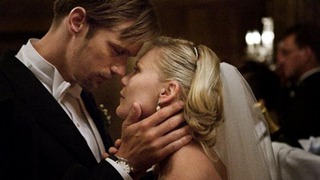 It must be mentioned that Von Trier's fellow Dane Thomas Vinterberg did a bitingly satirical rendition of the family party gone wrong in his 1998 "The Celebration." Comparisons are inevitable, and not necessarily in Von Trier's favor. Part one is very much like a separate film, barely related to part two. In the course of the wedding reception, the impending disaster is only a nagging worry for Claire, who has followed scientific predictions online, although John, an amateur astronomer, imperiously dismisses the doomsday scenario.

Part two follows chronologically, and Melancholia is now an enormous sphere that rises nightly on the horizon, dwarfing the terrace and formal gardens of Claire's home. Justine managed to shed both husband and boss for good on her wedding night, and has joined Claire, John, and their young son as a morose guest. Von Trier contrasts his stately and ominous shots of the approaching planet with the intimacy of the hand-held camerawork with which he depicts the human drama.

As the planet approaches and panic rises, Justine becomes the competent one, taking strength from her hard-edged pessimism, while Claire starts to fall apart, wallowing in sentimentality. The end is indeed the end, as predicted.

In a statement in the press notes, Von Trier mentions being influenced by German Romanticism, and states with mock horror that he has made a woman's film, which he dismisses as "cream." Straining to retain his maverick crown, he says: "I cling to the hope that there may be a bone splinter amid all the cream that may, after all, crack a fragile tooth... I close my eyes and hope!"

Two films by young directors premiered in Un Certain Regard today: "Oslo, August 31" by Joachim Trier (son of Lars Von Trier), and "Loverboy" by Catalin Mitulescu. In each case, by choosing to tell stories that have been told many times before, neither off these directors quite lived up to his potential this time around..

"Oslo, August 31st" is a junkie relapse story, and no matter how that story is dressed up in new clothes, it's always going to begin with a clean start and end with a needle in somebody's arm. I like the way the film opened with a home movie-like montage of Oslo scenes while a variety of voices describe favorite things about the city. This list-making strategy is one that Trier returns to later in the film for more impactful underlining, notably when his main character Anders eavesdrops on the conversations of other patrons in a coffee shop, and when he recites the things he remembers about his father. 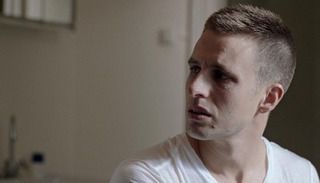 Anders is allowed out of his drug rehab facility on day leave to have a job interview. With every encounter, from the interview itself to the successive meetings with old friends, the impossibility of leaving his notorious past behind becomes more evident. I felt like the lead actor Anders Danielsen Lie (who is very good) didn't have free reign to make the story jell until the midpoint of the film. Trier has a unique way of advancing the plot through conversations that comment on each other, but again, this took some time to work. I don't doubt he's a director to keep an eye on in the future.

The Romanian cinema has been having an impact at Cannes for some years now, and the award of the Palme d'Or in 2007 to Cristian Mungiu's "4 Months, 3 Weeks and 2 Days" was a turning point. "Loverboy" is the only Romanian film in the official selection this year. Director Mitulescu made a sensational feature debut in 2006 with the whimsical comedy/drama "How I Spent the End of the World." 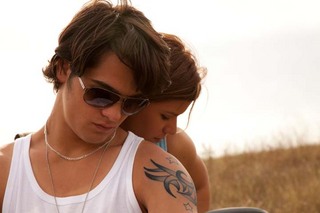 "Loverboy" is a heavily researched realistic drama about a young guy who recruits women to sell to sex-slavers. With his dark wavy hair, enigmatic smile, and ripped physique, Luca doesn't have a problem getting girls to like him; in fact, they throw themselves at him. One day, one of his routine conquests becomes a girl he falls for. He's ready to call the old life quits, but she's ready and willing to become a prostitute in order to pay his debts. In fact, she appears to really get off on the idea of becoming a prostitute to support her man.

Mitulescu, also, is a director to watch in the future. I know from the press notes that he was eager to make a powerful social statement with "Loverboy" and had spent long hours getting to know just such men and their women in backwater Danube ports. Unfortunately, it's the kind of story that has been told so many times that it's almost a sub-genre. The trajectory of these two lives is quite predictable from the start. The film is well made and the milieu is painstakingly created, but there doesn't seem to be anything new here.

My day ended with the premiere of "Hara Kiri: Death of a Samurai" by Takeshi Miike ("Audition," "Ichi the Killer"). It's the first 3-D film ever selected for the Cannes competition, and I had been looking forward to it, but not to the 3-D aspect. 3-D is one of my pet peeves because I find it's hardly ever used effectively, and it's uncomfortable to watch. The glasses provided were presumably state of the art, but they're so clunky that I often took them off and put up with the lack of 3-D for minutes at a time. As it turns out, it often didn't make much difference. 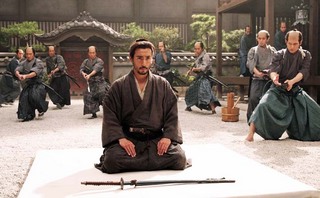 "Hara Kiri" is a relatively low-key samurai film set in the 1600s, about an aging and impoverished samurai who undertakes a unique revenge for the unjust death of his son-in-law. A great part of it involves a story told in flashback, and that story within a story is almost a chamber drama taking place in the main room of a small house, and another great part involves dialogue around the finer points of samurai honor.

Here's where my 3-D irritations kick in. There's nothing about this drama that is naturally enhanced by 3-D, but tree trunks, pillars, large rocks, or actors' backs are often placed in the foreground of a shot specifically to emphasize the effect. Looks like cheap tricks to me, and bad composition to boot.