Farming is not an easy life. My mother's family comes from farming background and, in San Diego, water and sudden shifts of the weather are big concerns, but farming is harder still in areas that have a real winter. Two films look at the plight of small farmers, one in the United States, "Bob and the Trees," and another in Iceland, "Rams." In each, the farmers aren't singing the praises of a white winter, but struggling against its constraints as they deal with other economic problems.

In Diego Ongaro's "Bob and the Trees," we have a real Bob, Bob Tarasuk, who is a real forester, playing a logger going through some hard times in rural Massachusetts. You can't get more authenticity than that. Bob tends to his hogs and cows. They still need to be fed and kept warm. Bob has a supportive wife, Polly (Polly MacIntyre). During the winter Polly has her sewing circle, but the fifty-something Bob makes money by logging.

Bob buys a parcel of logging land owned by Nat Leiland (Nathaniel Gregory) from a colleague (Winthrop Barrett, also a real tree man), but he finds that the trees are rotten and filled with ants. He suspects that he has been cheated, but at the same time, his favorite cow has a mysterious gash on its neck and he suspects someone has maliciously targeted his animal. His son and partner in the logging operation, Matt (Matt Gallagher), is against the Leiland job and initially Matt and Polly don't know that Bob (Bob Tarasuk is Matt Gallagher's real father-in-law) has withdrawn $25,000 from various accounts to pay for the job. Matt and Polly become more concerned with Matt's growing paranoia in his quiet and doggedly isolated desperation. 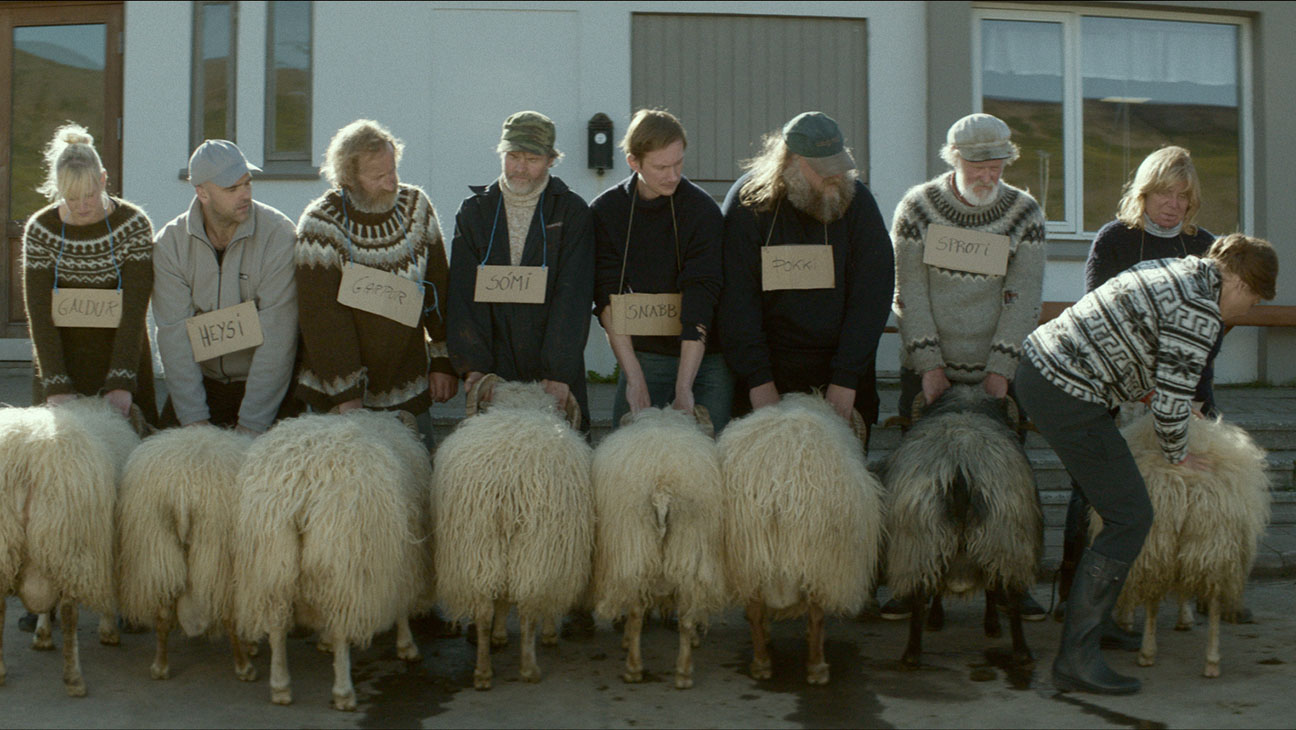 Family ties and disease are also the topic of "Rams." I initially chose this film because this is the Year of the Sheep. Written and directed by Grímur Hákonarson, "Rams" is about two brothers: Gummi (Sigurður Sigurjónsson) and Kiddi (Theodór Júlíusson). The two live side-by-side or at least with houses in sight of each other, confirmed sixty-something bearded bachelors. They both raise sheep and are the valley's top competitors in the annual ram competition judged by the local vet Katrin (Charlotte Bøving). Kiddi comes in first with 86.5 points and Gummi comes in first with 86.

Gummi notices what he believes are signs of scrapie in Kiddi's winning ram. He hastily leaves, hauling away his own ram. All the rams from the competition had been penned together during the modest award ceremony and reception. At home, Gummi puts his ram in his own bathtub and scrubs him down, but eventually Gummi reveals his suspicions to the health authorities. The vet comes for Kiddi's ram.

Before the tests are back, we suddenly understand why Gummi refused to speak with Kiddi for over 40 years: Kiddi bellows outside of Gummi's house at night and uses his shotgun to take out two windows. Gummi retreats down to his basement to sleep. Gummi repairs the windows, but doesn't complain to a fellow farmer about his brother's actions. He does, however, write Kiddi an invoice for the damage and summon their border collie, to deliver the missive to Kiddi. When the test results are back, the news is heartbreaking and all of the sheep herds in the valley must be tested. Gummi and Kiddi face the crisis differently and must eventually take care of each other.

Scrapie is a fatal, incurable degenerative disease that affects sheep and goats. It is a transmissible spongiform encephalopathy and is related to the more infamous mad cow disease (bovine spongiform encephalopathy) and the chronic wasting disease in deer. It has been suggested that scrapie in sheep might also infect humans, resulting in the human version, Creuzfeldt Jakob Disease. Some scientists have theorized that there was a link between scrapie and mad cow disease and thus the BSE scare in Great Britain during the 1990s.

Undoubtedly, for people in Europe, particularly in Great Britain—another island economy, the repercussions are clearer and the memories of the U.K. crisis are more deeply etched.

Both "Rams" and "Bob and the Trees" are quiet, solemn studies of men in crisis and should destroy any romantic notions of farming, but both look at family as one's saving grace.