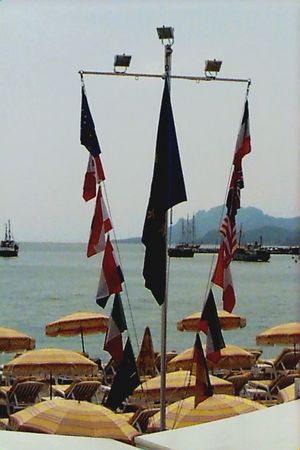 The most gutsy, powerful film I've seen here so far is without doubt "Precious" by African-American director Lee Daniels. "Precious" already had its world premiere at Sundance in February, where it was greatly acclaimed by audiences and critics alike. If the comments I've heard today are any indication, it promises to be an even bigger success in Cannes.

Based on the novel Push, by Sapphire, "Precious" is the story of a Harlem teenager who is severely abused by her mother, habitually raped and twice impregnated by her father, and treated like garbage by just about everyone in her life. The one thing Precious's abusers don't succeed in killing is her imagination, and for instance, while being raped, in her mind's eye she sees herself making a grand entrance at a film premiere. The pictures in her photo album talk to her, and this large, awkward girl looks in the mirror and sees a beauty queen with cascading blonde hair. This is not a preachy film, but one that grabs you from beginning to end as Precious comes back from the edge of desolation to discover the immovable force of her own willpower.

After seeing "Precious" last night at an invitational press screening, this afternoon I attended the press roundtable interview event with director Lee Daniels, screenwriter Damien Paul, and actors Gabourey Sidibe, Mariah Carrey, Lenny Kravitz, and Paula Patton. It was held at the outdoor restaurant Beach VitaminWater, which I can't say without laughing. Typical of these events, a lavish lunch is served, and the talent is brought in.

Additional rain threatened, and Beach VitaminWater's decibel level was even more threatening to an interview event. It's in these peculiar Cannes circumstances that it's necessary to have devices to do the work for you. Most of us lined up our digital voice recorders on the interview table and hoped for the best. Mariah Carey was sitting about ten feet away from me and I couldn't hear her voice well enough to take notes. Lead actress Sidibe was about fifteen feet away, and I never heard a word she said.

Fortunately my trusty voice recorder heard it all. According to director Daniels, who still can't seem to believe the way his film is shooting to the top, "This is a little movie. I'm waiting for somebody to tell me, you are not in Cannes, you're in Kansas!" 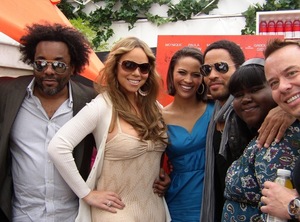 At the "Precious" beach party (l-r): director Lee Daniels, actress Mariah Carey, actress Paula Patton, writer Lenny Kravitz, actress Gabourey Sidibe, and some clown who shoved himself into every group photo with his free bottle of Vitamin Water in his hand. (Barbara Scharres)

Mariah Carey, resplendent in a revealing wheat-colored sundress, spoke at length about her engagement with a role in which she is virtually unrecognizable as a school counselor who tries to help Precious: "I said, let me just peel layers away of who the world thinks I am, or even who I think I am as a performer, as anything, and really, truly become this woman who has a large responsibility. In a way, she is the audience, that shocked person who hears about what goes on and has to bare her soul because she's hearing something that is so horrific, that she's never heard before. I think a lot of people feel that way when they see this movie."

Gabourey Sidibe, who plays Precious moving intensity, said, "I'm actually from Harlem. I wasn't an actress, I was a college psych student. I never thought of acting as a career; I just did it for fun." Her mom encouraged her to try out for the role of Precious, but it wasn't until a friend alerted her to auditions in progress that she decided to do it. "I didn't really want to go, and did the audition on autopilot, she says, "I got it [the role] two days later, and now I'm a movie star!" 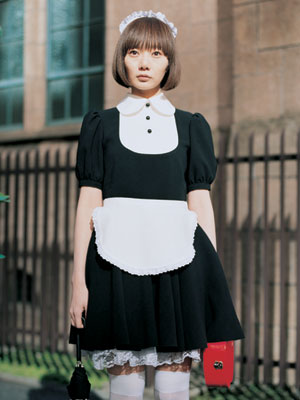 The weather luck here has run out already. Friday morning it was raining the kind of torrential, death-to-all-footwear kind of downpour that makes getting around misery. Women pack sandals and stilettos for Cannes, not Wellington boots, so heading out at 8:00 am for the press screening of Jane Campion's "Bright Star" meant resigning myself to wet feet for the rest of the day. But I'm getting ahead of myself.

Yesterday was a five-movie day, three of them over two hours each. The day's total running time: 597 minutes, or 9 hours and 57 minutes. Three of the films were on my must-see Asian list: Bahman Ghobadi's "No One Knows About Persian Cats" from Iran, Hirokazu Kore-Eda's "Air Doll" from Japan, and Park Chan-wook's "Thirst" from Korea.

Ghobadi's past films including "A Time For Drunken Horses" and "Half Moon," have gone into U.S. distribution and are admired for their timeless folkloric qualities and Kurdish themes. With "No One Knows about the Persian Cats" he develops a contemporary story of two young musicians, a man and a woman, attempting to get the money and the counterfeit visas that will get their rock band out of Iran. It's also in part a documentary on Tehran's underground music scene.

It's quickly made clear that rock and rap music are banned in Iran and electronic instruments are forbidden. Women are forbidden to sing in public. It's even forbidden to keep a dog as a pet. All these religiously-based dictates figure into the story, which incorporates a large number of performances by actual bands and solo performers, ranging from hard metal numbers to bluesy ballads to a fusion of traditional music with rock. Doleful lyrics like "Dreaming is My Reality" and "God, Wake Up, I've Got Something to Say" take us to a place beyond the script, and Ghobadi fashions these sequences into music videos within the film, each one packed with the kind of beautiful but terrible urban images not likely to promote tourism. 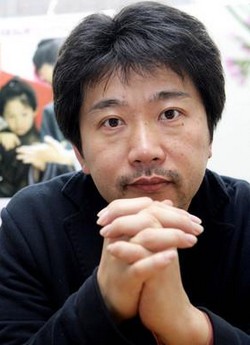 "No One Knows about the Persian Cats" represents a new direction in filmmaking for Ghobadi, but is also a politically risky project that will probably have an impact his career. Due to the content, the film will never likely be seen anywhere legally in Iran, although it is sure to be seen everywhere as a bootleg.

The doll puts on what appears to be her owner's favorite among the many outfits he's provided for her: a French-maid outfit with short skirt, ruffled white petticoat, and thigh-high white stockings. She goes out into the world to explore, and at first her movements are stiff and robot-like, her knowledge of how to behave minimal. She learns to act like a human, discovers she can cover the seams that run down her neck and limbs with make-up, and even gets a job as a clerk in a video store. All the while she is learning about the emptiness that makes the genuine humans not so different from her inside.

Kore-eda grants the doll, manufactured solely as an object to be used, purity and innocence, yet his other characters, even the users, are treated with great compassion. Like much of the director's other work including "After Life" and "Nobody Knows", "Air Doll" explores loneliness, what it means to be human, and what it means to die. 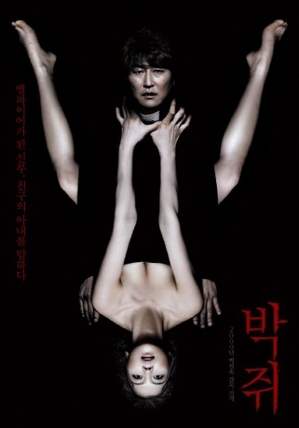 The poster for "Thirst"

Judging by Park Chan-wook's previous films including "I'm a Cyborg, but that's OK" and the "Oldboy" trilogy, I expected "Thirst" to be wicked fun, and it was. It's essentially a vampire story, but one in which the director makes up his own conventions and sadistic/funny vampire rituals. For instance, his vampires acquire super-human strength and can fly, and Park makes use of the kind of deft wire-work and acrobatics more usually associated with martial arts films.

A young priest volunteers for a medical experiment, becomes infected by an incurable virus and dies, but a transfusion brings him back to life. He becomes a hospital chaplain, and is reunited with a childhood friend who pulls him into his family circle. The cleric's vampire appetite develops in tandem with his growing lust for his friend's browbeaten wife, and then things get really complicated by unsettled grudges, a fiercely domineering mother-in-law, and insatiable blood lust that drives the priest to hook himself up to comatose patients via IV for a meal.

The humor is dark and consistently over the top, and some of the sight gags are real crowd-pleasers. A scene in which the priest tries to deflect carnal thoughts by repeatedly whacking his erection with a flute got the biggest laugh of the film in the screening I attended. A wonderful sequence in which the paralyzed mother-in-law manages to make an accusation of murder by means of her eyes and one moving finger is a tour de force.

A British film critic finds a surprise in his locker.