A couple too frail to last?

At Sundance, going to the movies is a way of taking shelter from the surrounding snow and cold, and I find it amusing to see scores of cinephiles arguing about movies in their full winter attire. It's as if skiing wasn't enough: the real fun over here is to slide down the slopes of filmmakers' visions -- even if every now and then pain and bruises may result.

It's always fun to see a movie from one's country of origin playing at an international film festival, if only to learn what travels well and what is lost in translation. It's rare that a Polish gets to a big fest like Sundance, so I was very excited to see Jacek Borcuch's "Lasting" ("Nieulotne") making the cut. Borcuch, whose 1980s nostalgia piece "All That I Love" was screened at Sundance three years ago, is one of very few Polish directors to rely on visuals rather than on dialogue. He has a real filmmaker's sense, and even if his latest effort is not successful, it's certainly an interesting failure.

"Lasting" opens with a Malick-like sequence of two young people celebrating their love amidst natural beauty that's suggestive of the Garden of Eden. The images are disjointed and the mode poetic, thus announcing the director's method of choice. The first half of the film is set in rural Spain, where the young student Michał (Jakub Gierszał) works a summer job and spends time with his girlfriend Karina (Magdalena Berus). It's all sensual bliss and innocent carnal fun -- up to a point. A violent, unexpected occurrence serves as a speed bump, breaks the film in half (not unlike in Julia Loktev's "The Loneliest Planet"), and from then on the characters have to overcome a trauma of unwanted responsibility -- first separately, then together. 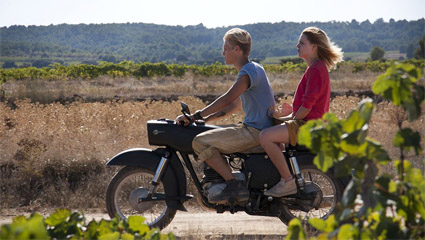 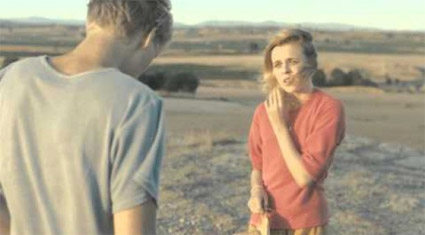 The long second half of the movie takes place in Kraków, a city I know all too well, having lived there for the past twelve years. Whenever it appears in Polish movies, it's usually for the sake of its postcard beauty, and so it was refreshing to see Borcuch trying to come up with new ways of portraying the place. It's introduced by means of a shock cut, transporting us from the sun-drenched Spanish plains to what is possibly Kraków's single most hideous location: the still-unfinished stump of an abandoned 1970s skyscraper, too expensive to dismantle and nicknamed 'Skeletor' by the locals. From then on, the city serves as an ominous stage for the characters' struggles to deal with their past and open themselves to a (possibly shared) future.

More than anything else, "Lasting" resembles an emaciated version of Gus Van Sant's "Paranoid Park": it's all free-floating guilt and sensual immersion, save for the fact that Borcuch is much more constrained by realism and lacks the eccentricity to make his vision truly striking. The whole film plays like a narrative filmmaker's dream of making a non-narrative feature (the uneasiness is palpable). Borcuch's simple, one-trick script doesn't provide him with enough fuel to get the mileage the film is clearly trying to achieve. As Michał Englert's wide-screen camera follows the characters in endless passages of dialogue-free non-action, the material runs out and we're waiting for development that never comes (and all we get is a coda that feels unearned).

"Lasting" is an interesting stab at making a film in which it's the ambiance, rather than plot, that carries the meaning. If it proves anything, it's the fact that one needs truly powerful directorial chops to craft something delicate and, well, lasting at the same time. I believe Borcuch will one day arrive at that point.