On the surface, "Them!" (1954) is a movie about giant ants that attack Los Angeles, but there's also a surprisingly feminist subtext buried within its nuclear paranoia and insect Armageddon.

About a third into the film, a pair of square-jawed heroes played by James Arness and James Whitmore are about to make their descent into the giant anthill. The army has baked the hill with phosphorous and then filled its tunnels with cyanide gas. They think they've killed all the 15-foot-long ants that built the hill, but they have to go through its tunnels to make sure that no queens survived. Just as the Jameses are securing their gas masks, Dr. Pat Medord (Joan Weldon), an expert in myrmecology, the study of ants, insists on going with them. Arness, just one year before going on to embody American masculinity in a gazillion episodes of "Gunsmoke," tells her that the ant hill is no place for a woman.

"You wouldn't know what to look for," she tells him. "There isn't time to give you a crash course in insect pathology."

The doctor is right. The square-jawed heroes are the kind of men who just defeated fascism in World War II, but they have to overcome their gender bias if they're going to stop these mutated ants from destroying humankind. She's going into the anthill, and her struggles with so many male egos just to be taken seriously anticipates those that professional women would face for decades to come. By its nature, science fiction must look to the future even when it's set in the present. 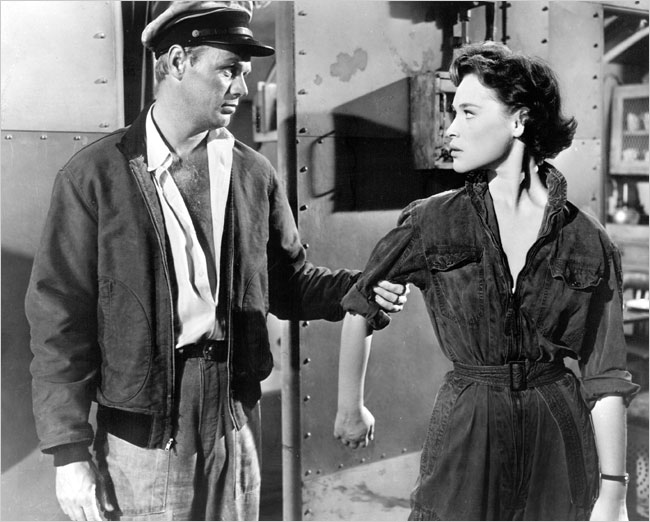 And "Them!" isn't the only 50s science fiction film to depict monster-fighting feminists. Faith Domergue schools steely-eyed Navy man Kenneth Tobey in marine biology throughout "It Came from Beneath the Sea" (1955), Ray Harryhausen's giant octopus epic. In Sam Fuller's atomic scare movie "Hell and High Water" (1954), Bella Darvi (pictured above), playing yet another attractive woman scientist, causes Richard Widmark to ask, "What makes a girl who looks like that get mixed up in science?" Ann Robinson plays an aspiring physicist in "War of the Worlds" (1953). The woman scientist character is so prevalent in these movies that Angela Stevens' ditzy housewife making martinis for her scientist husband (Richard Denning) in "Creature with the Atom Brain" (1955) seems strangely out of place.

Universal International probably did the most to forward the woman scientist archetype in "The Creature from the Black Lagoon" (1954), easily the most famous '50s monster movie and the only one to spark off a franchise as well as a pinball machine. Once you get past the series' dominant image of the gill-man making off with a wet Julie Adams in a tight one-piece swimsuit, you have portrayals of professional women wrestling with the conflict between career and family that is still fueling today's so-called "gender wars." 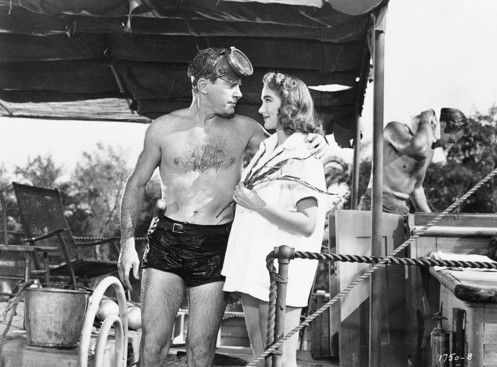 In the first "Creature" film, Julie Adams is torn between loyalty to her swaggering mentor (Richard Denning) and the sensitive scientist she loves (Richard Carlson). Fortunately for her, monster movie veteran Whit Bissell is on hand to tell her that Denning's "present position at the institute" is due to her "valuable research."

"He needed you just as much as you needed him," Bissell says right before being mauled by a clawed amphibian.

Since the Creature has a preference for educated women, Lori Nelson is cast as the conflicted scientist-in-a-swimsuit in the sequel, "Revenge of the Creature" (1955). When she isn't studying the Creature at an aquatic park in Florida, she muses to a smarmy John Agar about how she got started in "science, fish, ichthyology."

"Where will it all lead me?" she asks. "Most of the kids I went to undergraduate school with are already married and having children." 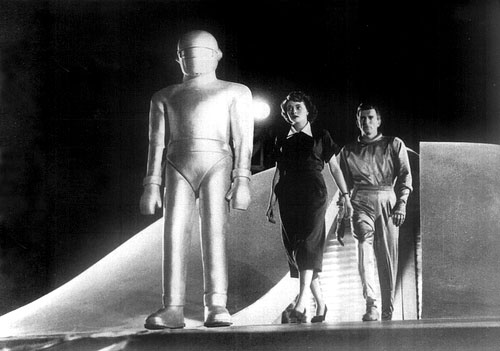 And not all liberated women of '50s science fiction had a Ph.D. As Helen Benson in "The Day the Earth Stood Still" (1951), Patricia Neal portrays a single mom who works at the Dept. of Commerce and lives in a Washington D.C. boarding house with her young son. Being a war widow, Mrs. Benson has attained the only socially acceptable form of single motherhood in 1951, but she still faces the grief of losing her husband while juggling childcare, dating and her career. In Neal's capable hands, Mrs. Benson (as she's mostly referred to) has the intellectual curiosity to befriend Klaatu (Michael Rennie), a persecuted alien on a peaceful mission, and the courage to face down Gort, a hulking silver robot with the power to destroy the Earth. Although she lacks a degree in myrmecology or physics, she's also never reduced to being a mere damsel in distress like her more educated sistren.

While it's highly doubtful that '50s filmmakers had female empowerment on their minds when they included so many assertive women in their lucrative science fiction releases, female empowerment resulted nonetheless, even if it was the accidental outcome of packaging a character that women could relate to with eye candy for the men. In her October 8, 2013 RogerEbert.com piece, "Visual Pleasure and Voodoo Demographics: a Reflection on Woman and Film," Carrie Rickey writes that "in the 1930s and 1940s each studio has female screenwriters to create female characters." If this practice was carried into the studio system's waning days in the '50s, it goes a long way towards explaining the nuanced portrayals of professional women in so many movies about rampaging monsters created by a science gone mad.

With the collapse of the studio system, the woman scientist character seemed to vanish from future remakes and re-imaginings of '50s science fiction movies even as more actual women scientists graduated from America's universities. Where Howard Hawks' "The Thing from Another World" (1951) sports an assertive Margaret Sheridan who holds her own with military men and scientists, John Carpenter remade the film in 1982 with an all-male cast. There are also no lady ichthyologists on the expedition to kill the shark in Steven Spielberg's "Jaws" (1975), Universal's slick updating of its "Creature from the Black Lagoon" formula. Spielberg also has no space for educated women in his 2005 remake of "War of the Worlds," reducing Ann Robinson from the original to a cameo as a grandmother, and casting an 11-year-old Dakota Fanning in the film's most prominent female role. 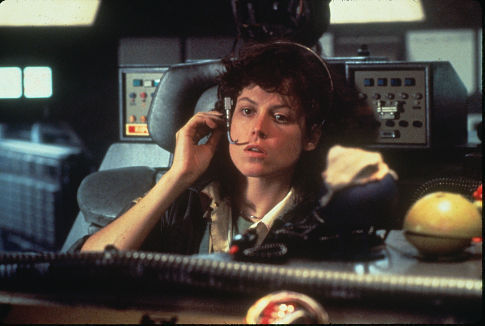 Dan O'Bannon and Ridley Scott flew in the face of the then-current trend, however, when they created "Alien" (1979), their brutal (and uncredited) reinterpretation of "It! The Terror from Beyond Space" (1958). As Ripley, Sigourney Weaver outlasts the beardy captain of the Nostromo, a murderous android and the nearly indestructible xenomorph, and she continues doing this through a trio of sequels. Ripley is no continuation of the woman scientist of the '50s, but the logical progression from her that other filmmakers failed to embrace. Ripley is as much the voice of reason as Dr. Medford in "Them!", and she is also the square-jawed hero.

Bob Calhoun is a San Francisco-based freelance journalist. His work has appeared in Salon.com, "The San Francisco Chronicle," ComicsBeat.com and "Inside Kung-fu." He is the author of "Shattering Conventions: Commerce, Cosplay and Conflict on the Expo Floor" (Obscuria Press, 2013), an exploration of the temporary worlds created in comic cons, "Star Trek" cons, gun shows, hemp expos and rodeos.