"Amy Jo Johnson's 'The Space Between' Eases Pain with Playfulness": My review of the well-acted Canadian gem at Indie Outlook.

“The trickiest role in the picture, by far, is that of Emily, a 19-year-old woman harboring a tremendous amount of anguish beneath her self-assured façade. We first see her literally at the end of her rope, preparing to hang herself from a tree, when Mitch unknowingly disrupts the impending tragedy. As soon as Emily spots Mitch, she takes an immediate interest in his plight, embracing his problems as a distraction from her own. Her confidence is so convincing that it causes us to question whether she was indeed suicidal, until the camera lingers on her face during a private moment, and the vulnerability materializes once again. This character could easily come across as phony in the hands of a less gifted performer, but Johnson made the wise decision of casting Julia Sarah Stone, who affirms her status here as one of the best actors of her generation. I first saw Stone in Lindsay MacKay’s masterful coming-of-age drama, ‘Wet Bum,’ and was astonished by the depth and nuance of her performance. Last year, I got the chance to interview Stone at the Toronto International Film Festival, where she lit up the screen in Bruce McDonald’s black-and-white charmer, ‘Weirdos.’ One of her answers that stuck with me was her observation that ‘a scene is just an honest interaction between people.’ If there is any one thing that has defined Stone’s work thus far, it’s the unflinching honesty she brings to each moment. She illuminates the underlying needs of her character without ever having to articulate them. We believe in her, and therefore believe in Emily as well.” 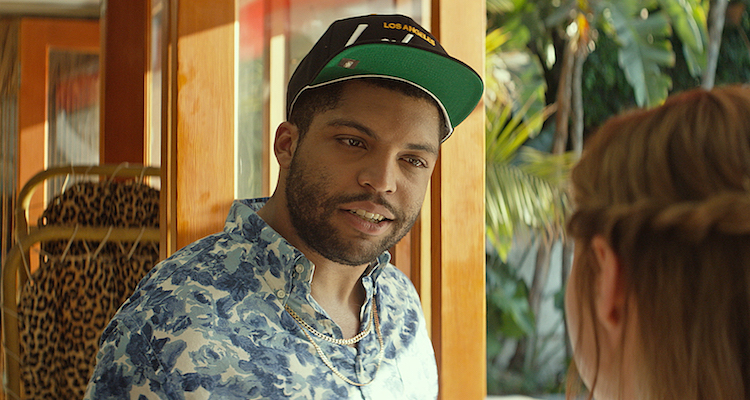 “Right from his introduction, Dan makes an impression, particularly as a contrast to Ingrid’s own social-media-fueled journey. As Ingrid’s unofficial landlord and neighbor, he stops by, armed with his vape pen and winning smile, and immediately offers her his guest house, business card and, most generous of all, his friendship. Jackson’s effortless charm and charisma don’t fall far from the tree (Ice Cube being his father and all), Dan’s laid-back sense of ease is a refreshing alternative to the cliquish insufferability of Elizabeth Olsen’s Insta-family – while they hoard followers and photos as the sum total of their self-worth, Dan just wants to relax, have fun and vape the day away. Maybe the most prominent character trait of Dan Pinto is his intense, nearly single-minded love for Batman. Specifically, it seems, the Joel Schumacher version(s) seen in ‘Batman Forever’ and ‘Batman & Robin’ – a promotional shirt from ‘Forever’ is thrown around as a make-up gift from Ingrid to Dan to make up for borrowing (and trashing) his truck, and even his business card is in the pointy block font made famous by those particular movies. Dan’s a Batfan of the highest order, writing Batman fan screenplays and hosting them in his apartment. In lesser hands, such an affectation would make Dan Pinto a one-dimensional goof, but instead it makes him incredibly endearing. (It helps that Jackson himself apparently shares Dan’s love for the Caped Crusader, making his fandom seem even more authentic.) Even his love for the version of Batman most people feel comfortable dismissing speaks volumes to Dan’s identification with misfits and outsiders, and subsequently his attraction to the awkward, unconventional Ingrid.” 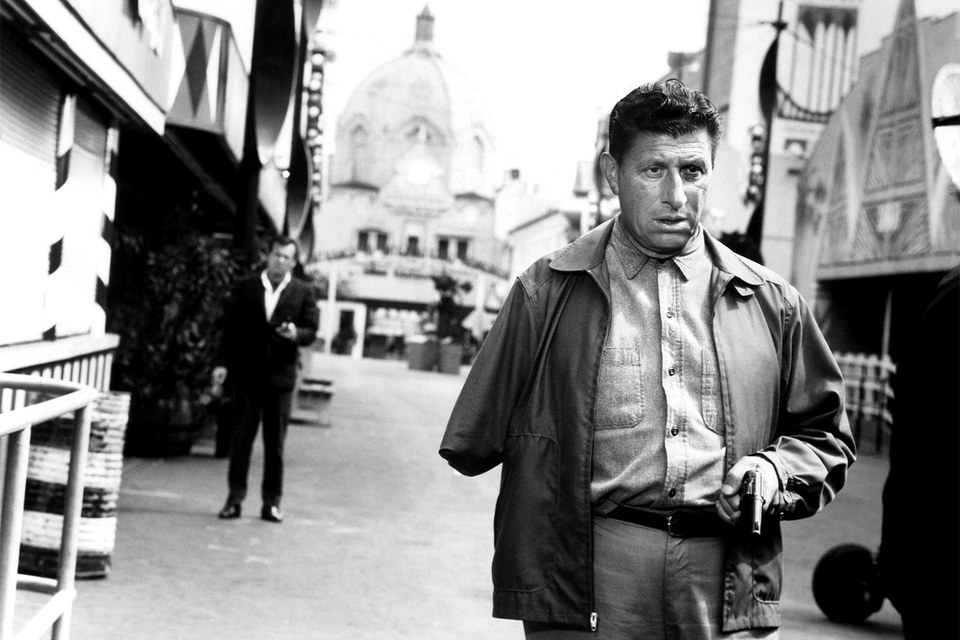 “It turned out that my brother was not far off: the numbers for the August 29 broadcast were ‘incredible,’ says Ron Simon, curator of Television and Radio at the Paley Center for Media in New York. The finale garnered a 72 percent share—meaning that of the people watching TV that night, almost three-quarters were watching ‘The Fugitive.’ Which was odd in a way, Simon noted—because though ‘The Fugitive’ was an Emmy winner in its third season, it wasn’t a top-rated series anymore. ‘It was only in the top 10 for its second year,’ he says. ‘By the third and fourth season, the show wasn’t gathering momentum.’ Still, he adds, the series ‘meant so much to so many people, although they weren’t following the series over the course of its four seasons,’ that it was only natural for them to tune in to see how it would be resolved. Part of it was the empathy viewers felt for Kimble. ‘It is an archetypal character, the loner as seen in westerns,’ Simon says. ‘For the counter-culture at the time, he represented the man besieged by the establishment [who] had to live underground. [For others,] it was a Hitchcockian situation where the falsely accused must right the wrong against him.’ ‘The Fugitive’’s finale may have also benefited from an unusually uneasy zeitgeist. ‘The summer of ’67 began with the Summer of Love and Sgt. Pepper,’ Simon explains, ‘but it faded into riots in Detroit and Newark. Cities were burning and the country was on edge. It needed some type of resolution.’” 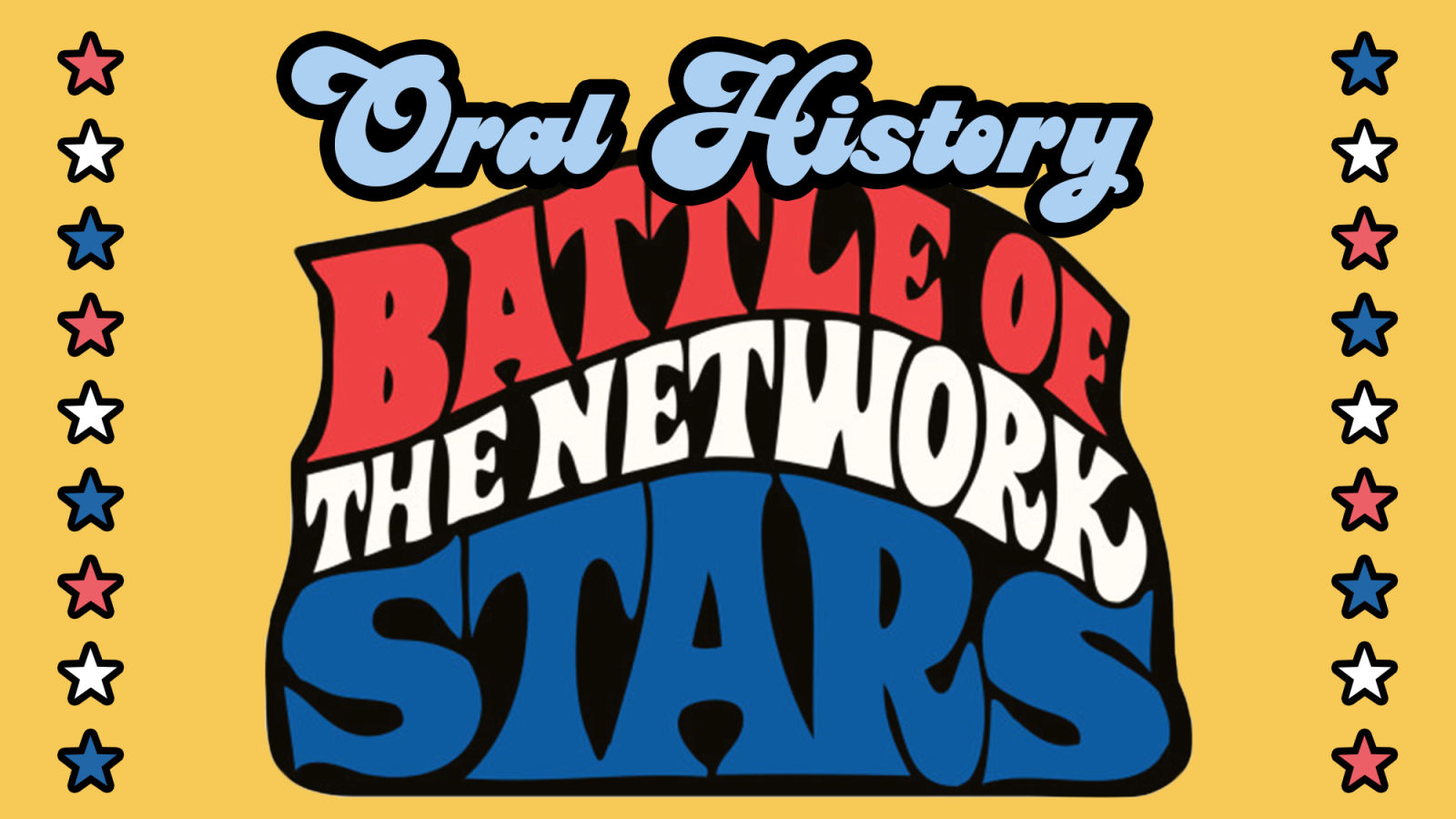 "A Battle Royale Revisited: An Oral History of 'Battle of the Network Stars'": As compiled by Will Harris of The A.V. Club.

“Once upon a time in a seacoast town, three fearless leaders of great renown summoned the men, the women, and the young to do battle for glory, for honor, and pride. The lines were drawn, the intent was clear: those that gathered would clash without fear. Their soldiers came not on foot nor horseback but by jet and limousine, as befitted their station. They came girding for battle to hurl themselves against each other in mortal combat, all lusting for victory at any cost. And when they met, it was called… the ‘Battle Of The Network Stars’! The preceding paragraph was taken word for word from the opening minutes of the very first installment of ‘Battle Of The Network Stars.’ The program, which made its debut on November 13, 1976, offered an athletic competition between the prime-time stars of the three existing networks at the time: ABC, CBS, and NBC. As you can probably tell from the tone of the introductory narration—which was intoned by William Conrad, no less—the idea of actors turning athletes was being treated as something so completely absurd that it could only be introduced to viewers with a wink and a smirk. That’s how the majority of the participants in the first year of ‘Battle’ approached their participation in the competition, but it didn’t take long for them to start taking it seriously. With the return of ‘Battle Of The Network Stars’ to ABC after a nearly 30-year absence, The A.V. Club reached out to a number of participants from the original installments of the program, including both the actors-turned-athletes as well as the supervising producer on every ‘Battle’ between 1976 and 1985. Prepare yourself for a story featuring the thrills of victory, the agonies of defeat, and the financial incentives that drove these actors to push themselves beyond common sense and make their way into the winner’s circle whenever possible.” 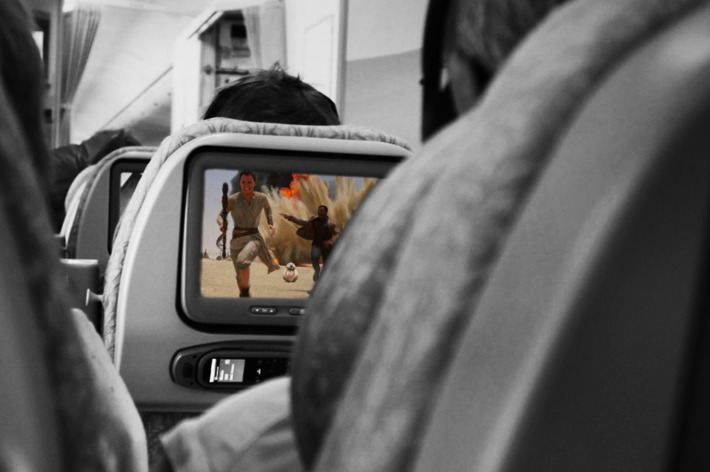 "Why Do I Love Watching Someone Else's Movie On An Airplane?": Asks Vulture's Kyle Buchanan.

“Watching a movie in this way can also give me a newfound appreciation for something I’ve already seen. I’m a big fan of the Best Picture winner ‘Spotlight,’ though I never really understood how Rachel McAdams managed a Best Supporting Actress nomination for her competent, unshowy work in the film. When I watched someone else watch ‘Spotlight’ on a plane, however, I was blown away by the performance McAdams gave in the scene where she confronts a priest who confesses all too readily to awful crimes. Watch it again with the sound off: As her character tries to keep it together and press further despite her clear astonishment, the competing emotions that flicker on McAdams’s face had me evaluating her in a whole new light. It’s marvelous work, and watching someone else’s in-flight film really makes you appreciate movie stars all the more: When you’ve got little besides these faces to orient you, it helps to have damn good ones to stare at. I thought maybe I was the only oddball who watches movies this way, but when I spoke to ‘Baby Driver’ director Edgar Wright last week just before he was about to board a long flight to Beijing, the subject came up and he laughed. ‘I know exactly what you mean, and I do that, too!’ he said. ‘Here’s an interesting thing: People say that when a film has great visual storytelling, you can follow it with the sound turned off. Sometimes I do exactly that when I watch a film over somebody’s shoulder, or even when they have the film on in the middle of the aisle and you have to put the headphones on to watch it. I don’t put the headphones on but I can completely follow the movie.’” 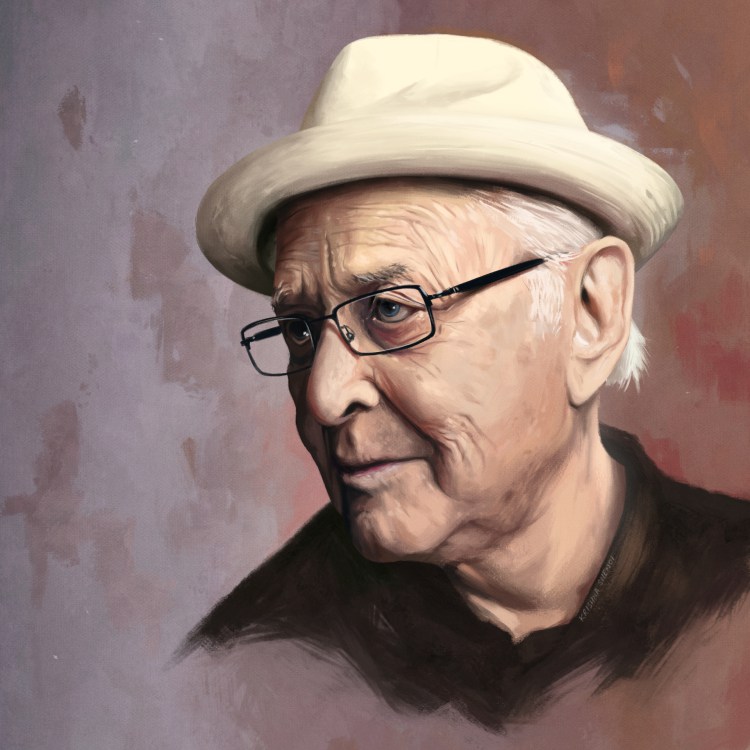 The astonishingly talented young ventriloquist Darci Lynne Farmer performs a showstopping number on NBC's "America's Got Talent," earning her place in the semi-finals. It's as joyous a performance as any I've seen on film I've seen this year.