"Dead Girlfriends' 'On Fraternity': A Roundtable: Seven female writers talk male feminism (and/or 'mansplaining") in pop, from Fugazi to The-Dream."  From Spin.

"Part of being a male feminist is that when you make a misstep —even a small one — we're going to call you out on it. I guess it's a little unfair that once you declare yourself a feminist, we will scrutinize you even harder than before. But I don't think the answer is giving every dude who calls himself pro-woman a free pass to make mistakes, just so they'll want to be on our side." 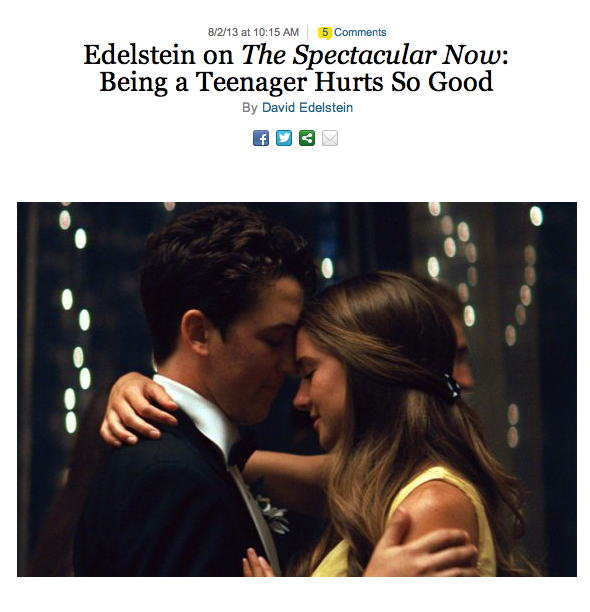 "Sutter Keely (Miles Teller), the protagonist of The Spectacular Now, is a zany, fast-talking 18-year-old who riffs on the importance of living in the present — the now. He thinks his ready heart caused the breakup with his beautiful, blonde girlfriend, Cassidy (Brie Larson), who found him drinking in his parked car with another girl. Cassidy didn’t understand that he was keeping the girl company while her friend was in a canoe with his buddy — that he was helping the guy get laid! Sutter is so bummed about Cassidy he gets extra-loaded and wakes up at dawn on someone’s lawn, staring up at a girl from his school named Aimee (Shailene Woodley). He has never met her. She’s a studious, forward-looking person who doesn’t party. But she’s very pretty in her unassuming way and obviously into him, so it isn’t long before he’s passing her his flask and kissing her and asking her to the prom. At first you think he’s only using her to make Cassidy jealous. But then, gradually, it seems as if he does like her, at least enough to pull her into his spectacular now — which is, too often, a drunken haze." 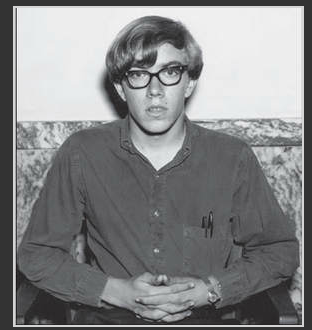 "Millikin professor had dark secret: he killed his family 46 years ago." By Dave McKinney, Frank Main, Jon Seidel and Becky Schlinkerman of The Chicago Sun-Times.

"Not until the publication of an investigation by a Texas newspaper did it become known that he was at Millikin after shooting his parents and teenage sister to death in Texas in 1967. St. James avoided prison time after being found insane at the time of the slayings. After he was hospitalized for several years, he was found to be sane in 1974, later changed his name from Jim Wolcott, got his college degrees and joined the Millikin faculty. St. James’ violent past has provoked a debate about his future with the private college, which for now is sticking by him and saying it expects him to continue teaching psychology classes this fall. Millikin also made clear it had not been told of the killings when it initially hired St. James. 'For 27 years, he has taught a variety of courses at Millikin, served in various leadership roles and built a successful academic career receiving academic awards including the 1997 Teaching Excellence and Leadership Award,' the college said in a statement released Thursday." 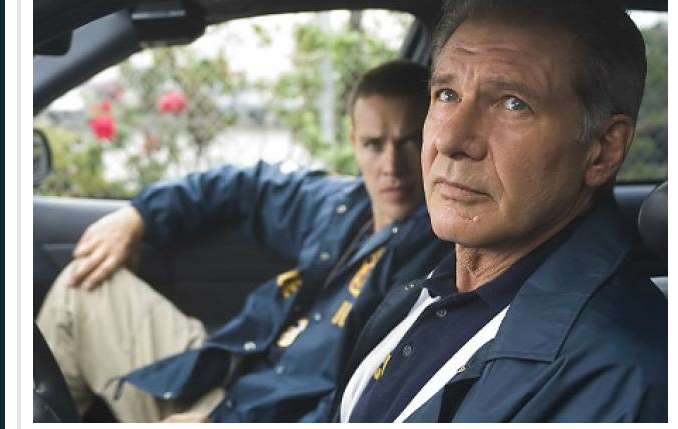 "What It's Like to Have Your Movie Taken Away by Harvey Weinstein." Jack Giroux of Film School Rejects interviews filmmaker Wayne Kramer about his experience working with the producer on his 2009 immigration drama Crossing Over. It's not a pretty story.

"It’s very hard to move forward. I don’t think people understand how brutalizing it is to you while you’re going through it. This is your baby. That movie was very personal to me, because I had also gone through the journey of being an immigrant, and I wanted to write about that as a film. To see it being dismantled week after week and all the things you thought had nuance…I mean, the sex scenes were more explicit in my original cut. You go through a preview audience and they say, “We don’t need to see all this nudity!” It’s, like, where were they on the set when you were making it? I think that’s where it’s going in the future: you’re going to have a 12-person marketing committee picked from a general public questioning every decision you make, because that’s what they do it in post-production." 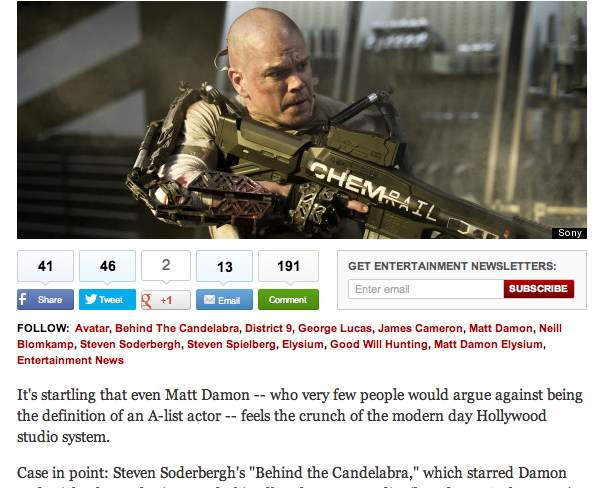 "Matt Damon on 'Elysium,' turning down 'Avatar,' and the state of Hollywood Today." An interview by Mike Ryan, for The Huffington Post. Among other things, Damon talks about what he thinks is the proper use of special effects in a blockbuster, and his and Steven Soderbergh's fondness for "Oceans 12."

Wikipedia blocks an ISP address for vandalizing Edward Snowden's page. It's registered to the U.S. Senate. " If you are an unregistered user operating from this address, note that it may be possible for your agency or facility's administration to determine who was making contributions from this address at any given time and abuse reports may be sent to its network administrator for further investigation," Wikipedia warns whoever did this.

A slice of Lynch. One piece of an hour-long conversation between David Lynch, Mädchen Amick, Kyle MacLachlan and producer John Wentworth. Originally included on the 2001 DVD box set of Season 1 of the series.