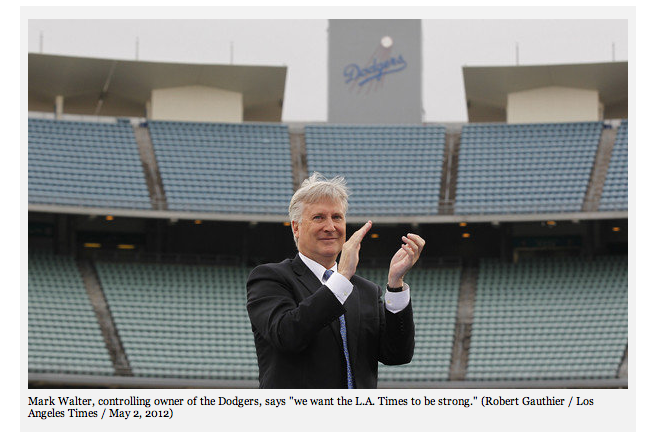 "Walter is the chief executive of Guggenheim Partners, a Chicago-based financial services firm that controls more than $180 billion in assets, according to its website. He said he is interested in acquiring both The Times and the Chicago Tribune — in part because he is interested in increasing the diversity and improving the quality of information available to the public. Both papers are owned by
Advertisement
Tribune Co. 'We want the L.A. Times to be strong,' Walter said. 'We want the Tribune to be strong.' Walter did not elaborate on what action, if any, he has taken toward making a deal." 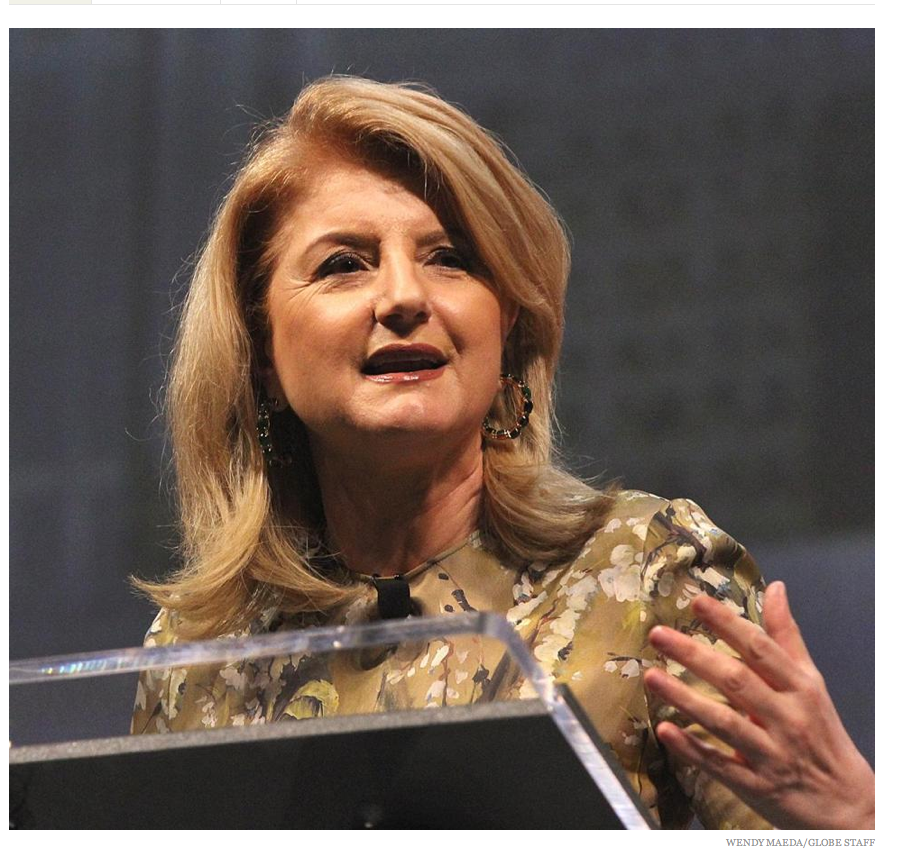 "Huffington Post to ban anonymous comments." By Callum Borchers for The Boston Globe. Even Arianna Huffington has had enough.

"The days of anonymous commenting on the Huffington Post are numbered. Founder Arianna Huffington said in Boston Wednesday that the online news site plans to require readers to use their real names to comment on stories, beginning next month. '

Freedom of expression is given to people who stand up for what they’re saying and not hiding behind anonymity,' she said. 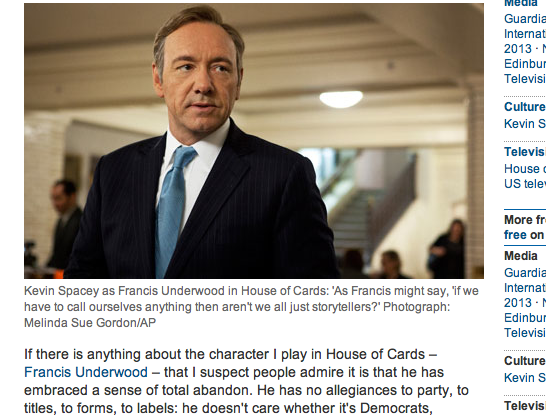 "The MacTaggart Lecture: How NetFlix Killed the Watercooler Moment—and Breathed New Life into TV."  By Kevin Spacey, for the Guardian of London.

"The success of the Netflix model – releasing the entire season of 'House of Cards' at once and online – has proved one thing: the audience wants the control. They want freedom. If they want to binge then we should let them binge. And through this new form of distribution, I think we have demonstrated that we have learned the lesson the music industry didn't learn: give people what they want, when they want it, in the form they want it in – at a reasonable price – and they'll more likely pay for it rather than steal it. Well, some will still steal it, but I believe this new model can take a bite out of piracy." 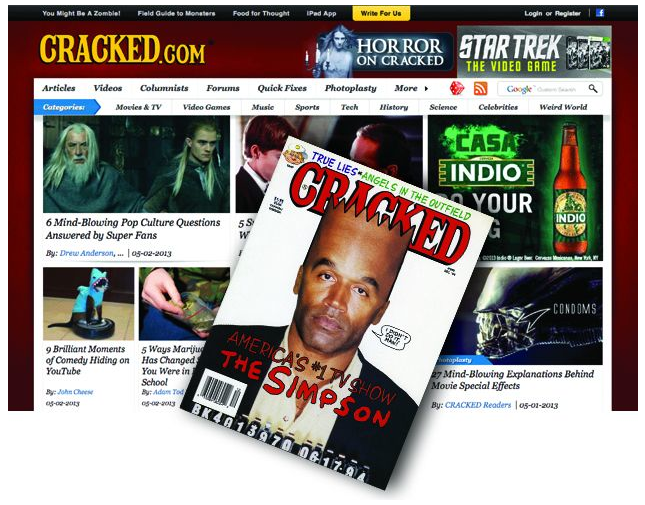 "Zombies, Celebrity Sideboobs and Smart Social Commentary = Web Gold." How Cracked Magazine, once an inferior competitor of Mad, reinvented itself as a website filled with provocative but fun link-bait. Interview with senior editor Jason Pargin, by Kate Sheppard of Mother Jones.

"We don't want to come off as pretentious—we once published an image gallery called "Boobs on Things That Don't Normally Have Boobs," and would do it again. But we would like to distinguish a Cracked list from most internet lists. The average user is buried under so many links and headlines that they like being told exactly what they're getting: "14 Pictures of Cats Wearing People Clothes." Cracked uses the Internet's love of lists to ease people into reading about subjects they otherwise would never have cared about. Last year we did an article called "The 6 Most Aggressively Badass Things Done by Pacifists," which is sitting at 865,000 pageviews."

"Apple, Closer to its Vision for a TV Set, wants ESPN, HBO, Viacom and others to come along." By Zachary M. Seward, Gina Chon and Kevin J. Delaney of Quartz.

"Apple is negotiating with production studios and networks to provide content for a television set that would emphasize apps over cable TV, according to people familiar with those discussions. Among the companies that have talked to Apple are Disney’s ESPN, Time Warner’s HBO, and Viacom, which owns MTV Networks, Nickelodeon, and Comedy Central. It’s unclear how close these deals are to fruition. Some people cautioned that, with the TV industry in such flux, 'everybody is talking with everybody.' Any deal with an internet TV service like the one envisioned by Apple is likely to be under similar terms as the networks have negotiated with traditional cable companies. Sources say Apple’s strategy could include forming its own pay TV service, essentially becoming a cable company itself, except with content delivered entirely over the internet." 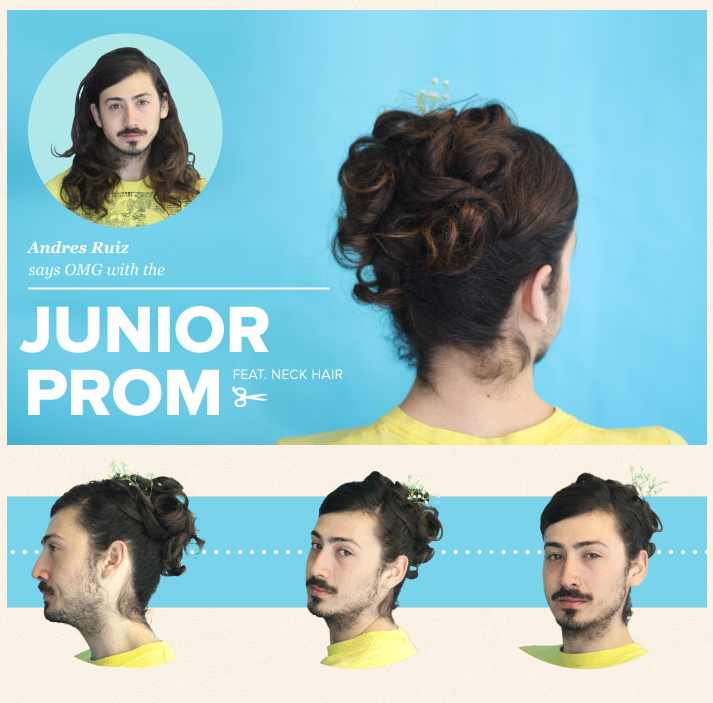