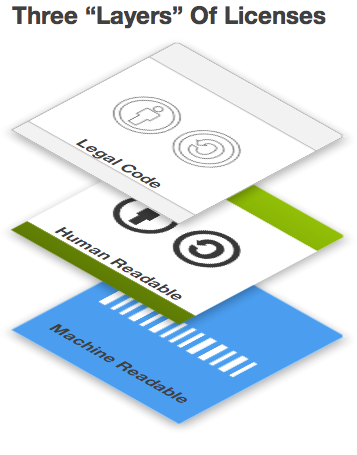 "Copyright Law on the Internet is a Total Train Wreck Right Now." By Pamela Vaughan, for the marketing blog Hub Spot.

"It's a perfectly fine Thursday afternoon. I'm going about my business, happily editing a blog post, when I get an email from the head of HubSpot's legal department. Oh boy.  Apparently, he'd received a letter from a popular stock photography website claiming we had wrongfully used two of their images on our blog. My first thought was, "What? This must be a mistake."We're very good about only using photos and images we have permission to use on the blog. As a result, we usually either purchase stock photos or use images sourced from sites like Flickr licensed under Creative Commons, which is a nonprofit offering easy-to-use copyright licenses that make it easy for people to give permission for others to share and use their creative work. In fact, we've even written about how not to steal people's content on the web, and what to do if you're a victim of stolen content. So ... what gives?" 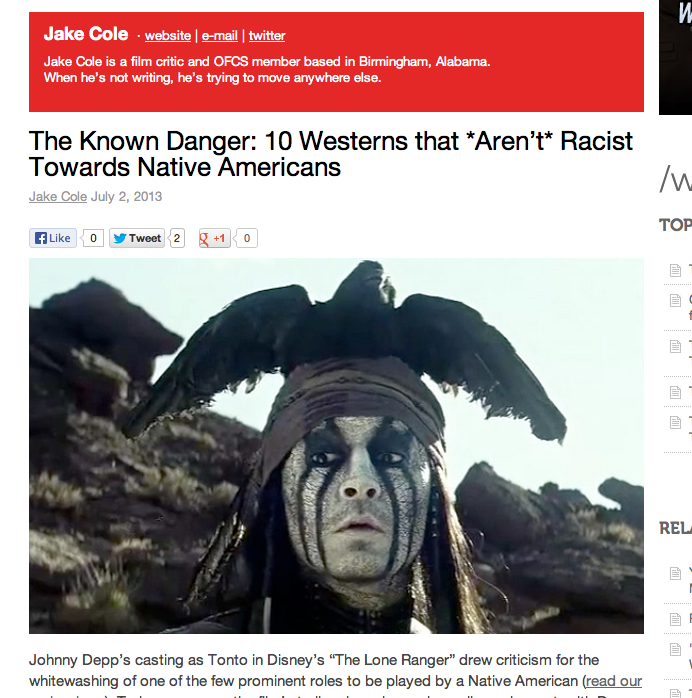 "The Known Danger: 10 Westerns That Aren't Racist Toward Native Americans." By Jake Cole, for Film.com, a list of Westerns that demonstrate advanced or at least reasonably fair-minded attitudes about Native Americans. The Outlaw Josey Wales strikes us as a conspicuous omission, and no doubt you'll have your own. But all in all, this is quite a good list.

"Released more than a decade before Cormac McCarthy’s masterpiece 'Blood Meridian,' 'Ulzana’s Raid' nevertheless feels closer to that book’s spirit than any Western made since. In sharp contrast to the “hippie-fication” of Indians with movies like 'Little Big Man,' Robert Aldrich’s late Western depicts its white characters as brutal—one Cavalry soldier 'rescues' a white woman from Apache by shooting her in the head, and in his terror he kills himself rather than be taken—but its Apache no less so. Ulzana (Joaquín Martinez) and his men rape and slaughter, albeit with a head for strategy that counters stereotypes of mindless savagery. Their actions are not those of Godless brutes who simply act out their nature, but of cunning warriors who know how to demoralize the enemy. In the film’s estimation, the war between whites and natives is completely removed from those fighting it, but that only makes the possibility of peace less likely. No one among the groups of soldiers and Apache started this war, but none has the agency to do anything but try and kill as many on the other side as possible."

"The Day the Lone Ranger Lost His Mask." By David Krell, for his blog. Return with us now to those faintly depressing days of yesterday, when Clayton Moore, star of the 1950s TV version of The Lone Ranger, tried to dress like the Masked Man at public appearances, and got sued. Really, really, really sued. Also screwed, blued and tattooed.

"He appeared as the Lone Ranger at car dealerships, shopping malls, and other businesses that hired him to help sell products.  With his Lone Ranger persona complete with guns, hat, mask, and costume, Moore brought Hollywood to the heartland of America.  No matter the event, people flocked to see the Lone Ranger.  Millions of Baby Boomers idolized Moore.  They now had children of their own whom they brought to his appearances for a glimpse of their childhood icon. The formula was simple, really.  Show up in the Lone Ranger costume featuring the iconic mask, say a few words about the client’s product or service along with a citation of clean living from the Lone Ranger Creed, and ride off into the sunset of Omaha.  Or Charlotte.  Or Columbus.  Or any other mid-size metropolis looking for a wistful glimpse of yesteryear for excitement. Have six gun, will travel, But on this late August morning, Moore’s Lone Ranger persona was at risk of evaporating because of legal maneuvering by Wrather Corporation, owner of the Lone Ranger franchise.  According to Wrather, Moore benefited from a property that he legally did not own.  In short, Moore’s continued appearances jeopardized Wrather’s plans for a new Lone Ranger to be introduced in a blockbuster film." 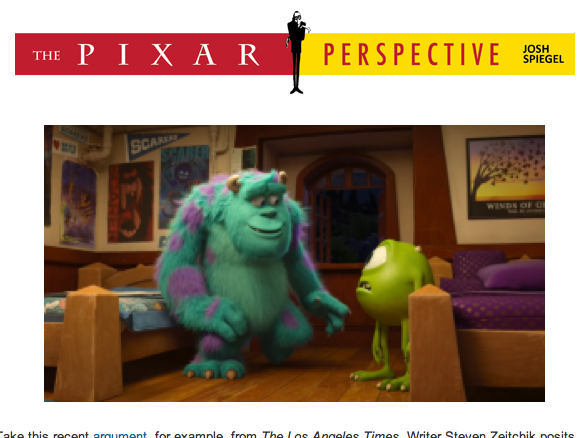 "The Pixar Perspective on Context and Pixar's Originality." By Josh Spiegel, for The Pixar Times. Wherein the writer looks at recent article alleging that Pixar's movies ain't what they used to be, and finds the arguments unconvincing.

"It’s not wrong to say that Pixar’s films are typically well-liked by critics. It’s not wrong to say that Pixar’s films are all, to varying degrees, financially successful. Even Cars 2, the closest thing Pixar has had recently to a flop, grossed more than most animated films at rival studios like Blue Sky or DreamWorks Animation. The issue is that trying to create a connection between critical praise and box office only works if you ignore, as Zeitchik did, the examples that fall in between the extremes. Yes,Cars 2 is Pixar’s least successful and well-liked film. And yes, pretty much everyone loves the Toy Story movies. But that’s the point: everyone (for the most part) loves the trilogy. Would people have avoided seeing Toy Story 3 on its opening weekend if it didn’t get bathed in critical praise? No, though perhaps the film’s overall take would’ve been lower. Or maybe people would’ve seen it in droves either way. This is the vexing part about hypothetical arguments: we can wonder all we like, but we’ll never know for sure, and when your argument revolves around factual statistics, you need to be sure."

"One Month Later: Catching Up With RogerEbert.com Editor-in-Chief Matt Zoller Seitz." By Kurt Oselund, for The House Next Door. 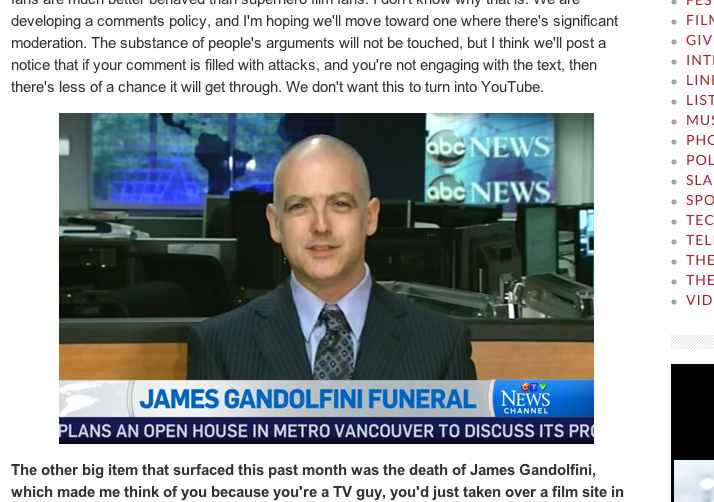 "I've been a journalist for over 22 years, and this poses a unique set of challenges in that I have every skill that I need to do this job, but I'm not Roger. And I think that's something that everyone is having to get accustomed to. It's interesting—the response has been mostly very, very pleasant among regulars on the site, and then there are some people who don't like me, and don't like what I do. Whether that's a reaction to the work itself or simply to the fact that I'm not Roger is a question that I can't answer, and I don't really know who should even try to answer it. But, you know, this is the way of human experience. Roger was a beloved man, and if it hadn't been me, it would have been somebody else, and it's very likely they would have encountered exactly the same issues. Someone that a lot of people loved very much is gone. We're never going to collectively get over that." 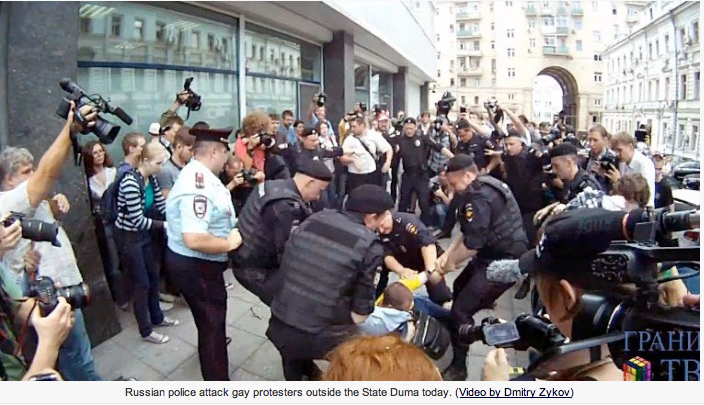 The trailer for "Siding with the Victim," a video essay series by Jed Mayer and Ken Cancelosi for Press Play.