"Why White People Don't Like Black Movies." Acknowledging that the headline makes a "loaded assertion," Shadow and Act contributor Andre Seewood lays out an academic case for a gap in empathy among moviegoers, discussing its implications for power in the filmmaking world and beyond.

"When we watch a film we are watching images of people doing tasks in the pursuit of a goal to change a circumstance and it stands to reason that if the threshold of empathy in Whites is higher when watching non-Whites perform certain tasks because of the Racial Empathy Gap, then if the Whites are watching a Black film such a high empathy threshold would make the suspension of disbelief difficult and attenuate the pleasure of their viewing experience." 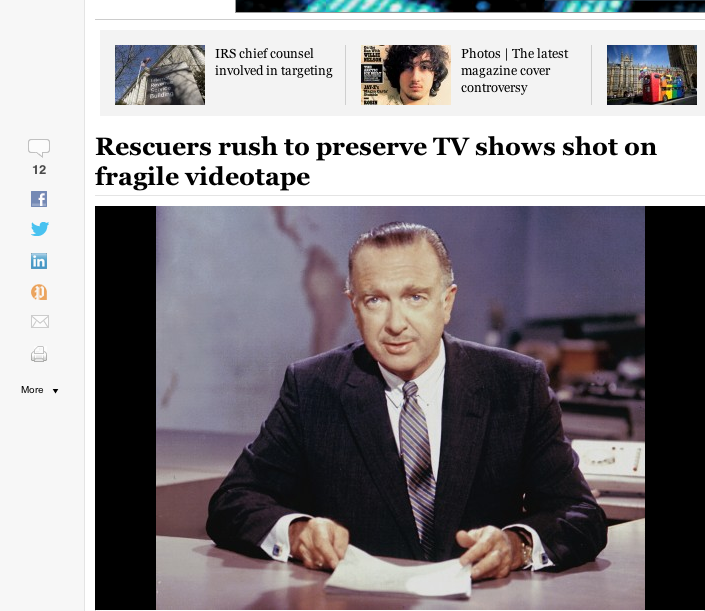 "Rescuers rush to preserve TV shows shot on fragile videotape." The type of videotape used in standard television recording from 1956 through the late 1970s was prized for its erasability and potential for reuse. Now preservation is a problem.

"Preserving these shows turns out to be a challenging and time-consuming task. But unless the videotapes are transformed, experts say, future generations will have a diminished appreciation of the era of JFK, flower power and Watergate." 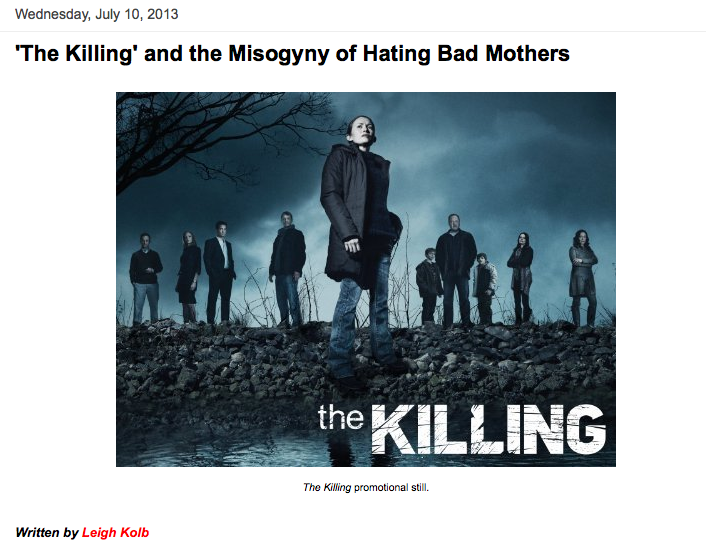 "'The Killing' and the Misogyny of Hating Bad Mothers." Leigh Kolb looks at the way critics write about AMC's show, suggesting there's a double standard when it comes to how bad mothers and bad fathers are received.

"While these supporting characters' relationships with their daughters are troubled, and it would be easy for the audience to 'blame' the victimization of the daughters on their mothers, it wouldn't be correct. We are so used to complex, fallible male characters that we are also conditioned to see them as complex and fallible, not good or evil. When we're presented with women with the same depth of characterization —especially mothers —we don't know what to do except what we've been conditioned to do: criticize them and blame them."

"What's the best black-and-white movie of the modern era?" At The Los Angeles Times, Steven Zeitchik takes a poll, citing the popularity of such recent black-and-white titles as "Much Ado About Nothing," "Frances Ha," and Ebertfest alum "Blancanieves." But the voting choices are limited. Why, for instance, is "Ed Wood" included in a slideshow but not in the poll itself?

"Ever since technology made color efficient and affordable in the 1960s, the black-and-white movie been out of vogue. But a small group of filmmakers, often over the objections of their financiers and more rational friends, are trying to bring it back. As 'Nebraska' director Alexander Payne says, 'Black-and-white is king.'"

"Questlove: Trayvon Martin and I Ain't Shit." For New York Magazine, The Roots drummer says that's the lesson he took from the verdict on Saturday, and recounts his own experiences encountering the kind of racism that got Martin killed. 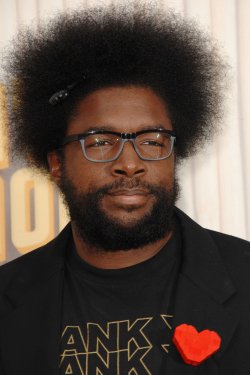 "I'm in scenarios all the time in which primitive, exotic-looking me—six-foot-two, 300 pounds, uncivilized Afro, for starters—finds himself in places where people who look like me aren't normally found. I mean, what can I do? I have to be somewhere on Earth, correct? In the beginning—let's say 2002, when the gates of 'Hey, Ahmir, would you like to come to [swanky elitist place]?' opened—I'd say 'no,' mostly because it's been hammered in my DNA to not 'rock the boat,' which means not making 'certain people' feel uncomfortable." 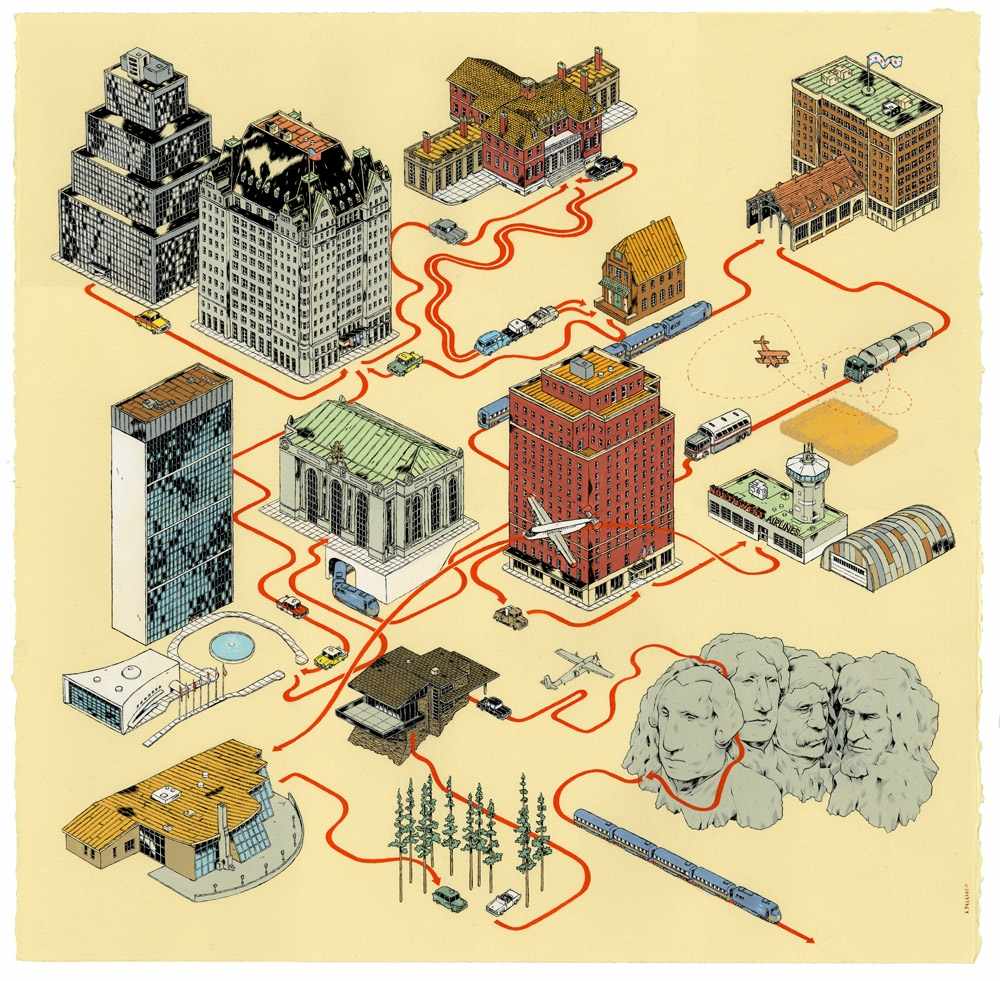 "Your Favorite Movies Laid Out as Vintage Treasure Maps." It's a quiz—Andrew DeGraff mapped out the geographies of several major films. See if you can guess each one. 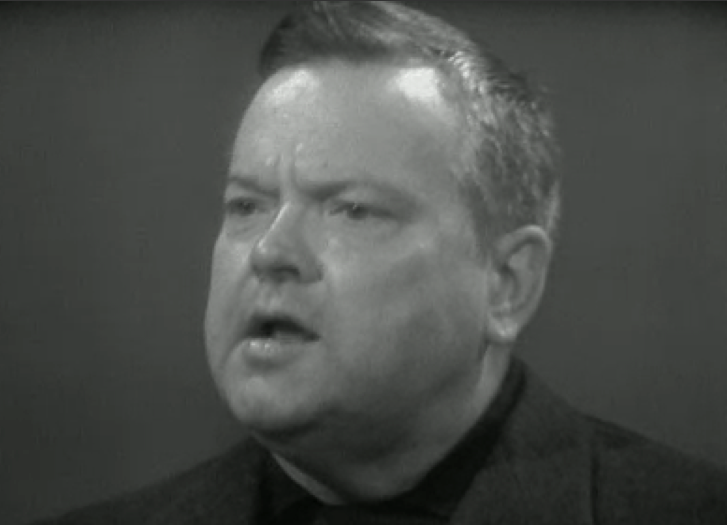