“‘Frank’ was produced primarily by Salaam Remi, who would become a trusted friend (the two worked together right up to Amy’s death). He and Winehouse shared a passion for jazz that can be heard throughout Frank, which was named after blue-eyed gangster crooner Frank Sinatra. Winehouse was all of nineteen years old when it was originally released. On the cover, the smiling, damn near laughing, Winehouse looks vibrant and fresh and nothing like the sad woman she would become a few years into the future. Compared to the staggering tragedy that emerged later, the lovely young lady walking her dog looks damn near chipper. Yet, after listening to Frank, one realizes that whatever made Amy chuckle for photographer Charles Moriarty might not have been funny to the person on the receiving side of her comment. From the opening track ‘Stronger than Me,’ you realize that not only did Winehouse have a beautifully interesting voice, but she also had a wicked sense of humor that could be just as cutting. Referring to her weak-ass boyfriend as a ‘lady boy’ who’s obviously watching Oprah and always needs to be comforted. ‘You should be stronger than me,’ Winehouse wailed as the jazzy Bacharach inspired playing in the background was punctuated by horns.” 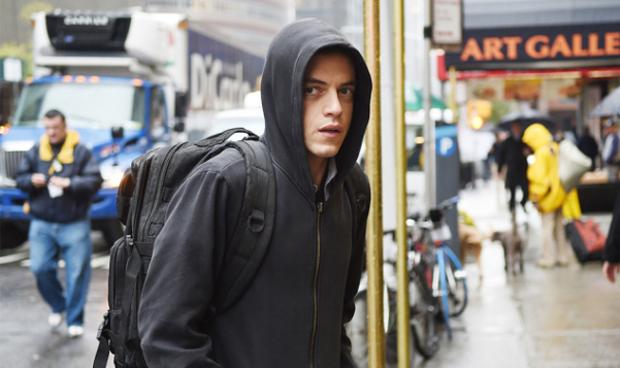 "Why 'Mr. Robot' Is 'Fight Club''s Spiritual Successor": At Den of Geek, Frances Roberts explains how the "anti-capitalist ire" of "Fight Club" is updated for the cyber age in USA Network's new series.

“Sam Esmail’s ‘Mr. Robot,’ currently airing on the USA Network, owes a huge debt to Palahniuk’s 1996 novel and moreover, to the David Fincher-directed film that followed. The series’ story of a disaffected cybersecurity technician who becomes involved with an anti-capitalist hacker group picks up where ‘Fight Club’ left off thematically and stylistically. There are such obvious points of comparison between the two that ‘Mr. Robot’ could perhaps be thought of as partly an homage to Fincher’s film. Front and centre is the series’ voiceover by lead Elliot (Rami Malek), which captures the same sense of paranoia and sardonicism as Edward Norton’s fast-talking ‘Fight Club’ narration. Like Fincher’s film, ‘Mr. Robot’ uses its voiceover creatively. This is by no means lazy storytelling. Elliot’s narration is cut between dialogue to highlight irony and hypocrisy, and used as the acerbic punchline to visual jokes. It’s also wholly unreliable for a number of reasons—perhaps the closest ‘Fight Club’ similarity of all. Elliot’s narration also functions as a vehicle for lengthy, cynical state-of-society monologues. He castigates modern life for being corrupt and counterfeit, and modern people for ‘spamming each other with our running commentary of bullshit masquerading as insight, our social media faking as intimacy.’ So far in the run, he hasn’t mouthed off about IKEA catalogues, but give the boy time.” 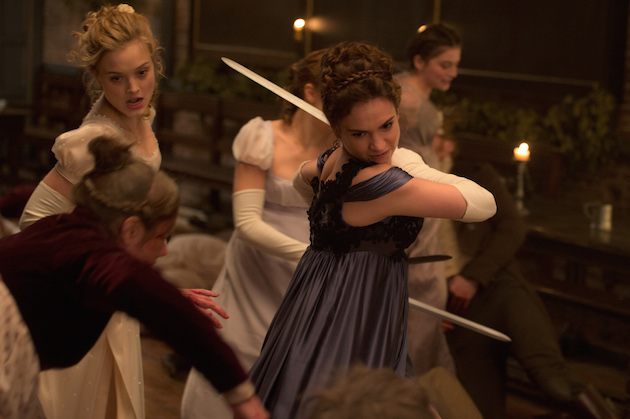 "Comic-Con 2015: 'Pride and Prejudice and Zombies' Director Burr Steers": Our own Nell Minow reports on the upcoming film adaptation from the "Igby Goes Down" director at The Credits.

“Steers is especially proud of a scene where ‘the five sisters first come in. The balls have been attacked by zombies and that’s problematic because they turn everyone else into zombies. So, having them walk in and fight, because they’re all trained – there’s something brave about five strong young women coming in and kicking ass. They know how to do it. They’ve had sword training and martial arts training.’ He was very happy that the actresses were able to do so much of their own fight scenes. ‘I had some tricks in my bag and I didn’t have to use any of them. It’s nice to have five young really athletic actresses who have to also able to spout Austen dialog. Every actor in this movie is a lead, and every one has the chops to do character pieces.’ He compared his cast, which includes Douglas Booth, Sam Riley, Bella Heathcote, Lily James, Matt Smith, and Jack Huston, to the cast of ‘The Outsiders’ where every one was on the brink of stardom. ‘You have this whole generation, a British brat pack, and they are competitive; they all push each other. They are cordial, they’re all friends, they’re all buddies, but they make each other better.’” 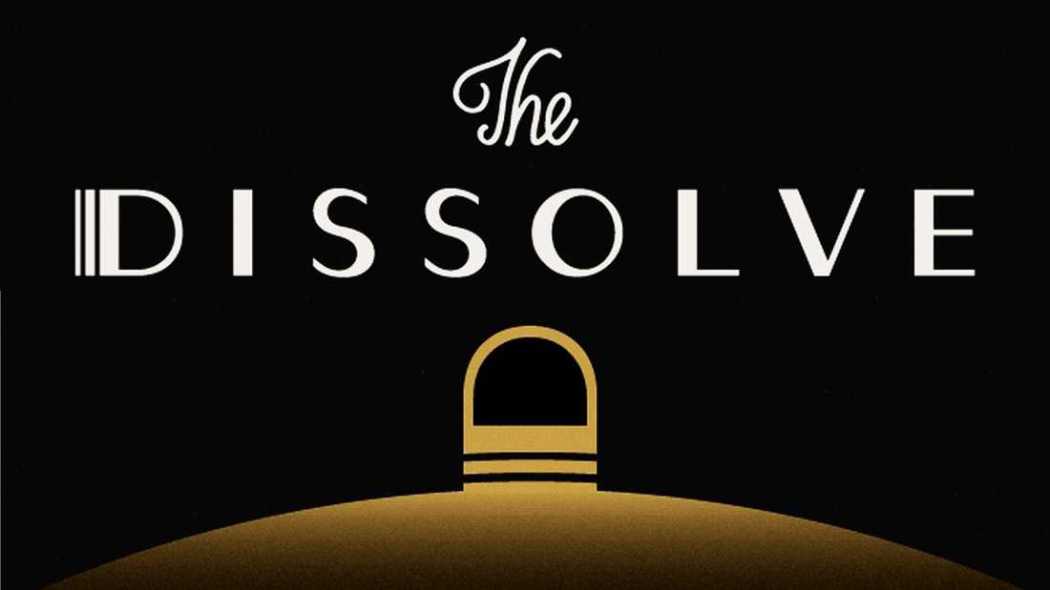 "The Next Transition: The Bright But Uncertain Future of Film Criticism": A great essay from Movie Mezzanine's Daniel Carlson.

“Some of the best film criticism being published today follows suit—that is, eschewing the typical constraints of a review and instead opting for the potentially much more rewarding, all-encompassing criticism modeled by the best TV reviewers. Think of Wesley Morris’s stellar essays on ‘Let’s Be Cops’ and ‘Ted 2,’ both of which placed the films in the broader context of the political struggles of the moment and demonstrated how films can show us who we are, who we want to be, and who we wish we weren’t. Or David Ehrlich’s critical (in every sense) assessment of ‘Me and Earl and the Dying Girl,’ which made deft arguments about the film’s use of perspective and style, interwoven with his own experience of caring for a loved one in pain. Or Jessica Ritchey’s examination of gender politics and ‘Jurassic World.’ Or Matt Zoller Seitz’s piece about the contrast between ‘Only Lovers Left Alive’ and our hyperactive, inattentive age. Or Tasha Robinson’s look at Disney’s latest iteration of ‘Cinderella’ and its structural sexism. These and many other such pieces aren’t reviews as we’re used to thinking of them, but powerful works of criticism that look at any and all aspects of a movie and examine their artistic meaning and cultural impact.This is the future of film criticism: deep, meaningful essays that aren’t afraid of spoilers and that blend aesthetic investigations with social reflections.” 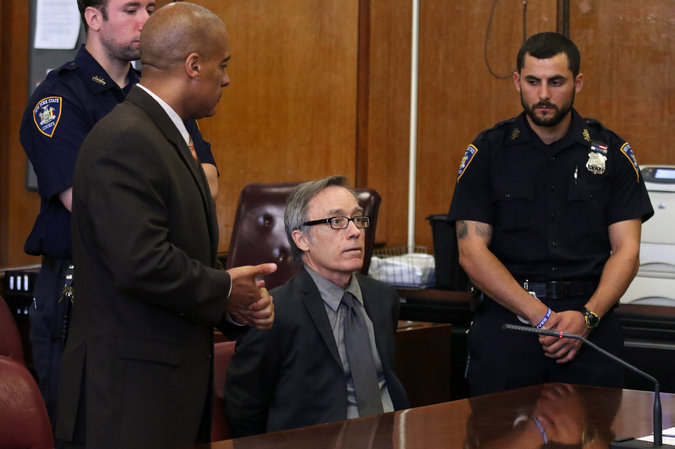 "Filmmaker Joe Gibbons Gets a Year in Prison for a Robbery He Called Performance Art": A fascinating report from Noah Remnick at The New York Times.

“Mr. Gibbons, a former lecturer in art at the Massachusetts Institute of Technology, was sentenced on Monday to one year in prison after he pleaded guilty in State Supreme Court in Manhattan to third-degree felony robbery for entering a Capital One Bank in Chinatown this past New Year’s Eve, stealing $1,002 and filming it all on a pocket-size pink and silver video camera. He claimed it was an act of performance art coupled with dire financial straits. Mr. Gibbons, 61, is something of a cult figure in the performance art world: His work, mostly film installations, has appeared four times in the Whitney Biennial and is in the collections of the Museum of Modern Art and the Centre Pompidou in Paris. His M.I.T. profile cites his predilection for exploring ‘the boundaries between fact and fiction.’ And yet Mr. Gibbons, as a bank robber, had all the skill of Woody Allen in ‘Take the Money and Run.’ In Chinatown, he handed the bank teller a note reading: ‘THIS IS A ROBBERY. LARGE BILLS. NO DYE PACKS / NO GPS.’ The bank teller, Mr. Gibbons said, gave him small-denomination bills and an exploding dye pack that burst as he dashed away. The police officers who then pursued Mr. Gibbons did so in earnest and without any thought to a potential act of performance art.” 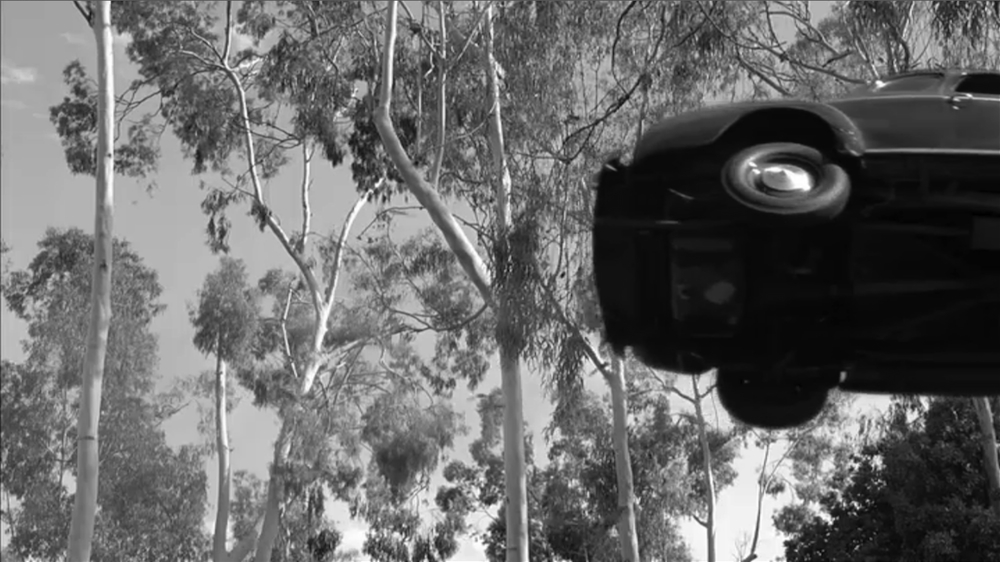 At Indie Outlook, I've posted a gallery sampling some of my favorite images from the extraordinary career of cinematographer Roger Deakins.