"What you need to know about the situation in Turkey." Far-Flung Correspondents returns with an analysis by Omer N. Mozzafar, aimed at readers who have tried to follow the Turkish protests and the government's crackdown, but don't quite understand the players, the context, or what's at stake.

"As we edge into July, what can we observe?  This is not a battle between Secularists and Islamists.  This is no longer a conflict (if it truly was) between Socialists and Capitalists.  Right now, this is a battle for Free Expression against Police enforcement.  These are young people previously thought to be apathetic, now demanding attention.  They are secular in their politics, yet far more respectful of religious observance and symbols than we might assume. Still, the protest seems to fall into the usual pitfalls of directionless resistance against ambiguously identified targets.  Without a clear vision, the government’s challenge, if it chooses to ignore the protesters, is simply to outlast them. " 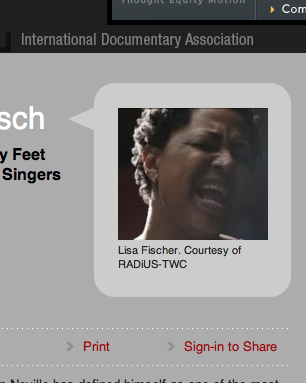 "The genesis of 20 Feet from Stardom, and Neville's participation in it, is a story unto itself. The reason this film even exists, Neville acknowledges, is due to the film's producer, Gil Friesen, former president of A&M Records from 1977 to 1990. 'Gil told me when we first met what his inspiration was for the film,' Neville recalls. 'He had gone to a Leonard Cohen concert with his wife, and beforehand had smoked a good joint and spent the whole concert fixated on the three backup singers at the front of the stage, wondering, 'What's their story?'" 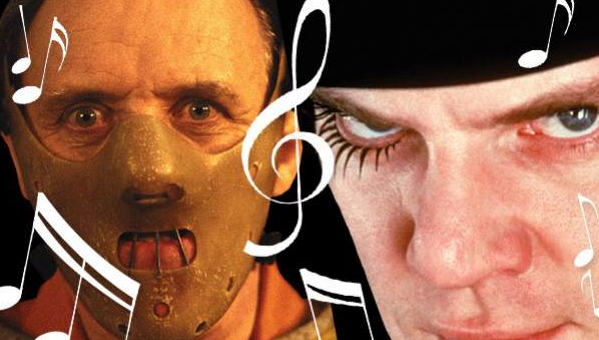 "New Classical Music Suggestions for Hollywood Villains." By Justin M. Davidson, for Vulture. A list of suggestions to help filmmakers as they choose theme music for their effete, sadistic bad guys.

"Screenwriters and music supervisors have a foolproof mechanism for underscoring a bad guy’s evil genius: classical music. Often, it’s a few well-placed bars of “O fortuna” from Carl Orff’s manically apocalyptic choral cantata Carmina Burana laid over juicy, deranged onscreen mayhem (never mind that the text is actually a thirteenth-century Latin whine about the vagaries of fate — a depressive medieval monk’s version of “Luck Be a Lady Tonight”). Sometimes it’s the old Wagner chestnut “Ride of the Valkyries” from Die Walküre, better known as the helicopter attack music in Francis Ford Coppola’s Apocalypse Now. But usually it’s Beethoven. Malcolm McDowell and his droogs turn Symphony No. 9 into "Ode to Rape" in A Clockwork Orange. Gary Oldman professes his love for the composer while shooting people in The Professional. And in White House Down, Beethoven's Fifth is used to indicate that a hacker isn’t just a hacker — he’s an erudite hacker. Carmina Burana should be retired from popular culture entirely (especially from movie trailers) and, with White House Down, Hollywood's allotment of Beethoven has been used up. So what are moviemakers to do when a bad guy needs his onscreen badness amped up with some appropriate classical music?" 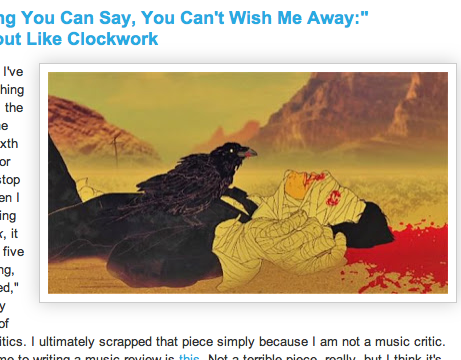 "There's Nothing You Can Say, You Can't Wish Me Away: Something About Like Clockwork." For The Extended Cut, RogerEbert.com contributor Simon Abrams writes about Like Clockwork, the Queens of the Stone Age's long-awaited sixth album. "Despite minor reservations, I can't stop listening to it," he says.

"The lyrics of 'If I Had a Tail' are a slick-sounding jumble. This is probably why Homme's song never attain the status of James Murphy's 'Losing My Edge,' though they're both great tracks about the singer's encroaching fear of irrelevance. Homme warbles, 'I'm machine, I'm obsolete in the land of the free, lobotomy.' He's not sneering at the same decibel level of, 'I'm Designer,' Era Vulgaris's klaxon-loud anti-consumer screed, nor is he cooing as petulantly as he did on, 'Burn the Witch,' Lullabies to Paralyze's anti-press machine jeer. Instead, Homme's resigned to his fate. When he cross-references Patti Labelle with the Crystals in a lyric like, 'Gitchy-gitchy, ooh la la, a doo run run, you won't get far,' Homme's trying to reassure you, the listener, and only you. It's like he's winking from behind cheap plastic sunglasses: 'We're good, man, numb, set. Let's ride.'" 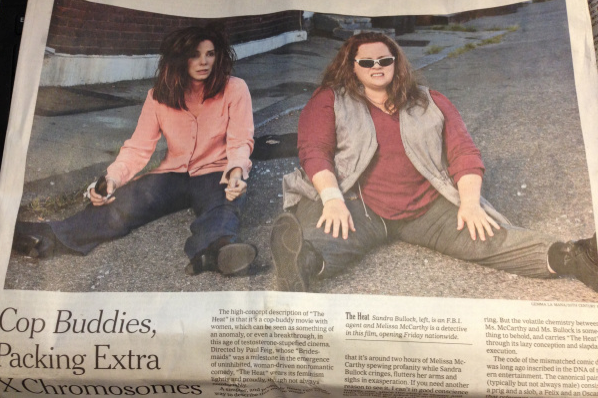 "Guess Which Critic Wrote the New York Times review of The Heat? No Googling!" Drew Grant of The New York Observer noticed that the paper accidentally published the review with no byline, and turned it into a game. Sample prose: "Mullins (McCarthy), a tornado of aggression whose favorite idioms are both anatomically precise and anatomically impossible, terrorizes suspects and supervisors alike.” “(Surgery, oddly enough, is not as funny as scatology.)” "A simpler, and probably more relevant, way to describe this movie would be to say that it’s around two hours of Melissa McCarthy spewing profanity while Sandra Bullock cringes, flutters her arms and sighs in exasperation. If you need another reason to see it, I can’t in good conscience supply one…” 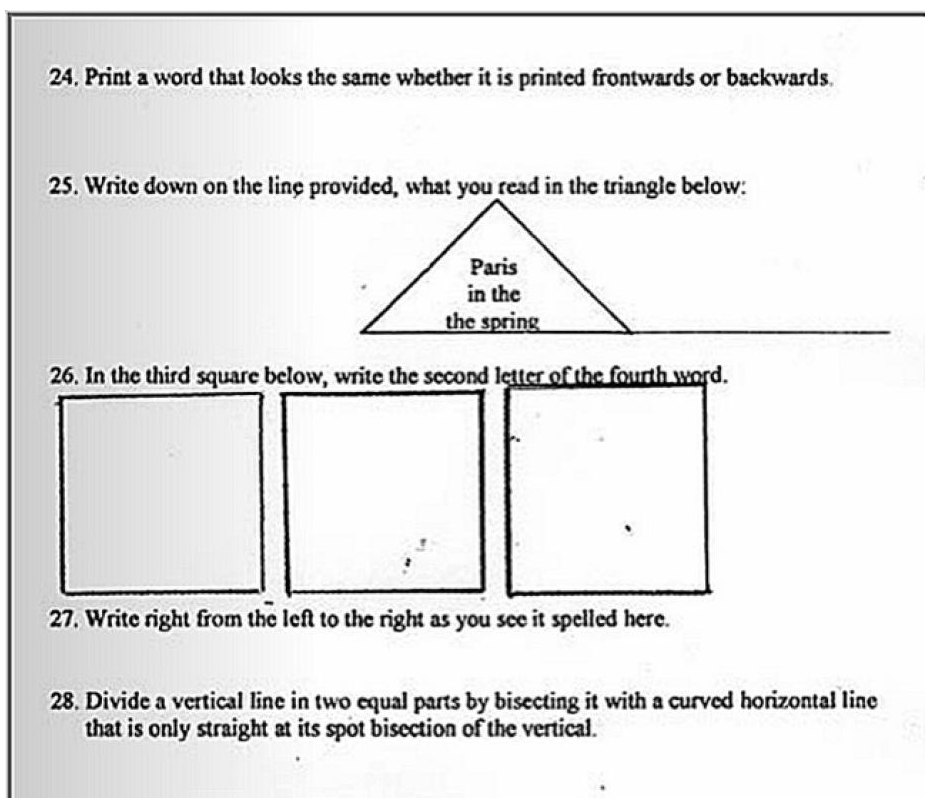 From Slate, "A page from a literacy test—supposedly applicable to both white and black prospective voters who couldn’t prove a certain level of education, but in actuality disproportionately administered to black voters...The website of the Civil Rights Movement Veterans, which collects materials related to civil rights, hosts a few samples of actual literacy tests used in Alabama, Louisiana, and Mississippi during the 1950s and 1960s. In many cases, people working within the movement collected these in order to use them in voter education, which is how we ended up with this documentary evidence." To see more pages, read Rebecca Onion's Slate story here. 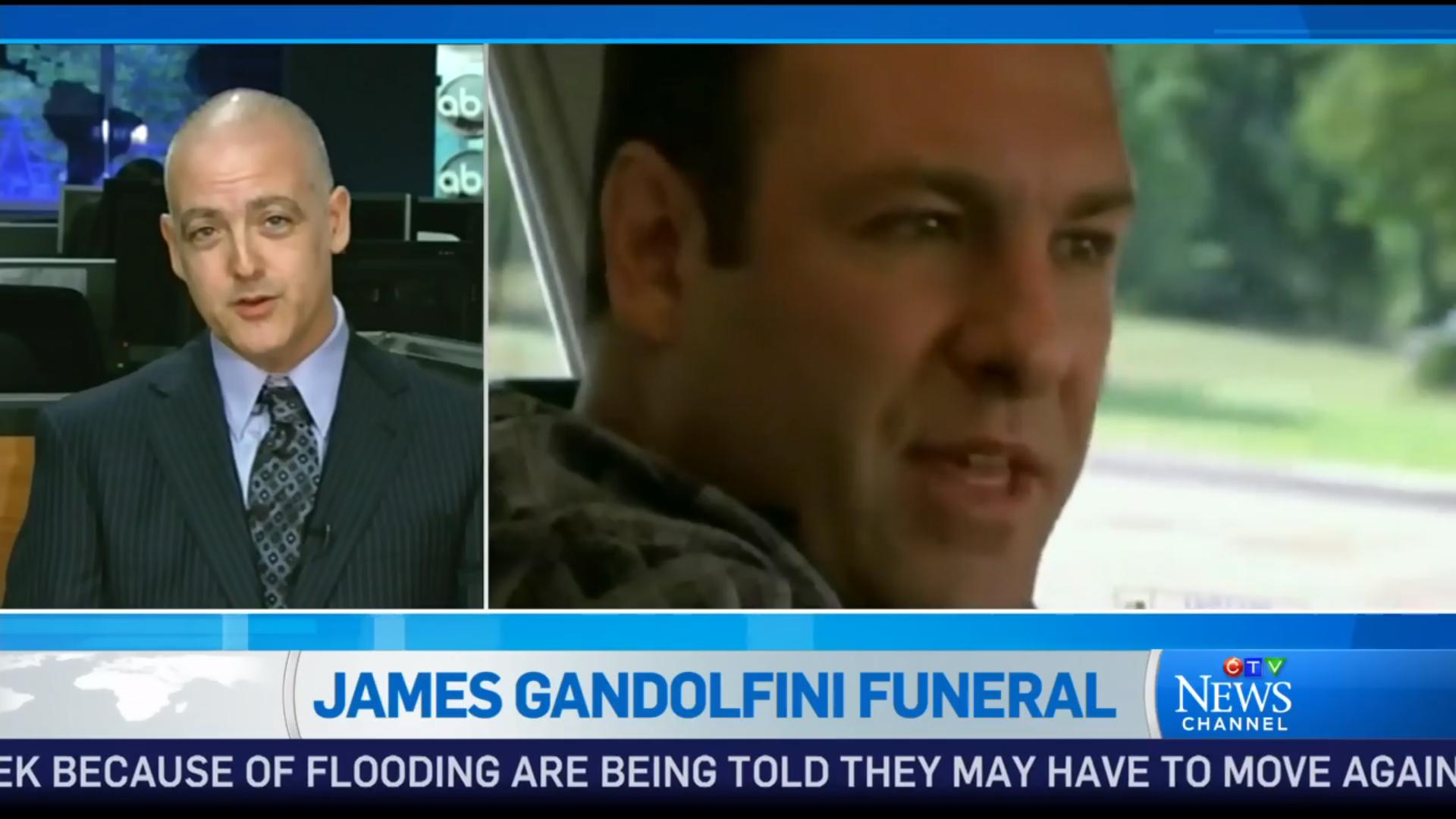 RogerEbert.com editor-in-chief Matt Zoller Seitz talks about the late James Gandolfini's funeral service, in his capacity as New York Magazine's TV critic. Towards the end of the segment he talks about the importance of acting, and why actors shouldn't habitually denigrate their own work by joking about how supposedly trivial it is. Click the link to see.