"25 Emerging Filmmakers to Watch": The staff of Movie Mezzanine lists their picks for the most promising directors in the business, with profile sketches illustrated by our Far Flung Correspondent, Krishna Shenoi.

“To instill fear into the mind of a viewer is no easy task; to do so through minimalism and ambiguity is even harder. Yet, Sean Durkin is one of the few filmmakers working today who recognizes that the most effective way to send chills down audiences’ spines is to offer no clear answers as to what they’re watching and merely hintat the possibility of their worst fears coming true. This is what makes his first and only feature, ‘Martha Marcy May Marlene,’ such a brilliant exercise in psychological terror, and despite the fact that it’s neither a horror film nor much of a thriller, it generates a more foreboding sense of dread than a majority of the most recent entries in either of those genres. … By never fully clarifying whether what’s portrayed on screen is real or a figment of Martha’s imagination, Durkin places the spectator in her unnerving state of paranoia, thereby racketing up both parties’ anxieties in regards to being within the presence of the unknown. It’s a challenging and stunningly assured debut from a director who, if he continues down this path, could very well be the American successor to Michael Haneke, and at the very least, will certainly be one to keep an eye on within the world of independent film.” 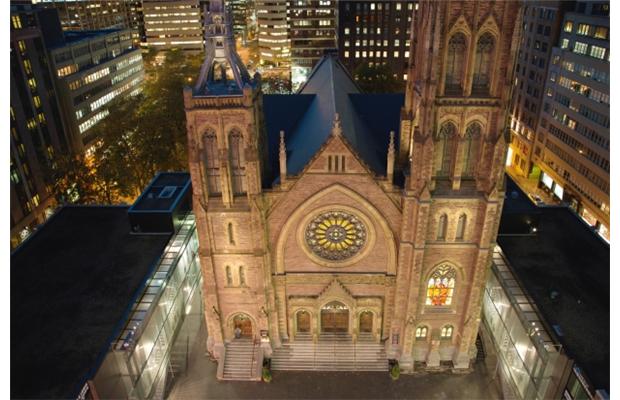 "Homefront: The lantern of Ste-Catherine St.": Another of our Far Flung Correspondents, Olivia Collette, writes beautifully about the lighting makeover of St. James's Church for the Montreal Gazette.

“A classic feature of many churches is the stained glass window, designed mostly to be experienced inside during the daytime. For the St. James, Sampson reversed that conventional effect by making the frontal stained glass windows have an impact on outside viewers, and at night. ‘When we first saw the project, these windows were lit with spotlights directly inside them. So you were getting a very pronounced kind of blot,’ Sampson recalls. ‘We wanted to do something a little different, like a cinema light box.’ To do this, large Lutron screens were installed behind each window. They’re timed to automatically go up during the day and roll down at night. Colour-changing spotlights are aimed at the screen behind the central round window, bouncing off it and creating a pulsating, saturated hue during the evening. With the Rose Window on the right, so named for the image its stained glass illustrates, white light directed at the screen makes for an even backlight that lets the window’s intricate, vibrant design speak for itself.” 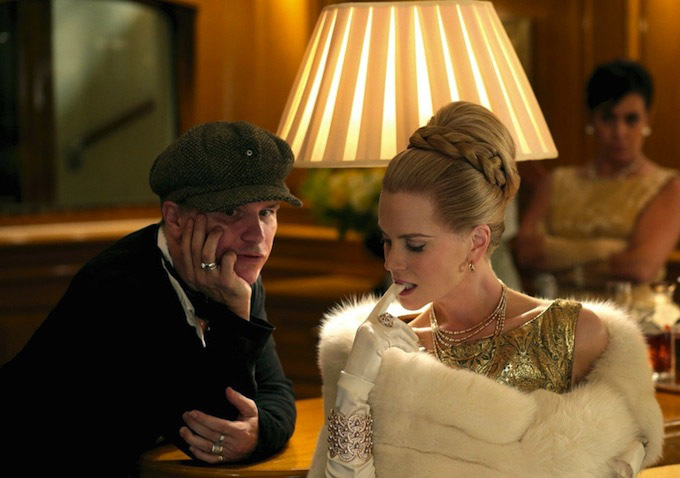 "The 6 Most Unintentionally Hilarious Moments from Cannes Opener 'Grace of Monaco'": Jessica Kiang of IndieWire makes us all feel a little better for having missed the opening night selection on the Riviera.

“Distracting on so many levels, and seemingly designed to eternally remind us that we’re not looking at Grace Kelly but Nicole Kidman, it feels like fully half the film is delivered in vaseline-smeared extreme closeups that wander around Kidman’s face like they’re searching for their car keys. It’s particularly pronounced in one long, long sequence in which Grace is being counselled by Father Tuck (Frank Langella) and the whole time either of them are speaking we’re looking at Kidman’s hairline, or her jawbone, or her eyelashes, or her right nostril or (often) her tear-streaked cheek. It has a woozy, discombobulating effect that ends up paradoxically putting us at even greater distance from Kelly’s presumed inner turmoil as we get hung up on things like the white of her eye (bloodshot) and the quality of her dye job (good) and just how utterly and completely different Nicole Kidman looks in every respect from Grace Kelly.” 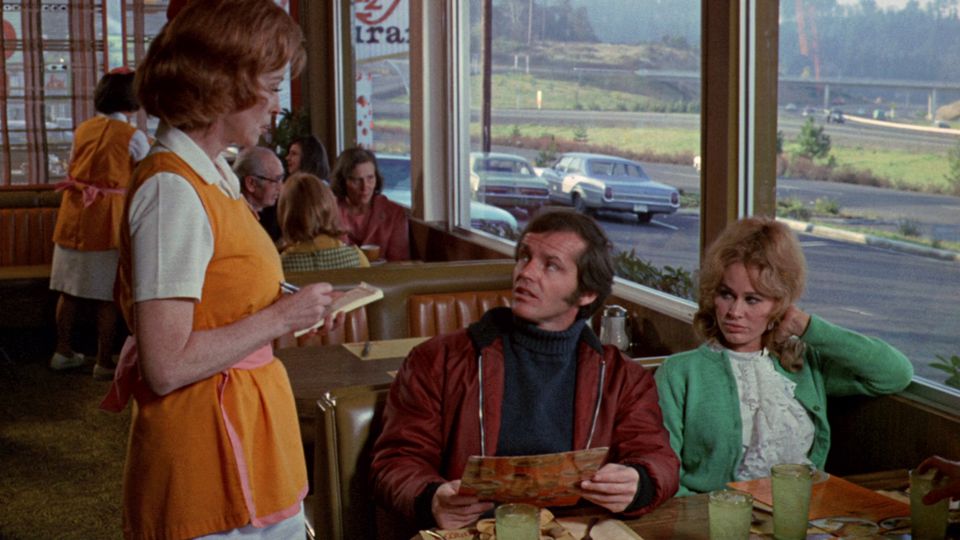 "How the structure of restaurants breeds rebellion": Charlie Hopper's marvelous article for The A.V. Club explores the temper-testing atmosphere of movie restaurants while paying particular attention to Jack Nicholson's infamous verbal duel with the waitress in "Five Easy Pieces."

“Restaurants are a precarious business. People often show up to consume food in a rush, and are easily disgusted if the service doesn’t meet their exact expectations—even minor miscalculations can turn into loud complaints. If the atmosphere isn’t just right, if the food doesn’t arrive in a reasonable window of time, if other customers’ kids don’t behave, if the music is wrong, if any of a thousand variables becomes a problem, there’s a real risk of losing a customer’s business forever. The operating costs are high, typically, and the management has to trust haphazardly trained employees to prepare a variety of products consistently and quickly, ensuring they’re cheerful enough to handle the physical demands of carrying large trays of food while tolerating the often dehumanizing treatment of inconsiderate customers. Wages are generally so low an American can barely live on them, which frequently results in problems that affect an employee’s performance, including emotional distress. And customers don’t always consider any of these extenuating factors when judging the business.” 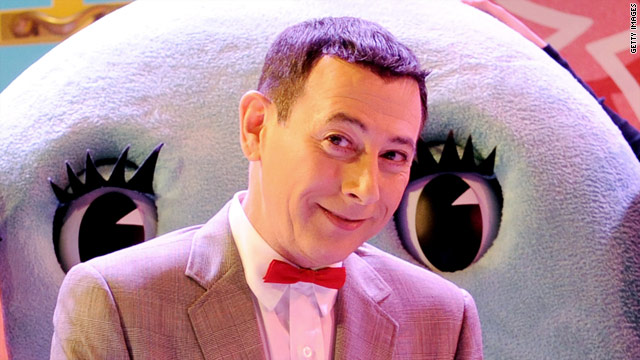 "5 Famous People Whose Best Work Was Motivated By Revenge": Maxwell Yezpitelok pens a typically funny and enlightening piece for Cracked.com.

“So, what inspired Reubens to create this thing that has brought so much joy to so many people? Anger, bitterness, and revenge. According to Pee-Wee himself: ‘The Pee-wee Herman Show was 100 percent created out of spite for not getting Saturday Night Live.’ Keep in mind that in the '70s Reubens hadn't yet fully descended into his Pee-wee persona—that was just a character he did sometimes during his improv routines. After years of obscurity, in 1980 it seemed like Reubens was finally going to get his big break when he was selected as one of the finalists for the new season of ‘Saturday Night Live’ ... but then they turned him down. The worst part wasn't that he got rejected—it's that he got rejected in favor of Gilbert Gottfried.” 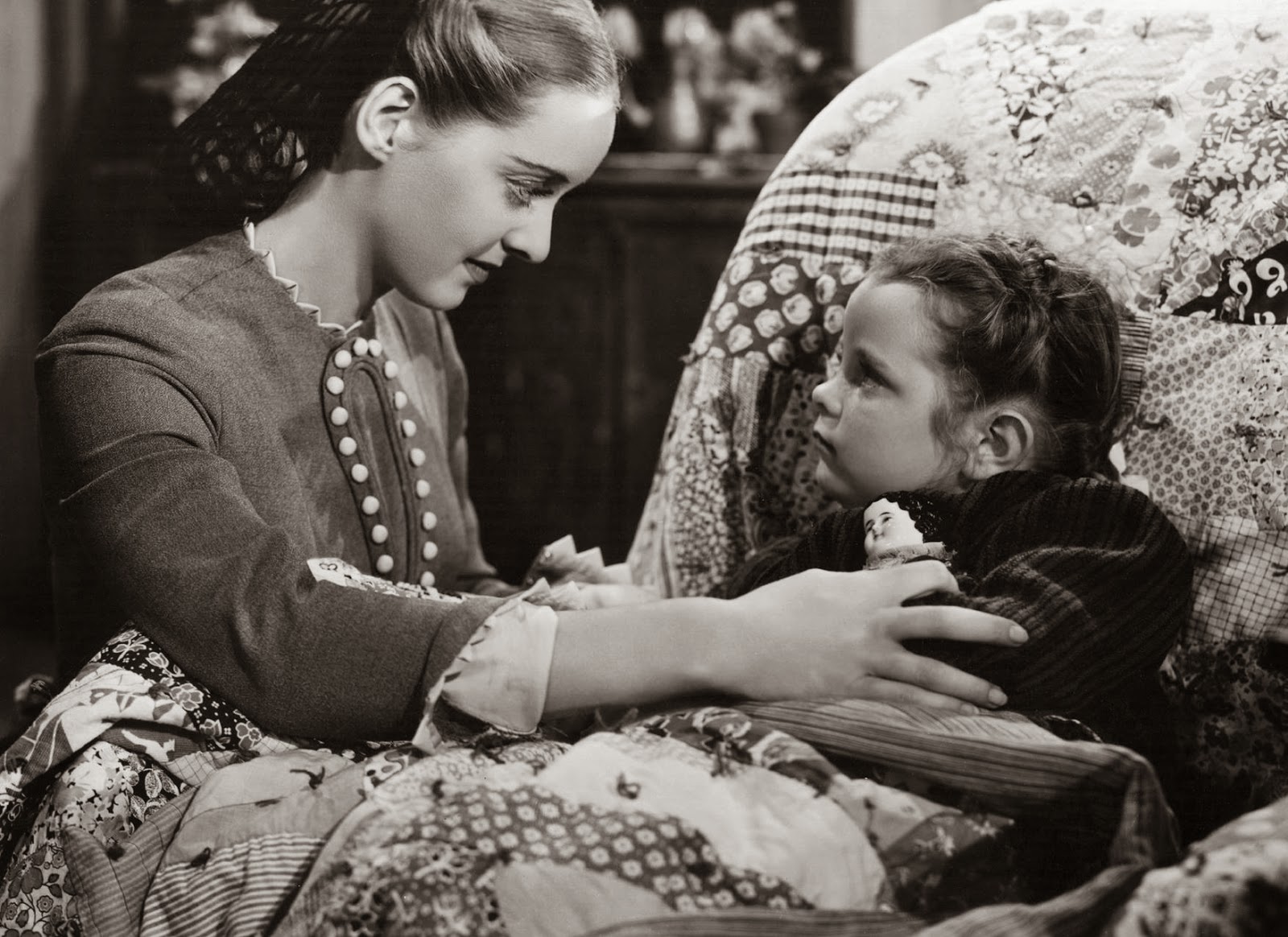 Farran Smith Nehme (a.k.a. "the Siren") provides an enticing preview of her new book "Missing Reels" on her film blog, Self-Styled Siren.

Editor Jim Casey compiles a fascinating array of footage in his three-minute video essay, "The Evolution of Visual Effects (1878-2014)."