“If anything, this latest ‘Cinderella’ does the best job yet of making the most sense out of Charles Perrault’s story. We learn precisely why Cinderella believes in magic (it was instilled in her by her mother), why she chooses to stay with her awful stepmother (she refuses to leave her childhood home), how she became a servant in her own house (she’s selfless to a fault) and why she maintains her courage and kindness (in honor of her mother, who valued those traits above all others). It even gives the stepmother (Cate Blanchett, having a ball) a clearer motivation: she needs the prince to marry one of her daughters in order to pay the debts left by her late husband and preserve her extravagant lifestyle. The ultimate irony is that if she had only treated her stepdaughter as if she were one of her own, then all her problems would’ve been solved. Much of the script’s character depth seems to have been borrowed from Andy Tennant’s wonderful 1998 gem, ‘Ever After,’ which is arguably the most affecting film version of ‘Cinderella’ to date. As in that film, Prince Charming (Richard Madden of ‘Game of Thrones’) and Cinderella (Lily James of ‘Downton Abbey’) meet prior to the ball on not entirely honest terms, though in this case, both characters conceal their true identities from one another. Yet whereas this deception carries great dramatic stakes in Tennant’s film, here it’s shrugged off with the same nonchalance that characterizes the Fairy Godmother played by Helena Bonham Carter, clearly delighting in the chance to perform without a Burton fright wig (interestingly, both Carter and the previous film’s Godmother, Verna Felton, also played the Queen of Hearts, though Felton’s was the one that made me lose my head—with laughter).” 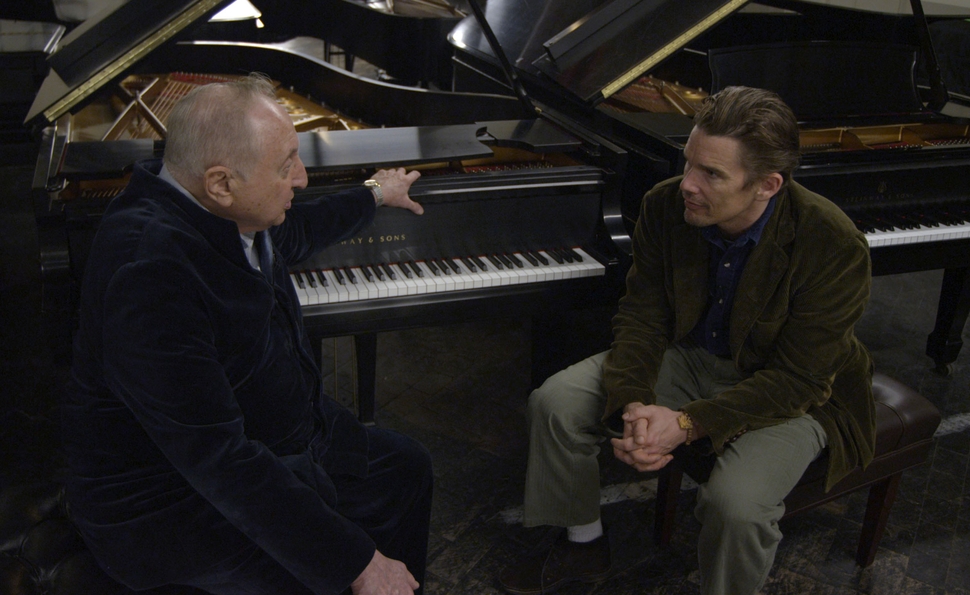 "Ethan Hawke tries to figure it out": Sam Fragoso interviews the four-time Oscar nominee about his new documentary, "Seymour: An Introduction" for The Dissolve.

“One of the things that initially drew me to this was that I knew so little about the world of concert pianists. I didn’t know what a huge part of their lives anxiety is. You get one performance at Carnegie Hall, and it’ll be written about for years. Whereas if I go play Macbeth, I’m going to get to do it 67 times. I don’t get to do it once. There’s so much physical control and mental discipline that goes into doing that, playing those pieces well, that I didn’t understand this stress they’re under. It was fascinating to me. It makes perfect sense, of course, but I’d never thought of it like that.It had been something that was very mysterious to me. I thought the more experience you would have, the more confidence you would have. And in some cases, it’s just not the truth. It’s almost like the more hubris you have, the more confidence you have. It’s easy to be confident in ignorance. But as you start to gain respect for the tradition you’re in, and respect for the audience, respect for people’s time, respect for your art, it becomes daunting. And a young person’s mind is so full of themselves, proving themselves. I remember making my Broadway debut and having not a shred of nerves. I was just so excited and confident. And there I was later on at 40 [Laughs.] and it was just an act of work to get out of my dressing room. I didn’t understand what was happening to me. And when I told Seymour, it made perfect sense to him. This followed a clear logic, and I was not alone. As one feels more and more responsible to their art, it becomes more difficult.” 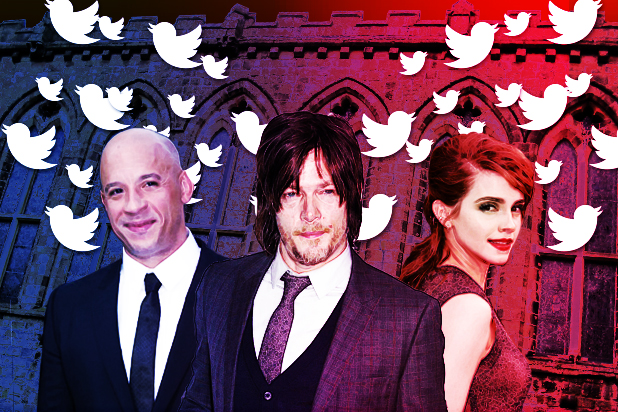 “‘If it came down to two professional actors … we’d go with the one who could get the numbers,’ veteran casting director Mike Fenton tells TheWrap. To make it in Hollywood, it used to be that actors needed five basic essentials: talent, looks, timing, a winning headshot and a good agent. But these days, those looking to score big need to add another item to that list, one that could mean the difference between a lucrative acting gig and the unemployment line: a sizable social media following. ‘There is no question that today if you have good numbers on social media, you have become a better choice to be cast,’ veteran casting director Mike Fenton told TheWrap. ‘It would behoove actors to generate a social media presence.’ As Facebook, Twitter and Instagram permeate every corner of our lives, their impact is also being felt in Hollywood. When it comes to landing that coveted gig, a social media presence is becoming nearly as important as an on-stage one. While casting directors insist it’s talent — not an actor’s online popularity — that matters most, they also acknowledge that, increasingly, performers who have a strong social media following are more likely to get hired than those who don’t. ‘If it came down to two professional actors, one of whom had great visibility in social media and one who was barely recognizable, we’d go with the one who could get the numbers,’ Fenton said.” 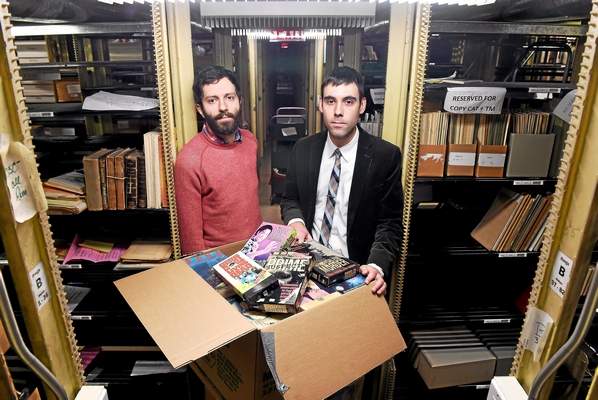 “Yale’s Sterling Memorial Library recently acquired a blockbuster of a collection: 2,700 VHS tapes, most of which are from the horror and exploitation genres. Tucked in the ‘basement backlog’ of Sterling are 45 boxes full of tapes that had their heyday in the late 1970s and early ’80s, said David Gary, a librarian of American history. There’s ‘The Werewolf of Washington’ from 1973, with the iconic horror movie host Elvira on the box. There’s ‘What the Swedish Butler Saw,’ which may best be left unknown. Gary met Aaron Pratt, a doctoral candidate in English, during one of Pratt’s weekly movie nights and the two decided that Video Home System tapes were worth preserving so they started looking for them and amassed about 100. But they knew they had hit the big time when Joe Pesch of Kittering, Ohio, offered to sell his 2,700 tapes. Both Gary and Pratt are from Ohio and during Christmas break, ‘We actually went to the guy’s house … to look at these,’ said Pratt. ‘We had to make sure the collection was what we thought it was.’ It turned out it was just what they’re looking for. ‘The whole collection is horror and exploitation movies,’ said Gary. ‘We had to go kind of genre-specific to make it manageable.’” 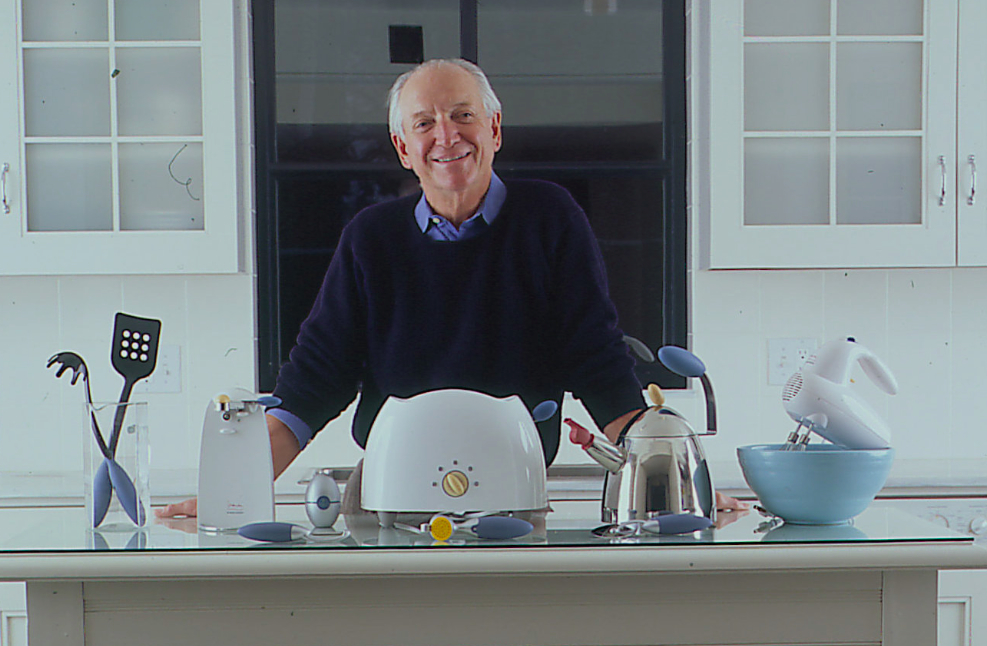 "Michael Graves, Postmodernist Architect Who Designed Towers and Teakettles, Dies at 80": Robin Pogrebin of The New York Times pens an obit to the icon, who passed away yesterday.

“Mr. Graves became among the most celebrated of the postmodernists in the 1980s. ‘He was on top of the heap,’ Mr. Eisenman said. The Portland building, with its hammered-copper Portlandia statues, its rich colors and its classical references, was a standout among corporate buildings. Seen by many as a rejection of — or a welcome departure from — the glass-and-steel Modernist orthodoxy, the Portland building became the centerpiece of the so-called postmodern movement. But by 1985 the backlash against postmodernism had begun, and the rejection of Mr. Graves’s plan for expanding the Whitney Museum of Art’s famed Breuer building was a setback. ‘No Mo Po Mo!’ became the rallying cry of foes of postmodernism. His design would have radically altered the facade of the building, prompting objections from community groups and the city’s Landmarks Preservation Commission. ‘Losing the Whitney — and that fight he had with the neighborhood — took a lot out of him,’ Mr. Eisenman said. ‘He really wanted to build that building.’ Among Mr. Graves’s later projects was the design of scaffolding used for the restoration of the Washington Monument in 2000.” 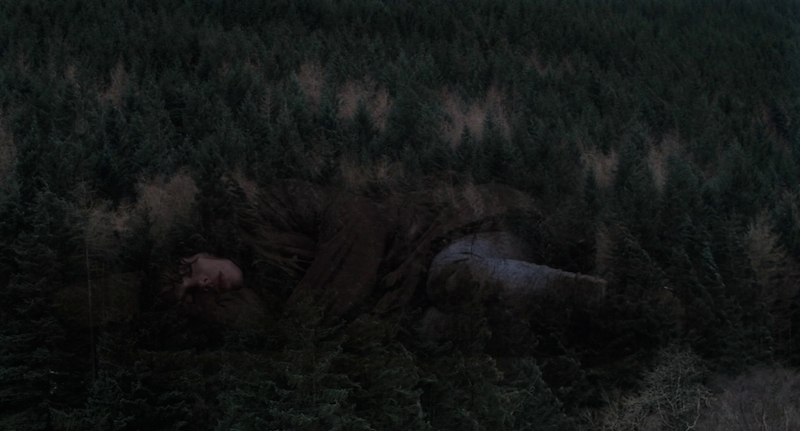 An unforgettable shot from Jonathan Glazer's masterful "Under the Skin," featured in Willow Maclay's must-read essay, "Shine On: Transgender Allegory in 'Under the Skin,'" published at The Vulgar Cinema.

The Dissolve's Charles Bramesco highlights the literally insane trailer for Alamo Drafthouse's rerelease of "Roar," "one of the biggest catastrophes in film history."